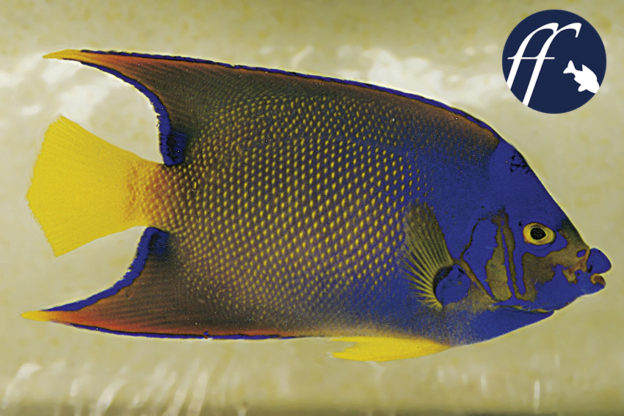 The marine angelfishes are without doubt among the most beautiful of all marine fishes. Six species occur on the western coast of the Atlantic. The discovery there of a new species must rank as a sensation, as the area has been very well explored ichthyologically.

Why would the discovery of a new angelfish be such a sensation?

Perhaps some readers will think that the discovery of a new species of fish is nothing all that unusual. But that is only partially true. As a rule new fish species are discovered either when collections are made in previously unexplored areas or when the living fish becomes well known – numerous new species have been stored in museums for decades but without anyone recognizing them as distinct taxa. By contrast, matters are completely different with the angels. They have been very well studied. H. ciliaris and H. bermudensis are striking and commonplace fishes that were scientifically described as long ago as 1758 and 1876 respectively (the holotype of Angelichthys isabelita Jordan & Rutter 1898 became the neotype of Holacanthus ciliaris bermudensis Goode, 1876; isabelita thus became a junior synonym of ciliaris and the name Angelichthys isabelita added to the official list of names that are unavailable in zoological nomenclature (ICZN, Opinion 2003)). And it took so long for H. bermudensis to be recognized as distinct only because the differences between the two species are so slight. 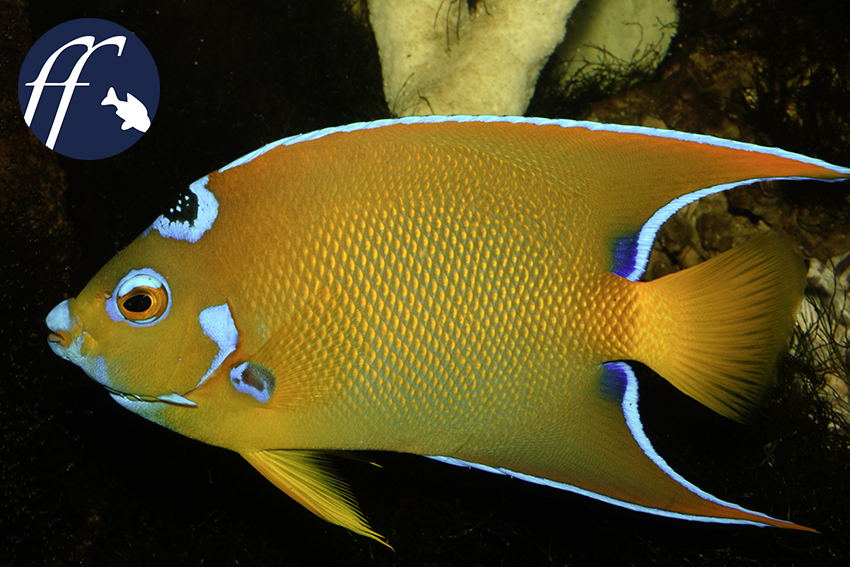 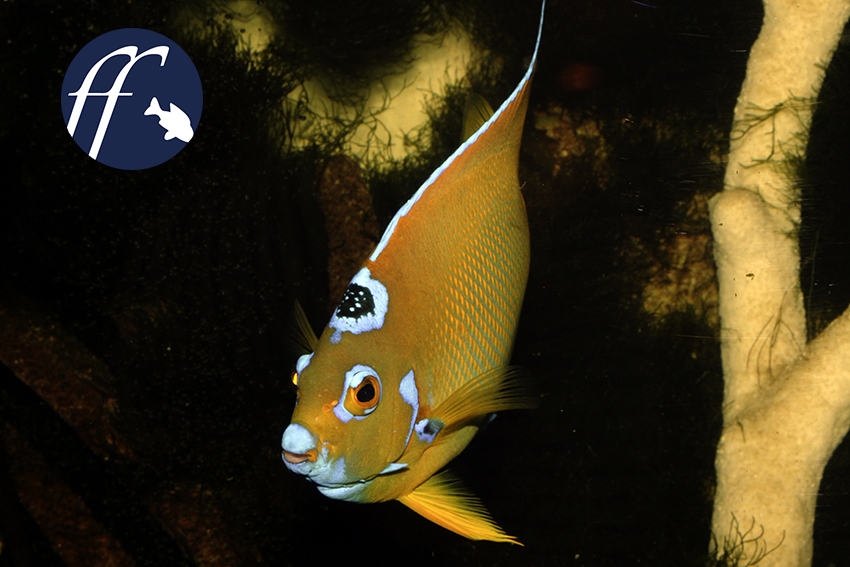 The same individual in frontal view.

Later it was discovered that the two species hybridize (Feddern, 1968). The hybri­ds were sometimes even described as distinct species, e.g. Holacanthus townsendi (Nichols & Mowbray, 1914).

How was the new angelfish discovered?

Luis Gladstone Neto and Hudson Crizanto from Fortaleza in Brazil visited our editorial offices and asked me to identify an angelfish which they said occurred near Fortaleza. It was, however, very rare and only one such angelfish was found among many hundreds of Holacanthus ciliaris. When I looked at the pictures my immediate thought was of hybridization between Holacanthus species: the study of hybrids is a major passion of mine. But this new angelfish, which I will term the Gladstone Angel for the time being, appears not to be a hybrid. Apart from the unusual facial mask and the coloration of the ring around the eye, the markings of the Gladstone Angel correspond almost exactly to those of the Queen Angelfish, H. ciliaris. 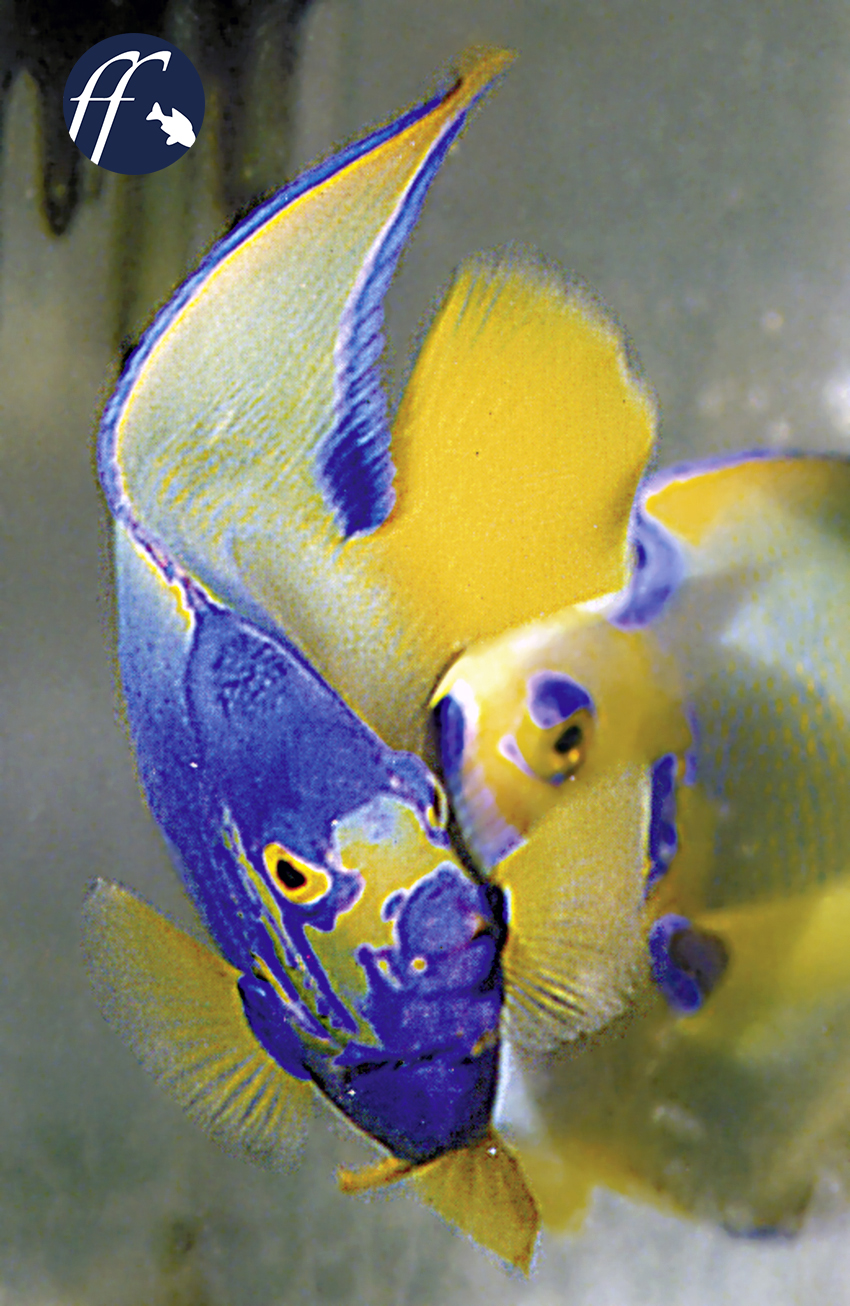 This portrait of the Gladstone Angel (yellow phase) shows the unique facial mask of the fish. 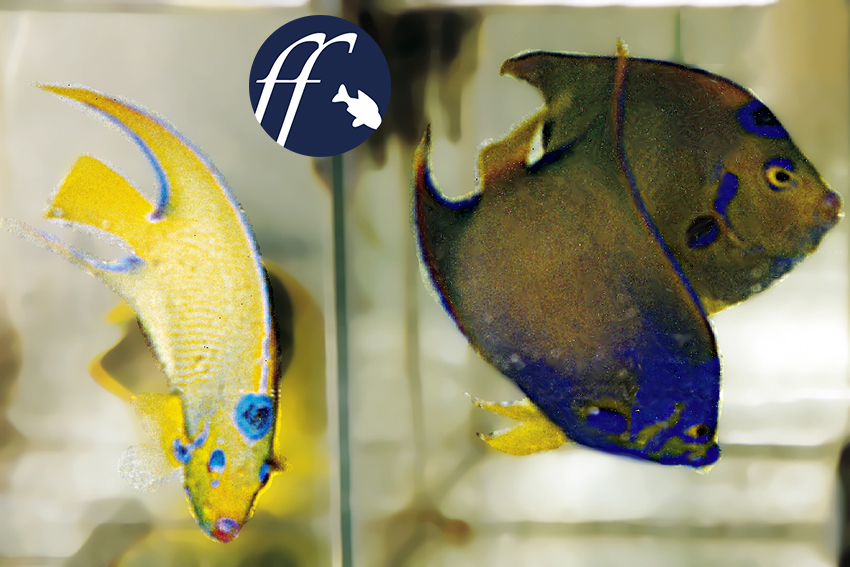 Unfortunately the photo isn’t very good, but it provides a unique record of the three Holacanthus forms from Fortaleza. Left: the yellow phase of H. ciliaris. The fish shows very nicely the species-typical coronet that gave the species its popular name of Queen Angelfish. Right: in the foreground H. sp. “Gladstone”, in the background H. ciliaris; both green-phase individuals.

In addition, just as in the Queen Angelfish, there are two color forms: one with a yellow and one with a green base color on the body. The term for this phenomenon is “color phases”.

So what next regarding the Gladstone Angel?

The next step is to research whether the Gladstone Angel is a hybrid, a color variant, or a new species. But that sort of research work takes time. I was hoping to receive live and preserved specimens of Holacanthus ciliaris and H. sp. “Gladstone” from Fortaleza, in order to be able to answer this open question, but unfortunately so far this hasn’t come to pass. 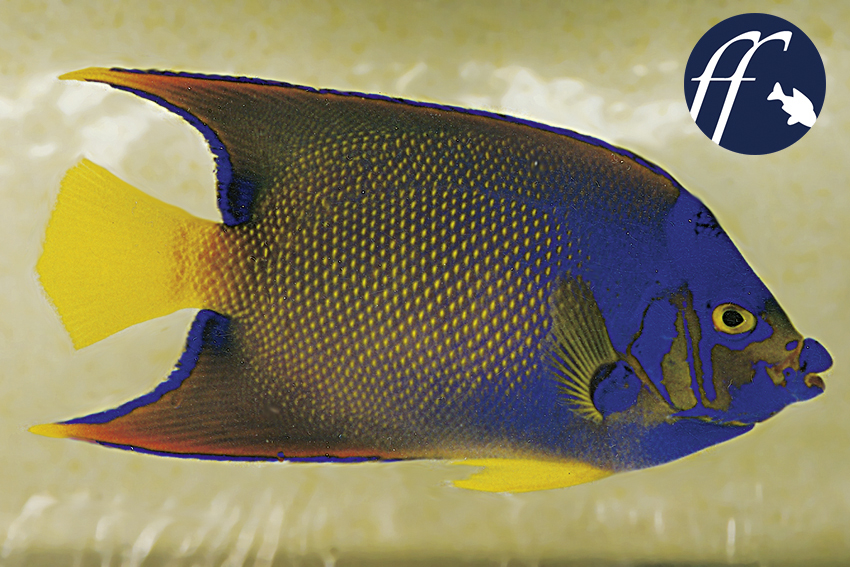 Could El Niño be to blame for all this?

It is possible that the meteorological phenomenon known as El Niño is responsible for the discovery of the new angelfish. Essentially, marine angelfishes don’t practice brood care but simply spawn in the open water. Eggs and larvae then drift away in the ocean currents. 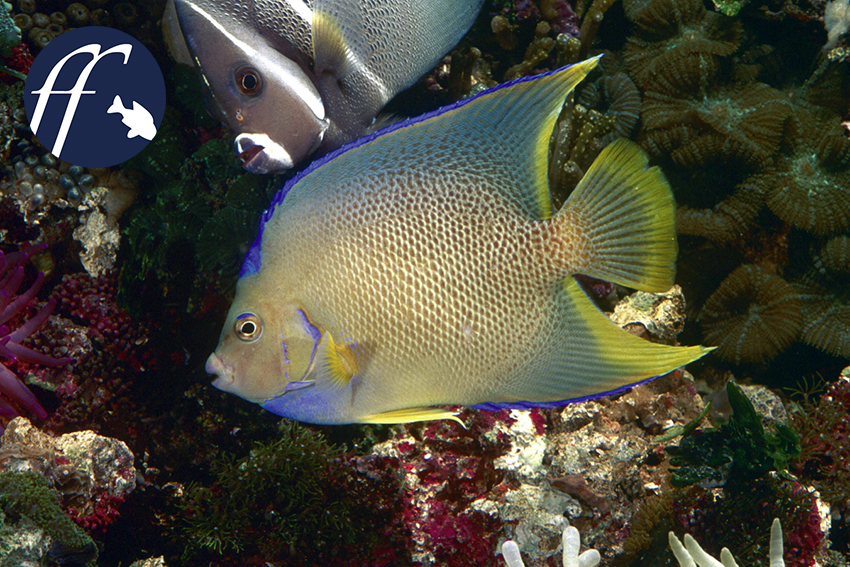 Blue Angelfish, Holacanthus bermudensis. This species is best identified by the caudal-fin coloration (only a yellow edge instead of the extensive yellow of H. ciliaris), but hybrids are very difficult to identify. 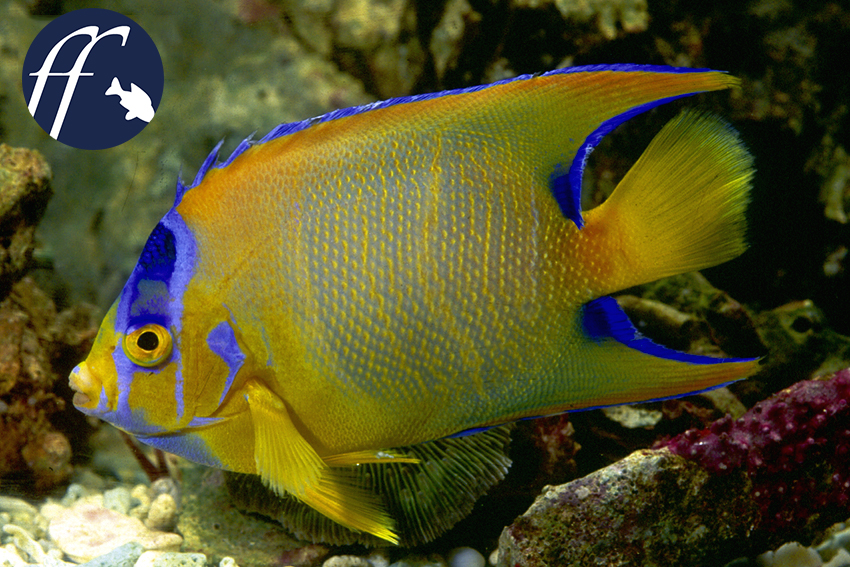 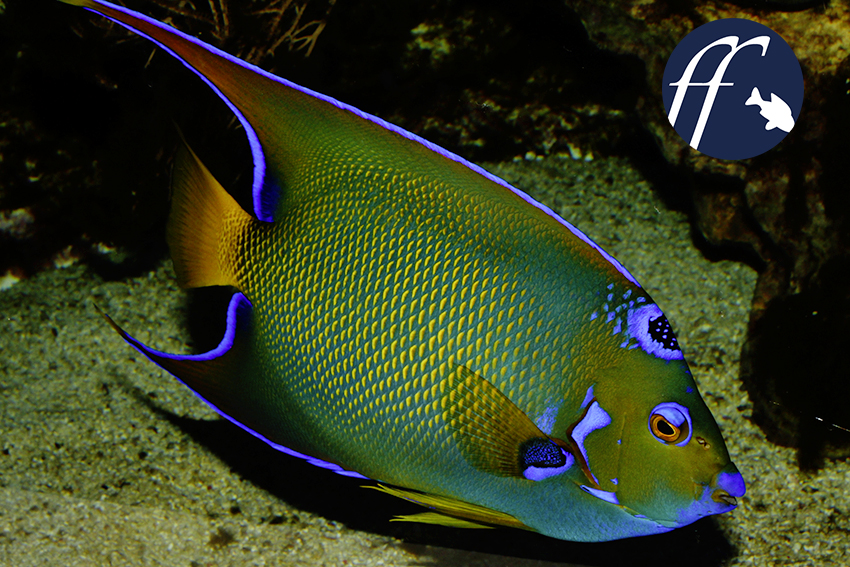 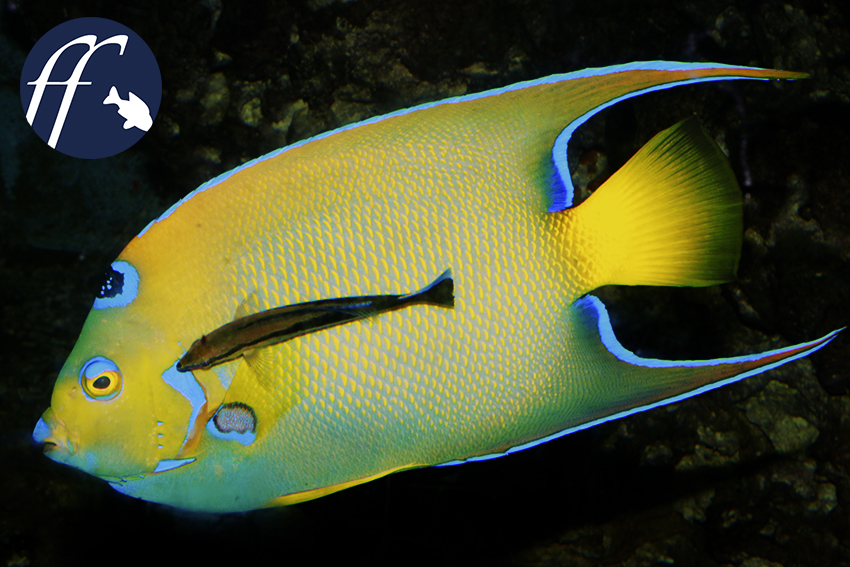 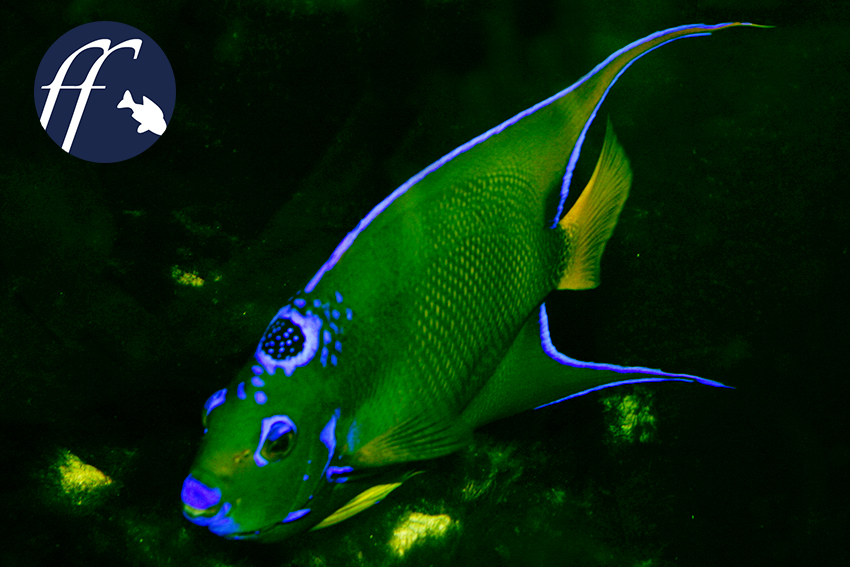 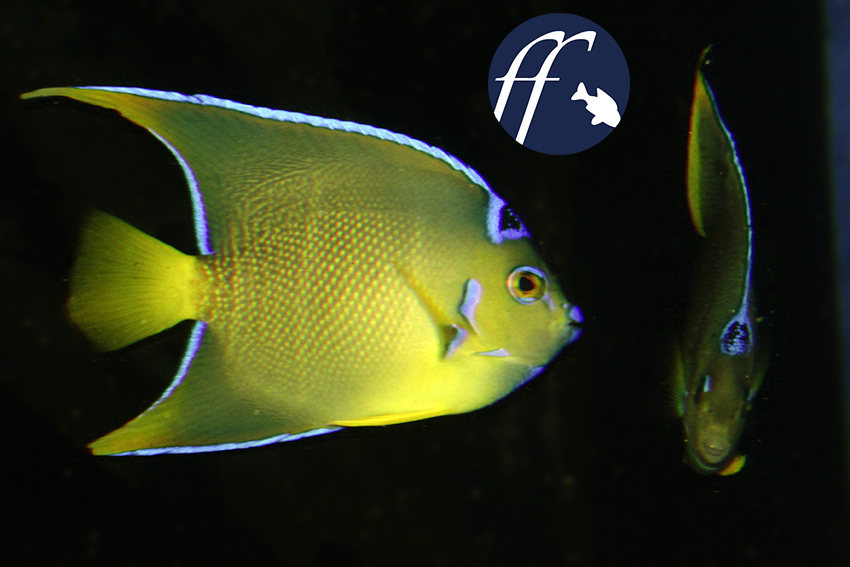 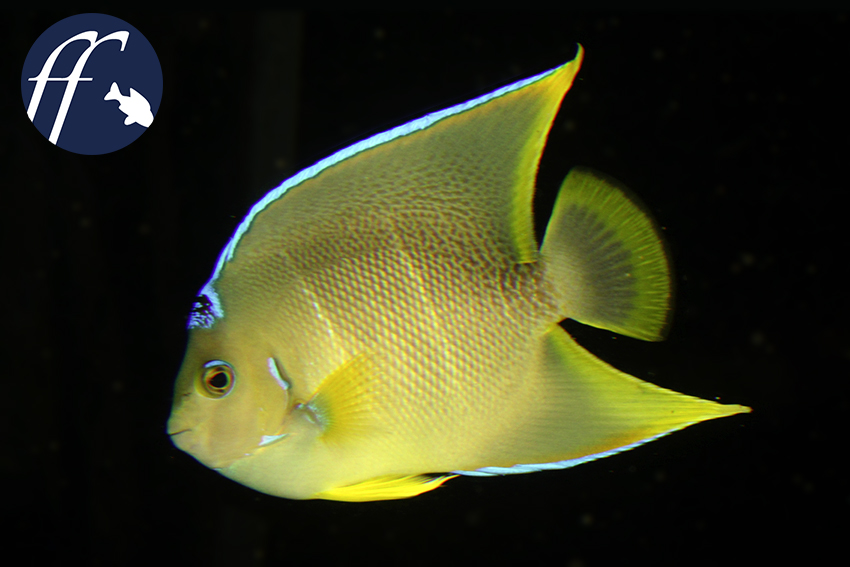 Perhaps the Gladstone Angel was originally a genuinely still undiscovered island form whose eggs and larvae have only now been carried to the Brazilian coast as a result of changes in the ocean currents. But at present this is no more than an unproven hypothesis. It is supported only by the fact that the extremely remote archipelago of St Paul’s Rocks in the Western Atlantic (https://en.wikipedia.org/wiki/Saint_Peter_and_Saint_Paul_Archipelago) is home to populations of Holacanthus ciliaris with really extreme deviations from the norm in both coloration and morphology. There are even pure white and Koi-like blotched individuals there. All are significantly more “beefy” than normal and lack the long, filamentous fin extensions so typical of H. ciliaris . These facts were discovered in 1980 by Roger Lubbock (unfortunately killed in a motoring accident just a year later) and confirmed again recently. The evolution of this subspecies, which has never been formally named, at St Paul’s Rocks has been attributed to inbreeding and an extremely small gene pool, although it isn’t clear precisely how that would work; it would require a mechanism to ensure that the pelagic eggs laid at Saint Paul didn’t drift away to somewhere else in the current and that the young returned to their home rocks following metamorphosis. A truly huge amount of additional research into the matter is required.

Maintaining marine angelfishes in the aquarium

Holacanthus ciliaris can readily be maintained in the aquarium. Although the species, like all large angels, feeds predominantly on sponges in the wild, these fishes very rapidly adapt to the substitute foods offered in the aquarium. In fact H. ciliaris is a real glutton. Campbell (1981) emphasizes the need to provide Holacanthus species with a diet containing at least 50% green foods (algae, spinach, lettuce), in order to avoid otherwise inevitable loss of sight in the absence of vitamin-A synthesis. Because marine angels don’t consume green foods willingly, a lot of ingenuity is required. The best course is to make your own gelatin or agar food for aquarium residents of this type.

Holacanthus ciliaris grows to around 45 cm long and requires a correspondingly large aquarium. While youngsters (and this applies to large angels in general) are very territo­rial and aggressive to match, adults are relatively peaceful fishes – always assuming they have sufficient space, of course.

Additional information on marine angelfishes can be found at https://www.animalbook.de

One thought on “A mysterious new marine angelfish”