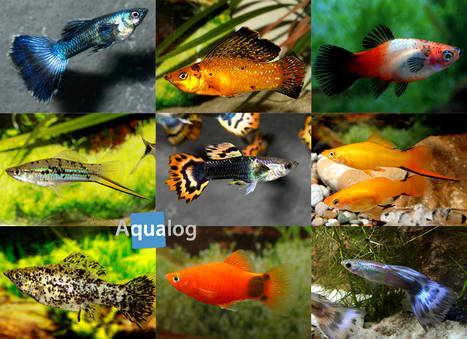 Livebearing toothcarps are small fishes that originate from Central and South America. The smallest species grow to only around 1-2 cm long, the largest 12-15 cm. All produce live young. Males possess a copulatory organ, known as the gonopodium, which is actually a modified fin.

The livebearing toothcarps include some of the most popular ornamental fishes such as the guppies, platies, mollies. and swordtails, which exist in hundreds of different cultivated forms and are found in aquaria all over the world. These four main types actually comprise a total of around 280 wild species, all well suited to maintenance and breeding in the aquarium.

The cultivated forms were domesticated around 100 years ago. They were developed further by crossing species and selective breeding. Many cultivated forms, above all the mollies, can no longer or only partially be assigned to any of the original wild species.

Livebearing toothcarps generally live close to the surface and in social groups. These “shoals” consist of fishes of both sexes and different ages. Some species are found in swampy, standing waters (guppies, platies, some Gambusia), while others are adapted to strong currents (Priapella). The majority of species prefer clear water with a slight to moderate current. Species from Central America usually prefer moderately hard to hard water (10-25° dGH) with a slightly alkaline pH (pH 7.3 – 8.5), while the Amazonian species also occur in extremely soft, acid water (0-4° dGH, pH 4.5 – 5.5). In almost all cases they are able to adapt readily to different water chemistry, and the cultivated forms can be kept and bred in any water suitable to be used as drinking water. A number of wild-caught species that live near the sea in the wild will do better with a moderate addition of common salt (around 5 grams NaCl per 10 litres of water) than without salt.

Temperature requirements differ considerably between individual species. Those from southern South America (Argentina, Paraguay, Uruguay), from higher altitudes (in Bolivia and Mexico), and shady jungle streams in Central America, should not be kept too warm in the long term, with 20-24° C being a good average, 2-3° C higher for breeding, and periodically 2-4 °C lower as well. Species from the open areas of Colombia and Venezuela (the llanos) and the coastal regions of the Guianas and Central America require 26-28 °C and up to 30 °C at breeding time. Amazonian species should be kept at 24-28 °C, with the temperature increased by about 2 °C for breeding. Species from the lowland regions of Central America should be kept at 24-28 °C.

Slight temperature fluctuations within the daily cycle (2-4°C warmer during the day than at night) will in almost all cases correspond to natural conditions and have a very positive effect on the health of the fishes.

Livebearing toothcarps are “pickers”. They target small organisms and graze biocover. A single species (Belonesox) is a specialised piscivore, while mollies and Limia species have a longer gut than the majority of other livebearing toothcarps and require a higher vegetable component in their diet. The overwhelming majority of species are, however, little specialised and can readily be fed on all the usual types of food (flake, granules, frozen and live foods).

Good lighting is important for these fishes, as among other benefits it will encourage the growth of algae, which form an important supplementary food for many species. Food will be taken not only from the water’s surface, but also as it sinks and from the bottom (the water should be no more than 80 cm deep). Live foods are actively hunted. Guppies and Gambusia are used worldwide in the battle against mosquitoes.

Livebearing toothcarps have a high metabolic rate – they eat a lot and excrete a correspondingly large amount. For this reason regular large partial water changes are the most important element of maintenance. Ideally 1/3 – 2/3 of the water should be changed every week, refilling with fresh water of the same chemistry; at the same time the difference in temperature between the new water and the aquarium water should be as small as possible and never more than 2-3 °C. In aquaria with a low fish density, minimal germ population, and good biological filtration, water changes can be reduced to 1/5 of the total volume every 14 days. Longer intervals should not be employed in the long term.

Livebearing toothcarps are generally active swimmers. For the majority of species the tank length should, if possible, be no less than 10-15 times body length (not including the tail) and tank width 5-10 times body length. The depth of the aquarium is less important, but will usually be no less than 15 cm and no more than 80. If the aquarium is significantly deeper then it is important to ensure the fishes get enough to eat, as the majority of species won’t go any deeper to feed. Exceptions include the Pike Livebearer (Belonesox), which is a very inactive lurking predator. This species – the largest of all the livebearing toothcarps – requires the smallest aquarium relative to its size, as it hardly swims around at all.

Almost all species are best maintained in large groups of 15-30 individuals. The mix of the sexes is of secondary importance, but there should be no fewer than five males, as otherwise one may become dominant and behave very aggressively towards conspecifics. Only in the case of the largest swordtails (Xiphophorus hellerii and closely related species) and sailfin mollies (Poecilia velifera and P. latipinna) can the aggression of the dominant male towards other males be so great that often only one sexually mature male can be kept in small and medium-sized aquaria. The huge females of the (rarely maintained) two-spot livebearers (Pseudoxiphophorus or Heterandria of the bimaculata group) often hunt and devour the comparatively small males, so appropriate precautions are required.

Livebearing toothcarps rely on their eyesight and have evolved specialised behaviour in which body colour and fin ornamentation are used for intraspecific communication (usually in the wild species as well). For this reason good aquarium lighting is important. The aquarium should be efficiently filtered so that the water remains clear.

With a few exceptions (some Gambusia, Pseudoxiphophorus), livebearing toothcarps usually mix well with other fish species of similar size and temperament.

The majority of species start to show their age after about three years of life. It is probable that hardly any of the species lives longer than a year in the wild.

Livebearing toothcarps are usually sexually mature after six months at the latest (guppies and other similar-sized species after 10-12 weeks). At this point they will be 1/3 to 1/2 (depending on environmental conditions) of their potential eventual size, and many species are in fact already full grown. Like all fishes, livebearing toothcarps may continue growing throughout their lives. In all species females grow larger than males.

Because of the large number of species and the lack of recognised common names for the rarer forms, it is important to make a note of the scientific name(s) of the species you buy, so that you don’t make mistakes regarding their temperature requirements. Please note the scientific name, the optimal temperature range, the ideal pH value, and the recommended tank size given on the label on the sales aquarium.

In some species (especially swordtails and mollies) there are early- and late-developing males. The latter look like females for a long time and grow very large, while the early-developing males become sexually mature at the age of 10-12 weeks and often attain only a third of the size of the late developers. The difference is genetically determined and has led to the erroneous belief that a sex change from female to male occurs in these fishes. 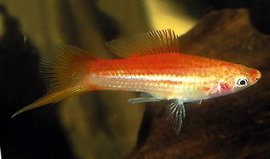 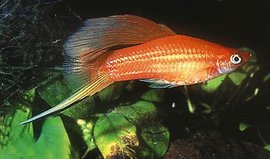 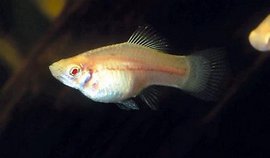 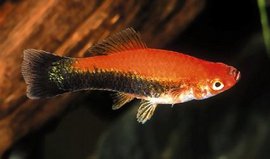 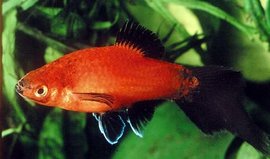 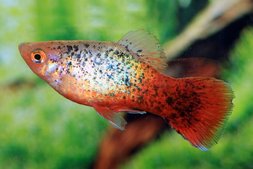 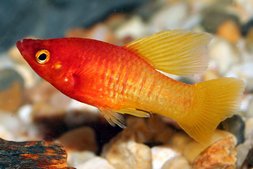 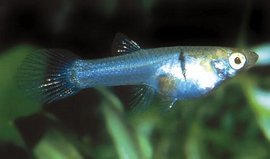 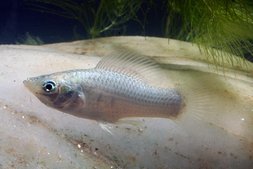 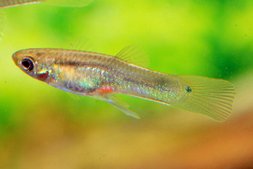 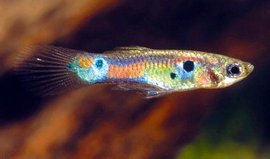 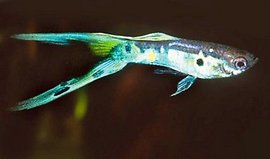 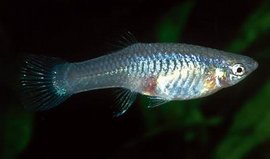 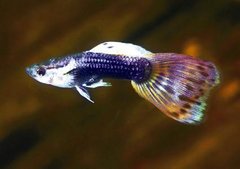