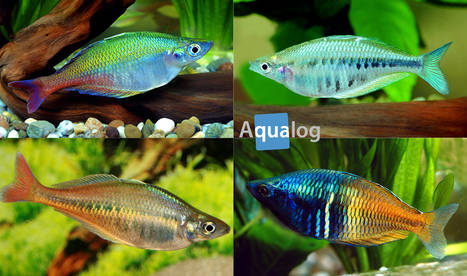 The true rainbowfishes (family Melanotaeniidae) and the closely related blue-eyes (family Pseudomugilidae) originate from Australia and New Guinea. They belong to the Order Atheriniformes (silversides), which includes both freshwater and marine species, the latter being found in seas all over the world. There are some 80 species of rainbowfishes and around 20 species of blue-eyes, and many species have evolved localised colour variants.
Madagascar is home to another closely-related family, the Madagascar rainbowfishes (Bedotiidae) with some 15 species, and finally there are the Celebes rainbowfishes (Telmatherinidae) from the island of Sulawesi, with about another 15 species.
The rainbowfishes are all very colourful shoaling fishes that inhabit rivers and lakes in the wild. Many species and local variants have only a very limited distribution and hence are threatened with extinction due to environmental pollution and biotope destruction. Fortunately all species are easy to keep and breed in the aquarium, so that many species have already been saved from extinction by aquarists.

Rainbowfishes and related species require three things: as much swimming space as possible, clean, unpolluted water, and the company of their own kind. Although many species have had to adapt to soft acid water in the wild, all species are best kept in medium-hard water with a pH between 7 and 8.5. Although this isn’t absolutely necessary for the fishes, it is beneficial for the aquarium to be as brightly lit as possible: on the one hand this will permit the cultivation of the feathery-leaved plants that are very much appreciated by the fishes, and on the other the fishes will exhibit more vivid coloration in brightly-lit aquaria.

All rainbowfishes and related species do very well on a diet of dry, frozen, and live foods. In the wild they feed mainly on insects that have fallen into the water and Aufwuchs (mats of algae and the micro-organisms that live in them). Because of their relatively small mouths rainbowfishes and their relatives cannot consume large morsels of food. When feeding with dry food it is important to use up the contents of container within 4-6 weeks of opening, as otherwise on the one hand important nutritional elements (unsaturated fatty acids and vitamins) may deteriorate and on the other there will be a danger of mildew affecting the food and posing a health risk. If possible dry food should always be stored in a cool, dark, dry place, never warm and/or damp. Light and air will destroy unsaturated fatty acids and vitamins, and damp may cause mildew to grow.

As for all aquarium fishes, regular large partial water changes are the most important element in the maintenance of Rainbowfishes and their relatives. Ideally up to half of the water should be changed every week. The new water should have a similar hardness and pH to that of the aquarium water and be around the same temperature. A temperature difference of 3-4 °C will be tolerated, and the new water should always be cooler, never warmer, than the aquarium water. Secondary plant material (primarily humic acids) will be very beneficial to the health of the fishes, and can be provided using dead leaves (of Sea Almond, Beech, Alder, Oak, Birch, willow), Alder cones, or peat can be utilised, or special liquid preparations added at every water change.

Rainbowfishes and related species are very active swimmers. The larger the aquarium the better. As a general rule of thumb, the aquarium for a small group (5-10 individuals) should be at least 10 times as long and 5 times as wide and deep as the expected eventual size of the occupants.

None of the rainbowfishes or their relatives practises brood care: the eggs are deposited among fine-leaved aquatic plants and left to their own devices. For this reason a number of clumps of aquatic plants, floating plants, etc, should be present in the aquarium. Rocks and bogwood can also form part of the decor, as long as this doesn’t unnecessarily restrict the swimming space available to the fishes. The water temperature for all species can be between 22 and 28 °C.

Rainbowfishes and their relatives are comparatively long-lived fishes that can easily live for several years in the aquarium.

The smallest species of blue-eyes grow to only 3-4 cm long, while the largest rainbowfishes can attain around 20 cm. Rainbowfishes actually grow astonishingly slowly, and many species aren’t full grown for two years.

Juveniles often appear rather colourless in the aquarium store. But you shouldn’t let that put you off, as after a few months in the aquarium they will have grown on well and developed their splendid coloration. Males often indulge in harmless battles among themselves, showing particularly intense colours in the process.

Rainbowfishes are Ideal fishes for the community aquarium, as they are both peaceful and colourful and don’t molest plants. If different species of rainbowfishes are kept together then the result is often unwanted hybridisation. Because many species are threatened with extinction in the wild, conservation of species in the aquarium has an important role to play, and hence only pure-blooded strains should be bred. 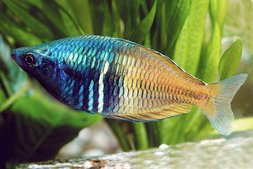 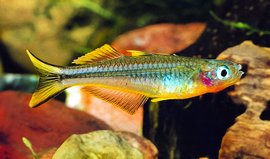 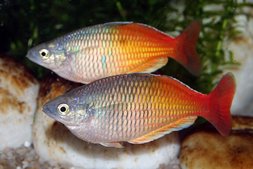 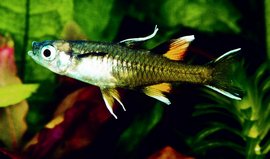 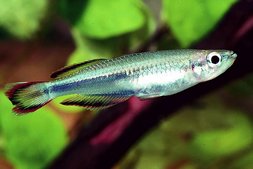 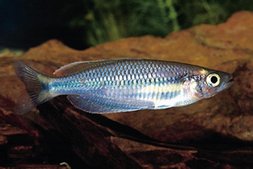 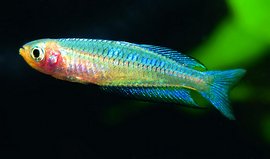 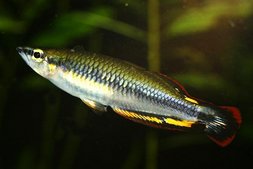 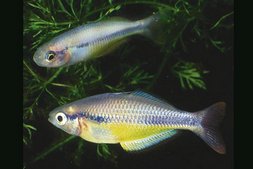 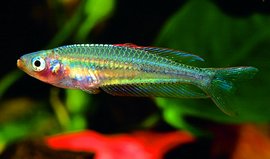 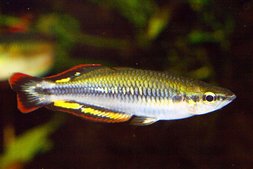 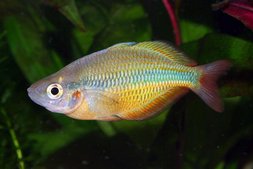 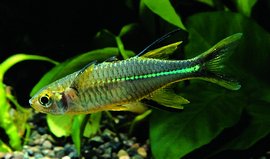 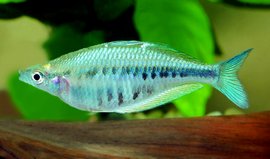 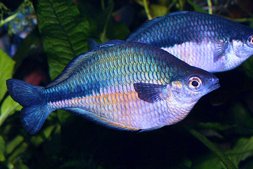