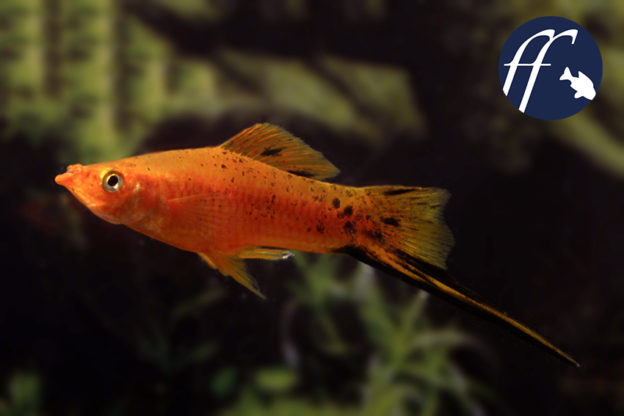 Berlin is the capital of Germany. And was so already back in the 1920s, when the swordtail variety named after it was first bred. Berlin Swordtails are individuals that exhibit irregularly distributed black dots and spots on a usually red background. 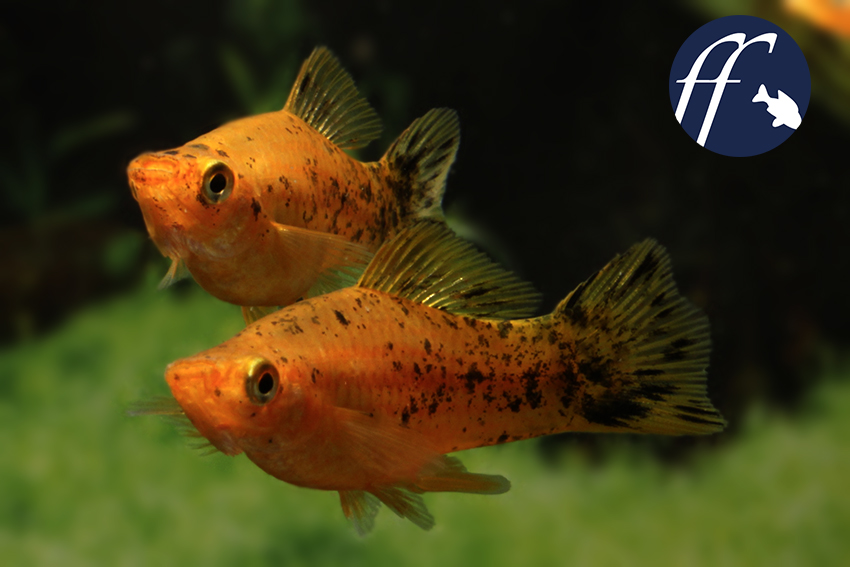 The Berlin Swordtail is a cultivated form that was originally produced by crossing species, and subsequently selectively bred to resemble swordtails in appearance. Black-spotted individuals sometimes occur in red and yellow cultivated strains of the Platy (Xipho­phorus maculatus) as a result of spon­taneous mutation. This color mutation is sex-linked and occurs only in female Platies. Crossing such black-spotted Platy females with red Swordtail males produces hybrids in which males may also exhibit the black spotting. These hybrids – like all crosses between different Xiphophorus species known to date – are intermediate between the parent species. In other words they inherit elements of the appearance of both parents. The hybrid males are larger than normal Platies, but just as high-backed and compressed as the latter. Usually there is hardly any trace to be seen of the sword of the hellerii father. Only through further crossing of the black-spotted hybrid males with red Swordtail females are Berlin Swordtails eventually obtained. 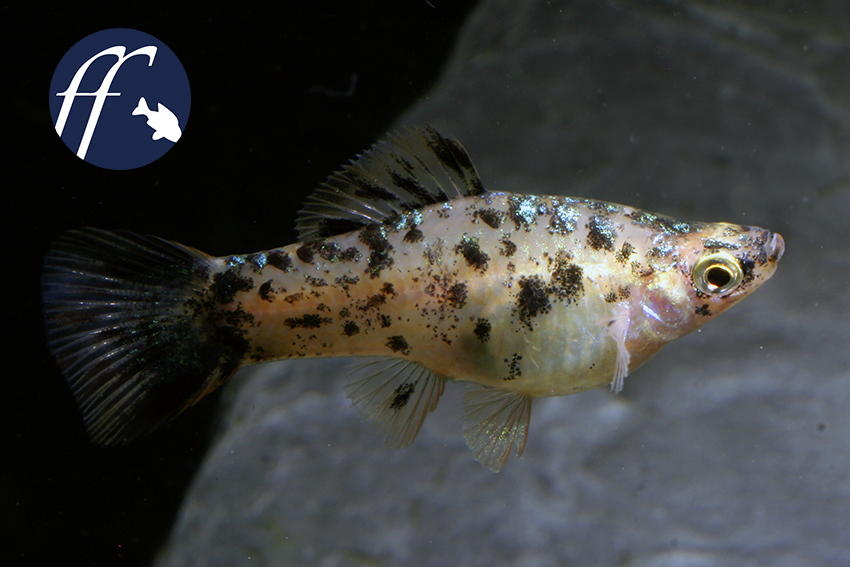 Berlin Swordtails don’t necessarily have to be red – here we see a very pretty white female. Good to see that the black spots on the dorsal region are iridescent as in typical Berlin Swordtails.

Unfortunately it was soon established that the most beautiful specimens with a high percentage of black were unlikely to survive, as they developed cancers from the black pigment cells. What was bad for the fishes was, however, a blessing for Mankind, as these Berlin Swordtails were the first organisms to provide a model for research into cancerous diseases. Innumerable people afflicted with cancer owe their recovery directly to the results of the research performed on Berlin Swordtail strains with pigment-linked cancers. 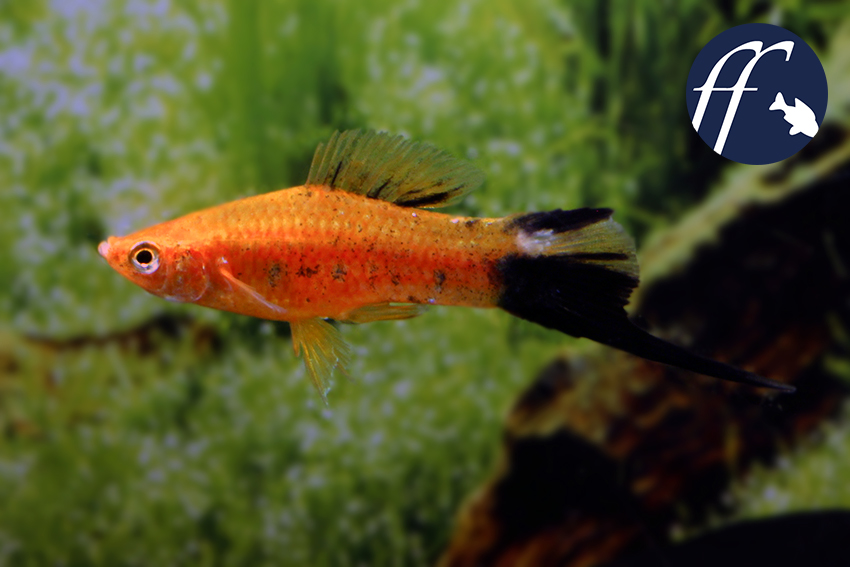 In this male the percentage of black on the caudal fin is worryingly high.

Breeders should, however, avoid breeding specimens with too high a percentage of black, so that the fishes don’t develop any cancers! We owe them that on ethical grounds. In order to avoid the occurrence of pigment-linked cancer, monochrome Swordtails should be crossed into the strain from time to time; red individuals are usually used for this, but there are also very pretty Berlin Swordtails with different background colors. 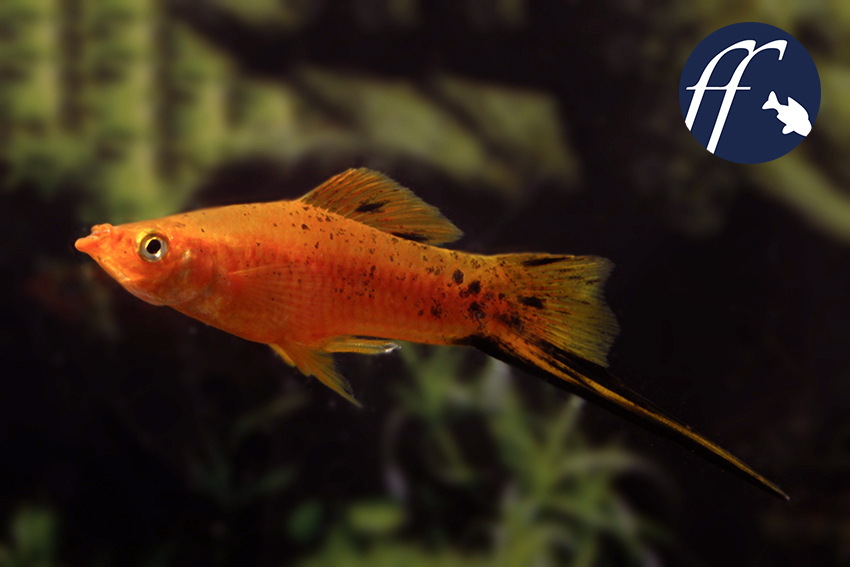 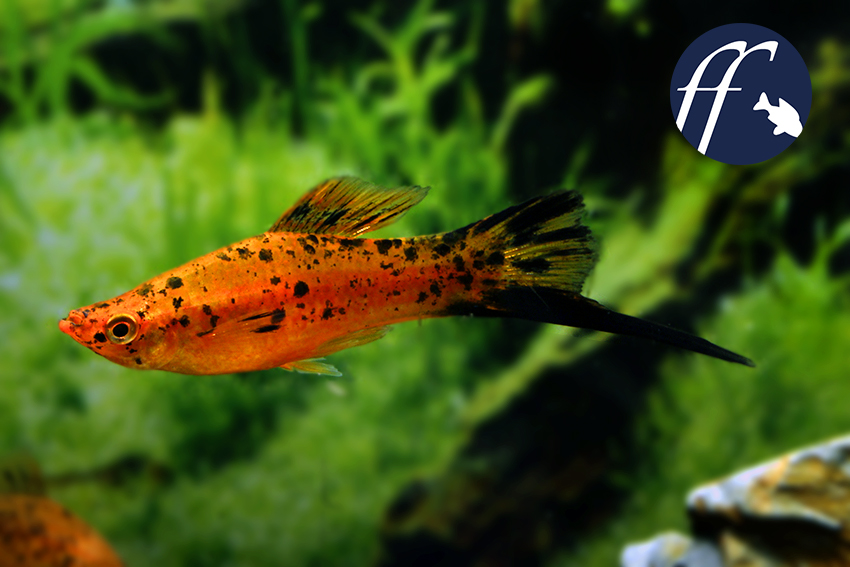 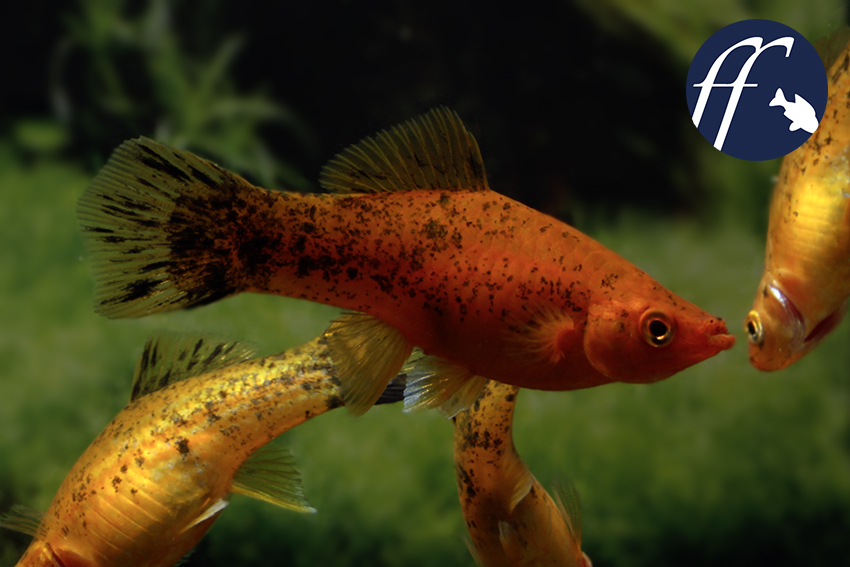 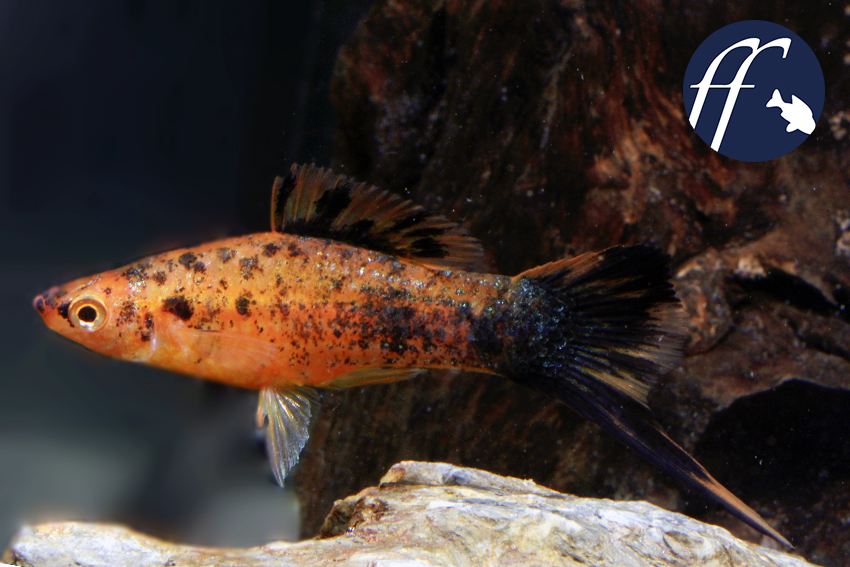 Note that Berlin Swordtails are easily confused with Güntheri Swordtails, and nowadays the two forms are probably also much interbred. Black-spotted Swordtails even exist in the wild. One of the most renowned ichthyologists of all time, Albert Carl Ludwig Gotthilf Günther (1830-1914), was the first to introduce them to science, in 1866. He regarded them as a color variant of the common Swordtails from the Rio Chisoy (Rio Usumacinta drainage) in Guatemala. Somewhat later, in 1896, David Starr Jordan and Barton Warren Evermann described this Swordtail as a distinct species, Xiphophorus guntheri, in their classic work The fishes of North and Central America, on the basis of the description and illustrations of Günther. (Note that they did actually write guntheri and not guentheri, and that the original spelling remains valid for all time!). However, subsequent authors regarded guntheri as no more than a color variant or subspecies of X. hellerii. This issue remains scientifically unresolved to the present day, while aquarium-hobby enthusiasts cheerfully refer to the black-spotted Swordtails as “Güntheris”. 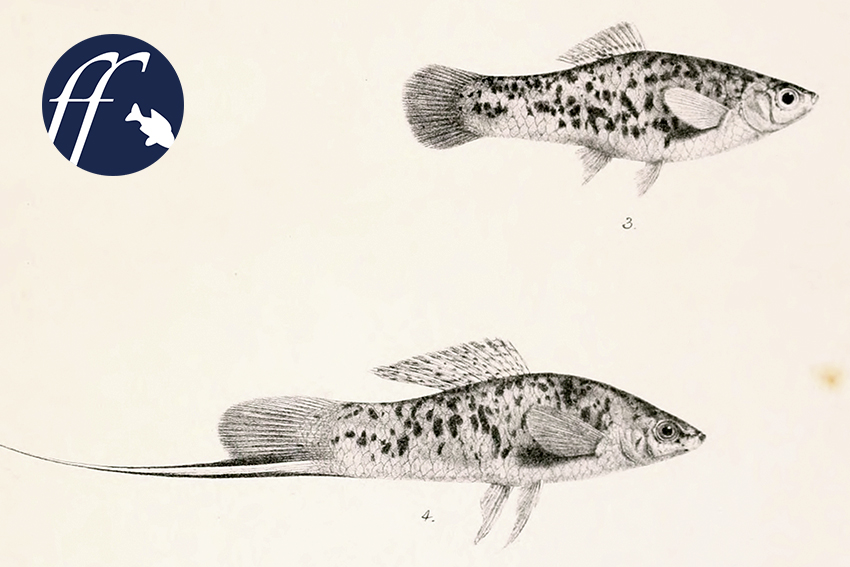 Xiphophorus guntheri was described on the basis of this illustration. 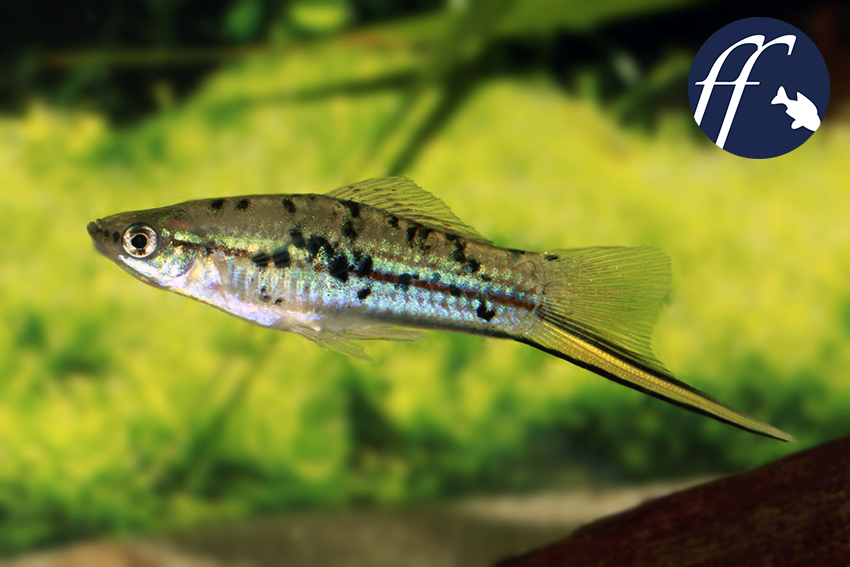 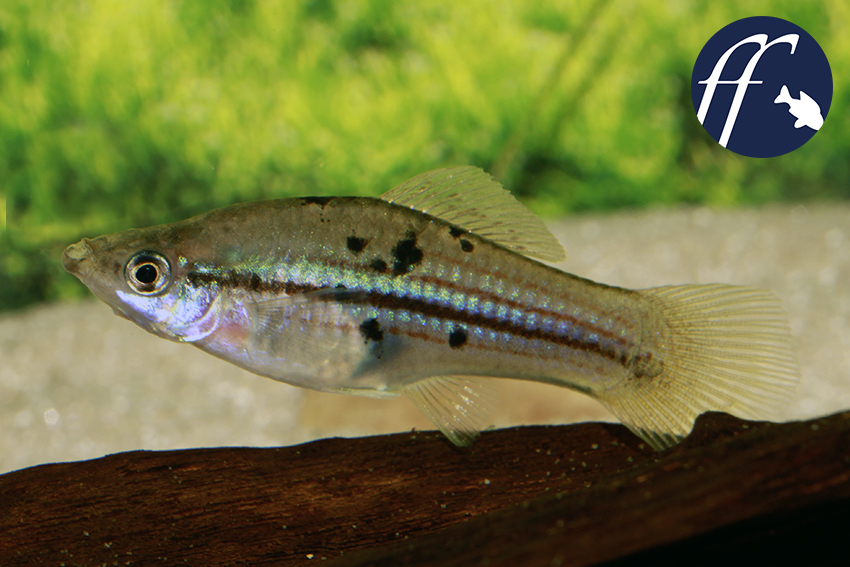 Recently our travels took us back once again to Berlin, which is always worth the trip. And when I am in Berlin, I just have to go to the Zoo. Berlin is known for having two zoos, the former West Berlin City Zoo with its aquarium, and the former East Berlin Friedrichsfelde Animal Park. Both have their own attraction and charm. I love Friedrichsfelde for its fantastic zoological collection: for example, in the pachyderm house there are not only elephants and rhinos to marvel at, but also manatees. More precisely Amazonian Manatees (Trichechus inunguis) living in a gigantic aquarium, as they produce a mountain of muck, which requires a lot of water to dilute it. The manatee tank is also home to innumerable Guppies, very attractive Quetzal Cichlids (Vieja melanura, formerly V. synspila), a number of armored catfishes, and – yep, you guessed – Swordtails! I was particularly pleased to see that the thoughtful curator had included a number of Berlin Swordtails. Not as obvious as you might think, as Berlin Swordtails aren’t available everywhere. And anyone watching the short video on the manatees (filmed in the Berlin animal park, of course) more closely will notice that a Berlin Swordtail male (always the same one, red with a pitch-black tail) makes three cameo appearances – wonderful!

Video title: Manatees and Berlin Swordtails at the “Tierpark Berlin” 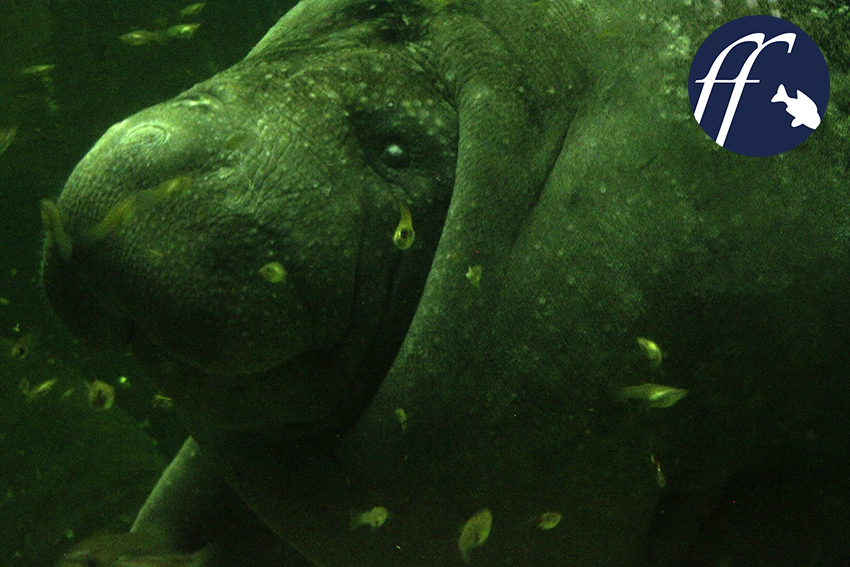 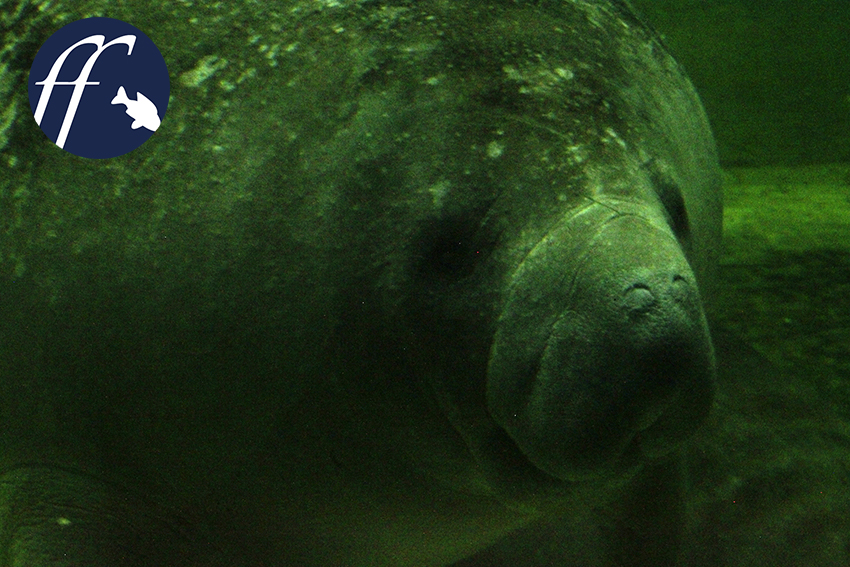 Additional reading material on live-bearing toothcarps can be found at https://www.animalbook.de/navi.php?qs=lebendgeb%E4rende