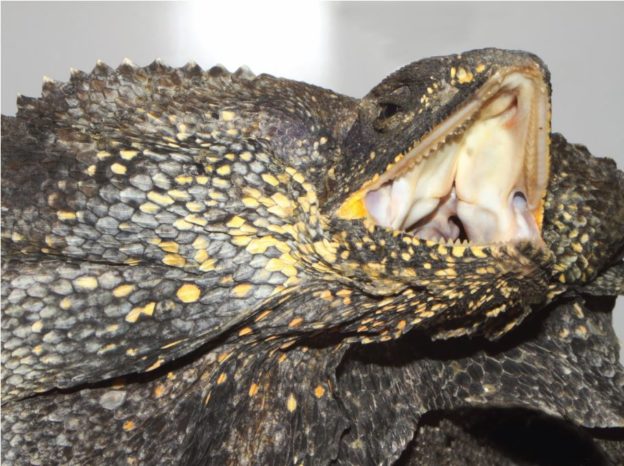 There’s a general ‘rule’ throughout the animal kingdom which, basically, says that the larger the appearance of an individual, the more intimidating it is towards rivals and predators. Witness, for example, how male fish of many species spread their fins when facing rivals in disputes over mates, or territory, or food, or when they, themselves, are faced with the prospect of becoming another animal’s next meal. So…what’s this got to do with the saurian that forms the subject of this article? Quite a lot, in fact. 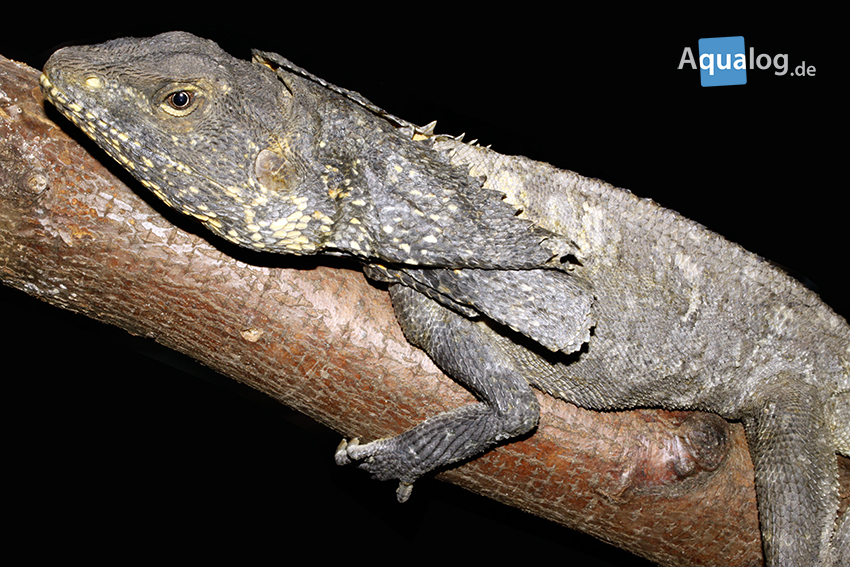 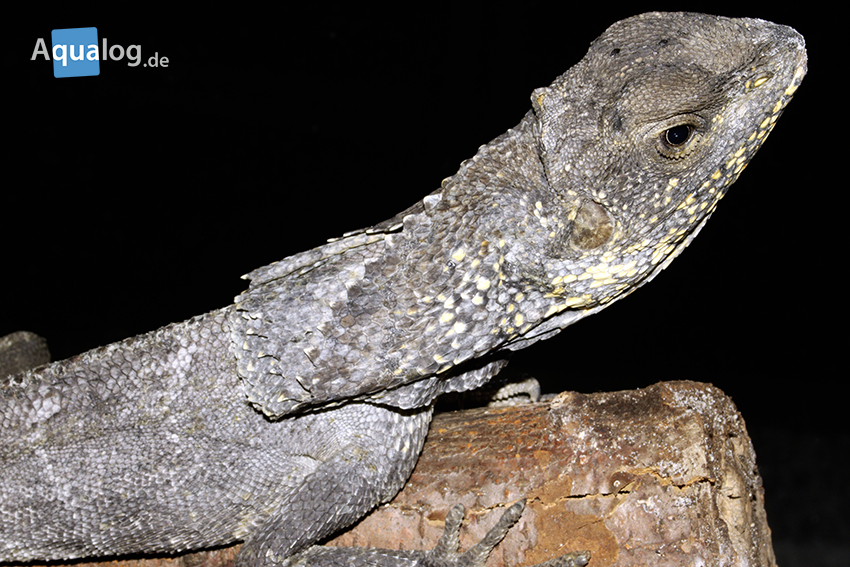 The Australian frilled, frill-necked, bicycle lizard or dragon (Chlamydosaurus kingii) – also known as the ‘frilly’ in its homeland – is not a small lizard; it can grow to up to 95cm in total length. However, it is a slim animal whose tail can be as long as 65cm. It is also quite a docile lizard. Its body coloration is usually brownish or greyish. All in all, it looks as if it could make a desirable and easy meal for a hungry predator.
But…this remarkable creature has a spectacular surprise in store for any would-be aggressor. When attacked or alarmed, it faces the source of the ‘trouble’, extends its frill into an umbrella-like structure measuring some 25cm across (in a fully adult specimen), opens its mouth wide – showing off a brightly coloured gape, extends its legs, hisses loudly and jumps towards its attacker. It can also beat its tail against the ground. It now looks nothing like a docile, slim lizard, but an aggressive large one capable of inflicting serious damage on its attacker. Not surprisingly, this behaviour can pay rich dividends for the frill-necked lizard which, as a result, usually escapes with its life. However, should its elaborate ploy fail, it still has other cards which it can play. It can, for example, turn tail and run, literally leaving its tail in its wake. The vigorously thrashing tail distracts the attacker, thus giving the lizard a chance to make a gateway, something that it can do at great
speed by raising its body from the ground and sprinting upright on its back legs (hence one of its common names, the bicycle lizard). And finally, if forced to do so, it will bite, causing – at the very least – considerable pain. 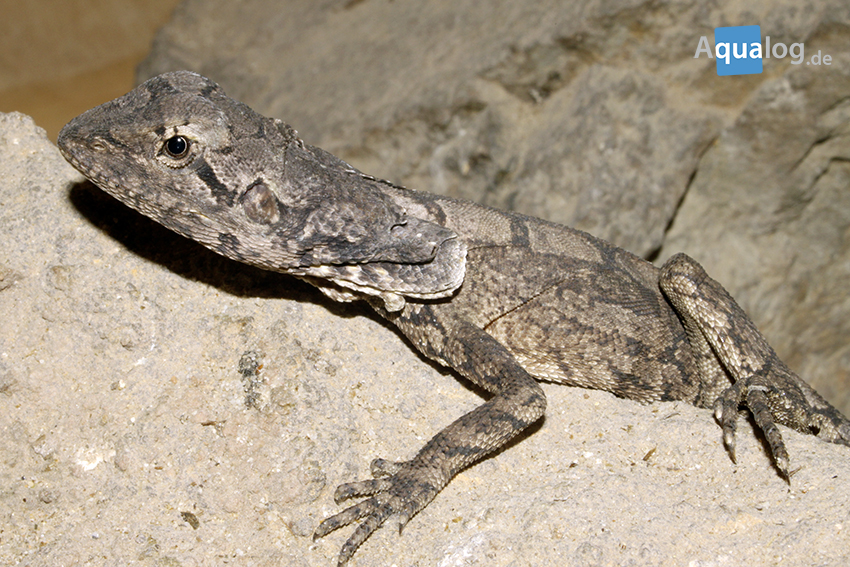 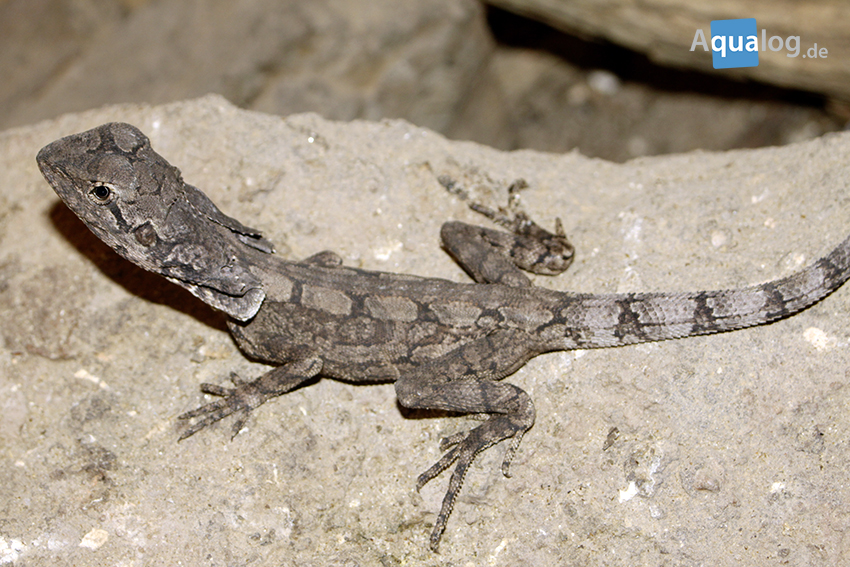 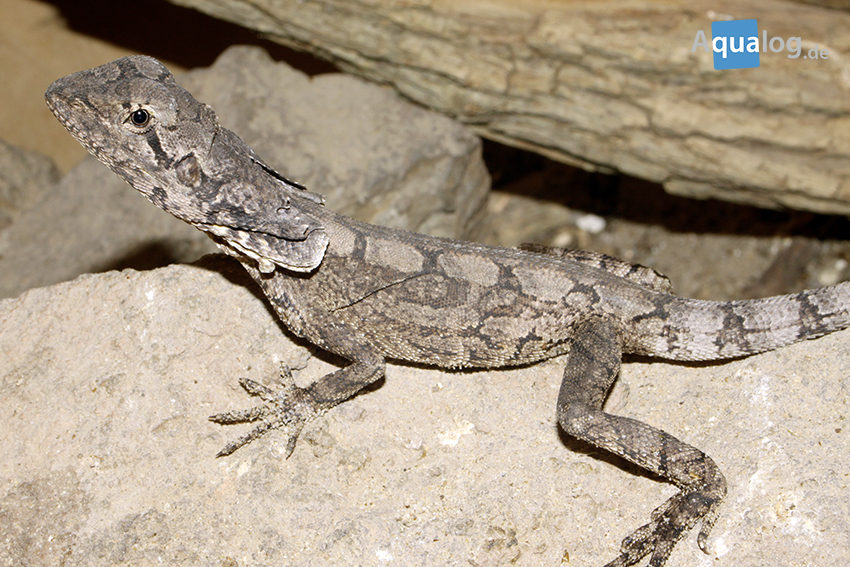 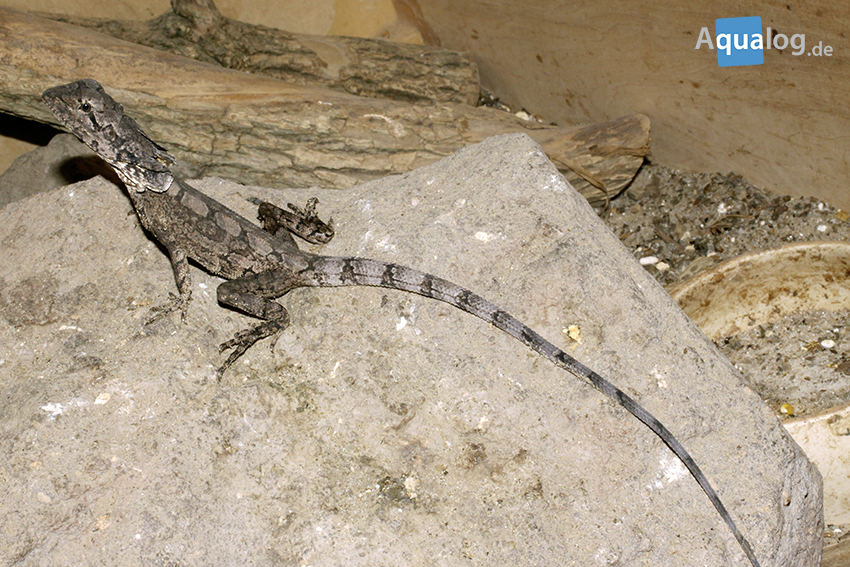 It is undoubtedly the frill-necked lizard’s extraordinary behaviour and appearance when under threat that have been largely responsible for its widespread interest among herpetologists. It certainly isn’t its colour, which is quite drab overall. Neither is it its breeding behaviour, since this is relatively rarely seen in average home vivaria. One of the main reasons for this is that these lizards are loners, with males and females generally coming together only to mate. Therefore, while juveniles may be kept together, adults are best kept apart, although a really roomy enclosure might be capable of housing, say, a male and a female. If two males are kept together, the dominant one could end up causing its submissive partner both stress and physical injury.
Housing for a single adult should be around 1 metre long x 50cm wide (deep) x 1 metre high. Several trunks and branches should be provided so that the specimen can shelter, as well as climb and bask, as it does in the wild. The provision of several such sites, well separated from each other, may help in accommodating more than one frill-necked lizard in the same vivarium. A variety of substrates may be used. Among those most frequently
recommended is newspaper. However, while this is easy to remove and replace, it is not either attractive or natural-looking and, thus, does not appeal to many keepers. Sand is therefore the preferred choice of many
experienced herpetologists, though bark, soil or even artificial lawn/turf are also used. The temperature of the enclosure must be kept high, with a range of 35-38ºC being suitable around the basking areas(s) and around 25-28ºC in other, cooler, areas of the vivarium. 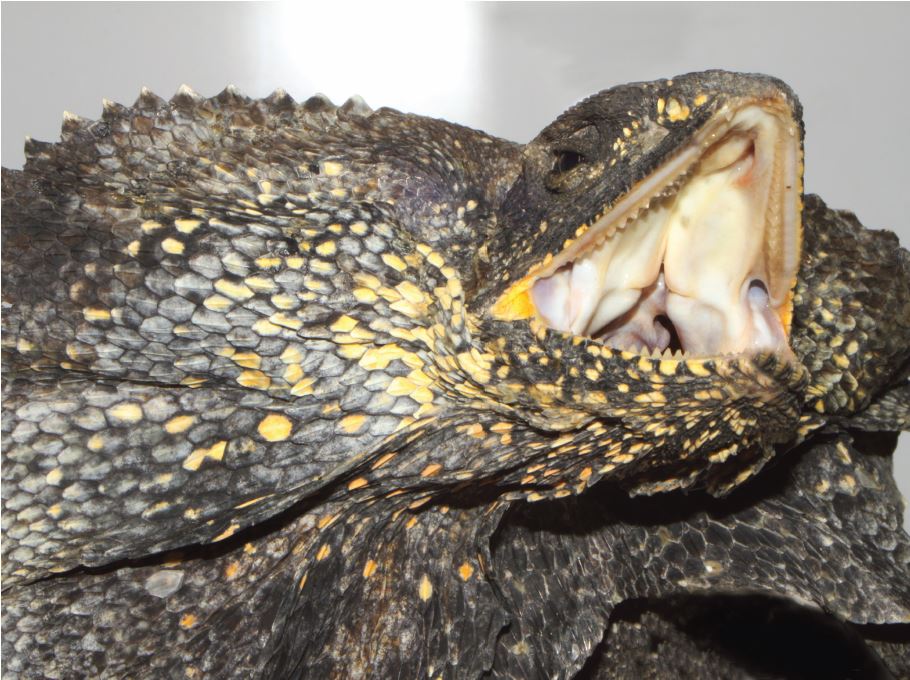