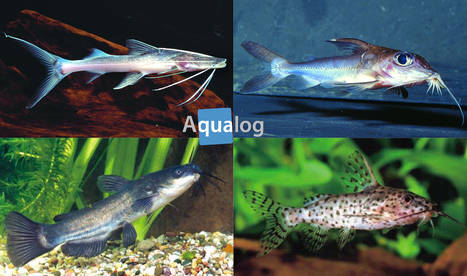 Catfishes is the name given to a large number of different fish families in the order Siluriformes. Features all catfishes have in common are the usually well developed barbels around the mouth and the absence of scales (the body is either naked or covered with bony plates); an adipose fin is frequently present. The smallest catfish species grow to around 2 cm long, the largest to around 3 metres. It is thus necessary to have a good knowledge of the species in order to be able to decide whether a catfish species is suitable for the home aquarium, as it is impossible to predict how large the juveniles found in the trade will grow. All catfishes are fundamentally interesting aquarium fishes, but the very large species are suitable for a “normal” home aquarium only as juveniles. The anticipated eventual size of each species can be found on the label on the sales aquarium. It should also be borne in mind that on the one hand fishes keep growing throughout their lives, and on the other that they attain record sizes only in extremely rare cases. Hence in the case of large species the size given is that usually seen in normal adults in the wild, with the maximum recorded length given in brackets.

There are some 3,400 catfish species in 38 families. This profile doesn’t include the suckermouth catfishes (Loricariidae, “L-number catfishes”) and the mailed catfishes (Callichthyidae), as each group has its own Profile. But even so that leaves around 2,100 species, about 150-200 of which turn up now and then in the trade. These are more often than not species that are extensively reared for food in aquaculture, whose attractive juveniles are sometimes supplied to the ornamental fish trade as a secondary source of income.

Bottom-dwelling catfish species are usually active at dusk or during the night. In the course of time they get used to food being provided during the day in the aquarium, but nevertheless require places to hide during the daytime. These can consist of natural materials, but pieces of PVC pipe are also suitable. This group includes the naked catfishes of the families Bagridae, Pimelodidae, Claroteidae, and Pseudopimelodidae; the talking and driftwood catfishes (Doradidae and Auchenipteridae); the Channel Catfish and its allies (Ictaluridae); the electric catfishes (Malapteruridae); the large species of the true catfishes (Siluridae), the walking catfishes (Clariidae), and the upside-down catfishes or squeakers (Mochokidae). For all the families listed you must reckon on eventual sizes in excess of 15 cm, usually 20-50 cm, although there are talking catfishes (Doradidae) and driftwood catfishes (Auchenipteridae) that grow no larger than 5-6 cm throughout their lives and hence are ideal for aquarium maintenance. There are also small species in the other families listed, but of these only the Upside-Down Catfish (Synodontis nigiventris, family Mochokidae) is regular in the trade. Note that some species can grow to significantly more than a metre and are suitable only for really large aquaria and zoos in the long term!

Another group of crepuscular and nocturnal species bury themselves in the sand during the day, These include the banjo catfishes (Bunocephalidae) and the moth catfishes (Erethistidae). Almost all species of these two families remain small and rather inactive, making them well suited to small aquaria. Obviously they require a substrate that consists at least in part of sand (river sand, not builder’s sand!). Similar maintenance is required by the frogmouth catfishes (Chacidae), which grow to some 20 cm long.

The next group usually swim in the open water and are active by day, They include the freshwater shark catfishes (family Pangasiidae), which all grow very large (significantly more than 50 cm; Pangasius fillets are sold in the food trade); the glass catfishes (genus Kryptopterus, family Siluridae), with the commonest species in the trade, Kryptopterus vitreolus (synonym: K. bicirrhis) attaining 6-8 cm in length; the dwarf shark catfishes (e.g. the genus Pseudeutropius, family Horabagridae), which grow to around 10 cm long; and the African glass catfishes (genera Parailia and Pareutropius, family Schilbeidae), which grow to 8-12 cm long. These fishes require open swimming space and the cover of floating plants while they are settling in.

The marine shark catfishes (genera include Arius and Sciades, family Ariidae) are also diurnally active; they grow to 30-40 cm long and adults live in the sea. Juveniles can be maintained in a brackish-water aquarium (5-15‰ salt) with a large expanse of sandy bottom, while from a length of around 15-20 cm they require a marine aquarium.

The majority of catfishes are carnivorous and not very fussy about what they eat. They can readily be fed on all the usual types of ornamental fish foods, i.e. dry, frozen, and live foods. Many of the larger catfish species have huge mouths and are able to swallow large morsels, and hence are a danger to smaller tankmates. There are hardly any feeding specialists among the catfishes, apart from the vampire catfishes (subfamily Vandelliinae of the family Trichomycteridae), which are never seen in the trade; they are specialised in drinking blood from the gill blood vessels of larger catfishes. However, some species do require live food (sometimes including small feeder fishes) during acclimatisation. Only the shark catfishes (Pangasiidae) feed primarily on vegetable material, but in the aquarium they are undemanding omnivores like the rest.

As with all fishes, the most important element of maintenance is regular partial water changes. The species that live in soft acid water in the wild are sensitive to a high germ count in the water and to high levels of nitrogenous compounds.. Hence extensive partial water changes are required. Ideally 1/3 – 2/3 of the water should be changed every week, refilling with conditioned, fresh water of the same chemistry; at the same time the difference in temperature between the new water and the aquarium water should be as small as possible and never more than 2-3 °C. In aquaria with a low fish density, minimal germ population, and good biological filtration, water changes can be reduced to 1/5 of the total volume every 14 days. Longer intervals should not be employed in the long term.

In line with the natural habitat, these catfishes should always have access to secondary plant material. Dead leaves (of Sea Almond, Beech, Oak, or Walnut), Alder cones, or peat can be utilised, or special liquid preparations added at every water change.

The catfishes that inhabit moderately hard to hard and neutral to slightly alkaline water in the wild can be maintained using the normal water-changing regime for all aquarium fishes, namely around 1/5 of the total volume every 14 days. A very large water change of around 80% of the tank volume with cooler water (around 10 °C colder than the aquarium water) is a trigger for spawning in numerous species, without which they won’t lay eggs. If there is no intention to breed then this sort of radical water change is best avoided out of respect for other tank occupants, who may not tolerate this treatment well if at all.

The majority of catfishes will thrive in normal mains water and as a rule it is unnecessary to prepare special water for them, though the rule about checking individual requirements still applies.

Almost all catfishes get along very well together and with other fishes, as long as they are unable to eat one another. The electric catfishes (family Malapteruridae) and the members of the family Olyridae are exceptions, and are exceptionally intolerant of one another.

The space requirements of catfishes, even the larger bottom-dwellers, are moderate. The aquarium should, however, be at least 5 times as long and 3 times as wide as the fish is long; the aquarium depth is not so important in the case of bottom-dwelling catfishes. The aquarium for open-water species should be larger: around 10 times the length of the fish with a proportionate width and depth seems to suit, not least because these free-swimming species like to live in shoals. The same principle should also be applied to the upside-down catfishes (Mochokidae), as these species too are social and should be maintained in a group, and they also utilise the depth of the aquarium as well. Some catfish species with extremely long barbels require an aquarium sufficiently large that they don’t constantly touch the glass with their barbels, as otherwise they may become very nervous.

The decor of the catfish aquarium should always be well designed, providing plenty of hiding-places on the one hand, but also leaving adequate open swimming space on the other.

Catfishes are generally long-lived, with even small species living for several years, and large species for as long as several decades. There are even rumours of large catfishes living for more than 100 years.

Catfishes grow very rapidly. Small species are usually sexually mature at 6-8 months, larger ones in their second year of life. Even the giants among the catfishes require little more than three years to attain sexual maturity.

Catfishes are a matter of individual tastes. They hardly ever have bright, eye-catching colours, and their charm lies instead in their bizarre forms and interesting behaviour.
Care is required when handling catfishes, as all species have hard, pointed spines in their fins, and these can cause wounds that are at best painful, and sometimes also dangerous. If you are “stabbed” then keep a close eye on the wound. People with allergies are always at risk, as some catfishes also deliver secretions from poison glands via their spines. Medical attention should be sought in the event of very severe swelling and pain.
Catfishes are best caught using very fine-meshed nets that won’t trap the fin spines. If this does ever happen then the net must be cut away, as it is virtually impossible to free the catfish otherwise. 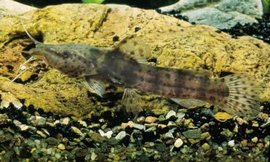 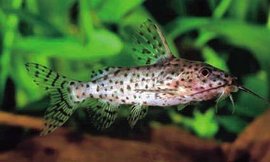 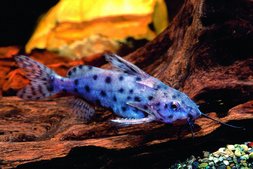 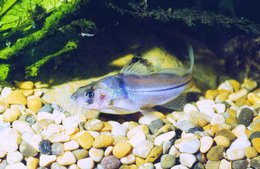 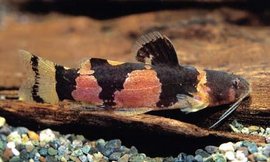 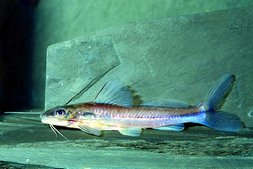 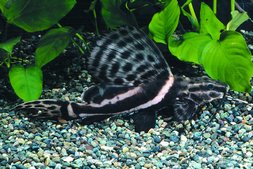 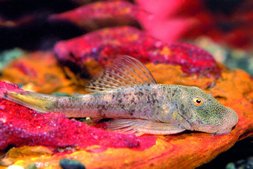 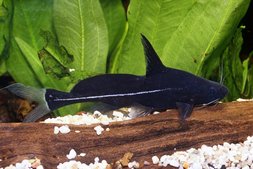 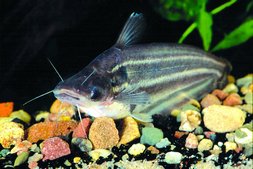 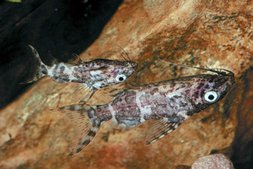 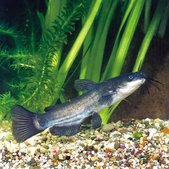 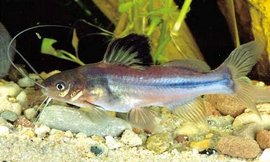 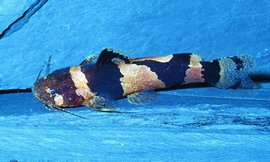 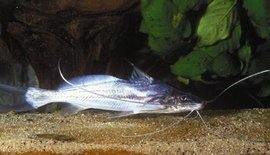