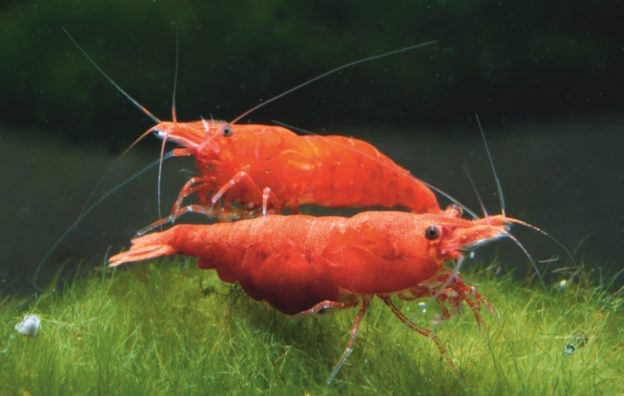 Dwarf shrimps of the genera Caridina and Neocaridina are the all the rage in the 21st century aquarium hobby. When Uwe Werner published the very first book on the subject in 1998, Shrimps, crayfishes, and crabs in the freshwater aquarium (Aqualog), a few species were already known in the hobby. But it was virtually impossible to get reliable information on the little creatures imported more or less universally as bee or bumblebee shrimps.

That has undergone a fundamental change during the last almost 20 years. In the meantime the massive hype surrounding these shrimps has abated somewhat and in particular prices have dropped to a reasonable level; this has meant that maintaining shrimps has once again become a hobby for a broad market and not just something for aquarium fanatics – a development that can only be welcomed. Moreover it is nothing new for animals or plants to command sometimes ridiculous prices among enthusiasts. We have only to recall the tulip mania in the Netherlands in 1620-1637, whose eventual collapse even triggered a sort of world economic crisis. In those days the price paid for some tulip bulbs was as much as the cost of the most expensive houses in Amsterdam…

What makes breeding dwarf shrimps so interesting is the huge mutability of these little creatures in captivity combined with a very rapid succession of generations. The maximum age of a dwarf shrimp is around 1.5 years and the females of Neocaridina heteropoda produce clutches almost continuously at temperatures above 18°C. Each clutch contains around 20-50 eggs which are carried around (and hence protected) by the mother shrimp on the legs (pleopods) of her abdomen until the young hatch. Even in the wild many dwarf shrimps are extremely variable in coloration. I remember one case where a breeder in Karlsruhe saw dwarf shrimps he had never seen before at a breeder friend’s. He asked the friend for a few specimens and was told that the shrimps were some he had bred himself and passed to the friend a few months previously. That is how mutable these shrimps are!

Neocaridina heteropoda was originally known from eastern China, but has now also been introduced in various other parts of the world. Its ease of breeding combined with a wide tolerance of the most diverse water conditions made it seem particularly suitable for use as a food animal in aquaculture. Hardly surprisingly, the little shrimp sooner or later escaped and created free-living colonies. Nowadays it is found in large parts of China, Japan, and Taiwan, and further away in Hawaii. The shrimps widespread in the hobby supposedly originated from Taiwan. Because Neocaridina heteropoda can also survive outdoors year-round in Germany, great care should be taken not to let them escape into the wild. Anyone who, intentionally or unintentionally, releases livestock – be it dogs, cats, birds, or aquarium-dwellers – is committing a criminal offence, a point worth bearing in mind. 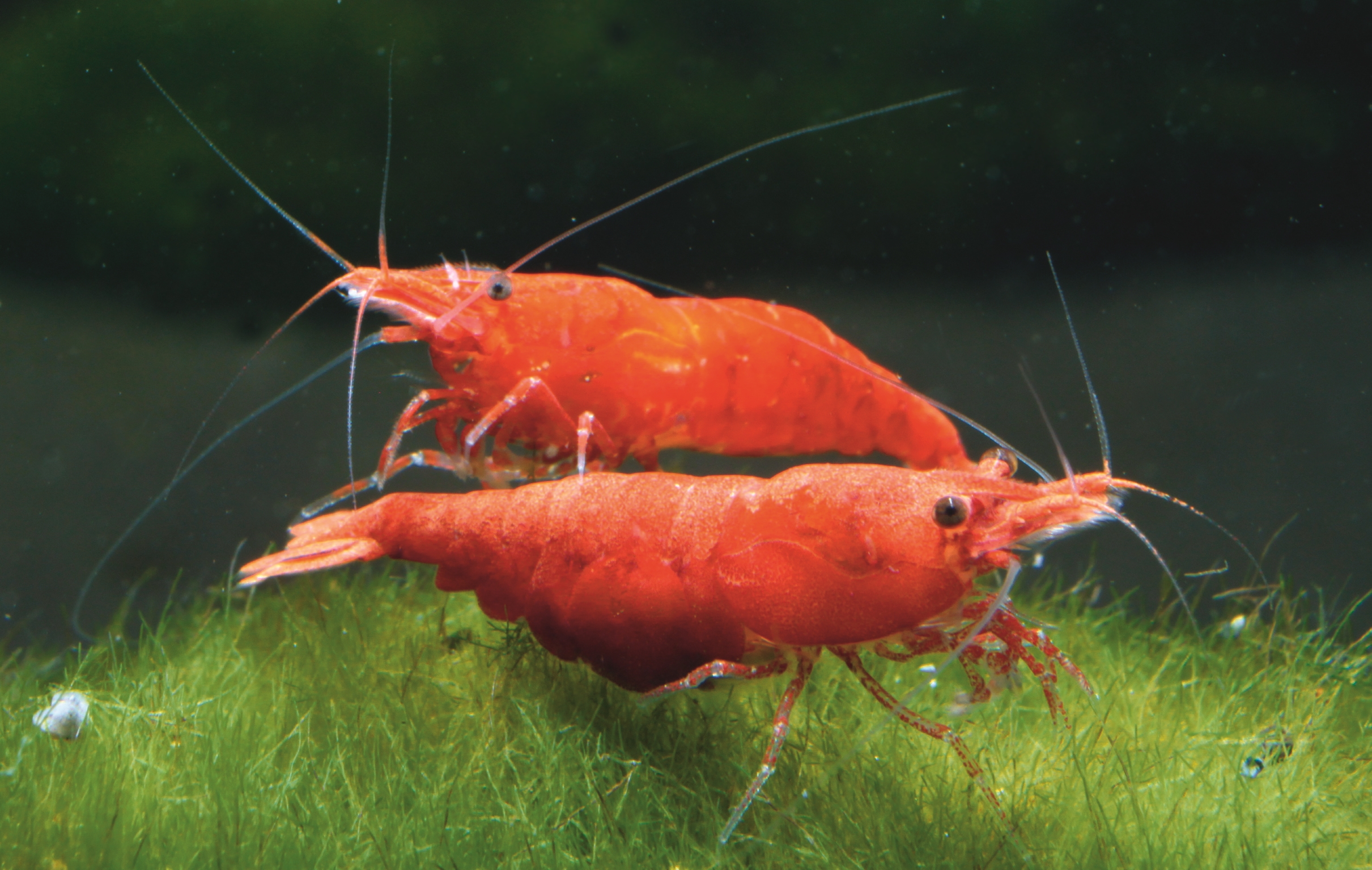 It all started with the Cherry Red

Neocaridina heteropoda is so variable in coloration in the wild that it cannot be identified on the basis of color. The spectrum ranges from black to transparent, with shades of green brown, and red in between. Bluish individuals also occur. But if there is such a thing as a golden rule when it comes to breeding ornamental animals – be they canaries, Goldfishes, or indeed dwarf shrimps – then it is that if it is possible to breed a red form, then a red form will be bred. And thus the cultivated form Cherry Red soon came into being, and rapidly made Neocaridina heteropoda the most popular dwarf shrimp of all. The coloration became even more intense in the “Fire Red”. But gradually these little shrimps also started receiving derogatory nicknames such as “Guppy shrimps”, denoting that it is as hard to prevent them from breeding as it is with Guppies. Now that is nonsense in the case of the Guppy. Such statements can be made only by people who have never been involved in the breeding of Guppies. But there will always be counter-currents. So the Japanese-sounding name “Sakura” was coined for red Neocaridina heteropoda in which the legs are also an attractive red, the idea being to imitate the terminology used for Koi or the classification of Crystal Red shrimps. That sort of thing is remarkably effective. 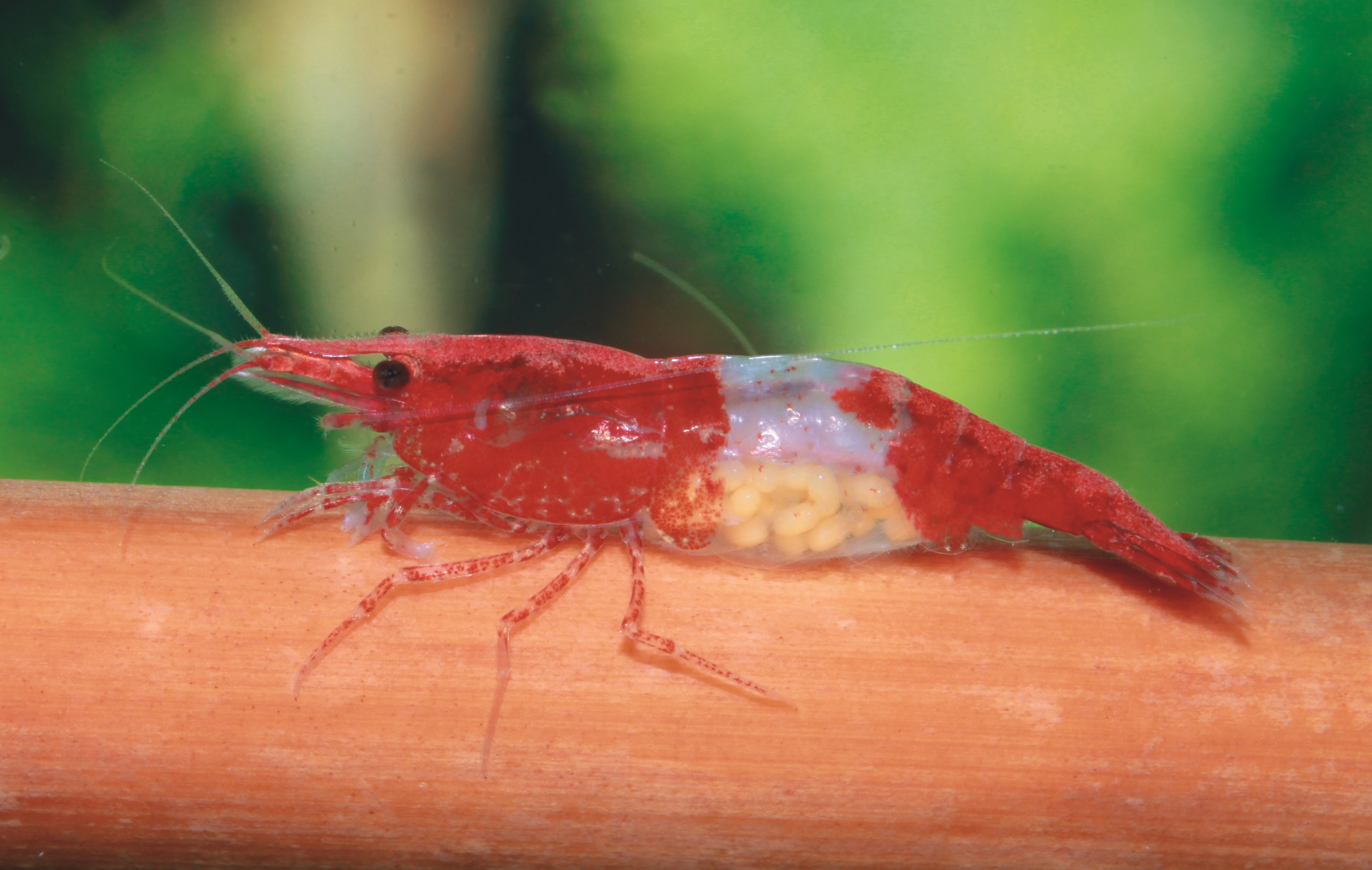 This attractive variant of Neocaridina heteropoda is called the “Rili”. The photo shows an egg-carrying female.

No end in sight

But in the meantime not only red but also bright yellow Neocaridina heteropoda are being bred. One very attractive variant is the red and white checkered “Rili” form. This is thought to have been bred in Taiwan and is sometimes also known as the Kohaku Shrimp. Again reminiscent of Koi… The Rili Shrimp breeds true and can be kept and bred in exactly the same way as the familiar Cherry Red.

To sum up in brief: if possible these shrimps should be kept in groups of 10 or more specimens, with an underwater landscape offering as much cover as possible, ie plants, dead wood, dead leaves, large pebbles, etc.; the substrate should consist of medium-coarse gravel (grain size 3-6 mm) to provide cover for the numerous offspring, which are initially bottom-oriented; water parameters (hardness and pH) are of secondary importance as long as extremes are avoided; the water temperature can be between 4 and 28 °C, though abrupt temperature fluctuations should be avoided; feeding should be with a staple diet of ornamental-fish food (ideally tablet foods). Males and females of Neocaridina heteropoda differ noticeably in body form; in this regard I suggest looking at the photos accompanying this article. Note that Neocaridina heteropoda doesn’t have an established popular name. “Dorsal-Stripe Dwarf Shrimp” is sometimes suggested, but the name isn’t very diagnostic as on the one hand there are also other species with dorsal stripes, and on the other some color variants of N. heteropoda don’t exhibit any dorsal stripe at all.

Do you know “All about Shrimps, Crayfishes and Crabs“? 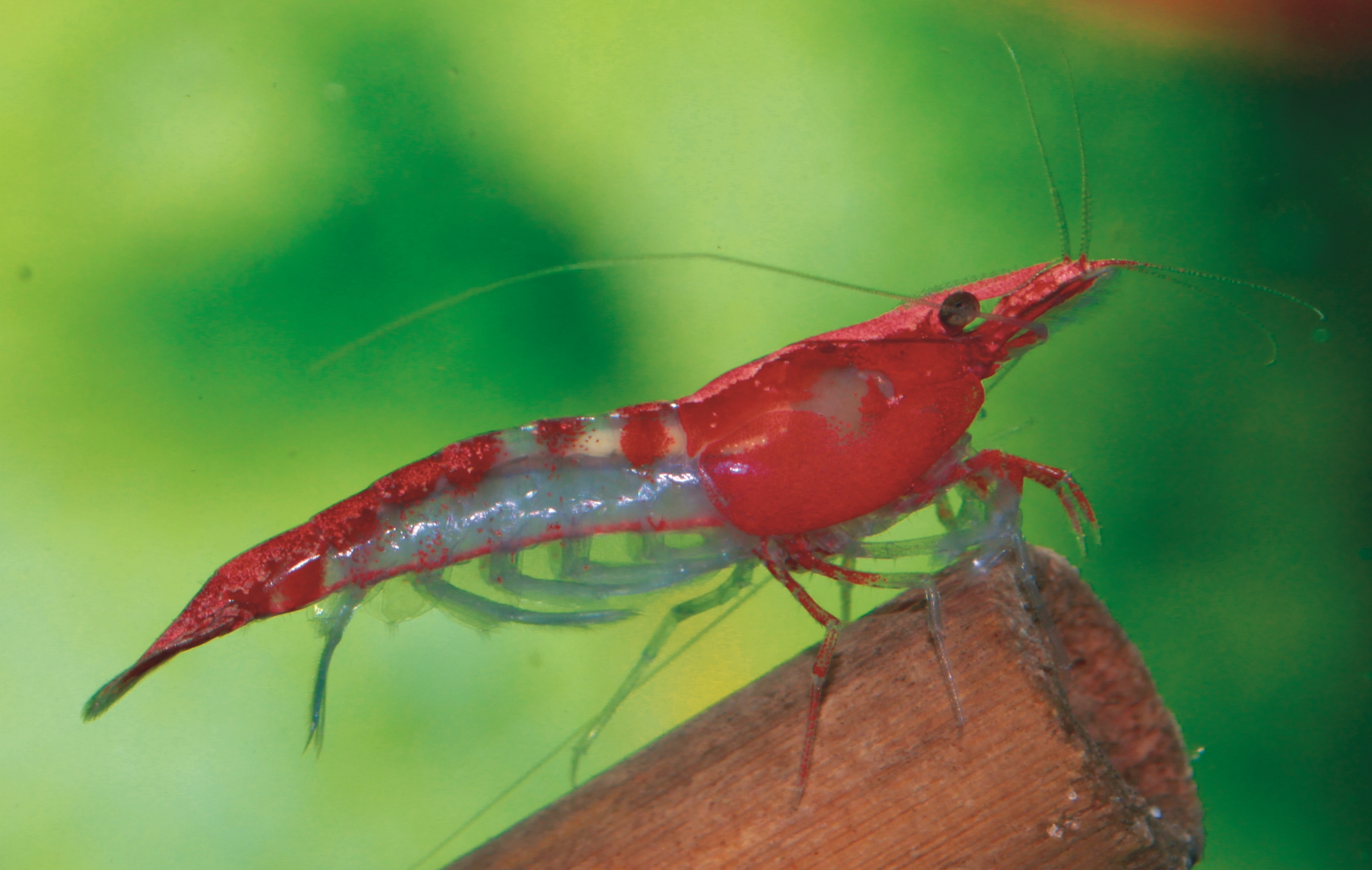 Male of the Rili variant. Males can be recognized by the slimmer abdomen.