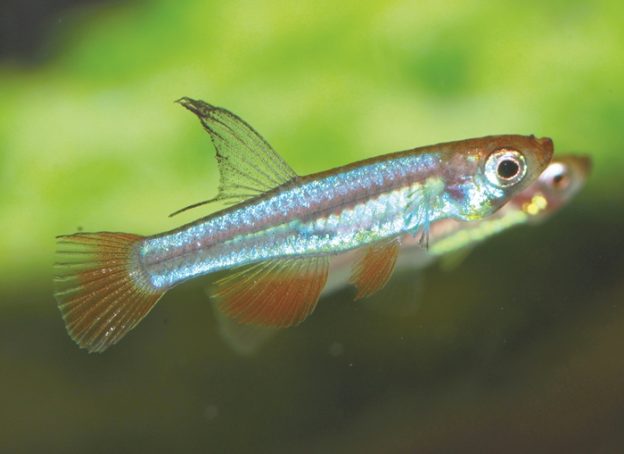 The lamp-eyes are killifishes from Africa and a number of species have long been part of the standard range of better aquarium stores. But the species that Aquarium Glaser has recently imported from the D. R.Congo is not only fabulously beautiful but also an aquarium-hobby rarity of the first rank.

A confused mass of names

The scientific genus name of this lampeye remains the subject of debate. Initially this little fish was placed in the genus Aplocheilichthys, and then the new genus Congopanchax was erected for it. Thereafter Congopanchax was regarded as a distinct genus by some scientists, while others saw it as no more than a subgenus of Aplocheilichthys. Nowadays, however, Congopanchax is usually regarded as a subgenus of the genus Poropanchax. This may all sound very confusing, but merely reflects the fact that the phylogenetic relationships of the lampeyes are being studied more intensively. Moreover, different research methods produce different results and these are in turn subject to different interpretations by the researchers. There is no right or wrong here, as the discussion is by no means at an end, and everyone involved in the argument has the scientific freedom to decide for him- or herself, on a purely personal basis, which of the evidence put forward should be regarded as conclusive. And thus it is that this little fish can be found in the literature under the names Congopanchax brichardi, Aplocheilichthys brichardi, Poropanchax brichardi or – and this is the most commonly used designation at present – Poropanchax (Congopanchax) brichardi.

The fact that the name Congopanchax is placed in brackets signifies that it is being used as a subgenus name. We aquarists need to be aware of all these names in order to be able to study the entire body of literature that currently exists on these little jewels. 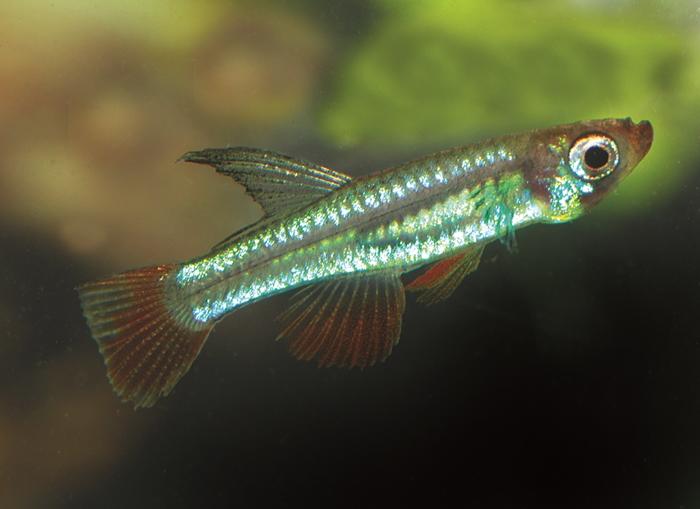 The precise distribution region for Congopanchax brichardi, for which I suggest the popular name “Brichard’s Hummingbird Lampeye” (C.myersi is sometimes known as the Hummingbird Lampeye), is at present unknown. This tiny fish isn’t caught with normal fishing equipment. It is known that the species occurs in the central Congo drainage including the shallow parts of Lake Tumba. The lake is over-fished, and so heavily that it is sometimes no longer possible to earn a living by fishing, and some former fishermen have had to go over to agriculture. According to the literature the known habitats of C. brichardi are small tributaries, streams, swamps, and bank regions with an abundant growth of aquatic plants. The water there is very soft conductivity 20-50?S, ie barely 1°dGH),and acid, with the pH lying between 4.5 and 5.5. Lampeyes are generally shoaling fishes,and the shoals like to remain close to the surface.

U. Schliewen (verb. comm.) has caught the species in the shallow water of Lake Mai Ndombe. The water there is extreme blackwater and the water temperature very high, around 30 °C. In his view the species doesn’t occur in small cool streams, as is the case with the Butterfly Barb (Barbus hulstaerti), but more in backwaters and floating meadows of the major blackwater rivers and even in blackwater lakes. Because of the overfishing situation in Lake Tumba and its only imprecisely known distribution, Brichard’s Hummingbird Lampeye appears as “Least Concern” on the International Red List of the IUCN.That is the lowest alert level for a species. 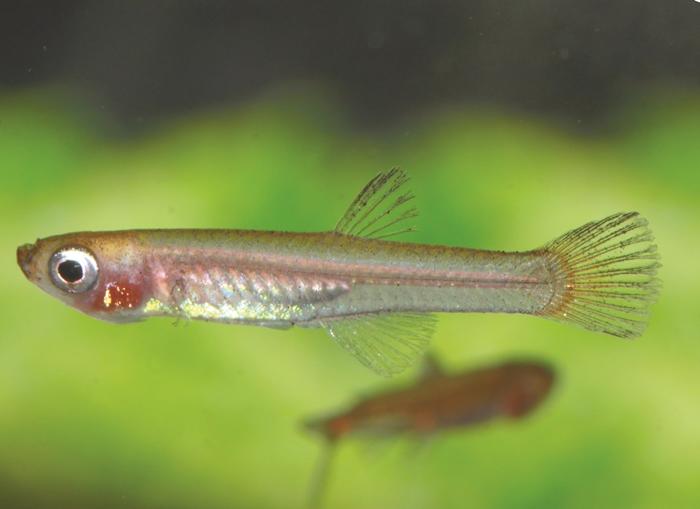 Undoubtedly the main problem for aquarists as regards Congopanchax brichardi is obtaining the species at all.Only relatively few importations reach us from the central Congo region and Brichard’s Hummingbird Lampeye is as good as never among them. This is undoubtedly because it is generally very difficult to accommodate such small, delicate fishes correctly over there.And in addition debilitated fishes are very sensitive to transportation. Nevertheless from the 1990s on there have been occasional importations of these breathtakingly beautiful fishes to Europe.

Great care is required during acclimatization, as otherwise losses are unavoidable. These fishes are very susceptible to bacterial (debilitating) diseases and the dreaded “Velvet Disease”, Piscinoodinium. The specimens in the photographs were imported by Aquarium Glaser in the second week of January 2012. The fishes were initially maintained for a week in a 15-liter photographic aquarium with relatively soft water (8 °dGH) at pH 7 and a temperature of 22-24 °C, where they settled in well. The photographic aquarium was fairly strongly filtered to keep the water free of suspended particles. A submersible pump with a turnover of 40 liters/hour powered the filter. The little fishes tolerated this strong current without problem, but were very nervous in the clear water. They are best not exposed to strong current in the long term.

When the photographic work was finished the fishes were moved to a small 30 x 20 x 20 cm) aquarium filled with the readily available rain water, matured in a small garden pond. A number of Alder (Alnus glutinosa) cones colored the water in this aquarium deep brown. The aquarium wasn’t filtered, and the water temperature was around 28 °C. The fishes were fed exclusive with live Artemia nauplii. Stomach-contents investigations performed by Matthes in the field showed that Congopanchax feed on Cladocera, copepods, and the tiniest of insect larvae.

The deep brown water has the advantage that the fishes feel more secure; the humic substances from the Alder cones have a slight bactericidal and fungicidal effect, and the development of the light-hungry Piscinoodinium is at least limited.

Dieter Bork succeeded in breeding these fishes in the 1990s. He placed them in a group (16 individuals) in a 30-liter aquarium at 27 °C, with soft water (conductivity 200?S/cm) and a pH of 6.8, with a piece of bogwood covered in Java Moss as a spawning substrate.The little fishes proved very productive (more than 100 fry after 14 days), but the young grew very slowly and took 7-12 months to reach adulthood. 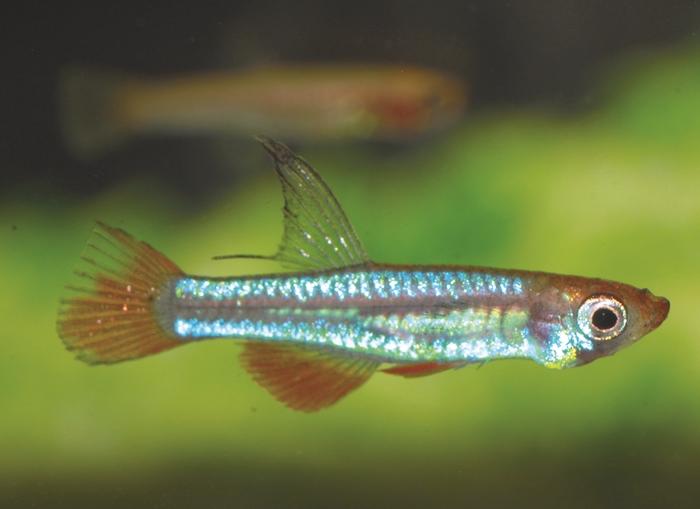