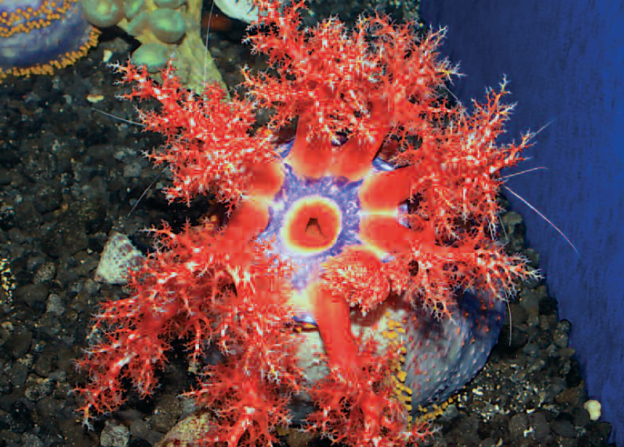 Hand on heart: did you answer the opening question with “sea cucumbers”? And yet it is true! Sea Cucumbers are a model of evolutionary success! They represent some 90% of the biomass of the ocean depths, and around 70% of the surface area of the Earth lies beneath the oceans, so the calculation is correct.

Sea cucumbers make up the class Holothuroidea in zoological systematics. Around 600 species are known from all over the world. They live exclusively in the sea and all species feed on small organisms. Fundamentally they use two methods of doing this. The first group consumes vast quantities of sand and mud, sorts the digestible from the indigestible inside the body, and then excretes the indigestible as purified sand. The second group catches plankton from the water using modified mouth tentacles. 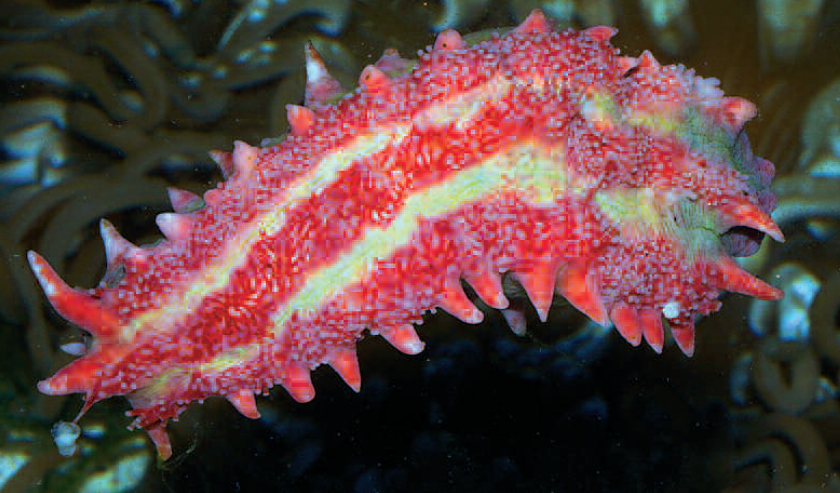 Extra-terrestrials?
All non-sessile*, multicellular animals on Earth are bilaterally symmetric – except for the echinoderms! Bilaterally symmetric means that there is a matching right and left half to the body. By contrast echinoderms – which include the crinoids, brittle stars, starfishes, sea urchins, and, of course, the sea cucumbers – are radially symmetric, and have five body axes or a multiple of that number. Life on Earth probably arose on just one occasion, and for this reason all life forms – be they bacteria, fungi, plants, or animals – are related to one another in some way. This can be seen most clearly in biochemistry, where the obtaining of energy and metabolism are based on the same principles in all life forms. But there are also fundamental agreements in anatomy. So how did the radial symmetry of the echinoderms come about? Are they ultimately extra-terrestrial life forms that originally came here from another galaxy? No, probably not. As the larvae of echinoderms are perfectly normal bilaterally symmetric. The fundamental development of the animal egg cell after fertilization has even been studied using the eggs of sea urchins, as sea urchin eggs are so large, damage-resistant, and above all transparent. The initial development of a human embryo doesn’t differ from that of the embryo of a sea cucumber. Sea cucumbers are natives of Planet Earth, just like us.

*Many sponges and a number of other sessile animals are amorphous, i.e. without a regular form. 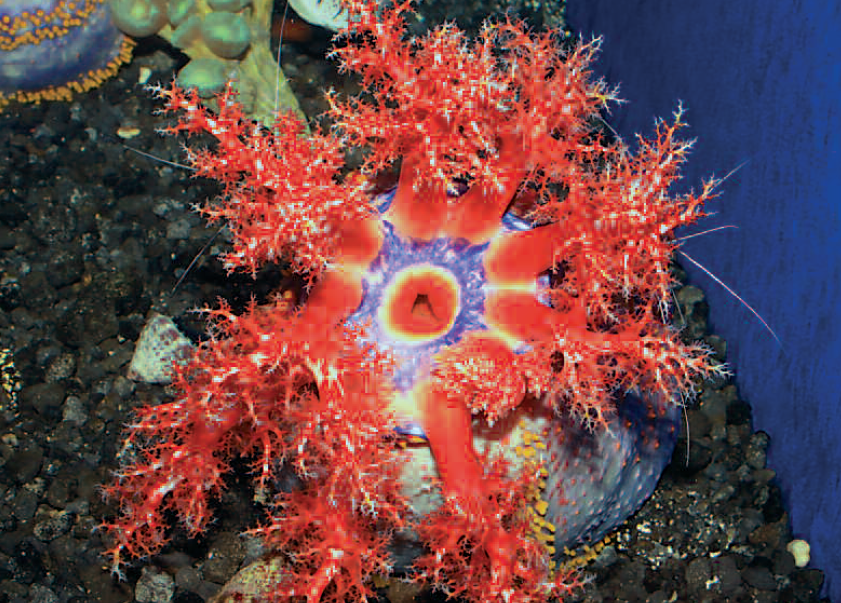 The mouth tentacles of Pseudocolochirus look like soft corals.

Breathing via the backside
The better-known sea stars and sea urchins have only one important body opening, sited in the center of the underside of the body. This opening is used to eat food, excrete feces, and release sex cells. Sea stars and sea urchins don’t have any respiratory organ in the normal sense. They take in water via a sieve-like plate (the so-called madreporite plate) and pump it through the body using a sort of hydraulic system. This not only serves to supply oxygen, but also provides mobility. The numerous little feet found on the bodies of starfishes, sea urchins, and sea cucumbers, the so-called ambulacral feet, are operated via a hydraulic system! A sea cucumber is fundamentally a very elongated starfish lying on its side. The change in body form resulted in the madreporite plate ending up on the inside of the body. So how does water get inside? Apparently it was impractical for sea cucumbers to do everything via a single body opening. It is probably more beneficial to process the ingested sediment along the length of the body as if on a conveyor belt and excrete it at the rear: the anus was invented by echinoderms! In addition the existence of an anus improves the efficiency of food intake. If the indigestible sediment residues were to leave the sea cucumber via the mouth opening, then a comparatively large amount of this redundant material would be picked up again. Sea cucumbers also breath via their anal opening! They have developed sac-like internal organs, so-called respiratory or cloacal trees, whose extremities are finely branched. These organs are pumped full of water via the anus, and extract oxygen from it. Sea cucumbers also require water for their hydraulic system. 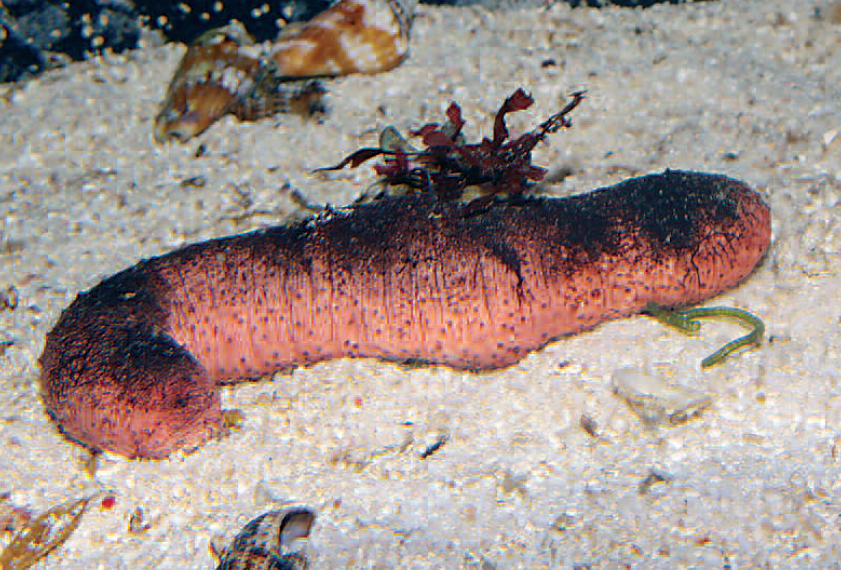 Beware, highly poisonous!
Sea cucumbers have no sensory organs worth mentioning and only a very simple nervous system. Flight from predators is not an option. Because sea cucumbers are so numerous and widespread everywhere, one might think that many fishes and crustaceans would have specialized on this easy prey. Not so! All sea cucumbers possess an extremely potent poison, known as holothurin. This is concentrated in the socalled Cuvierian tubules, threadlike appendages in the end of the gut. In the event of a serious attack the sea cucumber expels these Cuvierian tubules through its anus towards the aggressor. The Cuvierian tubules are not only highly toxic for fishes, but also very sticky. Despite this sea cucumbers are eaten in the Tropics! If you continue to irritate a sea cucumber after it has expelled its Cuvierian tubules then it will expel its entire innards, which smell atrocious to us but are eaten by people in the South Seas, either raw or as the basis of a soup. The entire emptied and skinned sea cucumber is smoked or boiled and is used, under the name trepang, for medicinal and culinary purposes, especially in China and the Philippines. Incorrect preparation can lead to poisoning, though holothurin isn’t very dangerous for humans. Skin contact can lead to burning pain, and contact with the eyes can even cause blindness. If you swallow holothurin then the result is muscle cramps, stomach pains, and in severe cases death through respiratory paralysis. 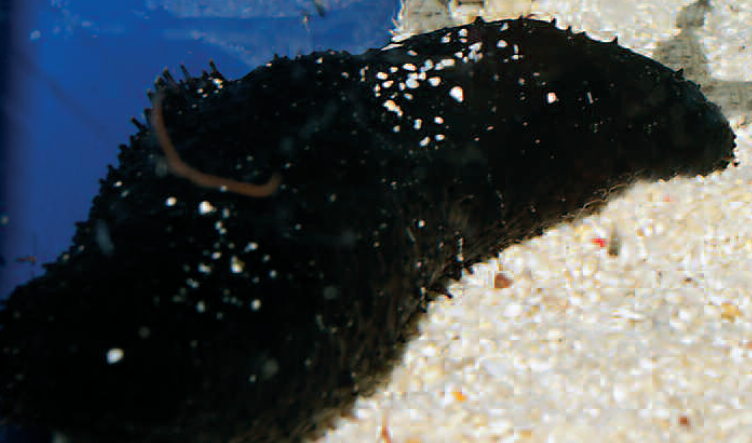 Holothuria atra – this species can grow to more than 30 cm long. 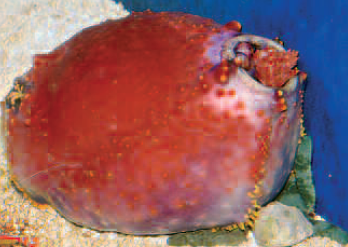 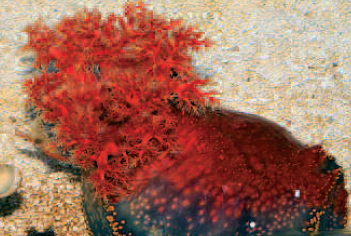 In the aquarium
Their toxicity for fishes makes sea cucumbers potentially dangerous to keep. The mere presence of some species can lead to the demise of the entire fish population, though usually a sea cucumber needs to be seriously irritated or hurt in order to represent a danger in the aquarium. The greatest danger lies in pump intakes. Anyone who wants to keep sea cucumbers – and there is no denying some species are extremely attractive – must be sure to take appropriate measures to prevent them from being sucked in. It is also inadvisable to keep them with large crabs or other crustaceans, as these ever-hungry creatures may attack a sea cucumber and thus endanger the entire population of the aquarium. Sea cucumbers themselves have an immense capability for regeneration. Their entire internal organs can be replaced within a few weeks. The attractive sea cucumbers of the genera Colochirus and Pseudocolochirus are plankton feeders, and can readily be fed on Artemia nauplii, frozen plankton, Cyclops, etc in the aquarium. The less attractive species of the genus Holothuria are also increasingly being maintained, and can be outstanding biological helpers in aquaria with large areas of sand. They don’t usually need any extra feeding. Sea cucumbers are sexually dimorphic. If they are hermaphroditic then they are male for some of the time and female for some of the time. There are as yet no reports of breeding in the aquarium. The risks of poisoning should always be taken into consideration before purchasing sea cucumbers. Holothurin doesn’t have any toxic effect on corals, etc, but is deadly for fishes. It must be made quite clear, however, that to date there have been only very rare reports of mishaps with sea cucumbers in the aquarium! 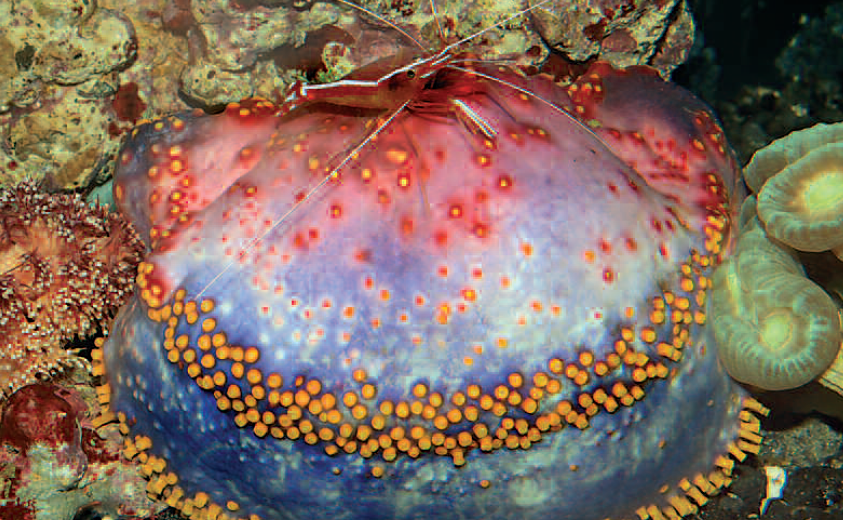 Pseudocolochirus are also known as sea apples. They seek out quiet spots for themselves in the aquarium.