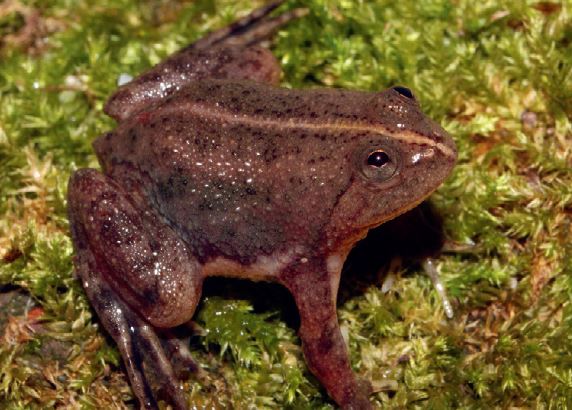 The maintenance of many aquatic frogs is largely something for dedicated animal enthusiasts who are prepared largely to overlook the fact that decorative planting of the aqua-terrarium is not entirely compatible with their pets. As the vast majority of aquatic frogs, that is frogs that live year-round in the immediate vicinity of water, grow to significantly more than 5 cm long. So delicate plants don’t stand much of a chance in the long term… But for a while now there has been a little frog on the market that grows to only around 3.5-4 cm long and is perfectly suited to the attractively planted aqua-terrarium: the Green Puddle Frog, Occidozyga lima.

This little frog has a vast distribution that encompasses Cambodia, China, Hong Kong, India (West Bengal), Indonesia, Laos, Malaysia, Burma, Thailand, and Vietnam. However, the species isn’t equally common everywhere. In parts of its range this frog is common in association with human cultures, but in West Bengal it appears to be far less commonplace, as the author of a scientific work on the amphibian fauna of the state had to rely solely on data from the literature: not a single preserved specimen was available! That may, of course, simply reflect the fact that the Green Puddle Frog is often overlooked because of its small size and in addition is of no economic value. In Hong Kong the once abundant population has purportedly almost completely collapsed for reasons unknown. These frogs are imported for the pet trade from Indonesia, where they occur in vast numbers, and hence can be purchased cheaply here in Germany.

Occidozyga lima is rather variably colored, but generally inconspicuous. Every specimen has its own individual coloration consisting of shades of gray, brown, and green on the upper surface of the body. The skin is warty. Two main color variants can be roughly distinguished, namely specimens with and those without stripes on the back. This is not a sexual characteristic. The males remain about 0.5cm smaller than the females and are more delicately built, but otherwise there are no noticeable external sexual differences. Even the throat sac of the male, with whose aid these little chaps can call very loudly, lies inside the body and is invisible when the frog isn’t calling. The churring-clicking call, usually a sort of “ae ae ae”, is far from melodious, but at the same time not so loud as to make the maintenance of Occidozyga lima inadvisable in the living- or bed-room. The underside of the body is just as uniform in color as the upper surface of the frog is variable. On the inner side of the front legs there is a dark stripe that continues along the edge of the belly as a flank stripe. Often there are extensions of these arm stripes on the breast as well, in the form of narrow bands at a 90° angle to the main stripe. A particularly striking feature is the L-shaped dark bands on the undersides of the hind legs; these are very characteristic of this frog species. Apart from the breast stripes, which are absent in some individuals, the underside is dirty white without any striking patterning. The eyes are sited high up on the head and allow the Green Puddle Frog an almost 360 ° view. This positioning of the eyes is closely linked to the ecology of the Green Puddle Frog. 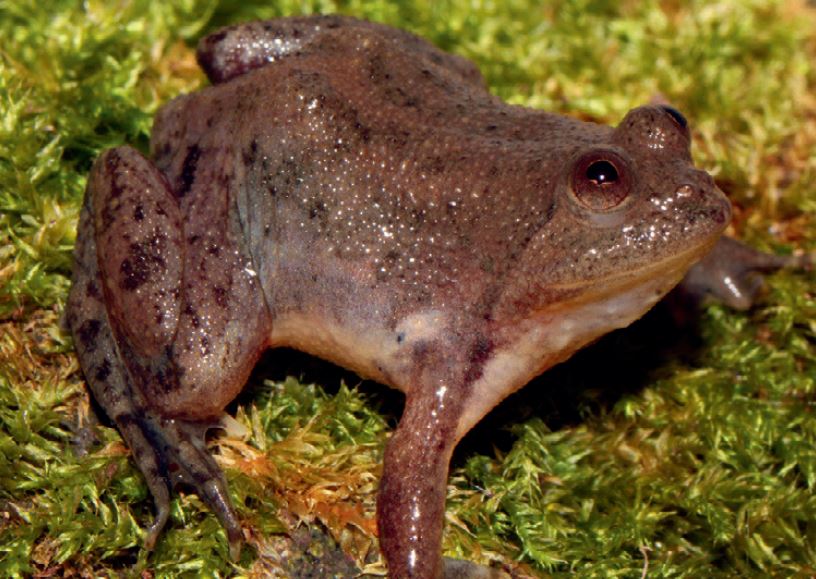 There are frogs that spend their entire lives under water. These include the honeycomb toads and clawed frogs well known in vivarium circles. They leave the water only exceptionally and then briefly, and come to the water’s surface only to breathe. Then there are frogs that usually sit out of the water but only so far from it that they can reach the wet element in a single leap. These include, for example, the aquatic frog Rana kl. esculenta, native to central Europe. These ubiquitous green frogs are stationary hunters that lie in wait for insects on land, driftwood, or water lily leaves, capturing the prey with a single leap. They don’t move around on land any more than necessary, and territorial battles with conspecifics, and indeed all their social behavior, take place in the water. The Green Puddle Frog has evolved a third form of life in water. It spends most of its life floating on the water’s surface, only occasionally leaving the water and scrambling onto a floating leaf or similar. Occidozyga lima hunts both above and below the water’s surface. It swims over to small insects that have fallen on the surface and captures them with its mobile tongue. But the Green Puddle Frog can also find submerged worms such as Tubifex and often stuffs these into its mouth with the aid of its forelegs, a behavior familiar from the clawed frogs. The high-up eyes serve not only for detecting prey, but also and in particular for spotting enemies. For many snakes, birds, and even larger frog species threaten the life of the little Green Puddle Frog.

So sehen die Tierchen von unten aus. / This is what the little frogs look like underneath.

The maintenance of these dainty little creatures is easy. They pose no particular demands regarding either water chemistry or food. A standard aquarium measuring 60x 30 x 30 cm is perfectly adequate for the maintenance of 6-12 specimens. The males sometimes fight among themselves, and this is interesting to watch as it looks like a boxing match when the little frogs meet while floating on the surface and attack each other with their front legs. These squabbles are, however, completely harmless. The aquarium must be only half filled with water, and the depth of substrate (fine gravel or sand is most suitable) should be 5-7 cm, so that the open water is only 8-10 cm deep. The aquarium must be topped with a cover glass as these little frogs are accomplished climbers. Gaps in the cover glass should be blocked with filter wool. Numerous plants will grow very well in the enclosed air space of the aqua-terrarium, for example sword plants (Echinodorus) or (more biotope-correct) Cryptocoryne. In addition there should always be some floating plants, for example Water Lettuce (Pistia) or Amazon Frogbit (Limnobium laevigatum), which will quickly spread abundantly. Until the plants are growing properly a piece of cork bark should be placed on the water’s surface so that the frogs have somewhere to rest when they so desire. The lighting – a single fluorescent tube is quite adequate for the tank – will raise the air temperature to 28-32 °C by day. At night, when the light is switched off, the air temperature will drop to room temperature. This closely matches conditions in the wild and is essential for the health of the frogs. Additional heating is required only if the temperature drops below 18 °C. 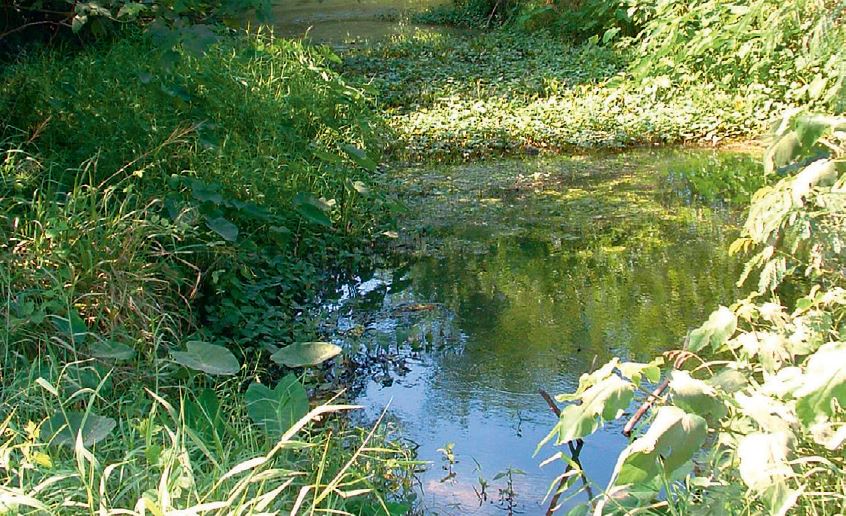 Habitat of the Green Puddle Frog in Thailand. 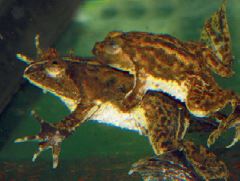 Any small insects can serve as food, for example fruit flies (Drosophila), small House Crickets (Acheta domesticus), and aphids. It is very interesting to watch these frogs hunting underwater, with Large Water Fleas (Daphnia magna), live bloodworms, and Tubifex being most suitable for the purpose.

Green Puddle Frogs can breed year-round, but our winter (November to February) appears to be the preferred breeding season, at least in the case of the specimens currently imported from Indonesia. The male embraces the female in the hip region. The eggs – which, depending on the size and condition of the female, can number between 50 and several hundred – have a diameter of 0.6 – 1.1 mm. The tadpoles are light olive in color and have a dark edging to the tail. They will eat the flake foods available in the trade for ornamental fishes. By the time of metamorphosis the tadpoles attain a length of up to 3.9 cm. A terrarium life span of more than five years has been reported, which is far more than the natural life expectancy of these little creatures in the wild.

The way of life of the Green Puddle Frog is the reason why the eyes are sited high up on the head.

Many books on this topic can be found at www.animalbook.de via BOOKS ABOUT FROGS!