The filefishes (Monacanthidae) are a family in the puffer assemblage (Tetraodontiformes), which means that their closest relatives include puffers, porcupinefishes, boxfishes, and triggerfishes. Externally they are most similar to the triggers, with which they share a locking mechanism for the first dorsal-fin spine. This mechanism serves to lock the dorsal-fin spine firmly in place. While the majority of the puffer assemblage have powerful biting tools with which to crack open mussels, snails, sea urchins, and the like, the dentition of the filefishes is  designed solely for feeding on small organisms.

It was this dentition and above all the associated feeding habits that first brought the filefishes to the attention of marine aquarists, as some  species are especially fond of consuming the “glass roses” (Aiptasia) that are such a nuisance in the coral-reef aquarium. However, these filefish  species are not trophic specialists. The species currently most frequently offered for combating Aiptasia is Acreichthys tomentosus, which has become so popular that it has acquired a whole set of common names – Aiptasia-Eating Filefish, Bristletail Filefish, Matted Filefish. 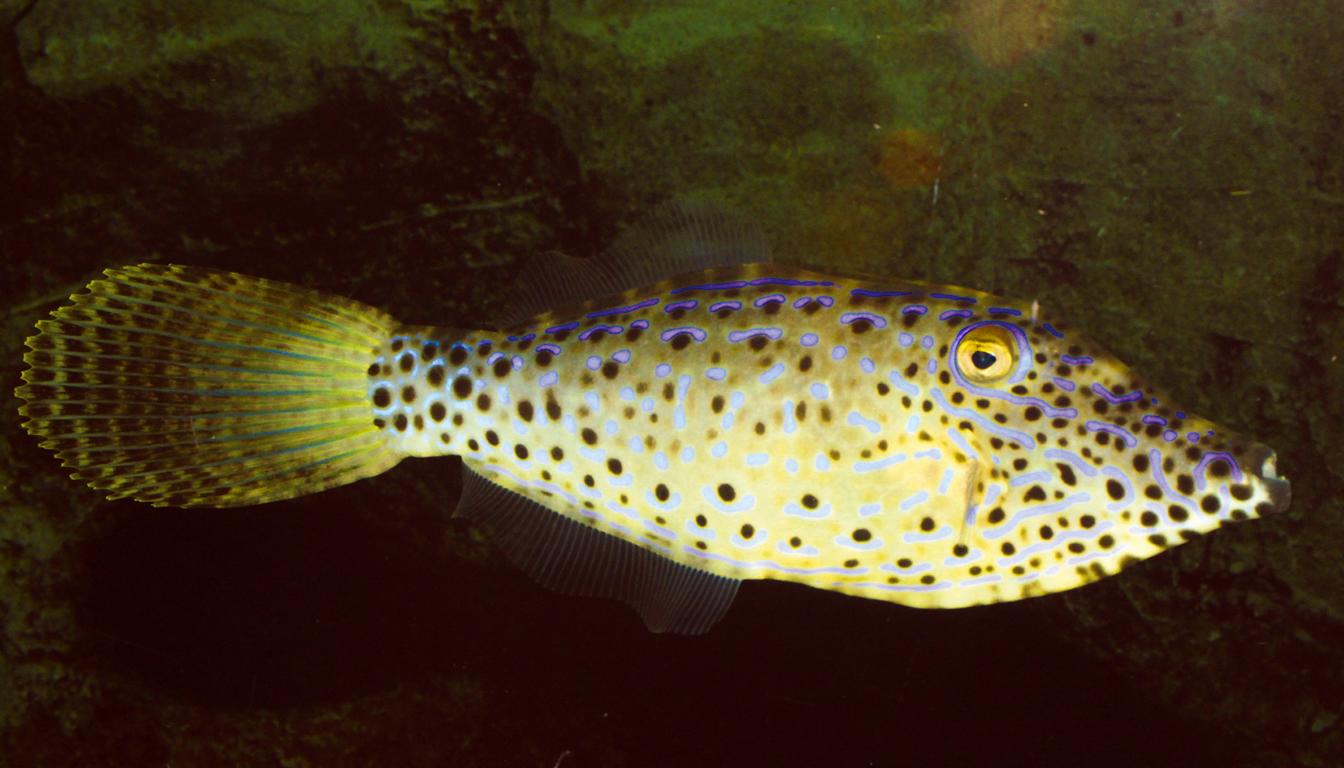 The Bristletail Filefish – the most popular of them all

This species is a very common and widespread fish. It occurs in large parts of the western Indo-Pacific and received its scientific name back in 1758 from the father of zoological nomenclature, Carl von Linné. With a maximum size of 12 cm (aquarium specimens, which are known to live considerably longer than those living in the wild, may perhaps grow somewhat larger), it is ideally suited to aquarium maintenance. Like almost all members of the puffer group, the Bristletail Filefish is not an active swimmer and hence doesn’t require much swimming space. Its coloration is such that it may easily be overlooked. As can be seen from the photos, it usually comes in assorted shades of brown and gray. But anyone who takes the time to observe these fishes more closely  will find that they are capable of rapid, mood-dependent  changes of color, and that immediately makes them more interesting. They can even turn bright green!

The Bristletail Filefish is very fond of eating Aiptasia, but will often also consume other sessile invertebrates. Hence long-term maintenance in the  coral-reef aquarium is only sometimes possible, as there are considerable differences in the habits of individuals. The ideal is to have a fish-only tank available as well as the reef aquarium, so that the Acreichthys tomentosus can be transferred to the former when the Aiptasia have all been  eaten. Because the totally eradication of these survival specialists can be achieved only with difficulty, the filefish needs to be returned to the reef aquarium from  time  to  time.  So  it  is  definitely  not  a good  idea  to  give  it  away  after  the  first plague has been eliminated. 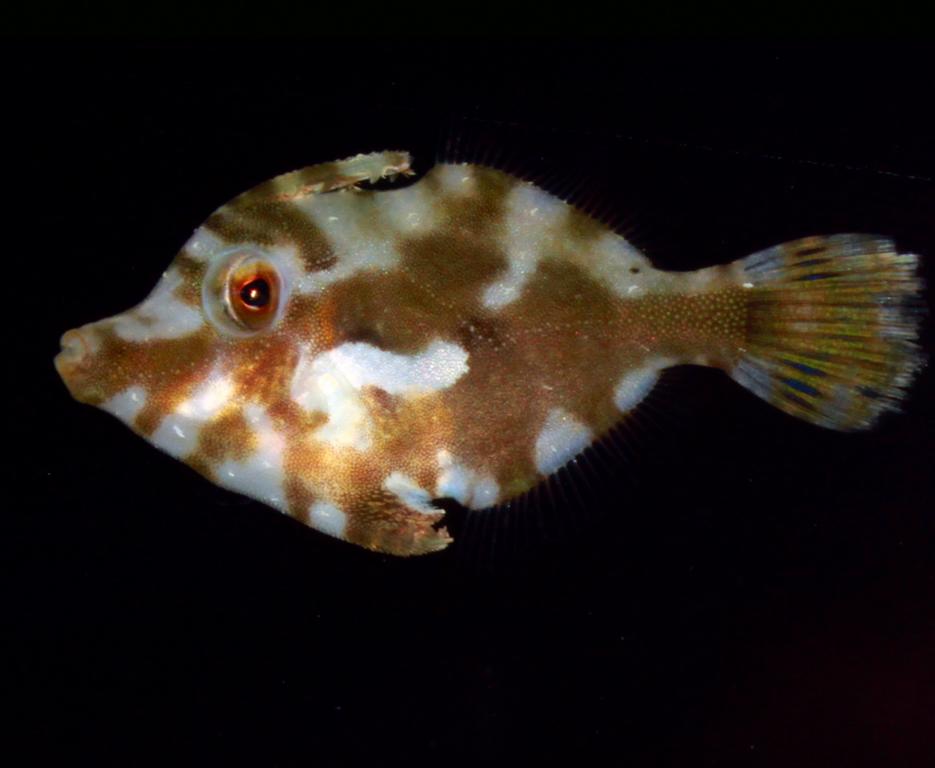 The Harlequin Filefishes – the loveliest of them all

Only a few of the roughly 100 filefish species currently known are noted for their bright coloration. But there are two exceptions: the Harlequin  Filefishes (Oxymonacanthus longirostris and O. halli). The two species look so similar that until the 1950s they were thought to be a single species. Only then was it realized that the Harlequin Filefishes from the Red Sea were different to those from the Indo-Pacific, and they were described as O. halli. Both these species are again common and widespread and grow to only 10-12 cm long, but unfortunately they cannot be recommended for the marine  hobby in general. They are extreme trophic specialists that feed exclusively on polyps of the stony coral genus Acropora in the wild. In addition  these fishes are sociable, such that specimens kept singly waste away. It is in fact possible to get Harlequin Filefishes used to substitute foods (E. Thaler managed it with frozen glassworms, which she placed in dead Acropora branches using forceps). Such acclimated fishes may even spawn in the aquarium. But difficult species like this are best reserved for specialists who know precisely what they are letting themselves in for. Because, as already mentioned, these fishes are common and widespread, it isn’t a problem to import them when required. 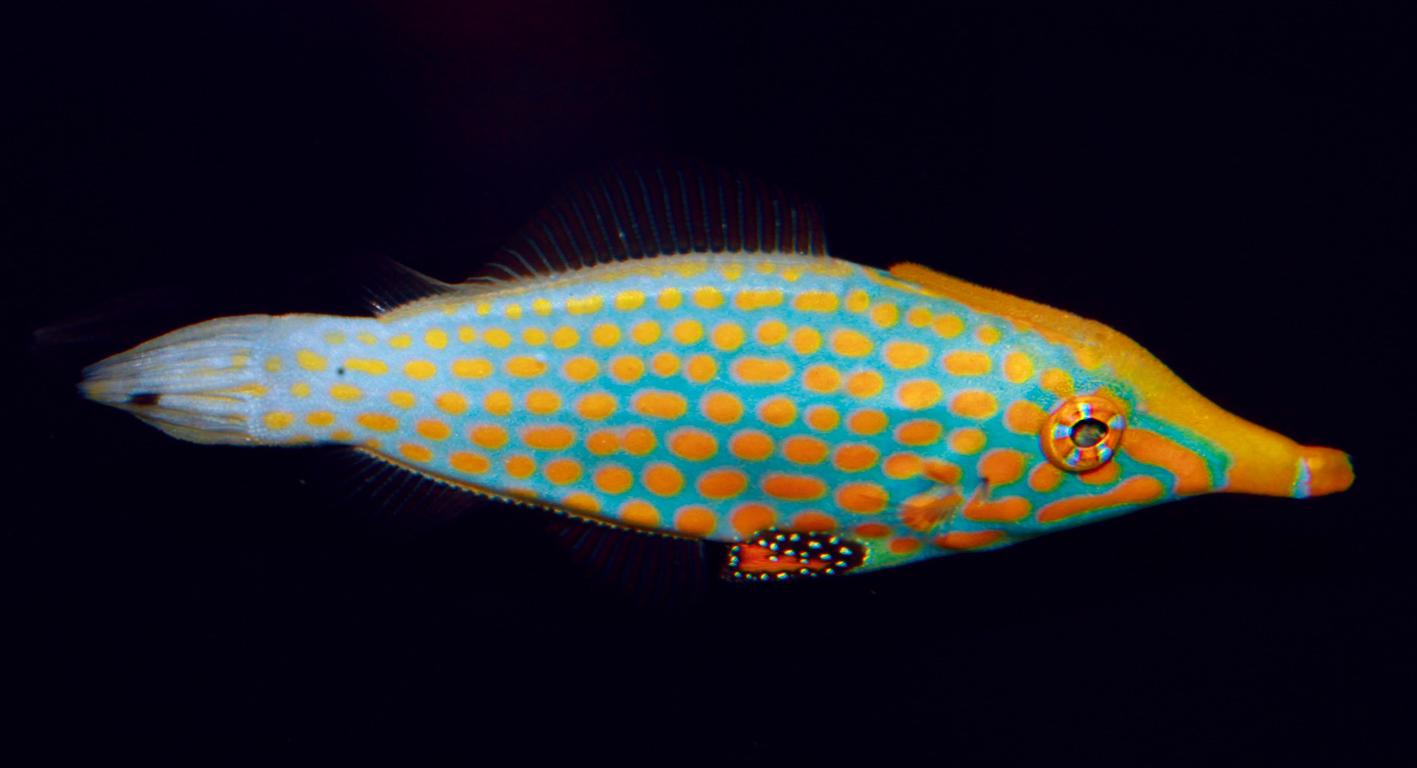 The Scribbled Filefish – the largest of them all

The majority of tropical filefishes remain manageably small and can be purchased without too much thought as long as a fish tank is available, because  the main distribution of the somewhat larger filefishes lies in subtropical waters where no exportation for the aquarium hobby takes place. Here the fishes are so common that they are even caught as food. While the majority of the members of the puffer assemblage mentioned earlier are deadly poisonous when consumed, this doesn’t apply to the filefishes. At least not in most cases. As the Scribbled Filefish (Alutherus scriptus), a species  distributed worldwide throughout the tropics and which can grow up to 110 cm long, sometimes takes its revenge on people who eat it via ciguatera poisoning. This can arise through the consumption of otherwise non-toxic fishes if the poison from an alga has accumulated in their flesh. But  aquarists don’t normally eat their pets, of course. It is nevertheless important to be familiar with the Scribbled Filefish in order to avoid accidentally buying it as a dainty youngster. The long caudal fin makes the species easy to recognize. In public aquaria, however, the Scribbled Filefish is, of course, a real eye-catcher, as it is very attractively colored. The species presents no difficulties as regards feeding, as it is a rather opportunistic omnivore. 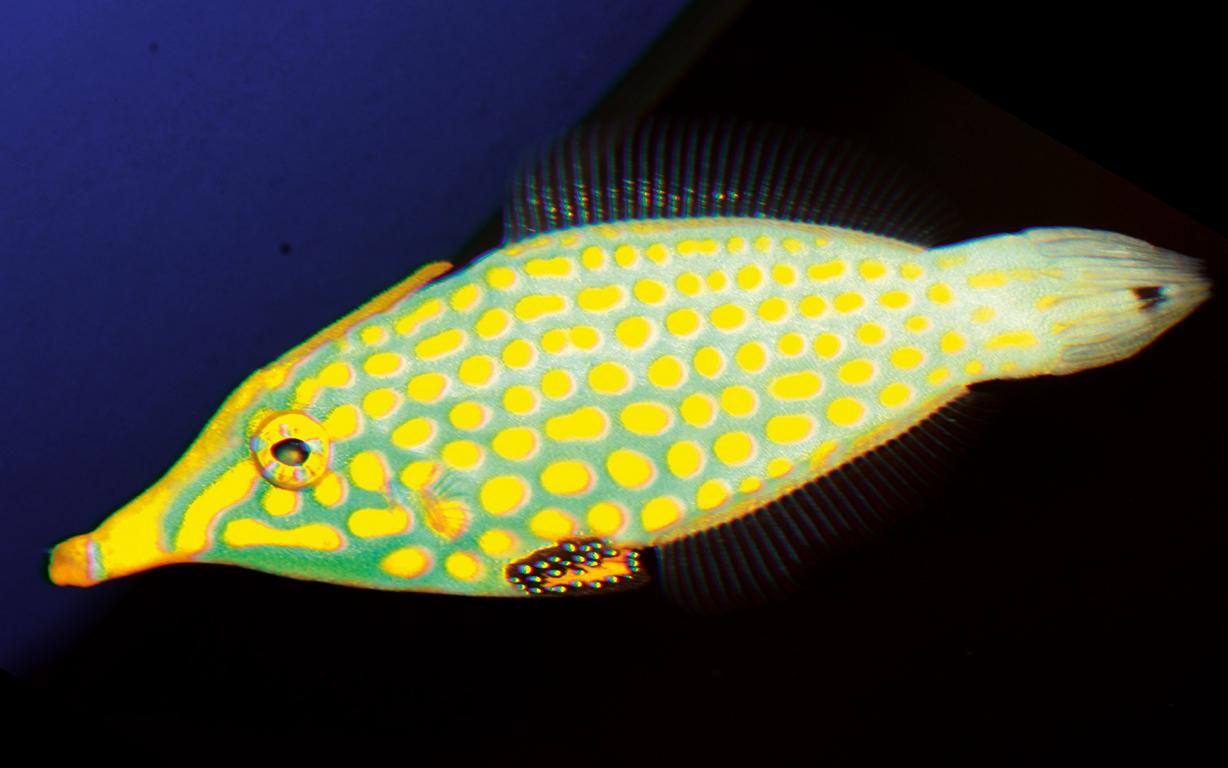 The Blackbar Filefish – the most interesting of them all for the hobby?

This filefish species, correctly termed Pervagor janthinosoma, is again widely distributed in the Indo-Pacific. It too grows to only around 12-14 cm long. The Blackbar Filefish is significantly more aggressive towards conspecifics than the previously mentioned species, which can readily be housed with conspecifics, and in the case of Oxymonacanthus even should be. Nevertheless one should always try to put pairs of this species together. So far  not much has been published on the Blackbar Filefish. There are reports that the species is difficult to get to feed, but these are mostly ancient (before 1980) and it isn’t completely clear whether the problems may not have been down to inappropriate treatment of the fishes. When adult (around 8 -10 cm in length upwards) the  Blackbar Filefish usually lives in pairs. The male can be recognized by rough, bristle-like scale structures on the  caudal peduncle, which are absent in females. Should Pervagor janthinosoma turn out to be a good Aiptasia-eliminator, which also looks attractive and  can be bred, then it would certainly be the dream filefish for the reef hobby. However, it must be stressed once again that there are as yet far too few experience-based reports available on this fish, let alone on breeding it. 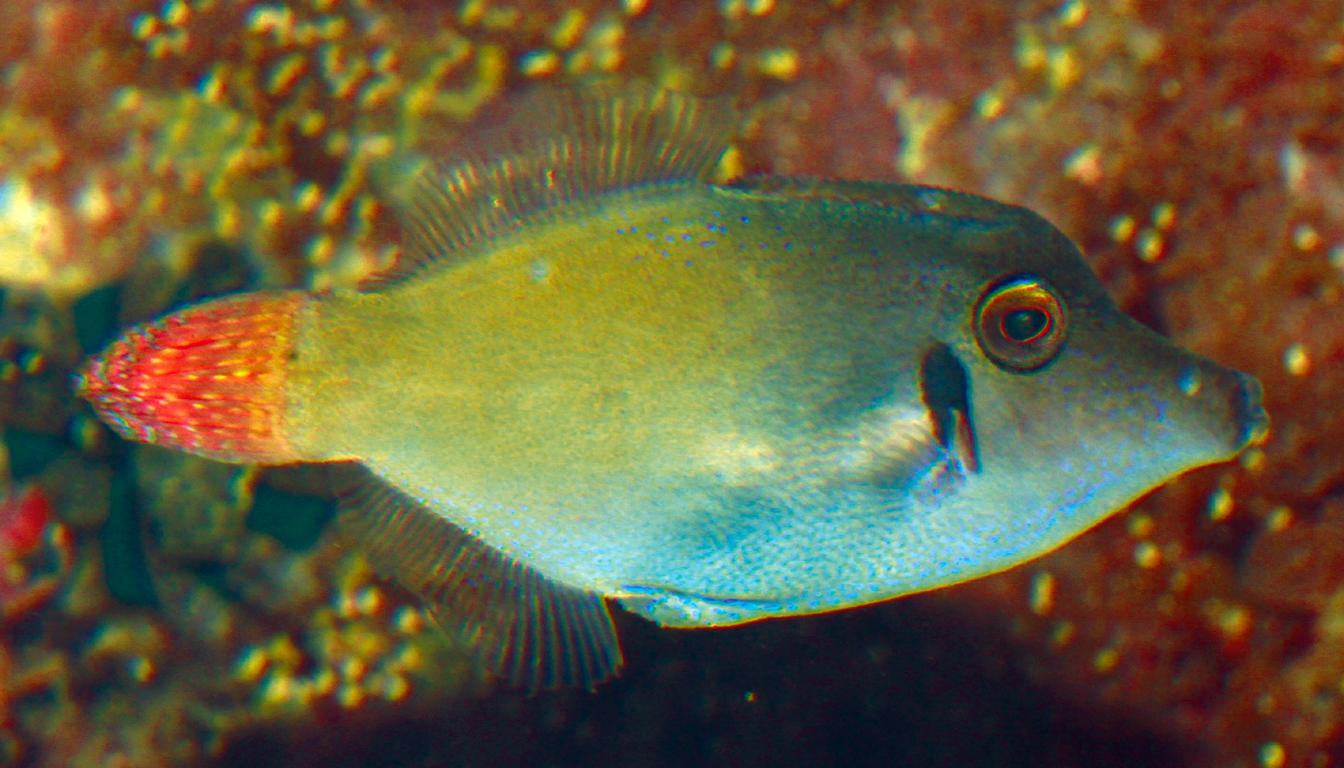 Filefishes have proved fairly amendable to attempts to breed them. Even the extremely tricky Oxymonacanthus have already spawned in the aquarium. However the Bristletail Filefish is probably the only species that has so far been bred with any degree of success worth mentioning. Unfortunately the sexes cannot be distinguished in the youngsters usually available in the trade, and only with the arrival of sexual maturity do males develop the spiny scales on the caudal peduncle, already mentioned for Pervagor, that have led to the popular name of Bristletail Filefish.

Hence it is best to obtain 5-6 youngsters and wait for them to form pairs. The fishes spawn in pits in the bottom that are stringently defended by the male. The young will readily take the usual plankton (rotifers, plus phytoplankton) cultivated by private breeders, the main difficulty in rearing being maintaining a sufficiently high food density – the young filefishes should always literally be up to their fins in food – and at the same time the water quality mustn’t be allowed to deteriorate too much.

All in all, filefishes are interesting aquarium fishes, about which there is still much to learn. And we haven’t even discussed here the fact that there are filefishes that imitate the highly poisonous puffers. But more of that another time, maybe…

If you are now filled with the desire to keep filefishes, then your pet dealer can undoubtedly order one or another species for you from a wholesaler of his acquaintance, for example Meeresaquaristik Reising in Alzenau-Wasserlos, Fax +49(0)6023-31502.