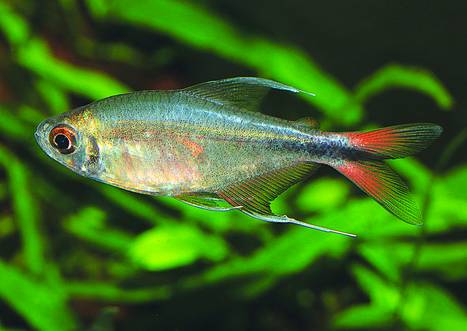 The Phoenix is a mythological bird which, according to legend, periodically combusts spontaneously and is subsequently reborn from its ashes. It is often portrayed as a golden bird with a red tail, and is regarded as a bringer of good luck.

The tetra that forms the subject of this article has a little in common with this mythological bird, specifically it has an attractively colored red tail and a delicate golden sheen on the body. But the Phoenix Tetra also reflects the bird to some degree in the figurative sense: it turned up once in the aquarium hobby and then was forgotten again; but now it seems to have been resurrected again!

There is every indication that the Phoenix Tetra is a scientifically undescribed species that should provisionally be assigned to the genus Hemigrammus. These attractive fishes measure around 3.5 – 4 cm long and were imported from Brazil as Hyphessobrycon stegemanni. Because H. stegemanni is a rather poorly known little fish and hence the research between importation and provisional identification might easily take several weeks, the Phoenix Tetra was initially labeled Hyphessobrycon cf. stegemanni.

In the course of the research it then turned out that the Phoenix Tetra had already been imported previously, specifically in 1989. At that time Lothar Seegers and Jacques Géry classified it, along with a number of other newly imported tetras, as “S7” in the magazine DATZ. An attempt was being made to establish an S-Number system for tetras, analogous to the very successful L-Number system used for undeterminable loricariid catfishes; however this endeavor came to nought. Without being able to examine the fish more closely, Seegers and Géry S7 regarded it as close to Hemigrammus brevis, but considered it to probably be an as yet undescribed species. On the basis of the accompanying photos there is no doubt that S7 and the Phoenix Tetra are identical. However, the maximum size of 5 cm given for S7 hasn’t been attained by the Phoenix Tetras currently available in the hobby, regardless of whether wild-caught or tank-bred. 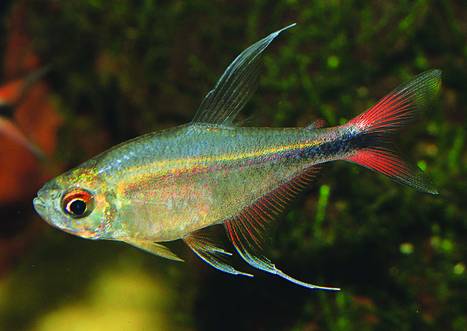 The source locality of the Phoenix Tetra

As a rule it is very difficult, often even impossible, to discover the precise locality for a commercially imported fish. This is mainly because the exporter of the fish doesn’t usually catch them himself, but buys them in from suppliers. And the supplier is likewise not normally the collector, but in turn buys fishes from the collectors. None of the links in this chain has any particular interest in divulging a collecting site and thereby making things easy for the competition. So here in Europe we usually learn only from what river system a fish originates, though that too is often very helpful.

In the case of the Phoenix Tetra things are somewhat different, as the fishes that were classified as S7 in DATZ were collected by Arthur Werner himself during a research trip in 1988. So we know that the first time round the Phoenix Tetra was collected at Filadélfia in the drainage of the Rio Tocantins (7° 20’ 9’’ S, 47° 29’ 24’’ W). 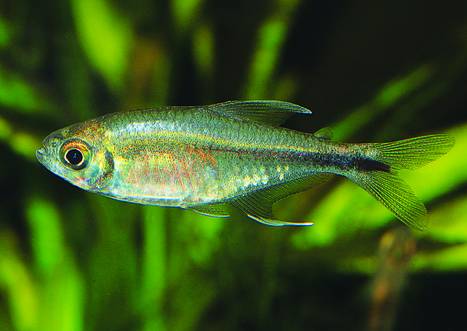 Last year (2010) Aquarium Glaser in Rodgau imported the Phoenix Tetra again under the name H. stegemanni, and they were purchased under this name from an ornamental-fish wholesaler in the region. Some of these fishes found their way into the hands of the well-known aquarist Dieter Bork, who lives near Hanau, and he grew these unremarkable little fishes on and was very taken with them. He bred them and gave the offspring back to Aquarium Glaser – full circle. Bork also made the staff at Aquarium Glaser aware of the original source of these attractive fishes.

Now it is not the case that a fish importer just sends an order for a desired species to the country of origin and gets what he requires a few days later; the import business is exceptionally complicated. Nevertheless after a number of weeks Aquarium Glaser was able to again obtain “Hyphessobrycon stegemanni” from the exporter in question. Unfortunately, however, there were only a very few Phoenix Tetras in the consignment, the majority of which consisted of another scientifically undescribed species that Seegers and Géry had termed S9 (Cheirodon? sp.). At present this fish was known in the hobby as 7 Rays Mint Tetra. Other bycatches were Astyanax goyacensis and Ctenobrycon hauxwellianus. 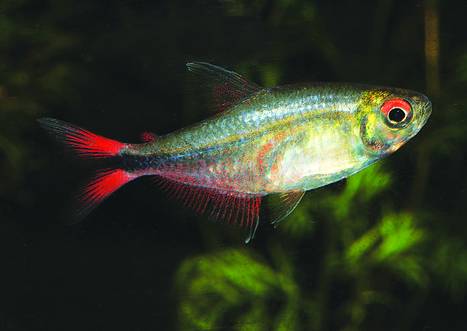 It is quite normal for there to be certain differences between wild-caught and tank-bred. In the first place, living conditions in the aquarium are a veritable paradise compared to in the wild. Tank-breds – including tetras – usually grow significantly larger and build up appreciably more body mass than specimens living in the wild. In addition, in the wild in South America, at least at certain times, there are hardly any fishes with undamaged fins, as a multitude of fish species have specialized in fin-eating. Tank-bred Phoenix Tetras in any case exhibit wonderful prolonged dorsal and anal fins, something rarely to be seen in wild-caught specimens, at least in the first weeks after importation. 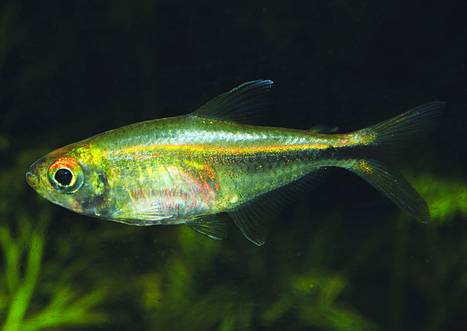 Phoenix Tetras are not only fabulously beautiful, but also exceptionally easy to maintain. They should be kept in a group of at least 10 specimens, as then they will exhibit their full behavioral spectrum, and in particular the males will then constantly be squabbling and displaying. They will eat all the usual fish foods; moreover the Phoenix Tetra is totally peaceful and even undemanding as regards the composition of the water. The breeding procedure follows the typical small tetra pattern. The males are very ready to display in soft, slightly acid water at around 28 °C.

Let us hope that the name Phoenix Tetra will bring these fishes luck and that this time they become established in the hobby!