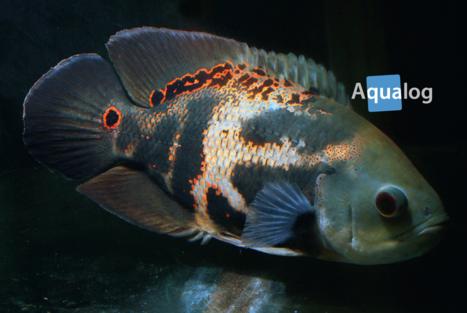 Large cichlids from South America are not always the most popular of aquarium fishes. Leaving aside their physical size, they like to dig, regard smaller tankmates and aquatic plants as part of their diet, and at breeding time make it abundantly clear to every other occupant of the aquarium who is cock of the roost. For this reason the majority of aquarists prefer to look at these impressive fellows at the zoo rather than at home. With one exception: Astronotus ocellatus, the Velvet Cichlid or Oscar.

The unusual name ”Oscar” for this cichlid has become established internationally, but is also known in English as the Velvet Cichlid or Marbled Cichlid.

Why the Oscar is called Oscar
To be honest, nobody really knows the precise answer, though it is certain that the name originated in the USA. In 1936 an article by E. W. Clarke on Astronotus appeared in the hobby magazine The Aquarium. Clark owned a pair called Lena and Oscar. In 1949 Gene Wolfsheimer reported in The Aquarium Journal that aquarists in California were referring to Astronotus cichlids as Oscars (Wayne Leibel, Aquarium USA Annual 2001). But it is also possible that the word Oscar is a corruption of the scientific name or of the Tupi word acara for all sorts of large cichlids. Tupi is the language of the aboriginal people that lived in Brazil before Europeans arrived in the Americas.

Widespread
Astronotus originate from South America, where they live in the major rivers of the Paraguay, Amazon, and Orinoco drainages, as well as those of the Guiana Shield. They are prized and popular as food fishes throughout their range. Nobody knows how many species of Astronotus actually exist. The genus is, to put it politely, in need of revision. Generally speaking, only two species are recognized by science, A. ocellatus and A. crassipinnis, but a total of seven species have been described in the past. The majority are now regarded as synonyms of A. ocellatus, but in the view of some people at least this is undoubtedly incorrect.

Oscars in the aquarium
The first Oscars were exported to Europe in 1929. Because they are relatively undemanding and attractively colored they were among the favorite large cichlids that people brought back from South America. We mustn’t forget that in the past importations were made by ship and animals were usually brought back by seamen to supplement their income. This meant that the fishes were in transit from Brazil for 3-4 weeks, often longer, in so-called fish cans. Although we shouldn’t underestimate the know-how of the fish transporters of those days, the fishes needed a certain amount or resilience to survive. Then again, the first successful exports of discus took place back then…

Large and spectacular
Oscars are among the largest aquarium fishes normally seen in the trade, and can attain a length of up to 40 cm. That size is in fact exceptional, but can be achieved by long-lived specimens in huge aquaria. Almost all the individuals seen in the trade are captive-bred in South-East Asia. Wildcaught specimens are only very rarely offered for sale and are then always labeled as such. Anyone with an aquarium 150 to 200 cm in length should definitely try their hand at keeping Oscars in it. These fishes can become exceptionally tame and provide their owner with a lot of enjoyment, plus they become more attractive with every centimeter they grow. Oscars can, however, often cause a lot of trouble in smaller aquaria, as after all they are cichlids and defend their personal territory fairly energetically. Because Astronotus rapidly grow to 15-20 cm long even in smaller aquaria, a meter-long tank is not too small for a single Oscar, with no other fish(es) sharing the tank. For this reason it is better not to buy Oscars unless a really large aquarium is available.

Productive open-brooders
Oscars breed in pairs, with both male and female sharing equally in the care of eggs and fry – often more than 1000 per brood! The sexes can be told apart only with difficulty (females remain smaller and have a more pointed head profile), so the best way to obtain a pair is by growing on a group of youngsters and letting them choose their own mates. There are good reasons why Oscars are not usually bred commercially in Europe. Rearing the ever-voracious brood to saleable size costs more in time, electricity, and water (not to mention food) than they fetch when sold. But matters are completely different on the rare occasions when wild caught specimens – such as the spectacular Zebra Oscar – are imported!