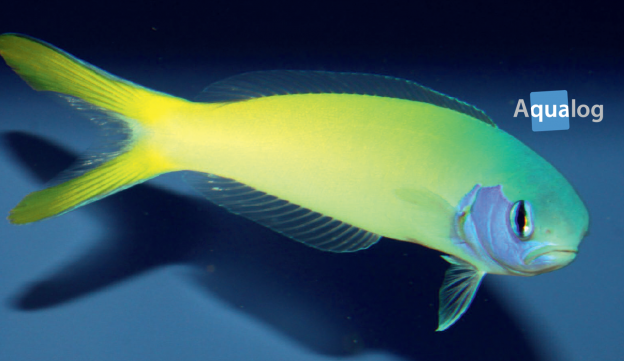 Many people regard the fantastically colorful coral reefs as the most species-rich fish grounds on Earth. But that is a huge mistake. Compared to the multitude of freshwater fishes (around 16,000 species), the number of coral fish species (around 2,200) is rather small. Nevertheless there are so many that a single lifetime would be insufficient for the aquarist to keep them all. That is a great shame, as practically nothing is known about some species. These include the tilefishes of the genus Hoplolatilus, which we will introduce to you in more detail below.

The tilefishes are a genus in the family Malacanthidae, which contains only two genera, Malacanthus and Hoplolatilus, with a total of 16 species. Malacanthus is unimportant for the aquarium hobby, as the three species known are too large (about 30 cm) and colorless to attract significant numbers of fans; by contrast some of the 13 known Hoplolatilus species are very attractively colored. None grows larger than around 15 cm, and the majority remains noticeably smaller. 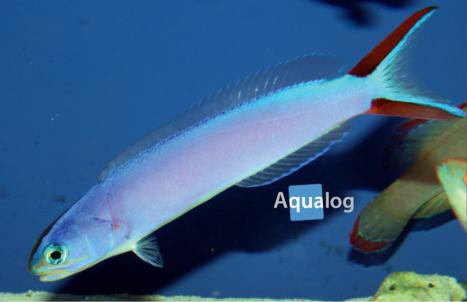 Burrowers at the foot of the reef
Tilefishes are not found on the reef itself. They require holes to live in, and dig these in the sand or live in caves at the foot of the reef or in piles of rocks. For this reason they live at the bottom edge of the reef, at depths of 20 meters or more, usually considerably deeper. This means that full diving gear is required to collect them, and they must be painstakingly decompressed, i.e. brought to the water’s surface over a period of several days, to avoid the sudden change in pressure killing them.

Tilefishes live in pairs or small colonies. They never stray far from their burrows or caves, into which they retire lightning-fast when any perceived or actual danger threatens. For this reason in the past they were very often collected using anesthesia, but unfortunately the chemical used, a cyanide compound, had horrendous side-effects that frequently caused the death of fish and collector alike. Hence the battle against the use of cyanide to stun fishes is one of the most important tasks of the modern marine aquarium hobby. Properly collected and carefully decompressed tilefishes are gorgeous aquarium fishes, easy to maintain and very interesting. Peaceful planktonivores In the wild tilefishes feed exclusively on relatively small planktonic organisms.

Hence, depending on the species, they can be fed relatively easily using the large range of deep-frozen foods available today, e.g. Mysis, Artemia, mosquito larvae, chopped mussel flesh, fish roe, etc. The diet should always be as varied as possible, as this is the best way to avoid deficiency diseases. Cheap frozen food is a false economy and should never be used; the food should be top quality, and never thawed several times then frozen again, as valuable ingredients are lost every time this occurs. Many tilefishes will also learn to take dry foods, which are very healthy and easily digested, but must always be stored in a cool, dry, dark place and used within six weeks of opening, as otherwise vitamins and unsaturated fatty acids will be lost

Some species, in particular the gorgeous Blue-Faced (or Starck’s) Tilefish (Hoplolatilus starcki), eat only the tiniest food particles in the wild and will initially pay no attention to coarser morsels of food. When these fishes are in “hunger mode”, they are often even unable to digest frozen adult Artemia. In such cases they must be fed with home-hatched, live Artemia nauplii, if necessary enriched several times with unsaturated fatty acids. But this isn’t always the case: the fishes in the photos – taken at Meeresaquaristik Reising in Alzenau-Wasserlos – were eating and digesting “normal-sized” frozen food without problem.

Suitable for the reef aquarium?
From what has been said above it should be clear that the answer is “Yes and No!” Hoplolatiluswill not be happy in a brightly-lit aquarium full of stony corals, where the feeding regime is sparing. They prefer rather less light and two to four feeds daily. Even so, insofar as – being planktonivores – they leave sessile invertebrates completely in peace, they are generally suitable for the reef aquarium. But when keeping tilefishes the main consideration should be an interest in the fish species in question, rather than the desire to complement a beautiful reef aquarium with a decorative fish. 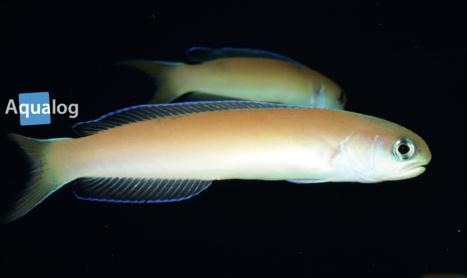 Group maintenance
Tilefishes never live solitary in the wild, but are always found in twos (pairs?) or groups. And that is how they should be maintained in the aquarium. And the group doesn’t need to be limited to members of their own species. Hoplolatilus are very peaceful among themselves, at most threatening with an open mouth, so no problem there. A special tank with assorted tilefishes is a real sight for sore eyes and offers a host of opportunities for study. But you should always try to buy at least two, better three or four, individuals of each species kept. Of course that is easier said than done; there are no external sexual differences and so it is necessary to rely on statistical probability in order to obtain both sexes. Literally nothing at all is known about spawning behavior or rearing the young. It is assumed that the eggs and sperm are simply released into the water column. The larvae live among the plankton and have peculiar spinous growths on the head region.

Caves, caves, and yet more caves
A fish like a tilefish needs suitable hiding places in order to settle in properly. Even though PVC pipe doesn’t look very nice it is ideal for the task in hand. In addition a whole range of ceramic caves are available in the pet trade, and although they are designed for freshwater fishes, tilefishes don’t mind that at all and accept them readily. The tank should also contain a number of flat stones, laid on an adequate depth of substrate beneath which the Hoplolatilus can construct their own caves. 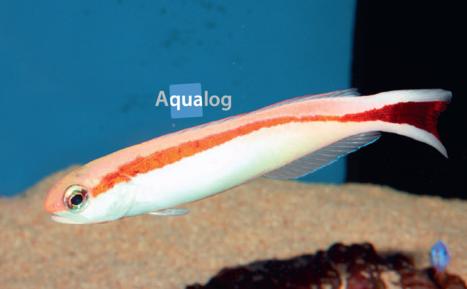 Escape artists
A completely escape-proof aquarium is an absolute prerequisite for the long-term successful maintenance of tilefishes. They can drive their owner mad by finding the tiniest gap and slipping through it. As it is highly improbable that a tilefish cherishes any ambition to escape, this behavior is probably attributable to an innate urge to investigate small crannies as potential hiding-places. This curiosity certainly makes sense in the wild, but in captivity always ends in tragedy, as the only thing that tilefishes find on the other side of a gap between cover glass and aquarium is the Grim Reaper. Hence it is best to install a continuous glass ledge, around five centimeters wide, all round the top of the tank.