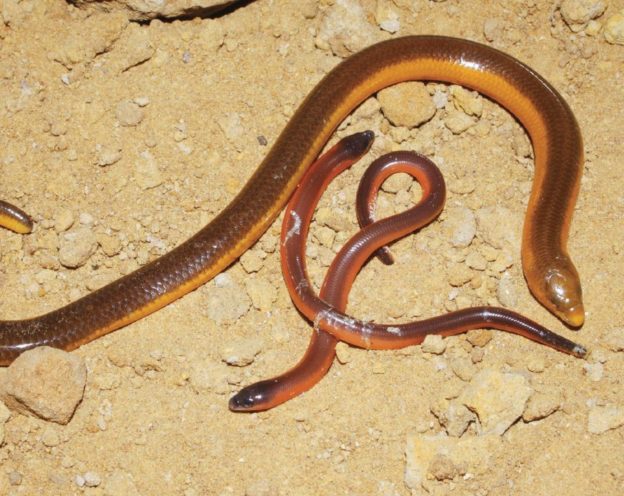 Percival’s Lance Skink is widespread in southern Africa, being found in Angola, Botswana, Namibia, Kenya, South Africa, Tanzania, and Zimbabwe, where it lives in savannah regions. This Lance Skink lives underground and is hardly ever seen above ground in the wild.
Percival’s Lance Skink has been imported from Tanzania. Its total length is around 15 cm. But the genus Acontias also contains one of the largest of all skink species, specifically Acontias poecilus, which wasn’t discovered until 1996, in South Africa, and grows to more than 38 cm long not including the tail, and a good 49 cm overall. In total there are six Acontias species and a number of subspecies, whose status is disputed, however. The type species of the genus is A. meleagris, described back in 1758 by Linnaeus, which lives in South Africa.
In Acontias percivali the sexes are best determined by viewing from above. The head of the male is comparatively broader than that of the female. The breeding season coincides with our winter. The species is viviparous and the juveniles are relatively huge. The female illustrated here was probably already gravid when imported and gave birth to two young on 15th January. The photo was taken on the following day. The birth took place in the presence of the male, who showed no interest in the youngsters. They were, however, separated off for their own safety, plus juveniles generally have a greater moisture requirement than adults. 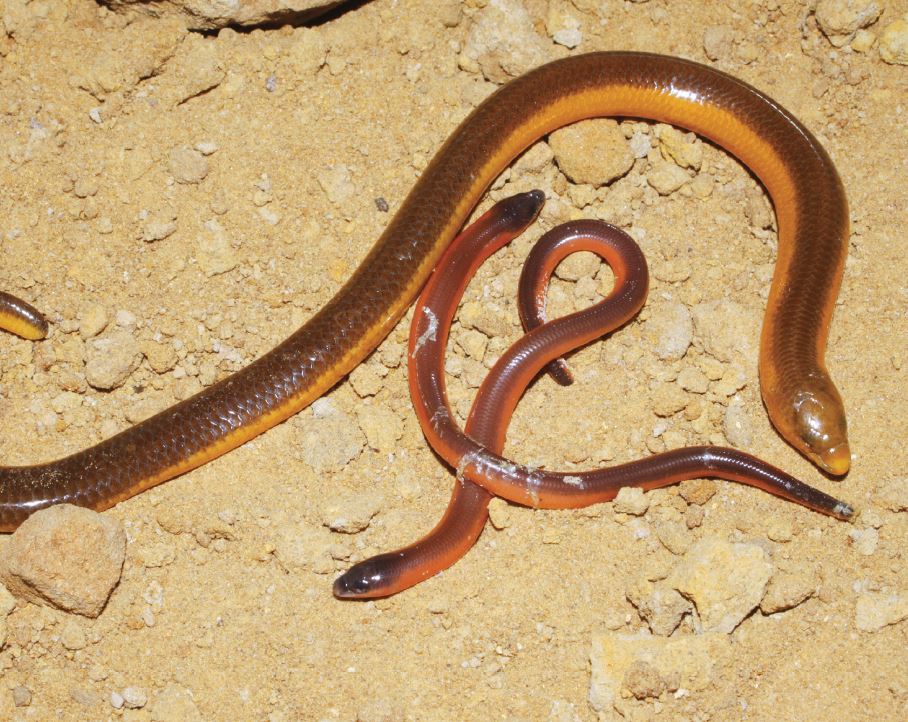 From what has been stated so far the maintenance of these animals may perhaps not sound very attractive given that they live mainly underground. But the opposite is in fact the case. Like the well-known Common Skink (Scincus scincus), Percival’s Lance Skink is generally seen from time to time once settled in. When handled they usually go into what looks like death throes, but they don’t actually die. One of the juveniles – which have all proved generally very lively – has even tried on one occasion to snap at the fingers holding it, a behavior never evinced by any of the 20 adult specimens.
Percival’s Lance Skink is best maintained in a terrarium with a layer of sand about 3 cm deep, so that if necessary the substrate can be rapidly searched for the occupants. Because these skinks sometimes drink they should always have a shallow dish of fresh water available. The sand beneath it should be somewhat damp so the skinks can seek out this spot if desired. The rest of the “furniture” is of no account to the skinks. They aren’t into sun-bathing so a “hot-spot” isn’t required. However, the temperature in the terrarium should be 21-25 °C.
The main foods of Percival’s Lance Skinks in the terrarium are mealworms and Buffalos; they will in fact also take other insects but have problems catching them. In the wild they also eat earthworms, but this has not yet been seen in the terrarium.

The male (rear) differs externally from the female in having a broader head.