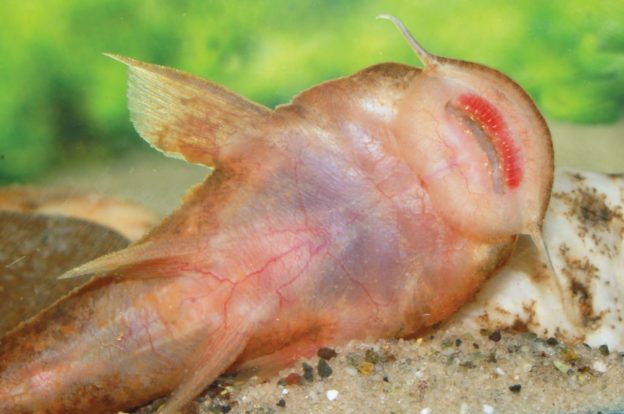 The L-number catfishes or Loricariidae from South America are among the most popular and greatly prized catfishes for the aquarium. But to date even experienced aquarists have only very rarely had the opportunity to see a live member of the genus Astroblepus.

Aquarium Glaser in Rodgau, Germany, has now imported these aquarium-hobby rarities for the first time, albeit only in very small numbers.

There are more than 50 species in the genus Astroblepus, and it is more than 100 years since any comparative scientific study was performed on them. The largest species of Astroblepus known to date is A. grixalvii from Colombia (Rio Magdalena basin), which can grow to around 30 cm. However, the majority of species appear to remain significantly smaller. Large or small, the flesh of the Astroblepidae is said to be very tasty and so they are eagerly hunted in their native lands.

The identification of the imported fishes would have been virtually impossible if the supplier hadn’t kindly provided details of the location where they were caught (thanks Carlos!). But we thus know that the fishes originate from the drainage of the upper Rio Ucayali, which significantly reduces the number of possible species under consideration. Although, of course, this method of identification cannot be 100% certain, our fishes are at least very similar to the described species Astroblepus mancoi and A. taczanowskii.

Without doubt the more attractive of the two species is A. mancoi, which has a variable pattern of “tiger stripes”. By contrast, A. taczanowskii is more or less orange-brown with fine marbling. Both species attain a length of around 8 cm. 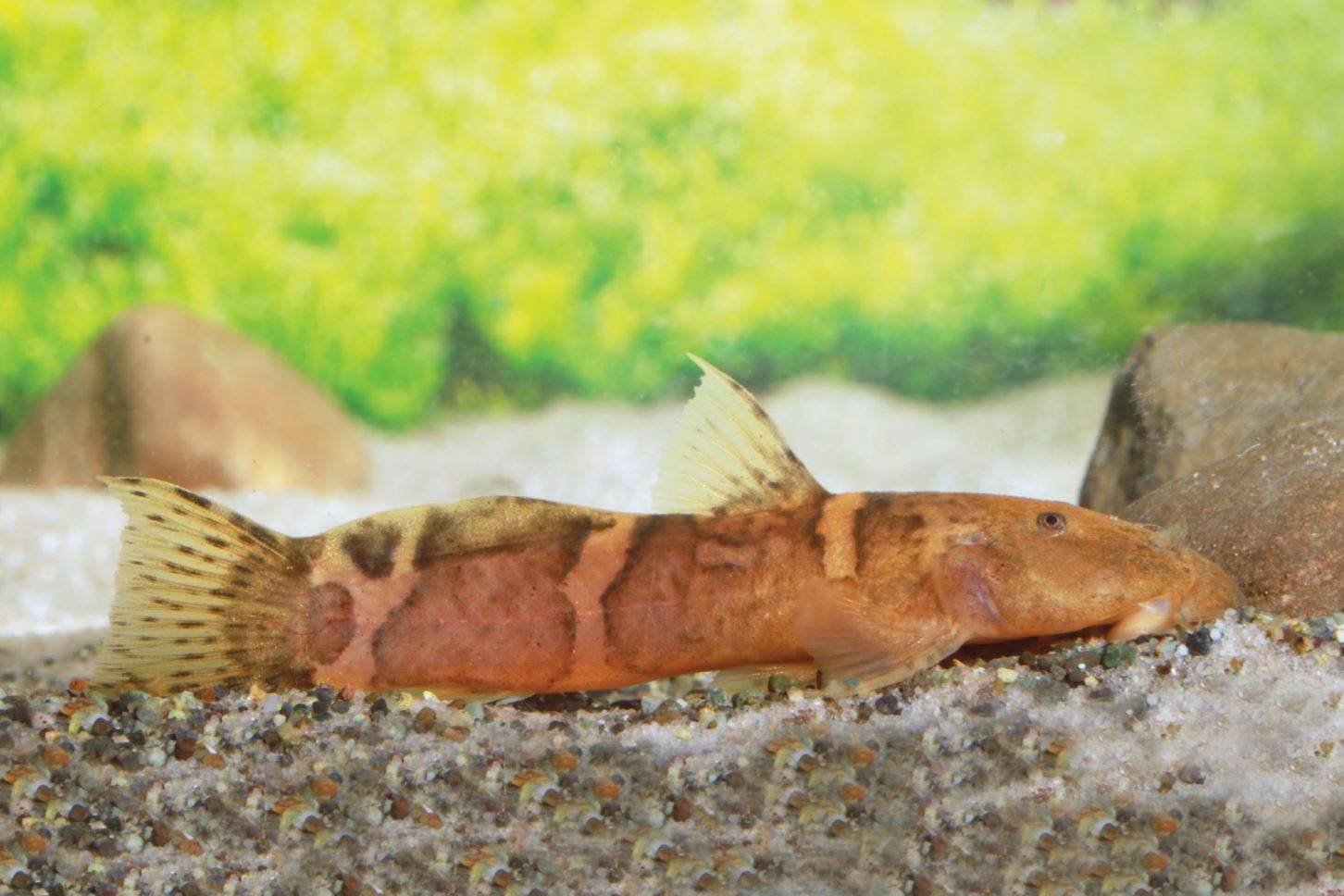 Astroblepus mancoi can be very variably patterned. As well as “tiger-striped” specimens like those … 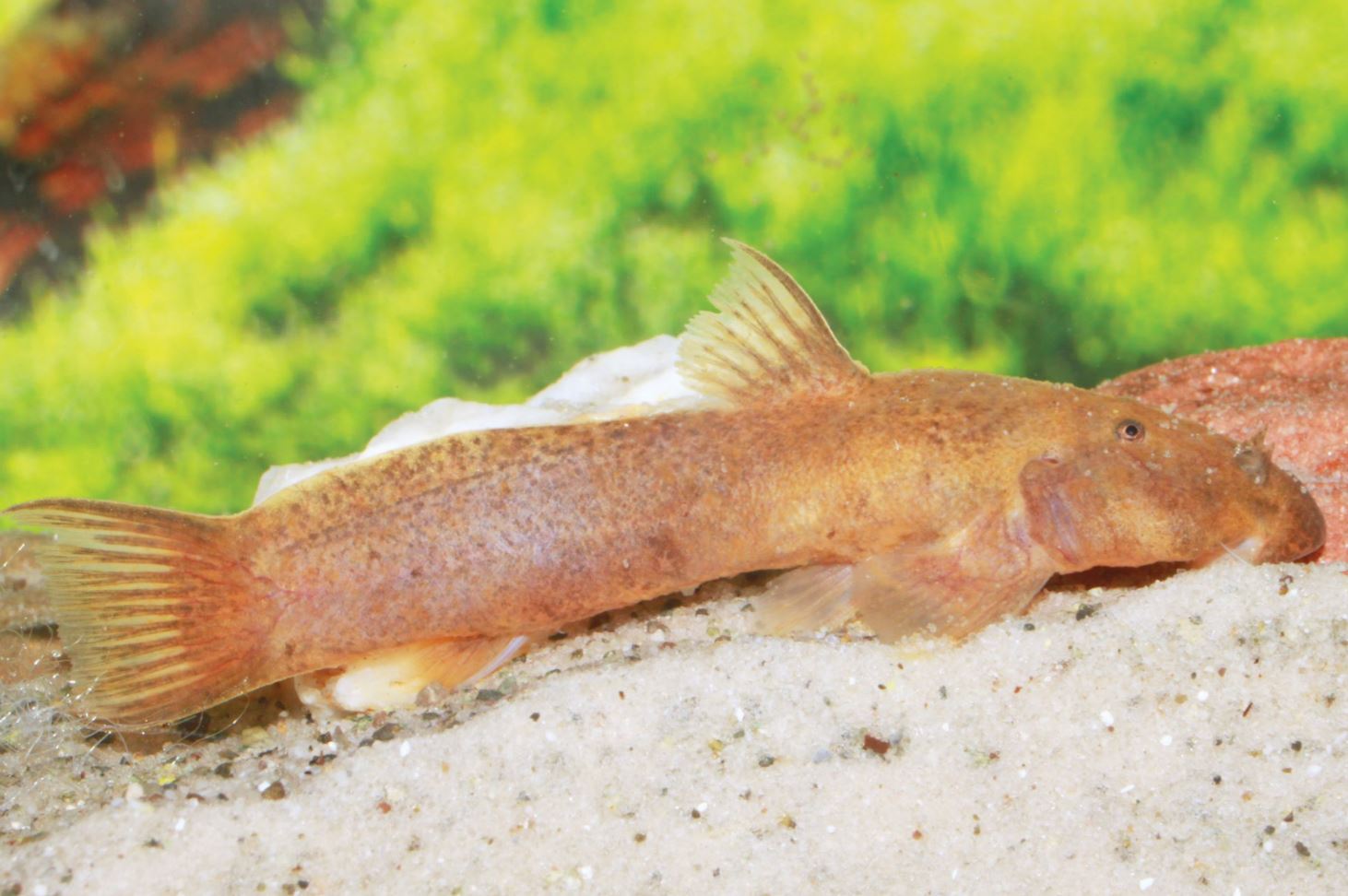 Astroblepus occur high in the mountains of the Andes and have been recorded at an altitude of 4,000 m above sea level. But there are also species that live only a few hundred meters above sea level. There is also a true cave-dweller, namely A. pholeter, which is completely unpigmented and has atrophied eyes. It is found only in the depths of a cave in western Ecuador, around 300 m to 2 km from the entrance to the cavern. This species has greatly prolonged fin filaments. It is extremely secretive and hence can be caught only with great difficulty. The food of this species appears to consist of insect larvae.

However, Astroblepus usually live in more or less fast-flowing waters, where they move around fairly actively. Observers have described their behavior as comparable to that of tadpoles.

Astroblepus are fantastically well adapted to fast-flowing water and have not only their suckermouths for the purpose, but also a movable attachment apparatus on the belly. These even enable the fishes to climb waterfalls against the fast-flowing torrent.

There is a report by a mining engineer who dammed a river in order to investigate a rock-cut basin in the river bed when the river subsequently ran dry. When the water, which was originally around 7 m deep in the basin, had dropped to less than one meter, the Astroblepus (they were the Colombian species A. chotae) began to migrate out of the basin by using their suckermouths and the attachment apparatus on the belly to climb up the damp walls of the basin. They climbed around 30 cm at a stretch, paused briefly, and then climbed further. In this way the fishes were able to escape from the basin as it ran dry. Subsequent closer examination showed that they had climbed a wall almost 6 m high that rose vertically or even overhanging at an angle of up to 30°. In addition, the wall was thickly coated with algae.

The Astroblepidae have a hole-like opening above the gill-cover so that they can breath even when using their mouths for attachment.

The imported Astroblepus species are Aufwuchs-feeders; their mouth and tooth structure strongly resembles that of many loricariids, especially that of the Ancistrus species. 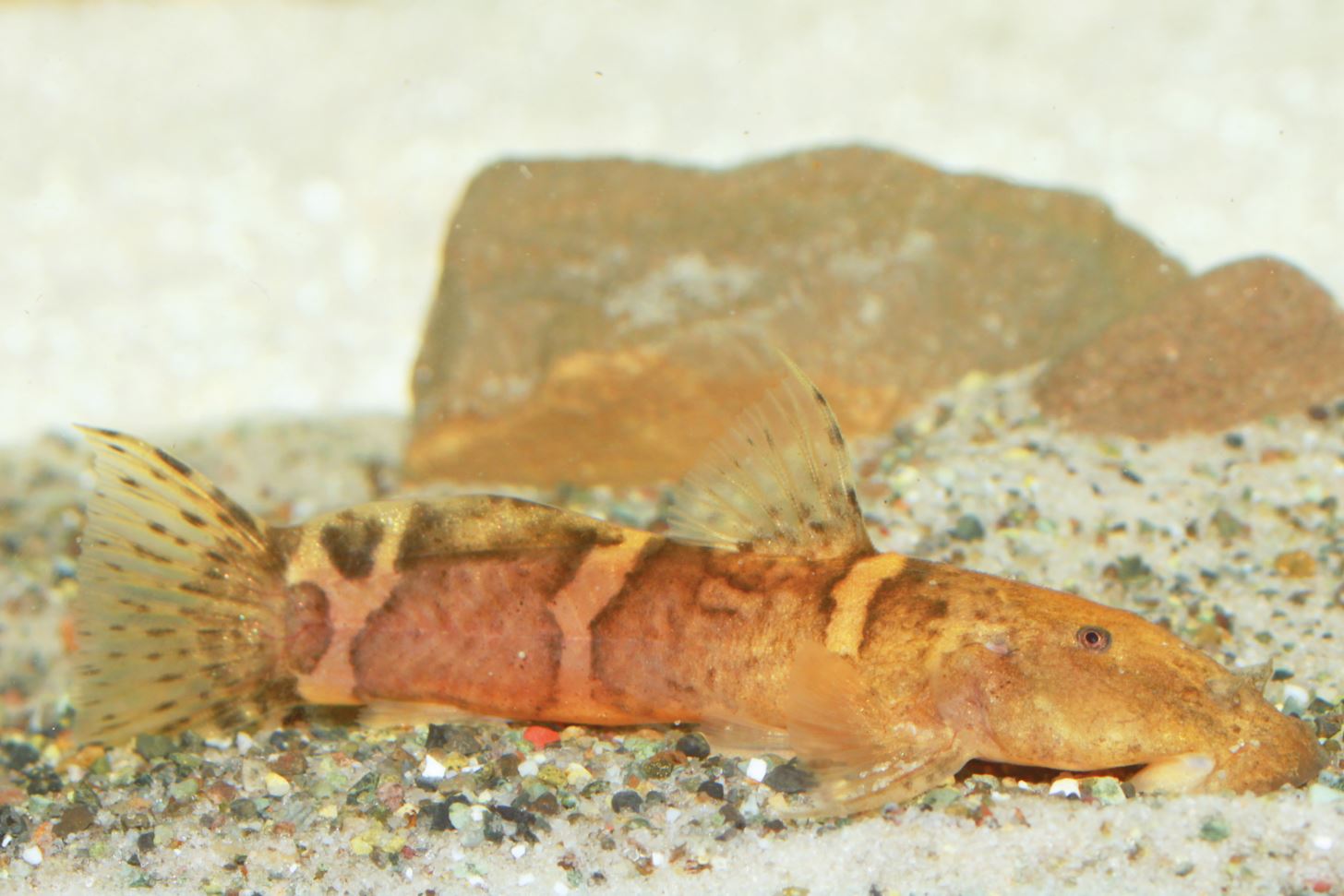 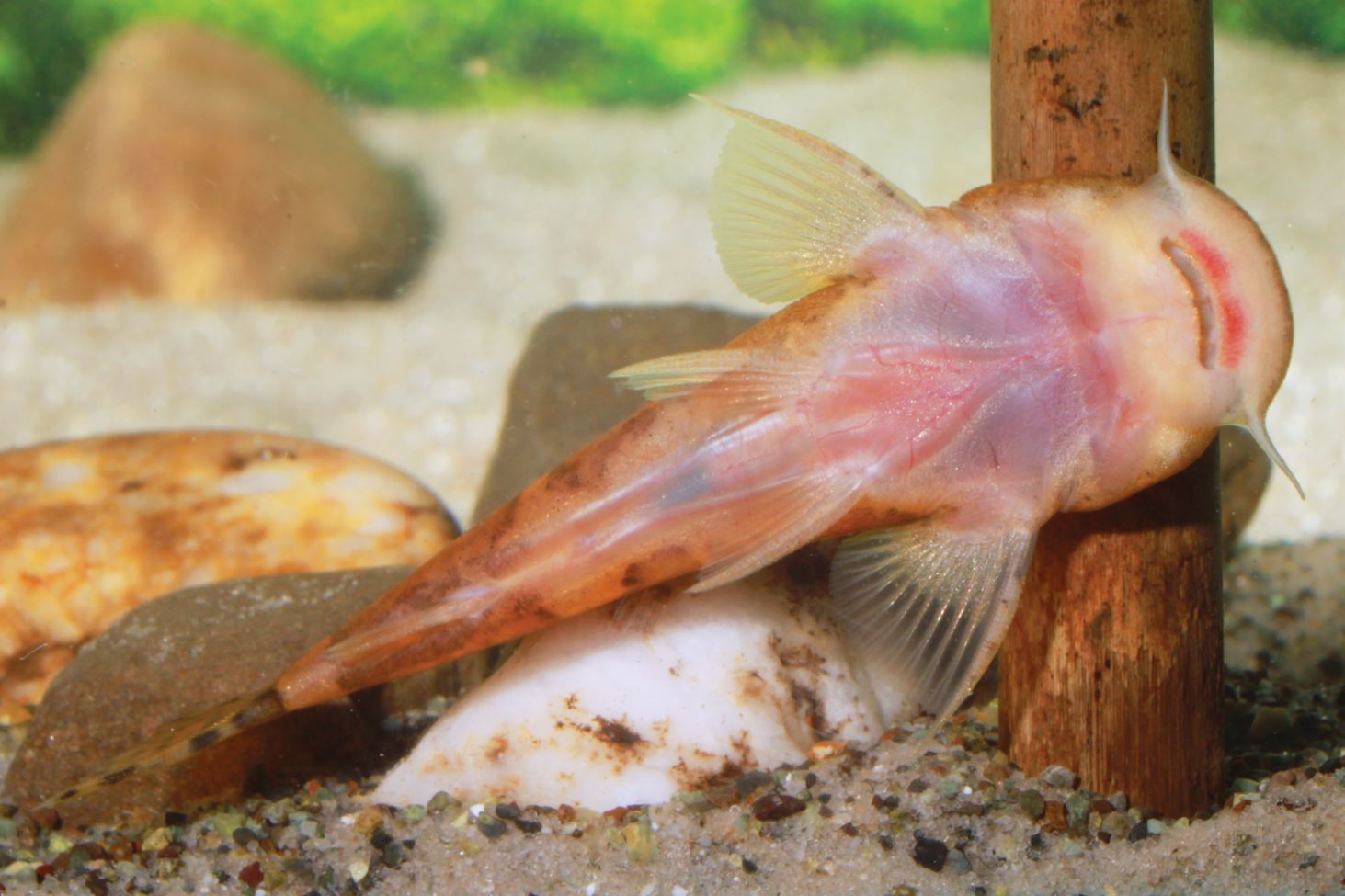 The underside of Astroblepus mancoi. The suckermouth and the attachment apparatus on the belly are clearly visible.

As far as is known, the only externally visible difference between the sexes is the form of the genital papilla, which is greatly prolonged in males, leading to speculation that fertilization takes place internally in these fishes.

As good as nothing is known about the reproductive behavior of Astroblepus species. The engineer mentioned above – his name was R. D. O. Johnson, by the way – observed occasional eggs attached to the underside of large rocks and thought they belonged to Astroblepus. These rocks were at the bottom of the deepest rock-cut basins in the river bed. 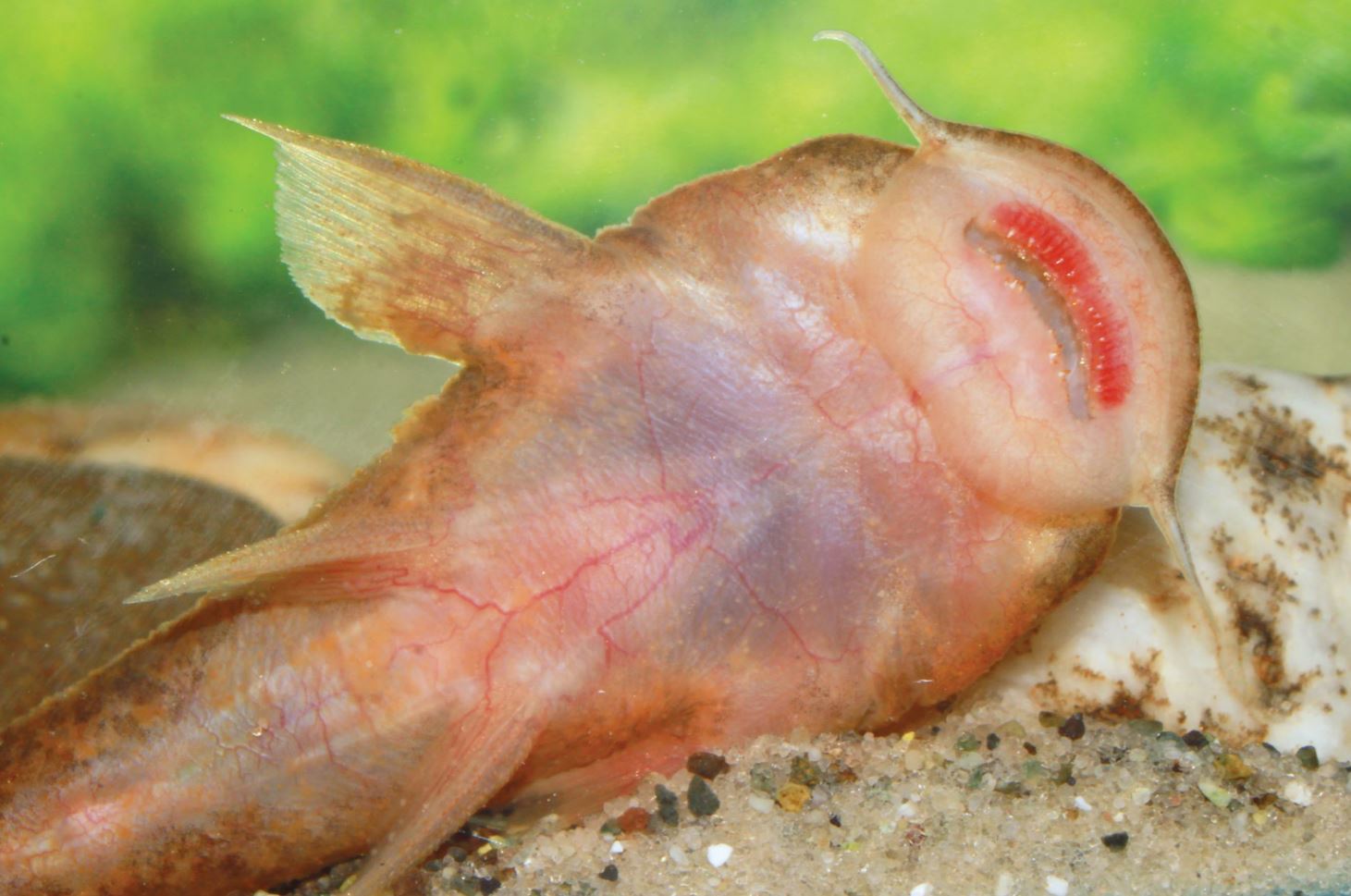 The mouth and tooth structure of Astroblepus taczanowskii is reminiscent of Ancistrus species.

Maintenance in the aquarium

These fascinating catfishes should be kept cool (18-22°C) and with a strong current in the aquarium. Otherwise their maintenance is similar to that of Ancistrus. The imported specimens have so far proved to be very peaceful among themselves. Unfortunately they are really susceptible to White Spot (Ichthyophthirius), a problem also known from other scaleless fishes, for example the Clown Loach (Chromobotia macracanthus). Hence these catfishes should be observed carefully during acclimatization so as to be able to react promptly at the first signs of the disease.