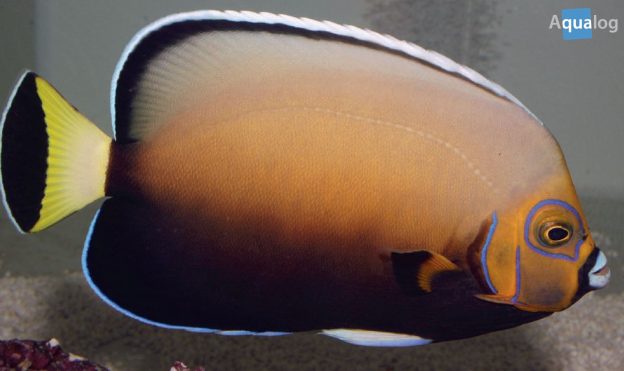 Many fish enthusiasts regard coral reefs as the epitome of species diversity
among the fishes. That is not quite correct. In reality there are “only” around
2,000 species of true coral fishes, while to date around 32,000 fish species are
known in total, about half of which live in the sea. Of the 2,000 coral-fish species only some 200 are regular in the trade, and the rest are regarded as rarities. We would like to introduce you to some of these rarities here.

The majority of these rarities are not, however, rare In the wild in the sense that there aren’t many of them. Fundamentally that sort of thing doesn’t occur in the case of small fish species that live in the sea, as some are eaten every day and the population must ultimately compensate. For this reason collecting for the aquarium poses no serious threat to wild populations.

Chaetodontoplus conspicillatus
This angelfish comes from way outside the regions where ornamental fish collectors are normally active: it was described from the Lord Howe Islands, and its distribution extends from there to New Caledonia and the Great Barrier Reef off Australia. Collecting ornamental fishes is strictly regulated there, and so invariably only a few specimens make their way into the trade, and, naturally, they are correspondingly expensive. The common name Conspicuous Angelfish appears to be based on the misinterpretation of conspicillatus, which does not mean conspicuous but is actually a made-up Latin word meaning “spectacled” (spectacles hadn’t been invented in Roman times). It is used as the specific epithet for a variety of creatures with a ring around the eye, and as Spectacled Angelfish is far more appropriate, we will use the name here. The Spectacled Angelfish grows to around 20-25 cm long and hence is one of the medium-sized angelfishes. It usually presents few problems as regards accepting food, and one must always reckon it attacking invertebrates in the reef aquarium. 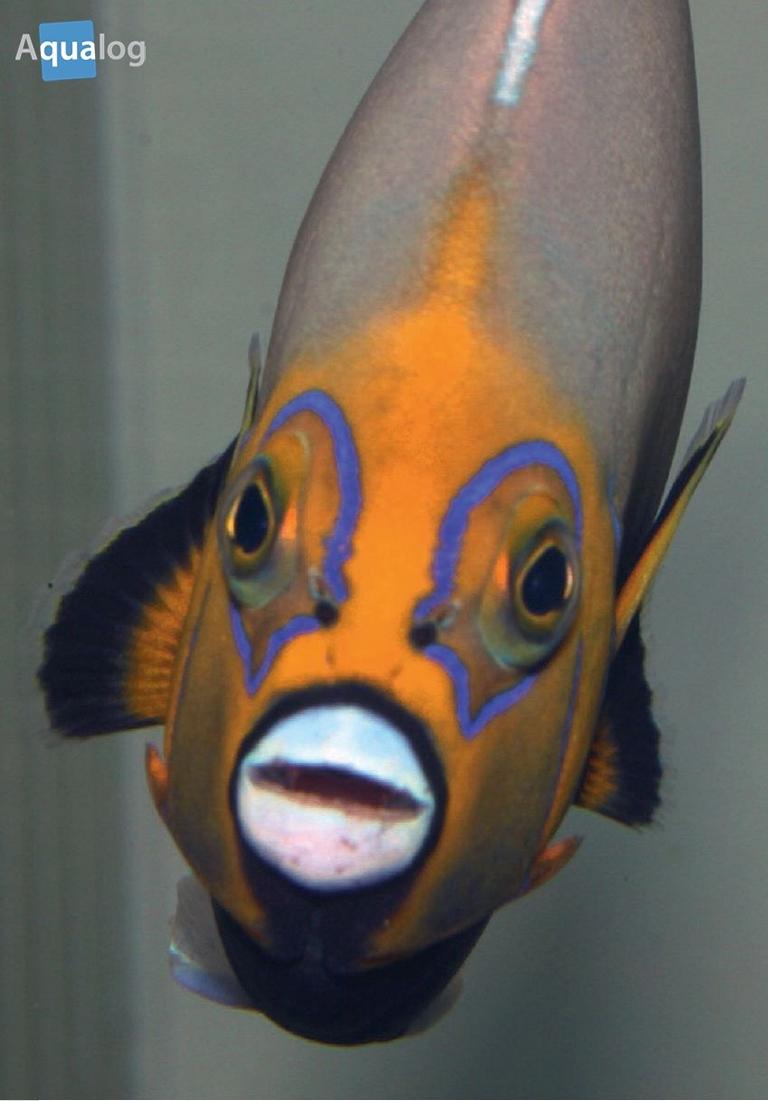 Holacanthus clarionensis
Much of what has been said about the Spectacled Angelfish applies equally to the Clarion Angelfish, Holacanthus clarionensis: it has a restricted, out-of-the-way distribution (eastern Central Pacific: southern tip of Baja California, Mexico; plus Clarion and the Revillagigedo group on the west coast of Mexico, and Clipperton Island) and hence reaches us only very rarely and in small numbers. It is important that if possible the temperature in the aquarium shouldn’t exceed 22 °C in the long term, as this species comes from the subtropics! Maximum length is around 20 cm. 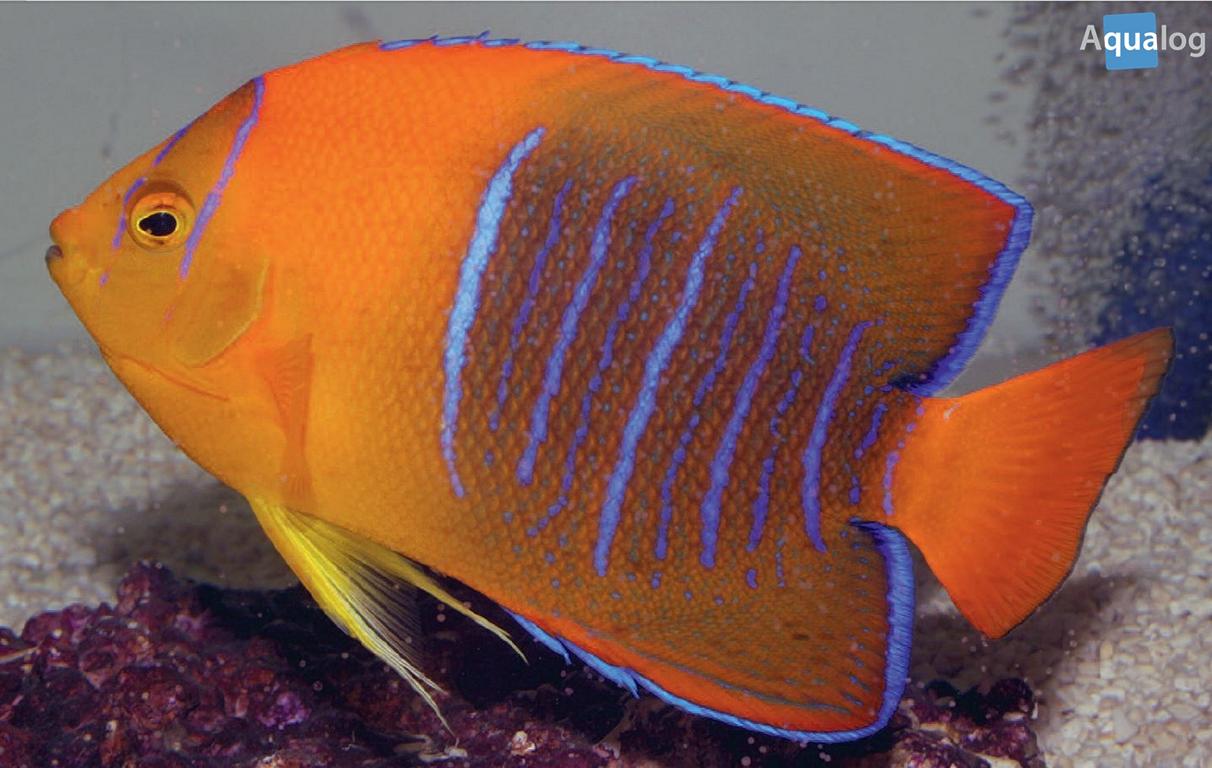 Centropyge interrupta and Centropyge hybrids
Pygmy angelfishes are ideal aquarium fishes that often spawn in the aquarium. Unlike the large angelfishes they generally leave corals alone, as they are adapted to feed on plankton. The Japanese Pygmy Angelfish, Centropyge interrupta, comes from Japan and the northwestern Hawaiian Islands. The species grows rather large for a “pygmy” angelfish, specifically 15 cm. Large individuals are always males. This species likes cooler conditions too. Just as sensational are the various hybrids shown here. All these fishes originate from de Jong Marinelife in Holland. The chances of a young pygmy angelfish surviving in the wild are infinitely small. In addition hybrid matings take place only very rarely. So it is quite astonishing that any of these fishes reach adulthood at all. Anyone maintaining such a fish can be pretty sure that they have something unique in their aquarium. 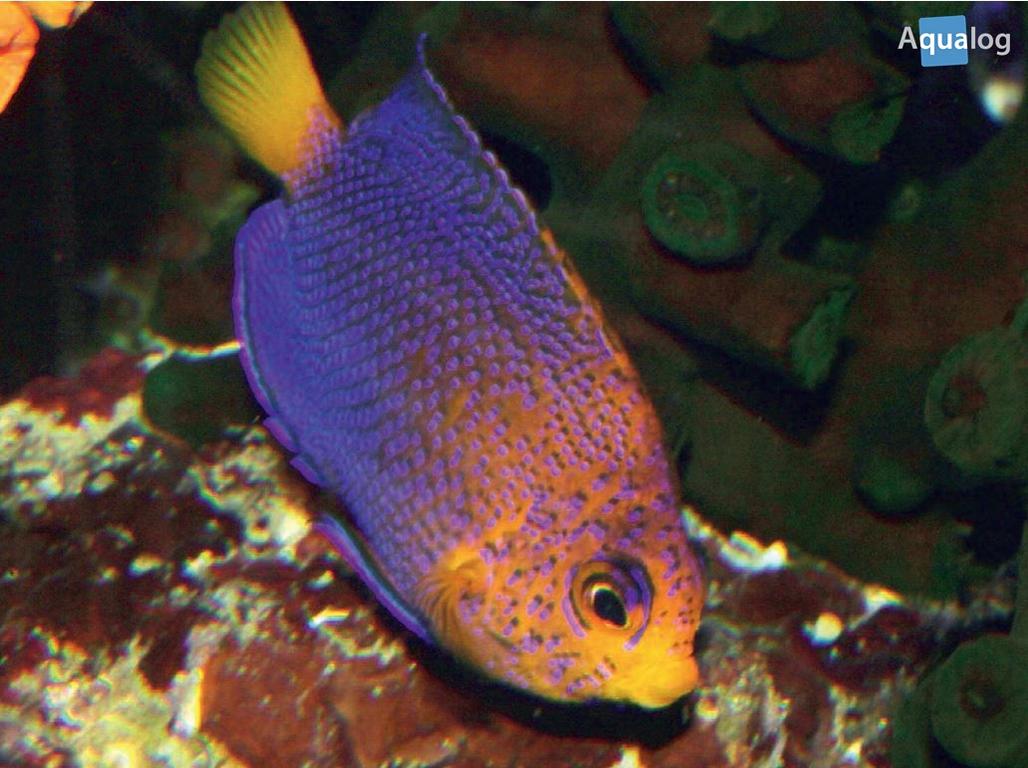 Anampses femininus
This gorgeous wrasse, which can grow to around 25 cm long, occurs from Australia and New Caledonia to Easter Island. Here too the larger individuals are always males, and, like the pygmy angelfishes, wrasses almost always undergo a sex change from female to male. 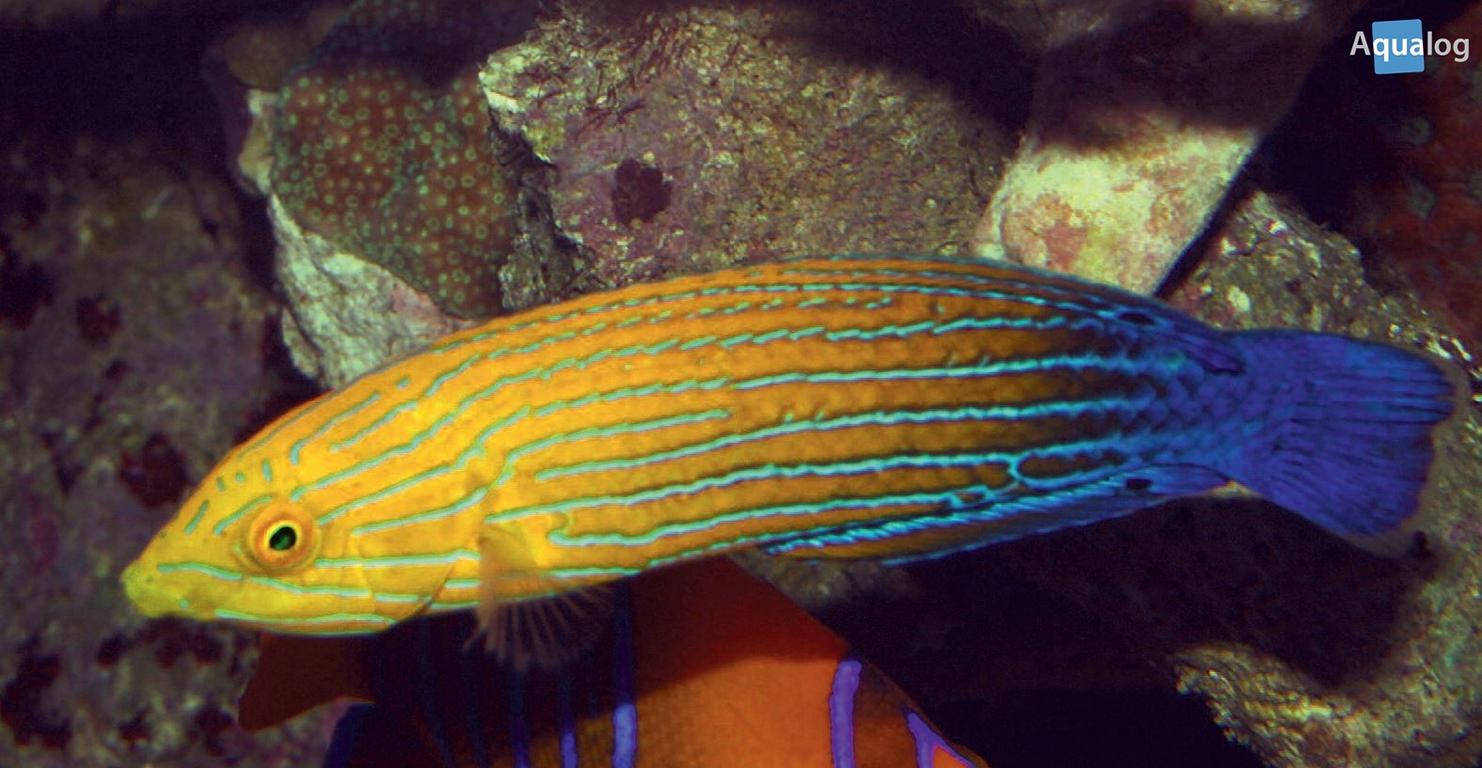 Cirrhilabrus lineatus
This splendid dwarf wrasse grows to approximately 12 cm long. Its distribution is almost identical to that of the Spectacled Angelfish. 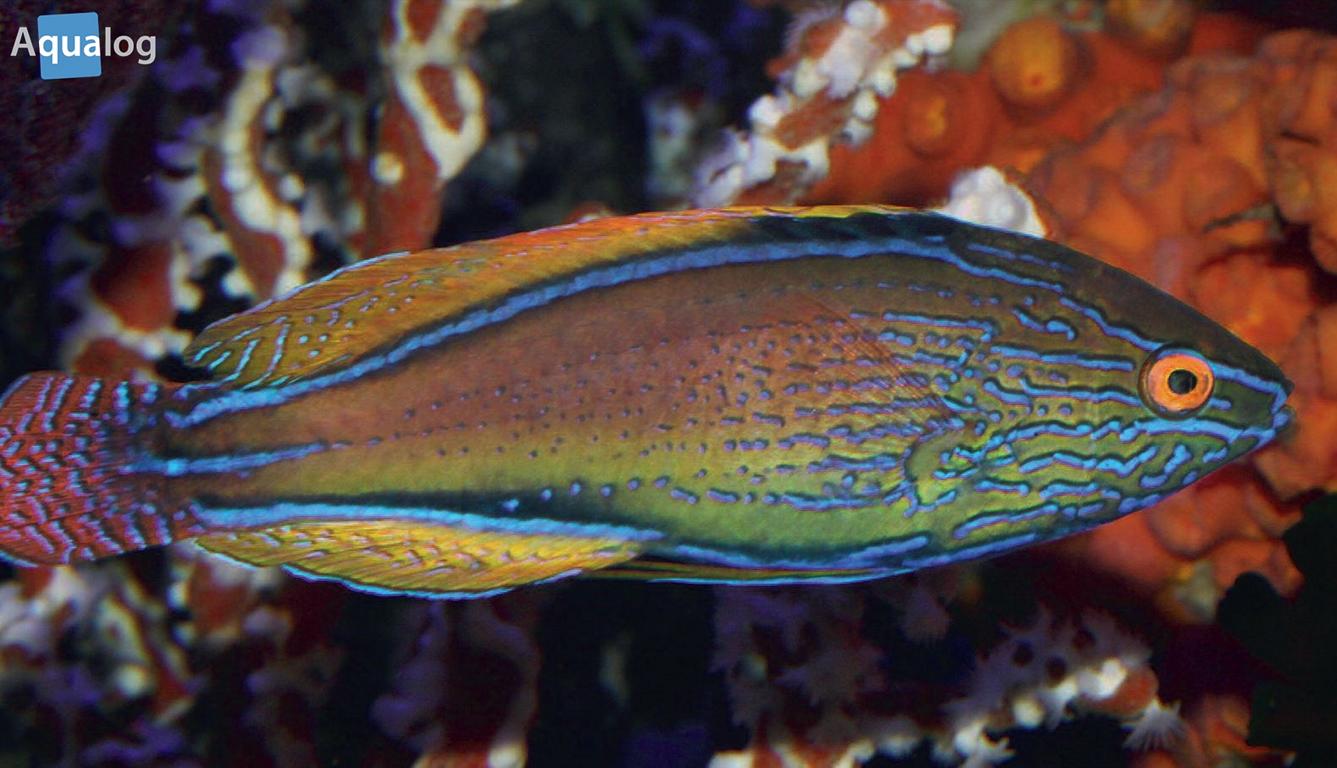 Macropharyngodon choati
This Australian wrasse remains even smaller: these little fishes grow to only around 8 cm long. It is important for all wrasses that there should be at least a small area of sandy bottom available for them to bury themselves in at night. 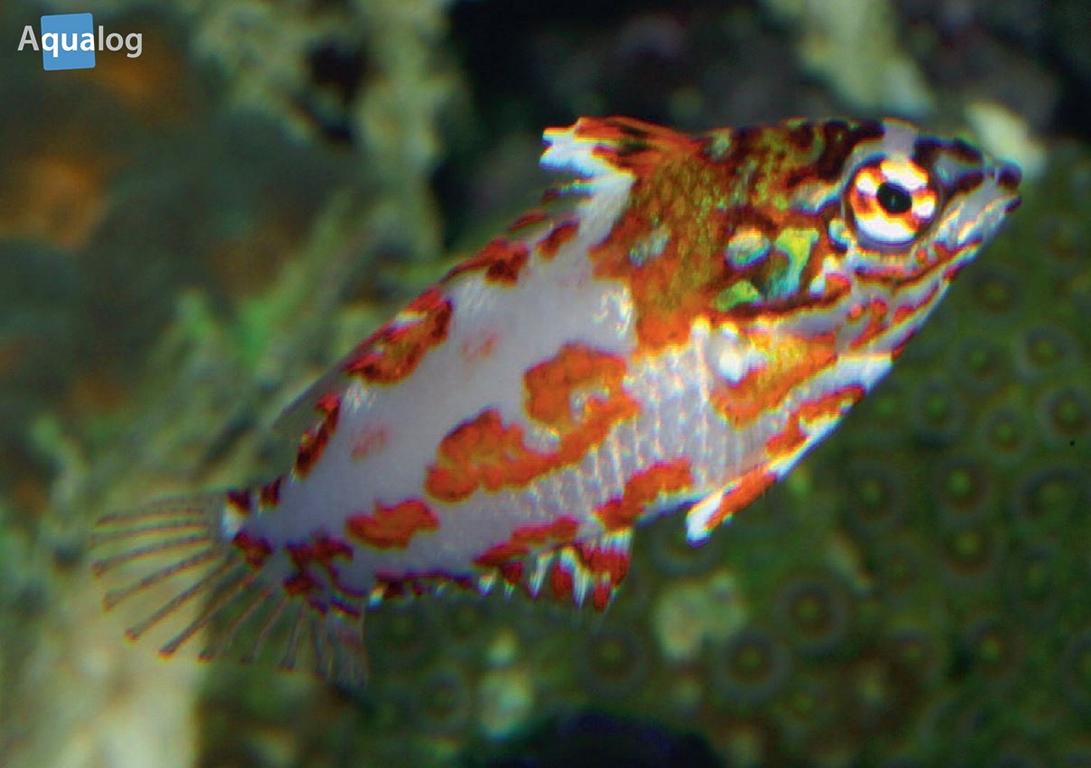 Pseudanthias calloura and Pseudanthias aurulentus
The basslets are close relatives of the much larger groupers, and like the latter they begin their lives as females. Once they reach a certain age they transform into males, which in the case of the basslets are very attractive in appearance. One of the loveliest of all the species is the rareP. calloura. Unfortunately the male in the photo isn’t in courtship dress, as then they are quite breathtakingly beautiful. P. calloura grows to around 10 cm long and occurs only at Palau.

Pseudanthias aurulentuscomes from Australia and grows to only 5-6 cm long. A gorgeous little creature, but very timid, at least initially, and a real challenge for the photographer. All basslets should be fed 5-6 times daily and the diet should be as varied as possible.