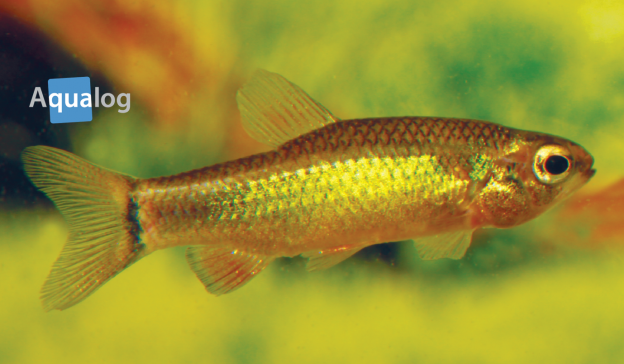 Aquarium Glaser received a number of sample specimens from the Congo. The exporter requested identification and asked whether these fishes were of any interest for the aquarium trade.

The first species was relatively easy to identify:

Neolebias ansorgii
This dainty little characin was a fairly popular aquarium fish in the 1950s and 1960s – according to the literature, at least. Nowadays it is only very rarely seen in the trade. It isn’t a very productive breeder, so the small numbers of offspring are normally bought directly from the breeder. The species is comparatively widespread in Central Africa. It has been reported from Angola, Benin, Nigeria, Cameroon, Gabon, and the D. R. Congo However, it would appear that this little fish (around 2.5 – 3 cm long) is commonly overlooked or prefers habitats where it can’t be collected effectively. Otherwise it is difficult to explain why the species so rarely turns up in the trade. 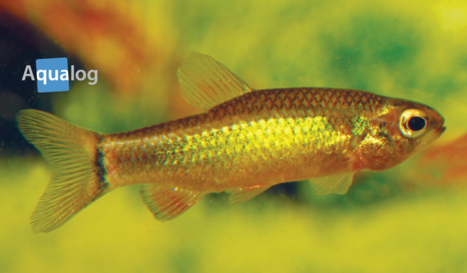 There is also a question mark over whether all fishes determined as Neolebias ansorgii actually belong to this species. Depending on the locality, these fishes look very different and it has yet to be clarified what the fish described by Boulenger in 1912, from the Lucula River in Angola, actually looks like in life. The variant or species recently sent as a sample of five specimens exhibits a very attractive, brilliant green lateral stripe. The five specimens have gone to a trusted breeder, but at present it looks as if all of them are males. These dwarfs, which aren’t particularly delicate, are best maintained in a small species tank. In the company of larger and livelier fishes they become timid and pale, as also happens in brightly lit aquaria. So, muted light, dark substrate (peat fiber), soft water, pH 6.0-6.5, and a temperature around 24 °C. You should then get a lot of pleasure from these charming little fishes, which will eat all the usual fish foods of appropriate size.

The second species is one of the few freshwater gobies found in Africa:

Awaous lateristriga
This goby grows to around 25 cm long, and is thus one of the larger species. It is very widely distributed in West Africa and also found on numerous islands. When adult these fishes live almost exclusively in fresh water, and are only occasionally reported from brackish regions as well. The wide distribution and the occurrence on islands can be explained by the fact that the tiny larvae of the species develop in the sea and drift long distances with the marine currents. This specialized reproductive biology makes breeding in the aquarium very difficult, as we lack suitable food organisms with which to feed the larvae during their marine phase. Even so, reports of successful breeding are published occasionally.
The following data relate to the related species A. flavus from South America, which is so attractive that aquarists have already attempted to breed it. These gobies are cave-spawners, and the very underdeveloped larvae hatch after only around 12-13 hours. At this time their eyes are hardly developed at all and they float through the water in a typical head-down position. After four to five days they assume a horizontal swimming position, the eyes are now fully developed, and the little fishes can begin to take food. At this point they must without fail be transferred to full-strength sea water, as otherwise they will inevitably die. Maintenance of the larvae is possible at a salinity of 1.018 upwards. The larvae can be transferred straight from fresh to sea water without fear of them being harmed. 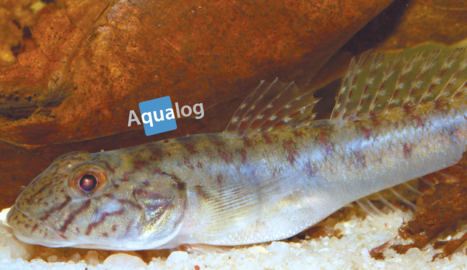 The maintenance of the larvae in sea water should continue for up to 20 days. During this period the larvae grew and apparently took food, though it wasn’t entirely clear exactly what they are eating. They were given rotifers (Brachionus); cultures for  breeding such rotifers can be obtained from specialist aquarium dealers. The rotifers were fed on micro-algae in the rearing aquarium. Hence it is conceivable that the goby larvae also consumed the algae or unidentified ciliates that developed. For further details see the very interesting report by Naomi Delventhal at http://gobiidae.com/breeding_awaous.htm . But even if you don’t breed them, these fishes are very interesting to maintain in the aquarium as, like all gobies, they exhibit a wide spectrum of behavior. When maintaining them it is important to provide a substrate of fine sand, which the fishes will sift with great enthusiasm for food particles. Water parameters are of subordinate importance, though the temperature should be in the 22-26 °C range. These fishes have large appetites and will take all the usual foods. A. lateristriga are peaceful among themselves and towards other fish species. The final sample species was a splendid dwarf cichlid:

This gorgeous species has been known in the hobby for some time. It was initially named Nanochromis sp. “Kasai” after the locality where it was found, until it was eventually described in 2006 by Lamboj and Schelly and given the scientifically valid name N.teugelsi. This dwarf cichlid was first discovered in the year 2000 and exported as an ornamental fish. The one to three black dots in the softrayed part of the dorsal fin, visible in the majority of individuals, are very characteristic of the species. Males grow up to 8 cm long, females remain significantly smaller. Like all Nanochromis species this is a biparental cave brooder, with the females mainly guarding the eggs and fry and the males chiefly defending the territory. Soft, acid water with a low germ count is required for both maintenance and breeding. 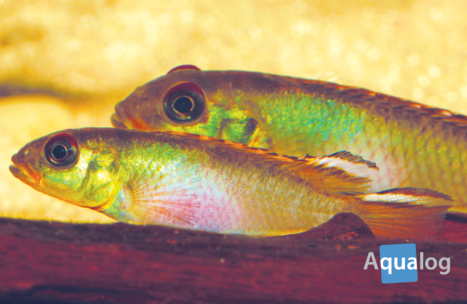