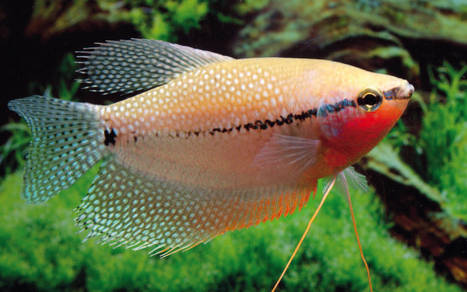 The first importation of the Pearl Gourami to Germany took place in 1933. Since then this gorgeous fish has never disappeared from the aquarium hobby. Are aquarists guilty of contributing to its extinction?

The Pearl Gourami is one of four species of the genus Trichogaster (termed Trichopodus by some people). Like the other three species, the Three-Spot Gourami (T. trichopterus), the Snakeskin Gourami (T. pectoralis), and the Moonlight Gourami (T. microlepis), this up to 12 centimeters long species is regarded as a food fish in its homeland. In places where the Pearl Gourami (T. leerii) occurs it is common and not endangered. Nevertheless the species figures on the IUCN Red List as being at the warning stage of ”Near Threatened”. Why?

Oil Palms – the curse of the tropics

The Pearl Gourami was formerly found in Thailand, on the Malayan Peninsula, on Sumatra, Borneo, and Riau, and perhaps also on other smaller islands in the Sunda group. Here there were numerous peat swamps, and hence abundant blackwater biotopes. But nowadays there are endless Oil Palm plantations where once there were blackwater swamps, and any search for blackwater there is in vain. The fishes that require black water are gone. In 1945 Hugh M. Smith wrote in his book on the freshwater fishes of Thailand that the Pearl Gourami was not uncommon in the vicinity of Bangkok. Horst Linke, the experienced tropical explorer and labyrinthfish specialist, has never been able to find the species in Thailand, and according to the IUCN List it must be regarded as extinct in central Thailand. And habitat loss in the coming 10-20 years is estimated at a dramatic 30%.

Wild-caught Pearl Gourami practically never turn up in the trade. Wild-caught T. leerii have never been offered for sale by Aquarium Glaser, one of the largest ornamental fish wholesalers in the world, in the last 15 years. The species is bred commercially in South-East Asia (Indonesia, Singapore, Malaysia, Thailand, Sri Lanka, Vietnam, Hong Kong), as well as in Israel, the Czech Republic, and the USA. Everywhere that the aquarium hobby is practiced there are hobbyists busy breeding the species as well. The national and international trade in this extremely productive species – it is a bubblenest builder that produces around 700 eggs per clutch, breeds year-round, and produces a new generation every 4 – 6 months – is completely independent of collections from the wild. So over-fishing for the live trade can be unequivocally excluded as a reason for the decline in wild populations.

Thanks to the aquarium hobby the Pearl Gourami isn’t endangered as a species. But the wild populations are seriously threatened. Yunedi Basri of the Integrated Fishery Laboratory at Bung Hatta University in Padang, West Sumatra, has begun conservation breeding of the population from Riau (Jakarta Post, 6th August 2013). There are no longer any Pearl Gouramis to be found in West Sumatra itself. It is very important to keep the various genetically different populations of T. leerii pure. For this reason the natural populations need to be recorded and imported as quickly as possible. Breeding itself is no problem, as it belongs to the basic exercises in the aquarium hobby.