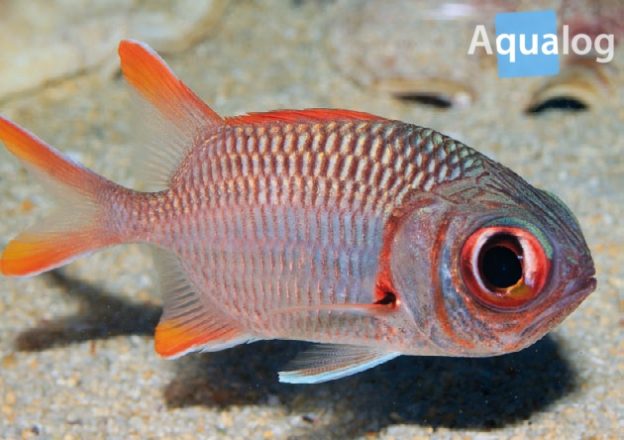 Anyone seeing a soldierfish of the genus Myripristis for the first time will probably immediately think “mooncalf”. The huge eyes and short snout look very odd. But these fishes are anything but mis-shapen. They have inhabited the seas very successfully for millions of years and are among the most ancient of fishes that exist today.

Whence the popular names?
When, around 250 years ago, the study of the tropical fish fauna began, the sometimes splendid, but always striking coloration of soldierfishes reminded scientists of the military uniforms of the 18th century. Because soldierfishes are predominantly red in color and the coats of the infantry back then were likewise often red (a practical color, as blood spots don’t show up on it all that much) they arrived at the name soldierfishes. In Germany the squirrelfishes are known as hussarfishes, again because their striped coloration reminded the early ichthyologists of the braided jackets of the hussars (lightly armed cavalry). The English name squirrelfishes relates to the fact that there are large numbers of striped squirrel species in North America. 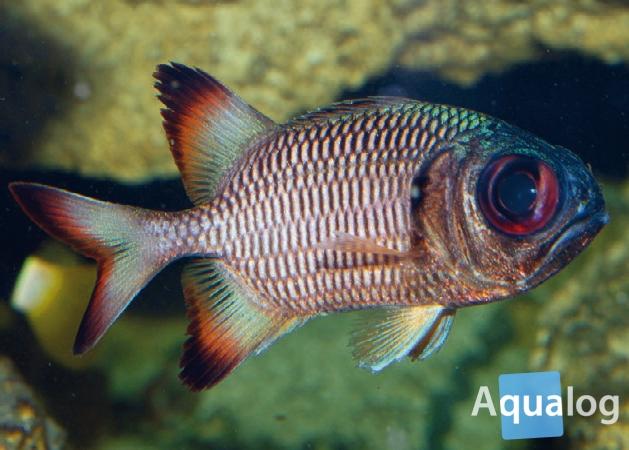 Peaceful fellows
Despite their saber-rattling popular name, all soldierfishes (and squirrelfishes) are very peaceful fellows and that, along with their attractive colors and unusual shapes, makes them generally desirable as aquarium fishes.

Soldierfishes will never attack other fishes or even behave badly towards their owner. But some circumspection is nevertheless required when dealing with them, as all Holocentridae have numerous sharp spines on their bodies and fins, and the squirrelfishes also have a long spine on the lower edge of the operculum. This spine even secretes a poison in some species (recorded in Sargocentron). But nobody has ever died as a result, although “stings” are described as very, very painful. However people with allergies should be particularly careful when dealing with these fishes. Bathing the injured part of the body in very hot water (as hot as is bearable) usually brings quick relief, as the poisons in question are very temperature-sensitive protein compounds. 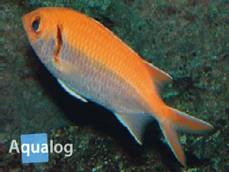 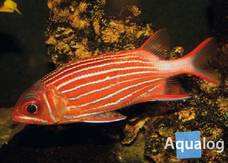 Deep-sea fishes?
No, the majority of all soldier- and squirrelfishes occur in relatively shallow water down to around 30 meters of depth. Only a very few species go really deep. Soldier- and squirrelfishes are even regarded as notable coral fishes and are found mainly on coral reefs. Nevertheless the large eyes may be the result of soldier- and squirrelfishes originally evolving in the deep. This is supported by, inter alia, the fact that to the present day close relatives of the Holocentridae inhabit the deep sea and also live to a great age there: the Deep-Sea Perch (Hoplostethus atlanticus), which has a worldwide distribution and is used commercially as a food fish, is said to live for up to 160 years. In addition other close relatives of the Holocentridae have evolved light organs, which are otherwise known only from deep-sea fishes. These so-called flashlight fishes (Anomalopidae) have light organs beneath their eyes, which they can uncover and illuminate. They then shine so brightly that divers can supposedly read in their light……

Nocturnal shoalers
The large eyes are also a survival from the deep-sea past, but are used by the species that exist today in order to go hunting at night. Soldier- and squirrelfishes spend the day in caves and beneath overhangs, often accompanied by cardinalfishes (Apogonidae), bigeyes (Priacanthidae), and other crepuscular species. It is very common to find several species of soldier- and squirrelfishes there together. One of the peculiarities of these fishes is that they don’t always swim ”normally”, but also very often do so belly-up. 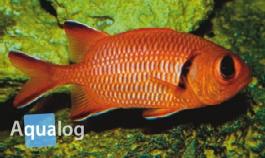 Little predators
Soldier- and squirrelfishes feed exclusively on meaty foods, with squirrelfishes preferring bottom-dwelling crustaceans while soldierfishes instead take larger planktonic organisms (small fishes, shrimps, cuttlefishes, etc) from the open water. But in the aquarium they adjust very quickly to the usual deep-frozen foods and are genuinely problem-free to feed. They will even take food sticks from the water’s surface within a short time of settling in.

The vast majority of soldier- and squirrelfishes remain fairly small and grow no longer than 20 cm. But because they are very common they are caught and eaten everywhere. The largest of all the soldierfish species is Myripristis adusta, which attains a maximum length of 32 cm, but usually grows to only 25 cm long in the wild; all the other soldierfish species remain smaller. The largest squirrelfish species is Sargocentron spiniferum with a maximum length of 45 cm, but which usually attains only 35 cm long. Here too the remaining species usually grow to around 20 cm long. 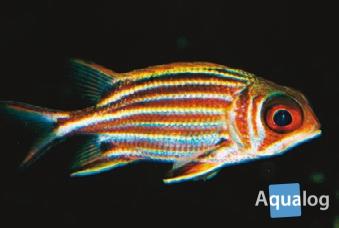 Unspectacular breeding
Just like the overwhelming majority of marine fishes, the soldier- and squirrelfishes employ the “quantity rather than quality” approach when it comes to breeding. Brood care isn’t practiced in any shape or form, but the eggs are simply released in large quantities into the open water, where they are abandoned to their own devices. No visible external sexual differences have been described to date, and details of courtship behavior are likewise unknown. There is considerable scope for research-oriented aquarists here, because, as can be seen from the photos, numerous species of soldier- and squirrelfishes look extraordinarily similar. And because three or four species often occur together in the wild, there must be some sort of mechanism that prevents hybridization. Hybrids between soldier- or squirrelfishes have not been mentioned to date in the literature, so if they exist they are at least rare. The barriers to crossing are probably to be found in the courtship behavior, but for obvious reasons that is difficult or impossible to study in the wild (bearing in mind the nocturnal activity). Soldierfishes (Myripristis murdjan) spawned in the aquarium as long ago as the 1960s, so in this respect they are generally cooperative fishes (de Graaf, 1970). 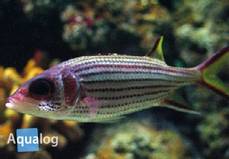 In the aquarium
Soldier- and squirrelfishes are exceptionally well suited to maintenance in the aquarium. Being plankton feeders, they leave sessile invertebrates completely alone and other fishes have nothing to fear from them as long as they aren’t regarded not as food.

In my aquarium containing two large, easily 20 cm long, Myripristis I observed that even small fishes were pursued for only a few days. Once they had survived this period and become familiar with their surroundings, the soldierfishes no longer represented any threat to them. The soldierfishes then made only half-hearted attacks that the small fishes were easily able to avoid. 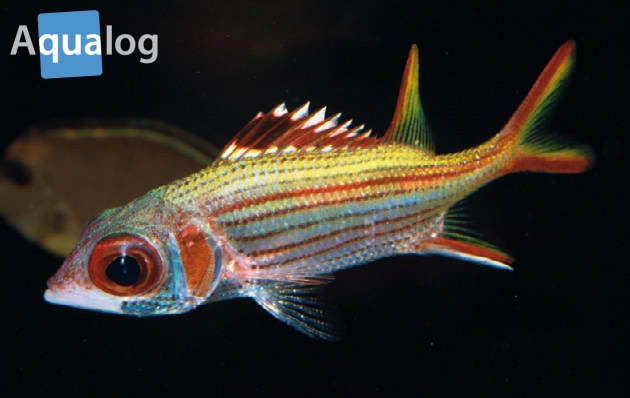 Unlike in the wild, soldier- and squirrelfishes aren’t crepuscular or nocturnal at all in the aquarium, but after a short settling-in period are out and about all day. But a large cave or similar should nevertheless be available to these fishes, if only so that you can observe the interesting belly-up swimming behavior from time to time.

Even though soldier- and squirrelfishes aren’t noted as shoaling fishes, they should be kept in a small group, or at least in twos. A group can generally consist of different species. 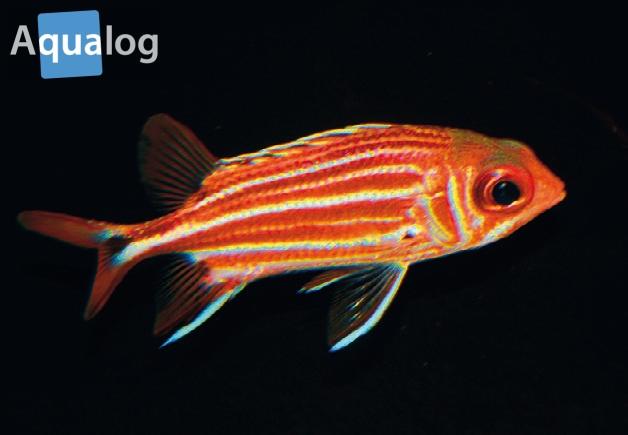 Unfortunately soldier- and squirrelfishes are only very sporadically available in the aquarium trade. But if the opportunity offers, anyone with a large aquarium should seize it without worries – it will certainly be worth it! 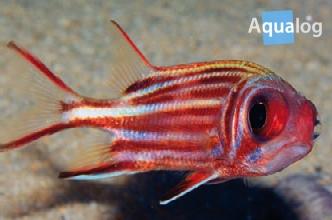