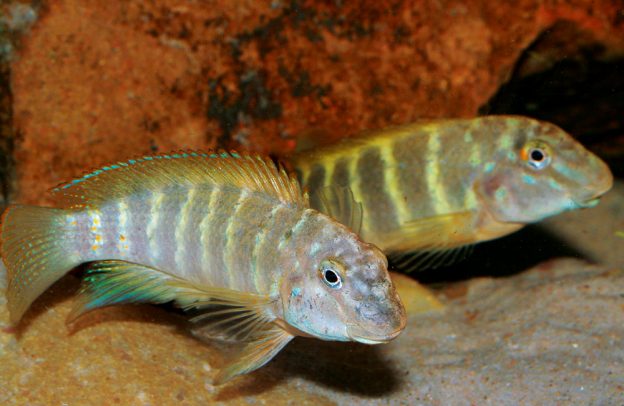 Lake Tanganyika in the heart of Africa is a vast aquarium. The fish-enthusiast visitor will  encounter the first cichlids in the surf and in the barely ankle-deep water of the shore zone, which – at least in the southern part of the lake, ie in Zambia – appears to be populated by sparkling jewels. These are the little cichlids known as Tanganyika Clowns.

There are four or five species of
Tanganyika Clowns, divided into three genera. They all look extraordinarily similar and are without doubt very closely related to one another. The division into different genera depends on the very different form of the teeth. Such characters were formerly considered of great significance when evaluating phylogeny. Nowadays this is no longer the case. It is, in fact, just a matter of time before some scientist examines these charming little fishes and puts all the species together in one genus. But that hasn’t yet come to pass. 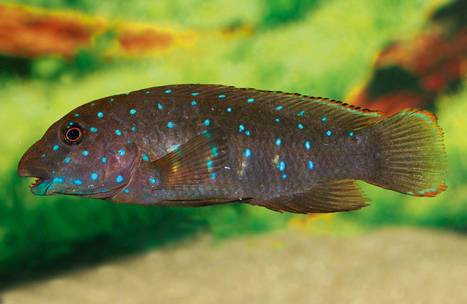 First genus: Eretmodus
This genus was erected by BOULENGER back in 1898. It is officially monotypic to the present day, with only the single species E. cyanostictus, likewise described in 1898 and assigned to this genus. But were the Tanganyika Clowns to be assigned to a single genus as mentioned in the introduction, they would be called Eretmodus. The type specimens of E. cyanostictus originated from the south of the lake, where these fishes always exhibit the blue spots that gave them their name. The situation is somewhat different in the north of the lake. Here there are populations that have only a few spots or none at all, and whose mouths are in addition always noticeably more subterminal, ie situated further beneath the head, than in their southern cousins. For this reason Ad KONINGS, who has an excellent knowledge of the cichlids of the great Rift Lakes, believes that the northern Eretmodus are an as yet undescribed species that isn’t identical with E. cyanostictus – a view with which TAWIL (2005) also concurs. 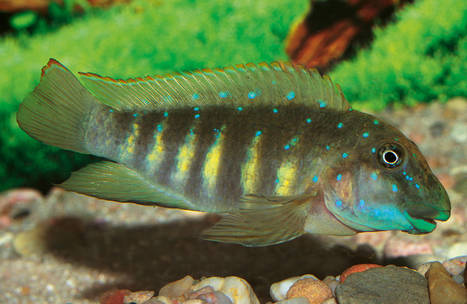 Second genus: Spathodus
Only a year after Eretmodus, BOULENGER also described Spathodus, whose type species, S. erythrodon, looks so similar to Eretmodus cyanostictus that they can be told apart for certain only on the basis of their teeth. In Spathodus these are long and cylindrical, but broad and spatulate in Eretmodus. However, the S. erythrodon
pictured by TAWIL (2005) has none of the vertical bars so typical of Eretmodus. By contrast the second species of the genus, S. marlieri, looks quite different. In some respects it deviates from the other Tanganyika Clowns, both in its brood care and in its relatively marked sexual dimorphism, which will be discussed in more detail later. 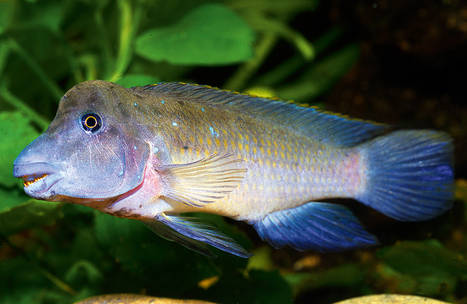 Third genus: Tanganicodus
This genus was erected in 1950 by POLL, and is monotypic with the single species T.irsacae. Once again it is tooth structure – inthis case long and pointed – that separates the genus from Eretmodus and Spathodus. There is, however, one color character that makes it relatively easy to distinguish this species, to date known only from the north of the lake, from the other Tanganyika Clowns: in Tanganicodus there is always a striking spot in the middle of the dorsal fin. TAWIL (2005) regards the differences seen in the Tanganicodus from Kavalla (D. R. Congo) 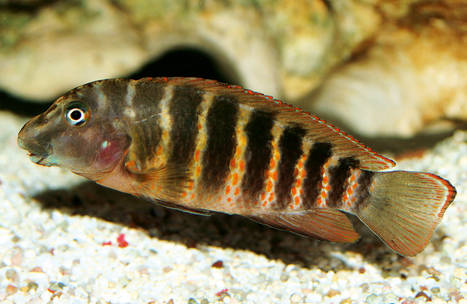 Dwarf cichlids
All the species of Tanganyika Clowns remain below the 10-cm mark, and only male Spathodus marlieri approach it. Essentially, the males of all species are somewhat larger than the females. In many color forms that is the only way to tell the sexes apart. Eretmodus grow to around 8,females only 6 cm long; the same applies to Spathodus erythrodon, S. marlieri attains 10 / 8 cm long, and Tanganicodus is the smallest of all the Tanganyika Clowns with a maximum of 6.5 / 5.5 cm. 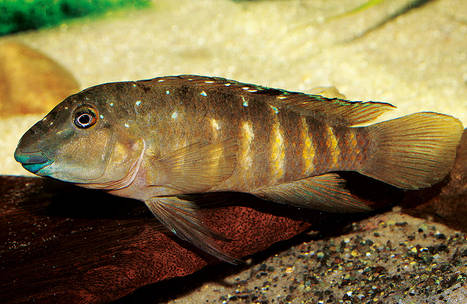 Shore-hoppers
As has already been mentioned at the beginning, Tanganyika Clowns are marked shallow-water-dwellers. But Lake Tanganyika nothing like an artificial lake in European latitudes. By contrast it is a vast freshwater inland sea with waves to match. Even in calm weather there is always a slight swell, but during storms meter-high waves may develop. Tanganyika Clowns find their food – Aufwuchs – among the rocks of the shore region. This biocover includes algae and all the small and microscopic organisms living in it. At the same time each species of Tanganyika Clown is somewhat differently specialized to its close relatives by virtue of its special tooth form. Thus up to three species of Clowns may occur together without being in direct competition with one another. In all Clowns the swimbladder is reduced, as too much buoyancy would do more harm than good in their biotope. The resulting hopping mode of swimming, comical to human eyes, together with their broad lips, often colored a striking blue, has led to their popular name. But this shouldn’t disguise the fact that all Clowns are exceptionally territorial fishes that can be very aggressive, especially towards conspecifics. In particular, males of Spathodus marlieri can develop into real tyrants in the aquarium. Hence, despite their small size, the aquarium for Tanganyika Clowns should not be too small and provide copious hiding-places. 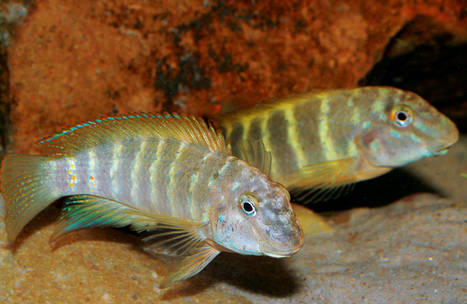 Biparental mouthbrooders
In addition to their attractive appearance, it is above all their very special form of brood care that makes Tanganyika Clowns so appealing to aquarists. Specifically, they are biparental mouthbrooders with a permanent pair bond. The word biparental signifies that both parents take part in the brood care. This is extremely unusual in mouthbrooding cichlids from the African Rift Lakes. Normally they are non-pairing maternal mouthbrooders. This means that after spawning males have no pair bond with females, who look after the eggs and sometimes the brood alone. The spawning behavior of Tanganyika Clowns will be illustrated here using Eretmodus as an example. It begins with the female using her mouth to clean the spawning substrate – as a rule a horizontal piece of rock, in the absence of which the bottom glass is often cleared of substrate.The male swims to the pre-cleaned site, apparently deposits sperm there, and then leaves again. With quivering movements the female then deposits one or more eggs in the same spot, turns around, and takes the eggs into her mouth. The male now swims back to the spawning site and releases sperm, which the female takes into her mouth with the eggs, where fertilization takes place. Only relatively few – around 30 – eggs are laid, but they are comparatively large. The individual spawning stages always follow the sequence described, ie cleaning by the female, sperm release by the male, collection of eggs, sperm release by the male. The female now performs the mouthbrooding for around 10-12 days, but constantly remains in the vicinity of the male. After this period she transfers the spawn to the male, who completes the mouthbrooding for a further 7-10 days.There is no ongoing brood care of the fry after release. All Tanganyika Clowns exhibit this behavior, with the exception of Spathodus marlieri, which practices exclusively maternal mouthbrooding (ie by the mother). 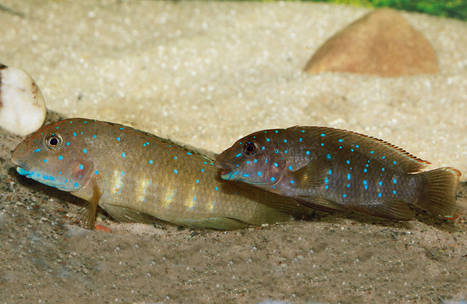 Sexual dimorphism
A major problem preventing the successful breeding of Tanganyika Clowns in the aquarium is that the sexes can be distinguished only with considerable difficulty, but on the other hand the high degree of intraspecific aggression doesn’t allow maintenance in a group. Essentially, females always remain smaller, so if possible you should select the largest and the smallest individual from a group. Plus pairs will often already be swimming together in the dealer’s tank and you can work out who goes with whom by watching. But color differences can be seen in some populations; thus the females of many Eretmodus populations are darker colored than the males. In some populations of E. sp.“Cyanostictus North” the females have less blue on the head. In the population of Tanganicodus irsacae from Ikola the females have a broader colored margin to the caudal fin. And in Spathodus marlieri males develop a nuchal hump. Astonishingly juvenile Eretmodus are sometimes sexually dichromatic, with  males dark and females light in color. All in all, Tanganyika Clowns are gorgeous, easy-to-keep fishes, whose successful breeding in the aquarium nevertheless still represents a challenge.