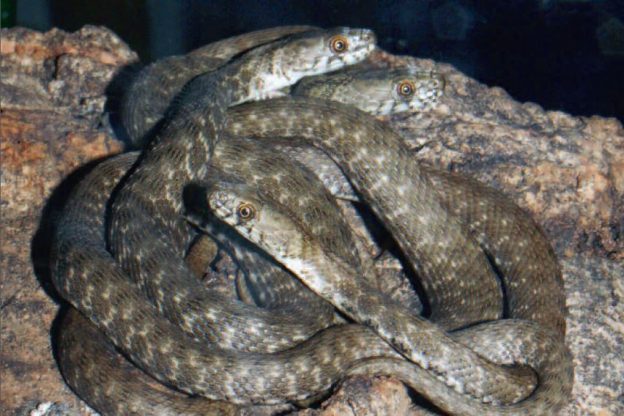 Do you know how many snake species are native to Germany? Correct, there are five species, four non-venomous and one venomous. Three of these species are relatively common: the Grass Snake, the Smooth Snake, and the European Adder. Another species, the Aesculapian Snake, formerly rare, has spread recently thanks to global warming. But the rarest of our native snakes, the Dice Snake (Natrix tessellata), is extremely rare and endangered in Germany.

Before we look at the actual subject matter of the article, a few brief words on the other snake species. The Grass Snake (Natrix natrix), which occurs in two subspecies in Germany, likes to live in damp areas and prefers to feed on frogs. It also eats newts, fishes, and sometimes large earthworms as well. The Smooth Snake (Coronella austriaca) is an inhabitant of dry scrub. Its favorite food is lizards, but some populations also feed on nests of young mice or Slow-Worms. The Aesculapian Snake (Elaphe longissima or Zamenis longissimus) is a mouse-eater and likes warm woodlands, orchards, vineyards, etc. You will find a detailed article on this lovely snake in Aqualog News No. 100. Finally, the European Adder (Vipera berus), our only venomous snake, likes damp and relatively cool conditions. It is found further north than any other snake species. It feeds mainly on mice, but sometimes takes Common Lizards (Zootoca vivipara) as well.

The Dice Snake is widespread
All reptile and amphibian species are more or less endangered in Germany. The extremely dense population of our country by humans simply doesn’t leave enough habitat for the majority of species. Snakes have an even harder time of it than other species, as many people are afraid of them. Even though the days when snakes were killed are fortunately long past, they still don’t evoke any sympathy in the majority of people. If, however, we look at the overall distribution of the Dice Snake then it can be seen that this snake has an immense range! It occurs in Germany, Switzerland, Austria, Croatia (including some Adriatic islands), Slovenia, Bosnia and Herzegovina, Montenegro, Macedonia, Serbia, Italy, Czech Republic, Poland, Slovakia, Russia, Albania, Romania, Moldavia, Bulgaria, Hungary, Turkey, Greece (including Crete, Lesbos, Samos, Corfu, Kythira, Seriphos, Euboea, Tinos), Cyprus, Afghanistan, Ukraine, Armenia, Georgia, Azerbaijan, Kazakhstan, Turkmenistan, Tajikistan, Uzbekistan, Kyrgyzstan, Pakistan, Iran, Iraq, Syria, Jordan, Lebanon, Egypt, Israel, and northwest China. For this reason the species is classified only as ”least concern” (no reason to worry) on the worldwide Red List of endangered species. So why is it only in Germany that it is so rare?

A successful species pushing its boundaries
The fact is, the Dice Snake is a very successful species overall and constantly expanding its range. For climatic reasons in Germany it has reached the furthest outposts where it can survive. It has never been very common here and has always occurred only in areas that are particularly favorable climatically, all of which lie in what is now the federal state of Rhineland-Pfalz. Here there are still small populations in the Lahn and Mosel regions, while the majority of individuals live in the Nahe region; the species has probably been extinct in the Rhine area for more than a hundred years. It is particularly important for the future survival of the species in Germany that the comparatively limited populations (only a few hundred individuals in Lahn and Mosel, several hundred in Nahe) should not become isolated from one another with the result that no genetic exchange and/or migration between neighboring populations is possible any more. Were a major catastrophe (chemical accident, epidemic if a snake disease, unfavorable weather for several summers) to occur in one of the localities for the species, the result could be the extinction of the population concerned.

No manure + no tanning = no Dice Snakes
Historically, during the 1880s, Dice Snakes were captured and sold dead (as biological display material in alcohol) or alive (the price depending on size) in the pet trade for terrarium maintenance. That certainly won’t have done much good to the wild populations, small even back then, but things didn’t go really badly for the Dice Snake until ”modern” times.

As long ago as 1918-1923 the terrarium keepers of old were complaining about a massive decline in Dice Snake populations due to environmental destruction and campaigning for conservation measures. The dry stone walls near warm springs, formerly a perfect home for the snakes, were rendered. The tanning trade, which used so-called tanbark (chopped bark from oak and spruce trees, together with dead oak leaves) to tan leather, is practically nonexistent nowadays. The huge piles of tan-bark served Dice Snakes as an important place to lay their eggs, and they also hibernated there. Heaps of horse manure was a second, very important, egg-laying site for the Dice Snake. The warm, moist dung was a perfect incubator for the eggs. But nowadays nobody uses horses for transportation, everyone travels by car, and reptile eggs won’t develop in exhaust gases.

And finally, the land was cleared right to the banks of the rivers. The snakes, which leave the water to hibernate, now have to migrate across open land to their winter quarters (if the latter still exist), because the extensive areas of reeds that once bordered the rivers have been destroyed. The good news is that thanks to painstaking conservation measures, especially the creation of piles of horse manure in suitable spaces. Dice Snake populations in Germany are currently stable. 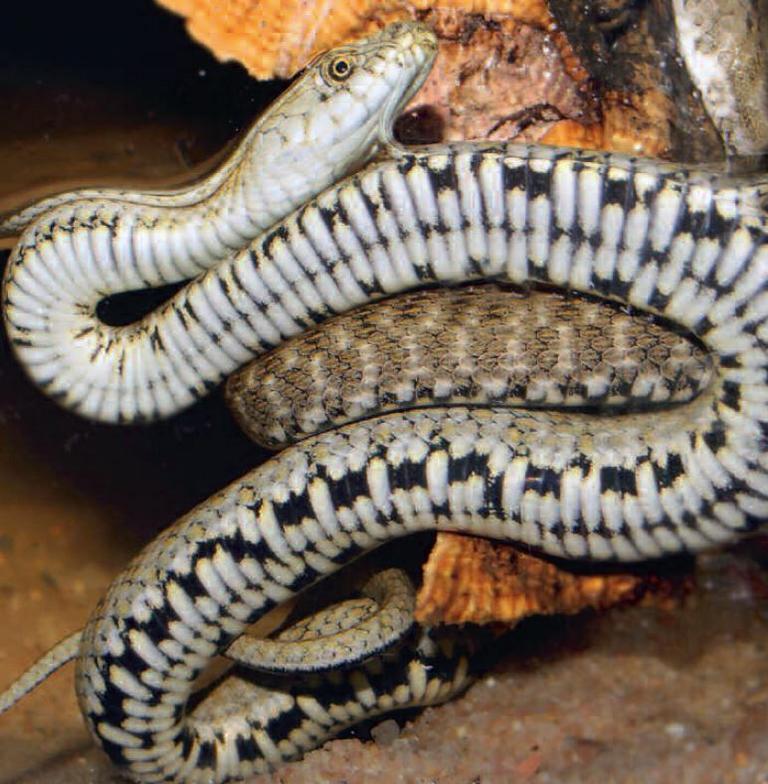 Dice Snakes in the terrarium
Obviously, under no circumstances should Dice Snakes be collected for the terrarium in Germany. That would be irresponsible, not to mention illegal. But because Dice Snakes are easy to breed, captive-bred specimens can be purchased cheaply. They can be recommended without hesitation as ideal aquatic snakes for the aqua terrarium. Dice Snakes grow to only 60-90 cm (extremely rare exceptions 130 cm) long, are non-venomous and rarely aggressive, and leave the water only to lay eggs, to hibernate, and to sun themselves. Dice Snakes prefer to hunt among large pebbles in the wild, and it is possible to set up a very attractive terrarium following Nature’s example, imitating a calm bay in the river bank with a bottom of large pebbles. In practice the land area can be relatively small, but an absolutely dry spot should always be available. When rearing youngsters it will suffice to have a floating island of thick cork bark as the land area. The lighting should be installed above the land area; the temperature should reach 35 °C in the warmest spot.

Heavily gravid females are best placed in another terrarium to lay eggs (see below). This corresponds to the situation in the wild, where females migrate to their egg laying sites. Any attempt to cobble together a land area offering the female optimal egg-laying conditions in the normal terrarium usually ends in disaster, as either the land area becomes a swamp or the water area becomes heavily polluted with earth, rotting plant material, etc. It is better to construct a land area in the form of a dry stone wall, as then nothing will go wrong and such a wall also looks nice.

Not just fish on Friday
Dice Snakes feed almost exclusively on fish, so obviously the ideal is to feed them on live food fishes of suitable size. This will keep their hunting instinct alive and simultaneously provide them with all the essential nutrients, vitamins, etc, they require. Obtaining live food fishes can be problematical, but luckily Dice Snakes will also take deep-frozen fish. Smelt (Osmerus eperlanus) are ideal, and are sold as animal food in the form of whole fishes, innards and all. Fish fillet should be used only in extremis. Snakes fed long-term on this food become ill. Dice Snakes should be fed 2-3 times per week.

Breeding
In the terrarium Dice Snakes usually mate a few weeks after coming out of hibernation. Because this snake species is completely peaceful, it can readily be kept in groups or pairs year-round. Once the females are heavily gravid and ready to lay, they should be transferred to a separate egg-laying terrarium.

Generally speaking, neither horse manure nor garden compost is sold for use as egg-laying substrate in the home terrarium, as both smell a bit. But houseplant potting compost will be fine (also available in Bio), with a depth of 15-20 cm being about right. The terrarium should be placed on a heating mat with the temperature set to 30 °C. The incubation period for the 5-25 eggs is around 40-45 days at 25-27 °C, and the newly-hatched young are some 23 cm long.

Hibernation
In Germany, where the climatic boundary of the species’ distribution is reached, Dice Snakes are often active only from the end of May to the end of September. The rest of the year is too cold for them. In other parts of their vast range, however, Dice Snakes are active year-round. Because the exact provenance of most terrarium strains is unknown, it is sufficient to conduct just a mild period of hibernation. The first step is simply to turn off the lighting, which, of course, simultaneously represents the main source of warmth in the terrarium. It is important that the snakes now undergo a short day length (less than 12 hours of daylight). After about a week they can be put into hibernation. A hibernation temperature between 10 and 15 °C will suffice, and anyone who doesn’t have a cellar or other room that cold can put the snakes in the refrigerator to hibernate.

If you are now filled with the desire to keep and breed Dice Snakes, your pet dealer can undoubtedly order them for you from a trustworthy wholesaler, for example Tropenparadies in Oberhausen, Fax +49 0208-665997