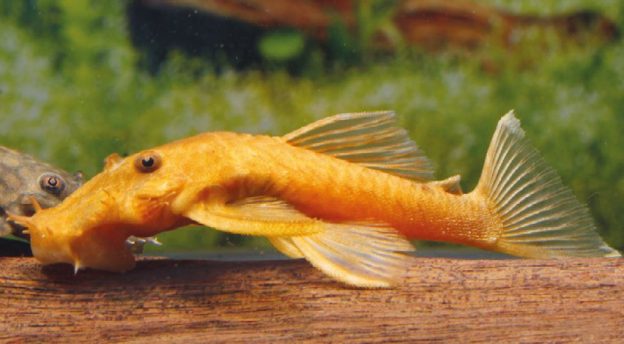 Can there be anyone who isn’t familiar with the Ancistrus species usually known simply as “the” Bristlenose Catfish? The dainty youngsters look very attractive, while adult males with the strange “tentacles” on their heads have a very bizarre appearance. The species occurs in various cultivated forms, namely albino (white with red eyes), lutino (yellow with black eyes), checkered, and long-finned. It has become a real household pet. But this and similar species represent a huge puzzle for scientists.

At present 64 species are scientifically recognized in the genus Ancistrus, but well over 100 have been originally described as Ancistrus. To the present day the majority of species are known only from preserved specimens that normally no longer exhibit much if any patterning. Hence the identification of Ancistrus is virtually impossible, even for specialists, without information on their provenance. For this reason a comprehensive revision of the genus is urgently required, but such a work would take years or even decades. According to the most recent review, by SEIDEL & EVERS, at least 93 Ancistrus species are known in the hobby, but only 20 can also be assigned to described species.
From this it can be estimated that the actual number of Ancistrus species in existence may well be significantly more than 300, as only comparatively few regions in South America have to date been traveled by aquarists and collecting for the trade likewise always takes place in the same, relatively small areas. 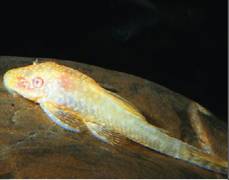 The Bristlenose Catfish was labeled Ancistrus dolichopterus in practically all books, magazines, etc published before 2005. And even today inattentive editors sometimes let this slip past. But it is now generally known that our aquarium Bristlenose doesn’t belong to the species Ancistrus dolichopterus, but represents either a cross that cannot be given a scientific name (crosses or hybrids, or bastards as they are sometimes termed, are given names only in botanical nomenclature, while the rules of zoological nomenclature forbid the giving of scientific names to such animals), or an as yet unidentified species. Ancistrus dolichopterus is a quite different fish that is known by the L-number L183 in the hobby and has often also been termed Ancistrus hoplogenys. But this name too (A. hoplogenys) is used incorrectly, as it is now believed that in reality the catfish L59 is A. hoplogenys. So to put it plainly: A. dolichopterus is one of the so-called white-edged bristlenose catfishes and comes from the Rio Negro in Brazil, A. hoplogenys is the rare Spotted Bristlenose from the Rio Guama and its tributaries (likewise in Brazil), and hence “the” Bristlenose Catfish has no scientific name and must for the time being be termed Ancistrus sp. 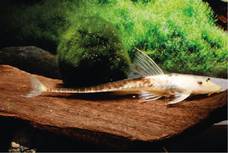 A mysterious bristlenose from Paraguay

In 1992 aquarist Kerstin Holota discovered a yellow-colored Ancistrus at an importers in southern Hessen; it had purportedly come from Paraguay along with normal-colored conspecifics. Holota bought the yellow individual and a number of others. The yellow individual turned out to be a male, which was paired with a female from the same importation. Astonishingly the very first brood included yellow fry, which meant that the
“yellow factor” in the wild fish was inherited in accordance with the second Mendellian law, so that statistically a quarter of the offspring were pure-strain yellow, a quarter were pure-strain natural-colored, and half carried the genes for both yellow and natural. Holota eventually succeeded in breeding a pure yellow strain. This yellow Ancistrus was a lutino, as it had dark, not red, eyes. This yellow bristlenose catfish received the L-number 144. L144 was a rare stroke of luck for the breeder, as for unexplained reasons the yellow specimens of other loricariid species that sometimes turn up in importations change to normal color after a while. As happened a while back with Otocinclus vestitus and O. macrospilus as well as Hemiloricaria castroi.
Unfortunately the appearance of the natural-colored L144 wasn’t documented, so its identity remains unclear. Holota seems to recall, however, that it was a red-spotted Ancistrus species; a species matching that description was widespread in the hobby at the time as Ancistrus sp. “Rio Paraguay”. 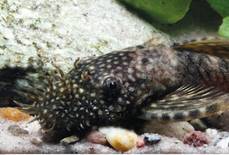 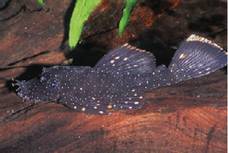 A few weeks ago the improbable happened: Aquarium Glaser in Rodgau (southern Hessen!) received another wild-caught lutino in an importation of Ancistrus from Paraguay. This Ancistrus was the species A. pirareta, which is regularly imported from Paraguay for the hobby, although it has become normal for the fish to be labeled A. tamboensis in the trade. A. tamboensis is, however, a species from the Ucayali drainage in Peru. It looks generally similar to A. pirareta, but has the light dots only on the anterior half of the body. As far as is known A. tamboensis isn’t available in the hobby. The rare lutino – it is an extraordinary stroke of luck for such a strikingly colored fish to survive in the wild at all, let alone end up in the net of an aquarium-fish collector – has gone to a breeder of A. pirareta along with a number of normal-colored specimens. Who knows, perhaps the history of L144 will repeat itself? L144 has in fact largely died out, supplanted in the trade by a more attractively colored yellow variant of the aquarium Bristlenose (Ancistrus sp.).

All this demonstrates that it isn’t necessary to travel to the tropics to come across unexplained puzzles in the realm of fishes. Sometimes they can be found in a corner of the aquarium store… 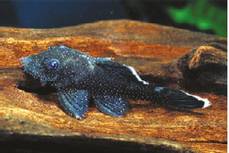