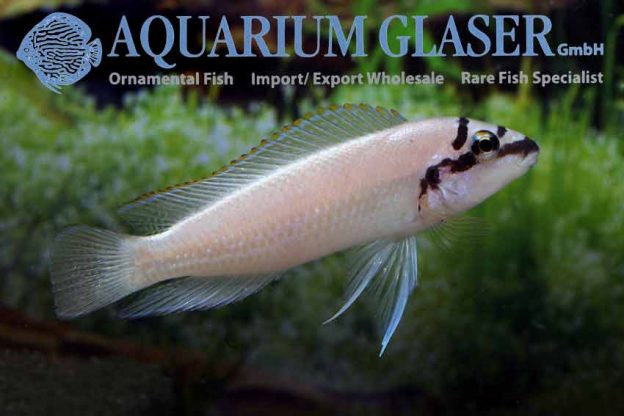 This pretty cichlid from Lake Tanganyika is only very, very occasionally found in the trade. This is hard to understand. Despite the fact that the coloration is rather simple, the fish are quite conspicuous. Keeping and breeding can be compared with the closely related genus Julidochromis. Maximum size of Chalinochromis brichardi is about 12 cm. 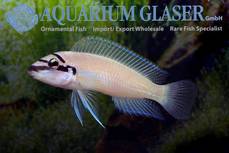 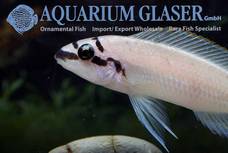 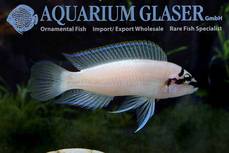 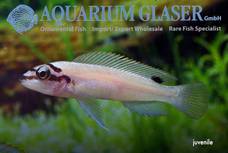 Most gobies live in the sea. And most gobies stay small, usually less than 10 cm. So Oxyeleotris marmorata, the Marbled Sleepergoby, is an exception in more than only one respect. The species is a giant among the gobies and becomes more than 50 cm long. And usually it lives in pure freshwater; only occasionally it is found in brackish water. 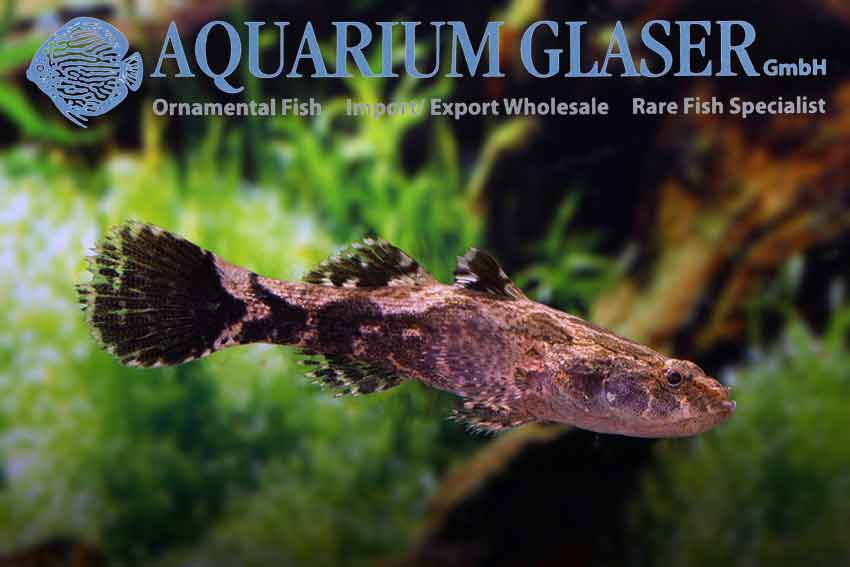 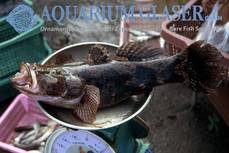 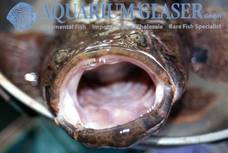 Oxyeleotris marmorata is a predator. A short look in the open mouth of the fish says more than thousand words. The species can swallow fish that have about have of the length of the goby itself. However, when kept in an aquarium this creature becomes very tame and can be easily fed via a forceps. Juveniles also feed on earthworms and frozen fish food.

The Marbled Sleepergoby is a calm fish that will not swim if it is not necessary. So the species does not need – compared with the size of the fish – very large aquaria. 200 litres per animal are quite acceptable. However, they are kept best alone, only one fish per tank, because they can be pretty pugnacious against conspecifics. 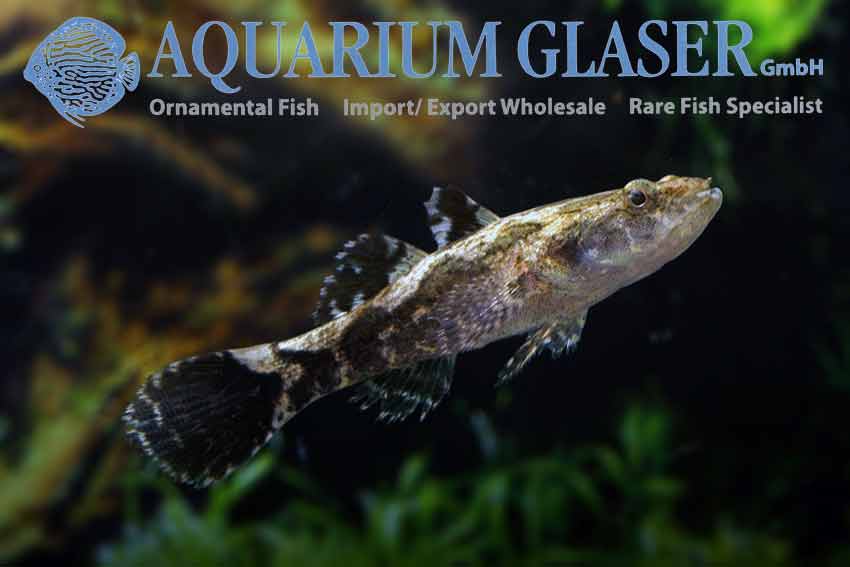 Oxyeleotris is a cave spawner that produces tens of thousands of eggs. The eggs are really tiny. There are no reports of a successful breeding in captivity, but most probably it has never been tried at all. The species has a very wide distribution in South-East Asia and is very common wherever it appears. 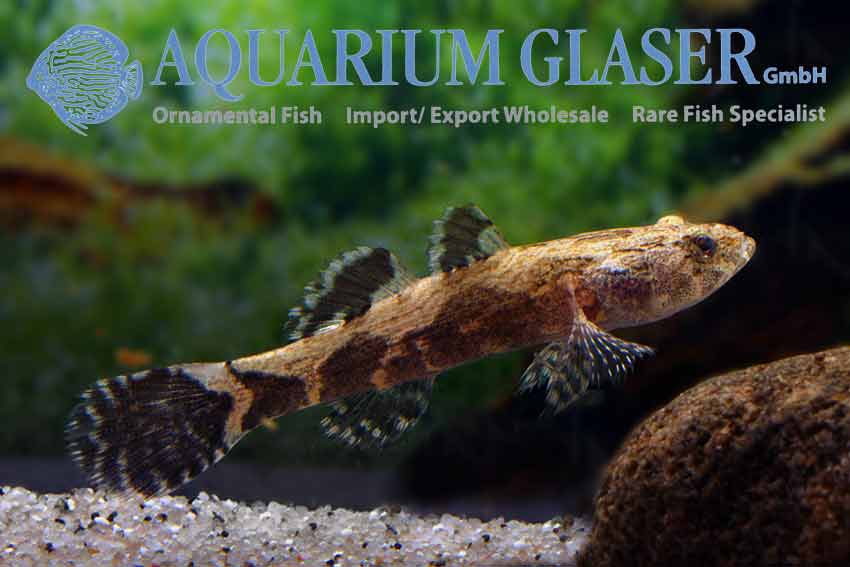 We have obtained juveniles recently, so fans of predatory fish have now the chance to risk an attempt. 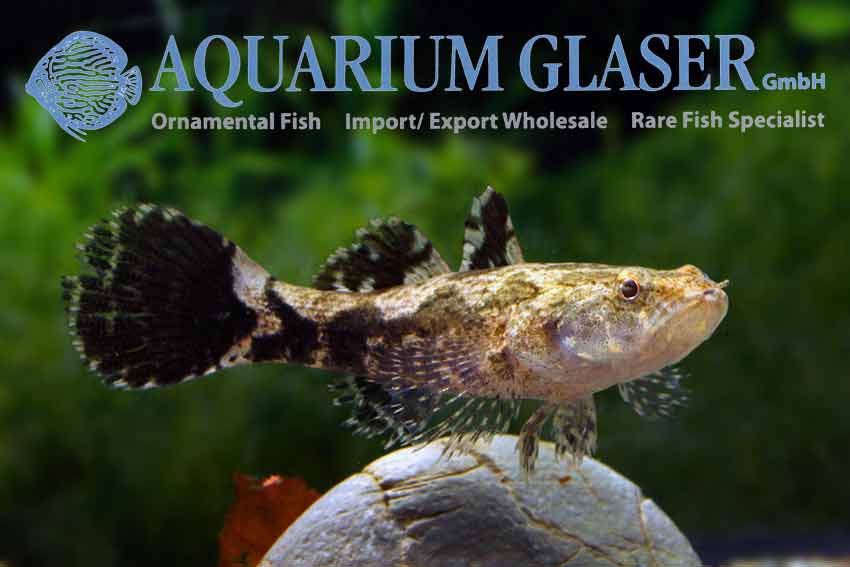 After quite a long time we were able now to import again one of the smallest species of Polypterus, namely Polypterus retropinnis from the Congo. This bichir has been thought to represent an undescribed species for a while, but then it was found that it has been confused with the only recently described species Polypterus mokelembembe. 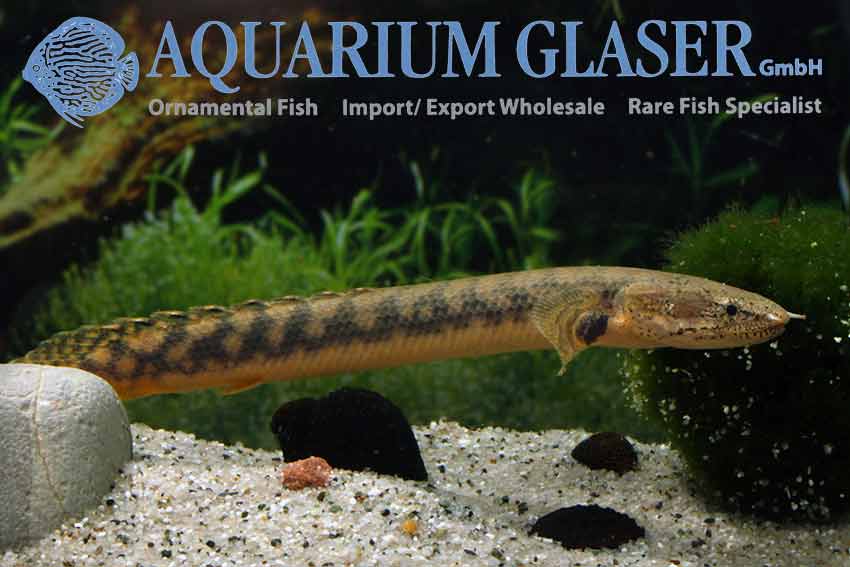 By the way: we also have the very rare P. mokelembembe in stock …. See http://www.aquariumglaser.de/en/polypterus-mokelembembe_de_1218.html for details 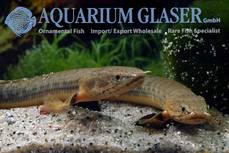 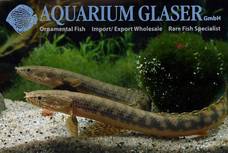 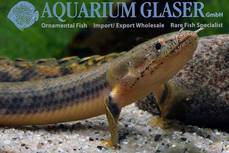 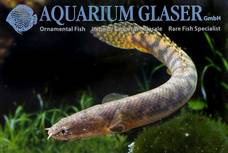 Polypterus retropinnis attains a maximum length of “only” about 30-40 cm and is a very slender species. The peaceful fish are a good choice for community tanks with other large, but peaceful Aquarium fish. 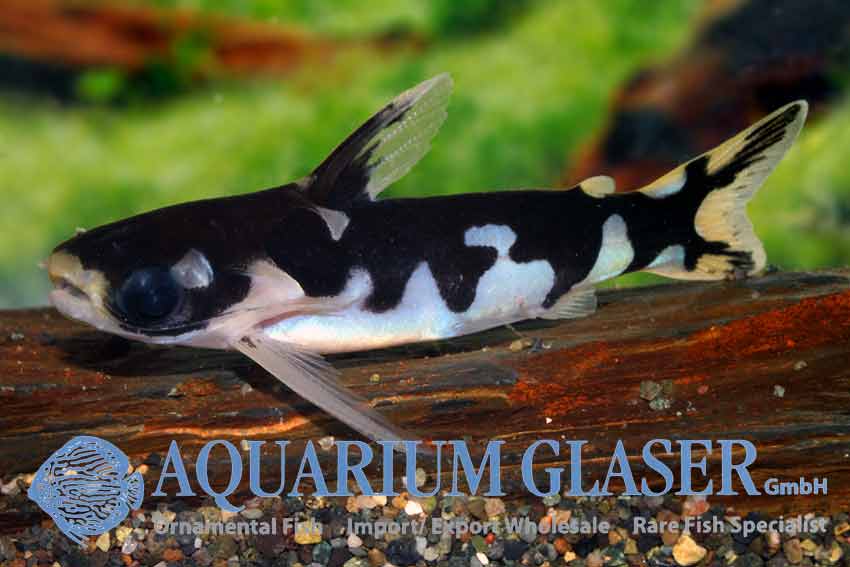 Species of Tatia are night-active. So often hide hide during acclimatisation the whole day through. One must take care that the animals get enough food in that phase. Settled fish will come out of their hiding place when fed during during daytime. 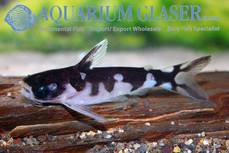 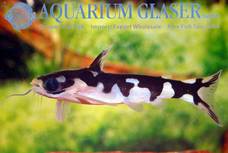 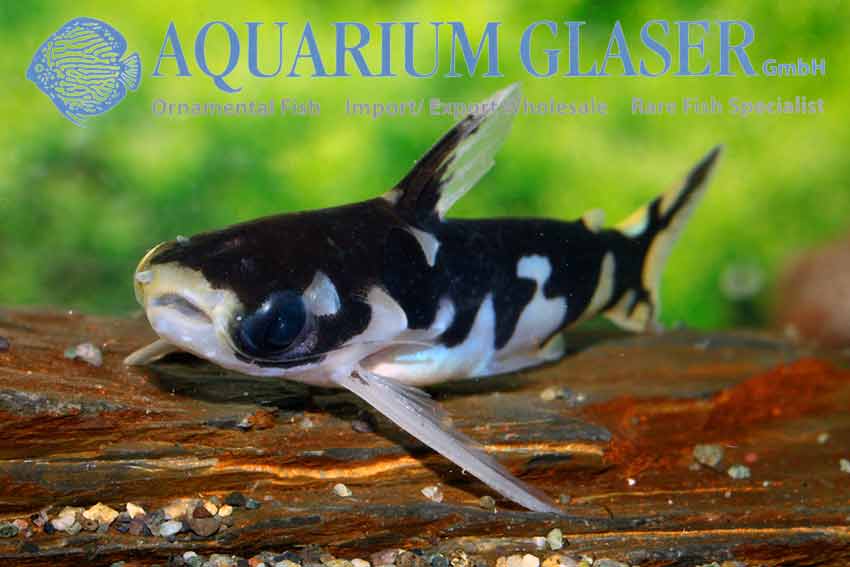 Among the most unusual species of freshwater snail is the Red Spotted Bella Snail, Paludomus loricatus, from Sri Lanka. The eyes of this snail are very attractive coloured, brightly red-orange. Around the mantle are numerous folds of the same colour. 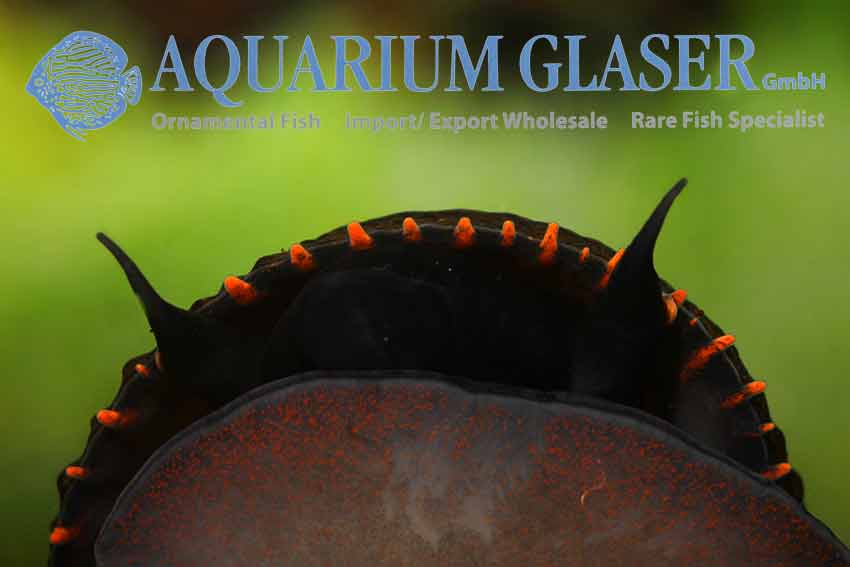 We are informed on the biology of P. loricatus by Starmühlner (Starmühlner, F. (1974): The freshwater gastropods of Ceylon. Bull. Fish. Res. Stn. Sri Lanka, 25, 97-181). According to him, the snails inhabit clear, very clean, fast running streams in the crystalline uplands of South-West Sri Lanka (altitude 60-700 m). The snails prefer to crawl near the water surface on rocks and stones in a current between 30 and 100 cm/s; sometimes they are also found outside the water. The water is very soft (total hardness 0.5-1.2°dH), the pH is between 5.8 and 7.1, the water temperature between 18 and 27.3°C. The snails feed on Aufwuchs and detritus. It is thought that they are – like all members of the genus Paludomus – are ovo-viviparous, eg that they give birth to completely developed youngsters. 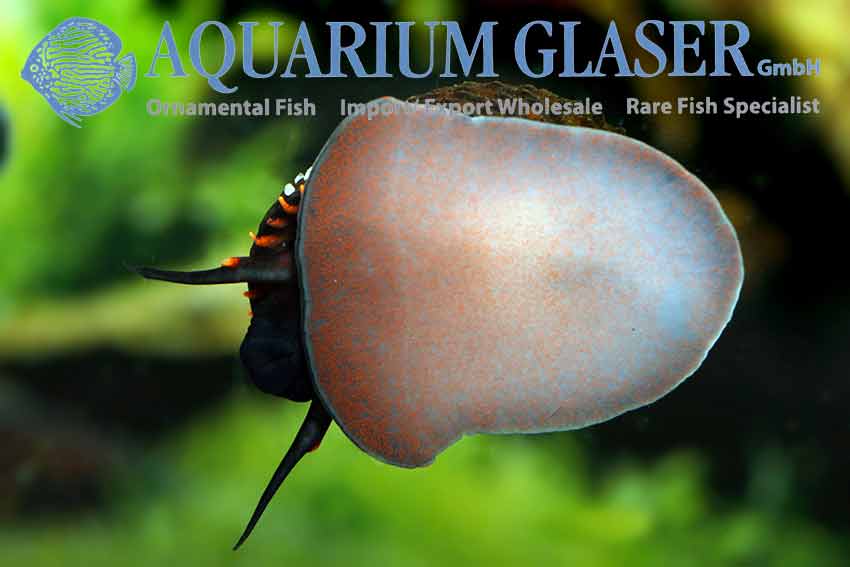 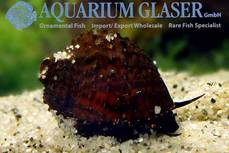 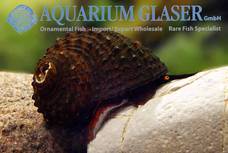