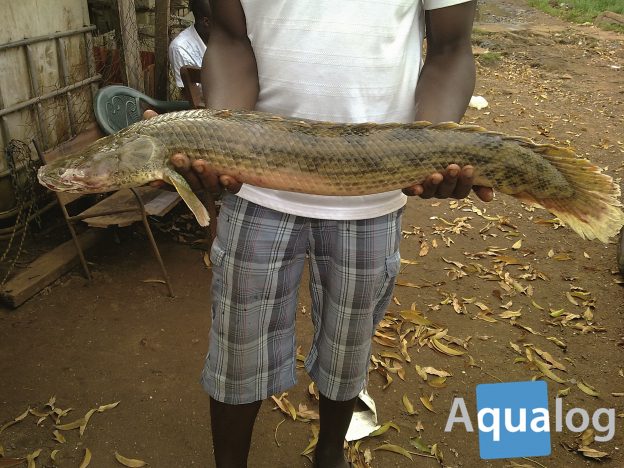 Some species of animal are mythical, legendary. Sometimes it is completely
unknown whether they actually exist or are merely the products of fantasy,
as in the case of the Yeti or the Loch Ness Monster. The study of such phenomena is the province of cryptozoologists. Sometimes they discover
new species of animals whose existence was completely unsuspected, for
example the Dwarf Hippopotamus, the Okapi, and the Congo Peacock.

In the case of the Guinean Bichir, Polypterus ansorgii, matters are somewhat different. It exists in the form of three preserved specimens that BOULENGER used as the basis of the description of the species in 1910. All three specimens were caught together in the River Corbal at Tchitoli in Portuguese Guinea (now Guinea Bissau).
When, in 2004, I published my book on bichirs, those were the only three specimens available to me. They are now stored in the museums in Vienna (two individuals) and London (one specimen). Back then I had a
slight suspicion that the three fishes might be hybrids, that is, crosses between other species, or a rare color mutation, as no additional specimens had ever been found since.
But then, during the preparation of the first description of Polypterus mokelembembe at the Africa Museum in Tervuren (Belgium), I discovered two additional specimens collected by C. B. POWELL in Nigeria in 1991 (one in the Orashi River at Odieke, one in Lake Isemu) and which Guy TEUGELS had quite correctly identified as P. ansorgii. So they did exist! The two Nigerian specimens were – just like the type series – relatively small, around 20 cm long.

Thereafter I renewed my efforts to obtain live specimens of this species in order to study them more closely. Unfortunately for a
long time my efforts weren’t crowned with success. Usually the fishes traded as P. ansorgii were P. bichir, a close relative of this species. But then I obtained four Polypterus from Aquarium Glaser’s supplier in Guinea,
Fouad Chaloub, two of which were without doubt P. ansorgii. The fishes were around 25 cm long. That was in winter 2010. The fishes continue to enjoy the best of health and by now have grown on to around 40 cm in length.

The similarity between the Guinea Bichir and P. bichir is enormous. Essentially these fishes can be distinguished only by their color pattern. While P. bichir exhibits a longitudinal stripe pattern, P. ansorgii has a pattern of rectangular spots (checkerboard pattern) on its flanks.
It was to be expected from this obviously close relationship that P. ansorgii wouldn’t be a dwarf species but similar in size to P. bichir, which grows to more than 60 cm long. A further indication that P. ansorgii
grows large is that despite their 40 cm of length my fishes aren’t yet definitely sexable (in all Polypterus species sexually mature males can be recognized by the greatly enlarged anal fin).
And now Fouad created a real sensation. He sent us a photo of an 86-cm-long P. ansorgii that he and his team had caught in the River Koliba, a tributary of the River Corbal near a town called Gaoual – that is, topotypical with the type specimens of the Guinea Bichir. Unfortunately the fish lost its life as a result of an accident. Nevertheless it provided unequivocal proof that Polypterus ansorgii is one of the largest of all the bichirs.

The Guinea Bichir in the aquarium

The maintenance of Polypterus ansorgii in the aquarium is easy. They are very quiet, rather shy, and very peaceful predators. Like all bichirs they tend to be crepuscular fishes, which, however, will also come out to feed in the daytime once they have settled in. They are best fed with whole, deep-frozen fishes around 6-8 cm in length (Stint).
Guinea Bichirs are indifferent towards conspecifics and fishes of other species. Only at feeding time do they jostle one another now and then, but this seems to happen more by accident – these are scent-
oriented fishes in which sight plays only a subordinate role. I keep my fishes together with African Pike Characins (Hepsetus odoe), a West African lungfish (Protopterus annectens), and a number of catfishes. A red
jewel cichlid (Hemichromis sp.), originally introduced as a feeder fish, tyrannized the bichirs to such an extent that they stopped feeding for a number of weeks, until the little thug, which measured barely 8 cm in
length, could finally be caught and removed. So it is necessary to be somewhat careful when choosing tankmates for these gentle giants among fishes.
All in all it is once again thanks to the aquarium hobby that a puzzle more than a hundred years old has been solved and the Polypterus ansorgii myth laid to rest. 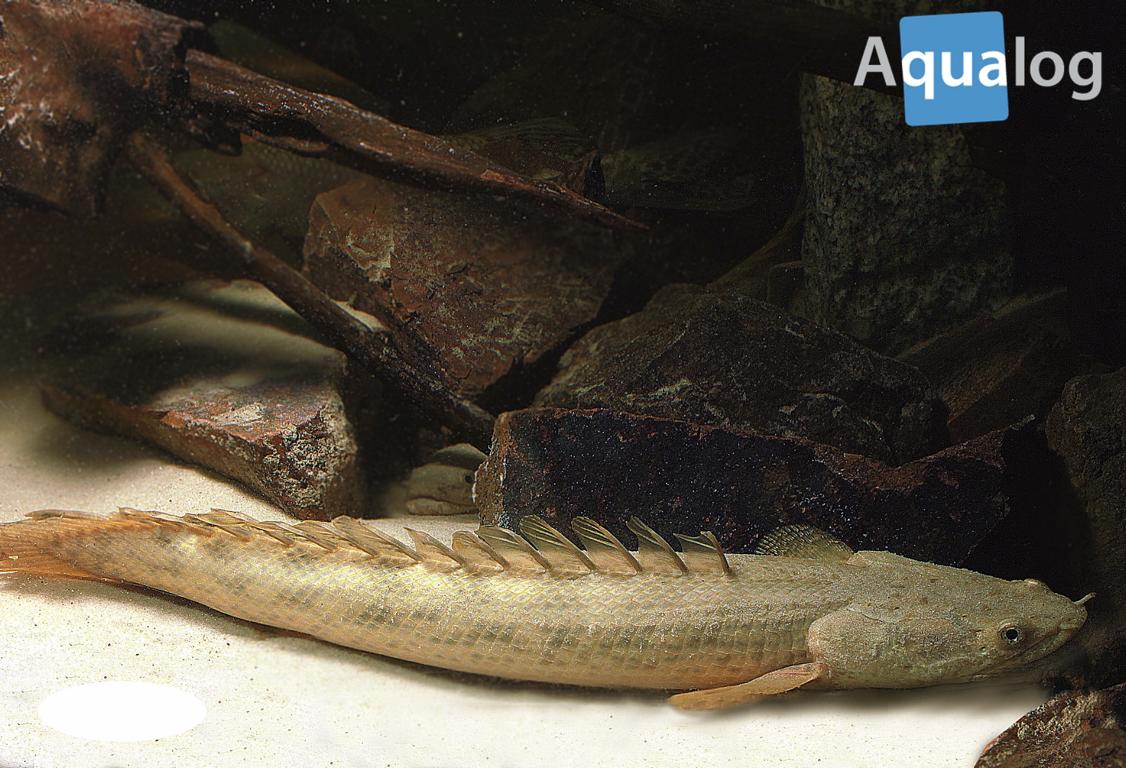