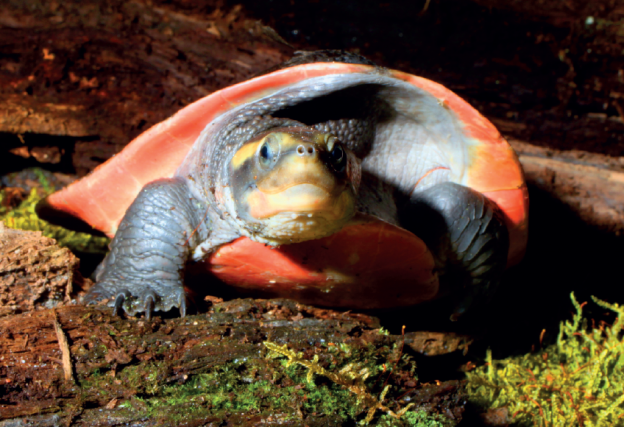 There is always a demand for easy-to-keep, attractive, lively turtles that don’t grow too large. And the Redbellied Shortneck Turtleis just the animal to provide all these attributes. The tongue-twister of a popular name is undoubtedly the most complicated thing about this turtle!

These attractive turtles, in which males attain a carapace length of some 20 cm and females a good 25 cm, have been in the hobby since the late 1970s. The past master of the terrarium hobby, Wilhelm Klingelhöffer, may didn’t mention them at all in his standard workTerrarienkundein 1959, but in 1984 Obst, Richter & Jacob wrote in their classicLexikon der Terraristik und Herpetologiethat the species had been bred for generations and was suitable even for beginners. What a change in the space of just 20 years or so! Until the 1990s captive-bredEmydura subglobosawere available everywhere, but then things all went quiet as far as the species was concerned.
Not until around 10 years ago did the species resurface and since then it has enjoyed constantly increasing popularity.

Confused nomenclature
Initially the Redbellied Shortneck Turtlewas known in the hobby under the nameEmyduraalbertisii. This species was described in 1888 by Boulenger, who regarded it as distinct fromE. subglobosa. But it was subsequently realized that the two species were one and the same and soE. albertisiibecame a junior synonym ofE. subglobosa, which had been described back in 1876 by Krefft. The species is quite obviously rather variable and other names have also been assigned to it; the most recent scientific review of the turtles of Australia (Georges & Thomson, 2010) distinguishes the typical red-bellied form from southern New Guinea (where it occurs from the Vogelkop and Bomberi peninsulas in the west to the Kemp Welsh drainage in the east) and the Jardine River on the Cape York Peninsula in Australia asEmydura subglobosa subglobosa, and another, yellow-bellied subspecies, which in addition develops a broader head with age,E. s. worrelli, from the upland drainages of the Arnhem Land plateau in the Northern Territory and the rivers that empty into the Gulf of Carpentaria. The scientific description of the latter was severely criticized by the authors, but that doesn’t alter its validity. On the other hand it cannot be ruled out that the two subspecies actually represent separate species.
Be that as it may, wild-caught Redbellied Shortneck Turtlesare so rare in the trade that one can safely say that they don’t occur at all, and that all the strains found in the hobby correspond to the nominate form, whileE. s. worelli, is maintained only by a small number of specialists, if at all. 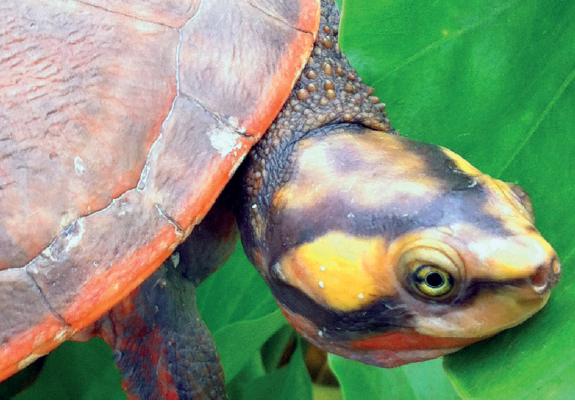 Mainly aquatic
The Redbellied Shortneck Turtleis a fluviatile turtle that only occasionally comes ashore. There are reports on maintenance that state that they can be kept in an aquarium that is completely without a land area, but I don’t recommend that. Although the species suns itself appreciably less frequently than many other turtles, on the one hand individual specimens differ considerably in their preferences in this respect, and on the other the presence of a dry (!) land area helps prevent disease as, being an inhabitant of running water,E. subglobosahas high requirements as regards water quality. If the latter is poor then these turtles tend towards infectious diseases of the skin and shell. But even when the water is in good order these turtles, like all creatures, can sometimes fall ill, and they then like to seek out the land area and sun themselves, and in this way slight infections often clear up by themselves, without any intervention at all by the owner. 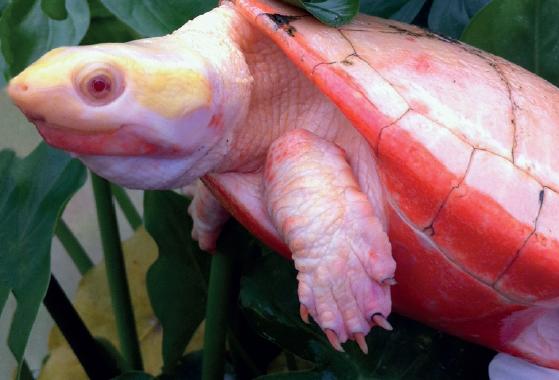 The aquarium for Redbellied Shortneck Turtles
Because of its splendid pink, black, and white colorationEmydura subglobosais an excellent ornamental animal that can be readily maintained in large aquaria with a variety of décor. It is particularly advisable to keep fishes in the same aquarium, as the latter will very quickly indicate (by falling ill) that the water quality isn’t as good as it might be, and they also help produce a varied, constantly interesting scene. Adequately fed turtles rarely go hunting fishes. Occasionally a sick or weak small fish may fall prey to the turtles, but the same would also happen in the wild.
A tank of length 150 cm or more should be chosen for a paludarium of this type. This will make it easier to set up and will suit the turtles very well, as they are excellent swimmers with a strong urge to keep moving. The water chemistry is of lesser importance, while the water temperature should be 22-26 °C. A powerful filter will ensure clear, good quality water. For safety reasons it will ideally contain an integrated heater – a separate heater-stat such as is used in fish-only aquaria is less suitable because of the risk of breakage by larger turtles. It is extremely important that the air temperature above the aquarium is not significantly lower than the water temperature, as otherwise respiratory diseases can easily occur. The temperature on the land area beneath the heat lamp should reach 30-35 °C. It is wisest to choose a spot lamp with a UV component. Heavily gravid females in particular will make extensive use of this “sun bed”. 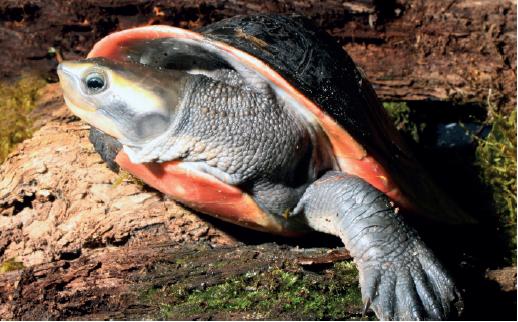 Redbellied Shortneck Turtlesare usually very peaceful among themselves so group maintenance is possible. If space permits one male should be kept with several females, in order to allow the females a little rest from the constant attentions of the male. But even males tolerate one another astonishingly well. After the onset of sexual maturity the males can be recognized very easily by the length of their tails – almost double that of the females.

Mainly carnivorous
Feeding the Redbellied Shortneck Turtleis easy. These turtles are mainly flesh-eaters (carnivorous). Adults can be fed with proprietary food sticks, driedGammarus, and deep-frozen foods such as shrimps, whitebait, mussel meat, squid, etc. As far as possible warm-blood meat shouldn’t be offered, as it is only poorly digested and heavily pollutes the water. But balls of raw meat are useful treats if the turtles need to be given medication via their food.
The rearing of specimens available in the trade presents no problems. Essentially they should be treated in the same way as adults, though naturally the food should be correspondingly smaller. In addition to the items listed above, deep-frozen bloodworms (for aquarium fishes) are an important food for rearing.
You can try offering vegetable food as well now and then, for example sweet fruit, Dandelion, or similar. Some individuals enjoy this a lot, while others won’t touch it – this is something their owner must find out for himself. It should be borne in mind, however, that green food is highly laxative and hence should be used with care. 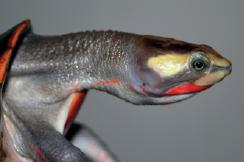 Easy and productive to breed
The world demand for Redbellied Shortneck Turtles in the terrarium trade has long been met by captive-bred stocks. Even though no species of animal has ever yet gone extinct through being traded alive, this is a positive sign, as it shows that we are getting everything about the maintenance of these attractive turtles right.
Albino specimens (in this case white with red eyes) sometimes occur as a very rare mutation among captive broods.
The Redbellied Shortneck Turtle is very productive and a female can easily produce several clutches per year, each comprising 6-12 (maximum 15) eggs. These turtles aren’t very demanding when it comes to somewhere to lay their eggs. If necessary they will even lay them under water, but such eggs are not normally viable. The eggs should be incubated in damp Vermiculite or similar at 27-30 °C and 90-95% relative humidity, with hatching taking place after 45-60 days.
The courtship behavior of the male, which is characterized by a very rapid nodding of the head, is interesting to watch. If a male is bothering the female(s) excessively then it is advisable to remove him from the group, at least for a while.
Being inhabitants of the tropics, these turtles don’t actually require special over-wintering. It has, however, proved beneficial to keep them for 3-4 months at a lower water temperature (20-22 °C – no cooler, and if in doubt somewhat warmer is better!) so that the female(s) can recover properly from egg-laying. 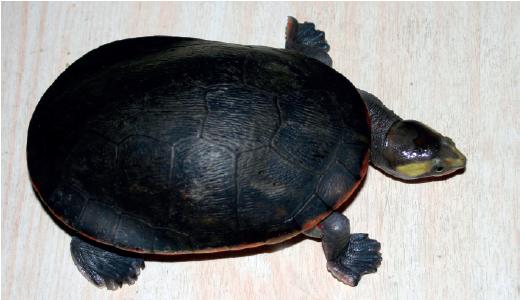 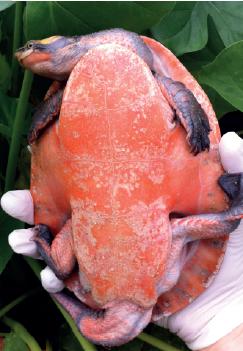 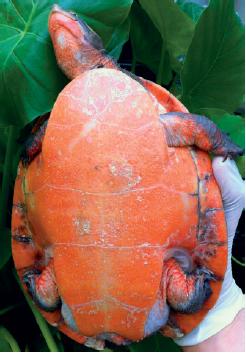