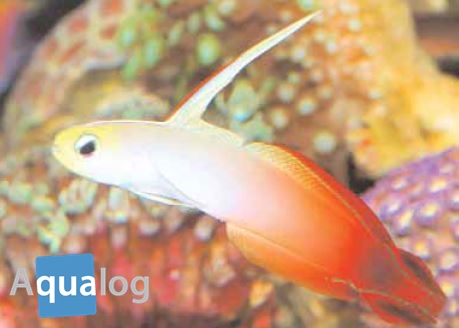 The gobies are the most species-rich group of fishes in the world. The vast majority of species live in the sea, but there are also numerous freshwater species. The gobies also include some of the smallest fishes on Earth, and the majority of species remain smaller than 10 cm. The gobies discussed here belong to the wormfishes (Microdesmidae) and the true gobies (Gobiidae), and they are among the most beautiful of all aquarium fishes.

The firefish genus (Nemateleotris) contains three species and is widespread in the Indo-Pacific. The Fire Goby (N. magnifica) has the widest distribution and is also found in the shallowest water of the three species (from 8 m of depth) and is extraordinarily common. Hence these gorgeous fishes, which grow to around 8 cm long, are almost permanently available in the trade, often in large numbers. But you shouldn’t be misled by the peaceful co-existence of these fishes in the dealer’s tank. This happens only under the relatively bare, overpopulated conditions found in such aquaria, where the fishes abandon their territorial behavior – a phenomenon also known from numerous other fishes. In normal-sized tanks with normal décor they should be kept only singly or in pairs, with the latter always the preferred method, as then you will be able to observe the entire behavioral spectrum of these lovely fishes – which is, after all, the main point of the aquarium hobby. 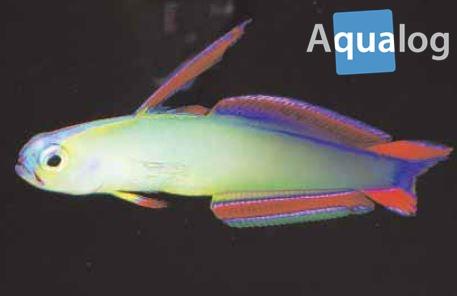 Sexual dimorphism
This, of course, leads us to the question of how to tell the sexes apart. Unfortunately the answer is, you can’t, at least not with certainty. There are, however, two tried and tested ways of obtaining a pair. Firstly, buy two individuals of as different a size as possible. Secondly, buy a group of the youngest individuals possible (no larger than 4 cm) and allow a pair to form naturally. The surplus specimens must then be removed, though.

Other species
The other two species of the genus, the Elegant Firefish, N. decora, and Helfrich’s Firefish, N. helfrichi, are not quite as widely distributed and live mainly at greater depths (around 30 m). Hence they are less common in the trade and more expensive than the Fire Goby. However, their maintenance (in pairs) doesn’t differ from that of the Fire Goby.

Feeding
All firefishes are plankton-feeders and hence will enjoy any of the usual fish foods. They usually swim in pairs above a cave, into which they retreat when any presumed danger threatens. Firefishes are rather nervous and will generally jump out of the aquarium in their panic, so the tank must be covered tightly. These gobies do not harm invertebrates.

Breeding
Firefishes are short-lived fishes that live to around two years old in the aquarium, but, obviously, rarely attain this age in the wild. These fishes spawn in caves and it is thought that the spawn is guarded, but there have been no actual observations to confirm this. The larvae are pelagic, and to date there have been no reports of successful breeding.

Symbiotic gobies
The tiny (barely 4 cm long), very rarely imported species Lotilia graciliosa belongs to a totally different family, namely the true gobies (Gobiidae). The genus Lotilia is monotypic, in other words it contains just this one species, which is distributed in the Red Sea and Western Pacific. This little goby has been imported only extremely rarely, and the same applies, only even more so, to its partner crustacean, the pistol shrimp Alpheus rubromaculatus. 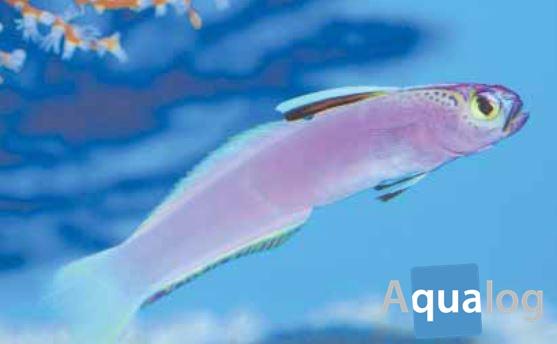 There are a relatively large number of species of symbiotic gobies. They live in caves excavated by the shrimp with which they live in symbiosis. In return for the digging work, the gobies protect their almost blind shrimp against potential predators. The interesting thing about this is that every symbiotic goby species lives only with its own specific shrimp species. In theory both goby and shrimp are also capable of living alone, but the fact that this fascinating mode of behavior has apparently developed so frequently via parallel evolution demonstrates that it is very obviously a successful model for survival.
Despite the high prices charged for these little jewels, I can only recommend that you grab them whenever they are available. The maintenance of these oddly-matched teams isn’t difficult, but sufficient depth of substrate should be provided for them to carry out their digging activities. Feeding is no problem, as both goby and shrimp will readily accept all the usual foods. Ideally these little creatures should have an aquarium of their own, and it doesn’t need to be all that large. In such an aquarium the fascinating behavior of these lovely creatures can be observed undisturbed.