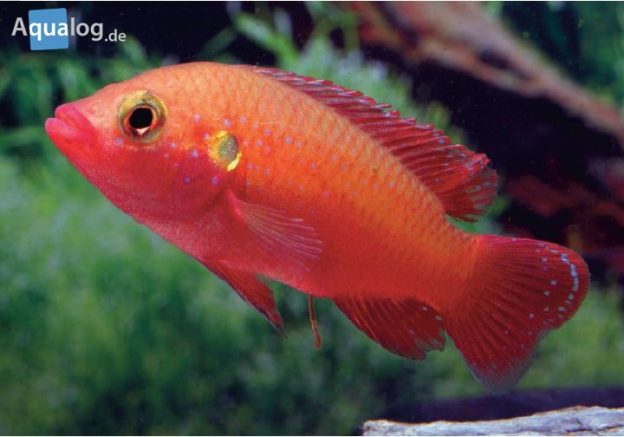 The red jewel cichlids are some of the most beautiful freshwater fishes on Earth. They are also very easy to keep and breed. But identifying the species is one of the most difficult exercises in ichthyology.

Until 1979 things were all very easy in both the aquarium hobby and science alike. Only two species of cichlids were recognized in the genus Hemichromis, namely the Jewel Cichlid, which was termed Hemichromis bimaculatus, and the Green Jewel or Five-Spot Cichlid, which was called Hemichromis fasciatus. In fact several other species had been described prior to 1979, but the complexity of characters in Hemichromis, more precisely the highly individual variation in color and body form depending on ecological circumstances, coupled with massive mood- and age-dependent variability in color, invariably led to the species characteristics given in the descriptions being regarded as insufficiently distinctive.

Then Paul V. Loiselle published a revision of the genus Hemichromis in which he distinguished three species of green jewel cichlids – namely Hemichromis fasciatus, H. elongatus, and H. frempongi – and eight species of red jewel cichlids – H. bimaculatus, H. cristatus, H. paynei, H. guttatus, H. stellifer, H. cerasogaster, H. letourneauxi, and H. lifalili. From this time on aquarists took a somewhat closer look and interpreted the revision (which unfortunately contained mixed-up illustrations) in a variety of ways. Repeated attempts were made to resolve the resulting confusion. Thus Freyhof (1995) corrected a number of fundamental points and was followed by many authors, for example Linke & Staeck (2002) and Lamboj (2004). Nevertheless a number of misapprehensions obstinately persisted, for example the idea that a (rather aggressive) cultivated form of red jewel that didn’t exist at all in the wild, was being mislabeled as Hemichromis lifalili. The “true” H. lifalili, by contrast, was hardly ever maintained in the aquarium and kept only by a few specialists. 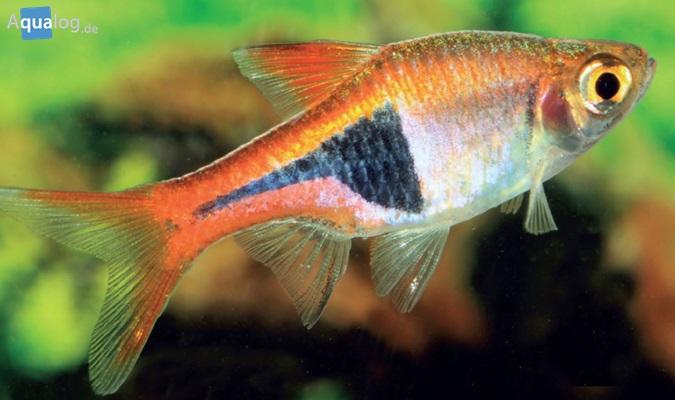 This background information is required in order to understand why determining the specific identity of red jewel cichlids is so tricky. But is that really so important? Do you need to know what an animal is called in order to get enjoyment from it? Of course not. But even so the question of specific identity isn’t unimportant, as unfortunately increasingly more species of animals are disappearing forever from our planet without our ever registering their existence at all. Given that Man is responsible for the majority of these extinctions of animal and plant species, because he – often without realizing it! – alters their environment to such a degree that the animals and plants can no longer exist there, humanity has a responsibility to record the diversity of the life forms found on Earth. We can only protect what we know about! The aquarium hobby is the most important aid to science when it comes to achieving this task in the realm of the small fishes. Apropos of which, it cannot be repeated often enough that the maintenance and breeding of wild-caught fishes in the aquarium is active species conservation! No species has ever become extinct as a result. 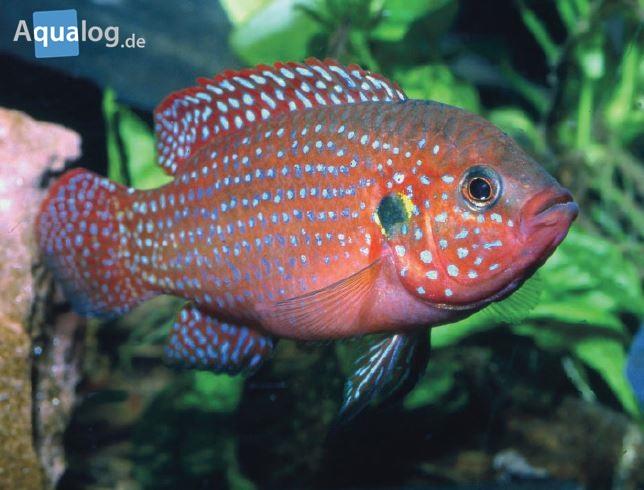 Hemichromis sp. “Fire Lips” arrived at Aquarium Glaser in the form of captive-bred specimens, and nothing could be learned of their provenance. Naturally, in my role as resident zoologist I was asked to identify the species, but had to pass: quite simply the combination of characters doesn’t concur with any species of Hemichromis known to date! The body shape and distribution of the iridescent blue spots (the so-called iridophores) most closely matches the species Hemichromis guttatus, but that species always has a readily visible, elongate-oval spot on the center of the body. And no lateral spot of any kind is apparent In the “Fire Lips” (there are around 25 specimens). Be that as it may, the fishes looked so attractive even in the photographic aquarium that I decided to take a pair home with me in order to breed them and see what the offspring turned out like. 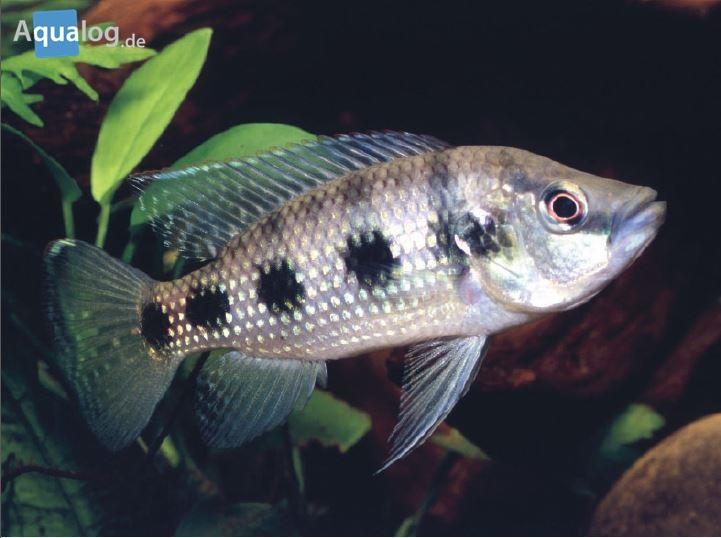 This small red jewel cichlid – males grow to about 10 cm long, females remain smaller – is undoubtedly the most widespread species of the genus in the hobby. And the majority of the so-called “lifalili” cultivated forms were probably H. guttatus crosses, as this cichlid exhibits a wide range of color variants even within one and the same population. While the body shape and the form and position of the lateral spot are fairly uniform within a population, the coloration varies considerably. Thus there are not only brilliant red but also gray-green individuals as well as numerous transitional and intermediate forms. This is independent of sex. The number of iridophores, ie the iridescent blue spots, is likewise highly variable. There are specimens with very many iridophores and also individuals with very few, and this applies to both the red and the gray-green fishes. The reasons for the polychromatism – the technical term for color variation – are a complete mystery. Because we aquarists always prefer to breed the fishes that are most beautiful in our eyes – ie as red as possible and with numerous iridophores – and this coloration can evidently be fixed genetically, aquarium strains look very uniform compared to wild-caught stocks.

Aquarium Glaser has recently obtained wild-caught H. guttatus from the Benue River in Nigeria and I also took home a pair of these fishes for comparison with the “Fire Lips”. In so doing I simply made sure I had a pair and deliberately ignored their coloration. 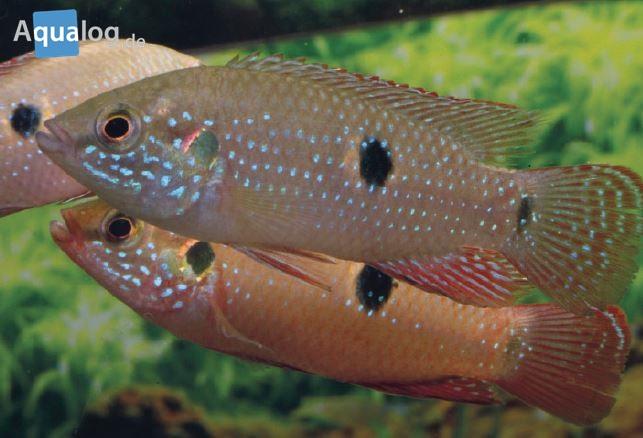 Male and female red jewel cichlids can told apart very readily. Males are larger, and have more prolonged ventral fins and a steeper forehead. I have never yet known a pair put together arbitrarily that didn’t get along. The various wild forms of Hemichromis guttatus at least are usually very peaceful fishes, towards both conspecifics and other species. Of course you need to keep an eye on them when they are spawning and leading young, as they are exceptional parents and will vigorously defend their territory and their offspring. Red jewel cichlids of this group are all open spawners with both adults performing parental care: that is, they spawn on a hard substrate (a rock, a piece of bogwood, etc), but not in a cave, and both parents guard and shepherd the young.

Water chemistry (hardness and pH) is unimportant as long as it lies within normal parameters, ie if possible pH not appreciably less than 6 or more than 8.5 and hardness between 3 and 25 °dGH. The water temperature should be between 22 and 28 °C. These cichlids will eat any of the usual fish foods, be it dry, frozen, or live. The fry initially have a typical black longitudinal streak and are slightly reminiscent of Nannostomus species. They can be fed with Artemia nauplii from the first day on. Later on they lose the longitudinal stripe and at the same time abandon their juvenile shoaling behavior. Interestingly, however, the young can be left with the parents for a long time, and aren’t attacked even at a length of 2-3 cm, when they already look like miniature copies of their parents. Sexual maturity is attained at the age of around four months, by which time the young males are around 5 cm long. In my view they are at their most attractive a length of 6-7 cm, as they are fully colored but still graceful. Later on (at least in the aquarium) they become very “beefy” and are less aesthetically pleasing, and the coloration looks a bit washed out.

The way the aquarium is set up is all the same to red jewel cichlids. It shouldn’t be too brightly illuminated and include some hiding-places. A standard off-the-shelf 60-cm aquarium is perfectly adequate for breeding, though in that case there should be no other fishes in the aquarium. Plants aren’t usually vandalized by these fishes. 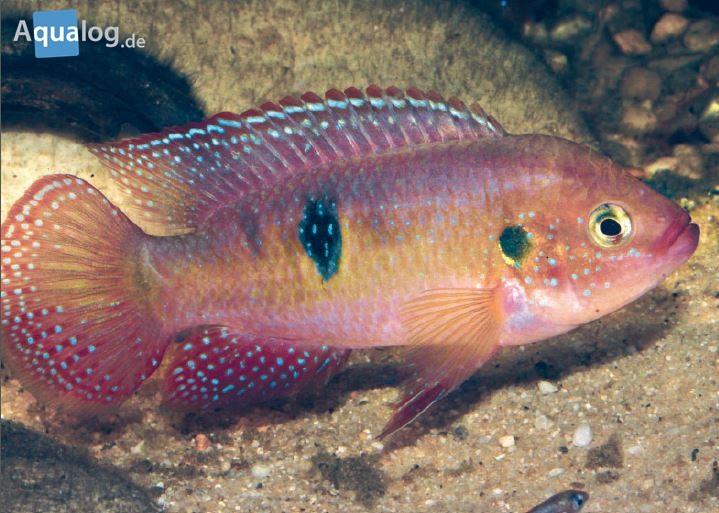 Both of the pairs I took home did justice to their kind, spawning in short order and almost simultaneously (at an interval of only two days) so that I had a good opportunity for comparison. Except for the missing lateral spot the “Fire Lips” resembled the wild-caught Hemichromis guttatus in every detail. Both females assumed a breathtakingly beautiful brood-care dress, in which they became bright yellow from the back to somewhat below the center of the body, while the belly was brilliant red in color. By contrast both males assumed a rather modest coloration in which the area from the back to well below the center of the body was warm yellow and the breast a delicate red. The eyes were bright yellow in the females, but only brass-colored in the males. 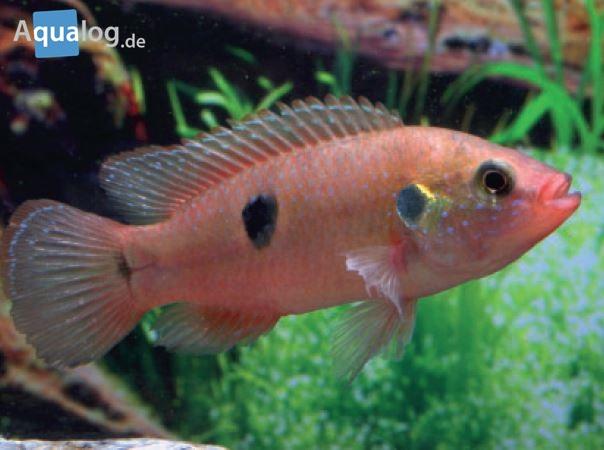 The moment of truth came when the “Fire Lips” young lost their infant stripes. Almost all of them developed a perfectly normal Hemichromis guttatus spot! Only eight out of the 134 juveniles that I raised exhibited a greatly reduced lateral spot or none at all. So it can be stated with a high degree of certainty that Hemichromis sp. “Fire Lips” is a selectively cultivated form of Hemichromis guttatus. The question remains as to whether the lateral spot will disappear in all individuals later on (at the time of writing the young are just eight weeks old). We will wait with bated breath……. 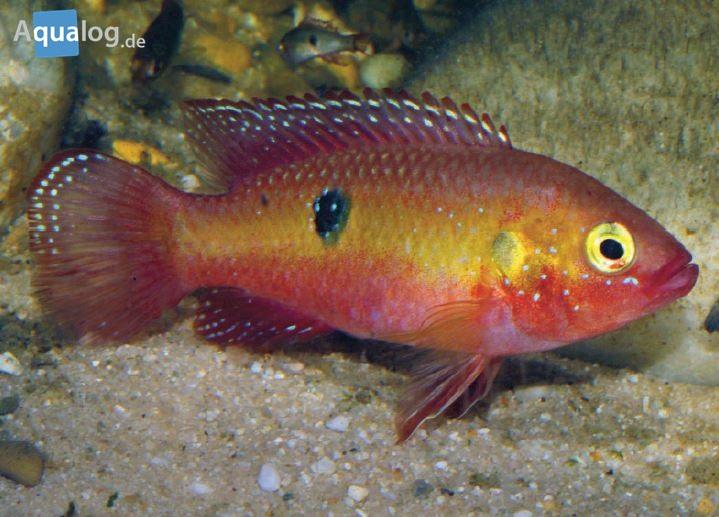 Aquarium Glaser has recently obtained wild-caught H. guttatus from the Benue River in Nigerian and I also took home a pair of these fishes for comparison with the “Fire Lips”. In so doing I simply made sure I had a pair and deliberately ignored their coloration. 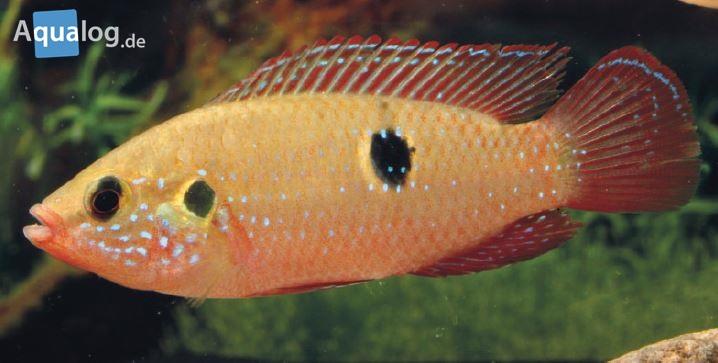