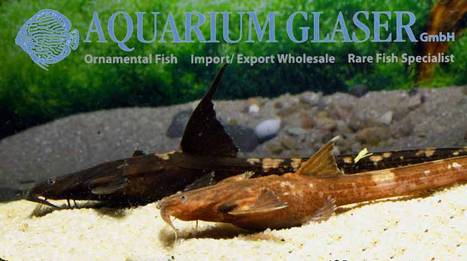 We received this beautiful banjo cat from Brazil currently. The species represents by far the most desirable member of the family. The fish becomes approximately 30 cm long and thus should be kept in larger tanks. In contrast to most other banjo catfishes – which usually do not move if possible – this species is comparetively lively.

Platystacus cotylephorus inhabits the lower reaches of rivers and even tolerates brackish water. It can be kept, however, also in pure freshwater, but the pH should be neutral or slightly alcalic in that case and the water should be medium hard, not soft.

Basically speaking the species is very peaceful, although very small tank inhabitants may be eaten. The banjo cats accept readily any type of frozen food, most do even feed on granulated dry food; Tubifex are regarded as an delicatecy.
One of the characteristic features of the species is the fact that there do not exist even two specimens with exactly the same coloration. There are no differences between the sexes known for sure, but it is said that females have a rather brown basic coloration while males have a black one. In our fish quite different shapes of the dorsal fin can also be observed which possibly proof to be a way for sexing the fish.

Although the species has not been bred successfully in aquaria so far it is known that the female attaches the eggs on the underside of its belly until they hatch. This is an unique case of broodcare in fishes. 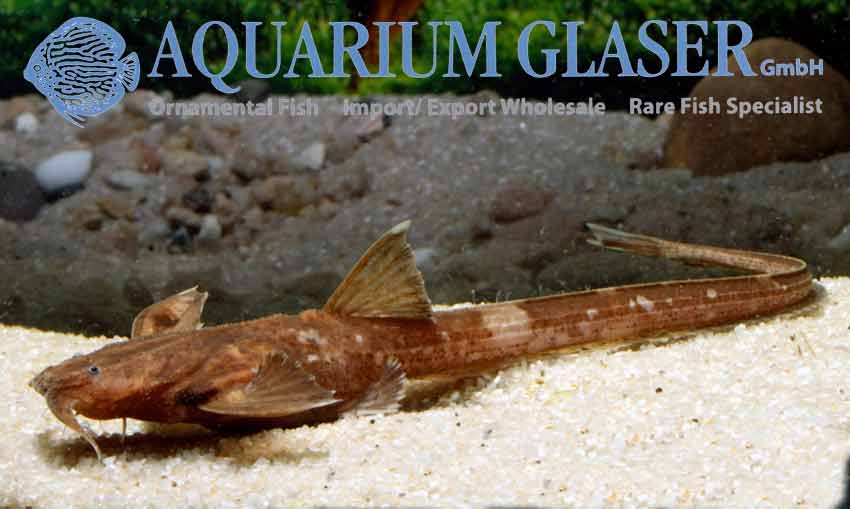 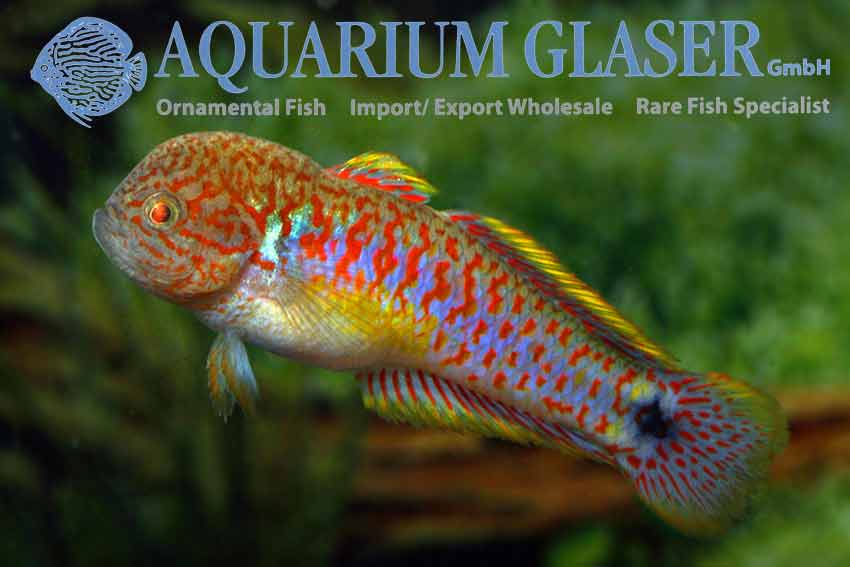 The pretty halfbeaks of the genus Nomorhamphus reach us usually as wild collected fish from Indonesia. They originate from the island of Sulawesi (formerly: Celebes) where they inhabit preferably running waters. They like to feed very much on insects from the water surface, but they also take readily dried or frozen food. Males become usually 6-8 cm long, females become larger and can reach up to 10 cm. These fishes are livebearers. They do not require any special water.

Against conspecifics the males can be quarrelsome. One should either keep a good number of males (5 or more) or only one male per tank. Two or three males together do usually not good.

We most often receive these fishes as a mix composed of at least two species. This time the import contained Nomorhamphus liemi and N. ebrardtii. Both species can be told easily apart on the basis of the coloration. In N. liemi the males develop a fleshy hook on the tip of the lower beak. The size of this hook – in combination of the intensity of the coloration of the fins – shows which position in the hierarchy the particular male has. The big boss has the fattest hook, animals with a low rank have no hook at all and almost plain white fins. Females also have no hook. They can be easily recognized by the shape of the anal fin, which is a simple, normal fin in females, whereas in males this fin is modified into a complicated sexual organ, called andropodium. 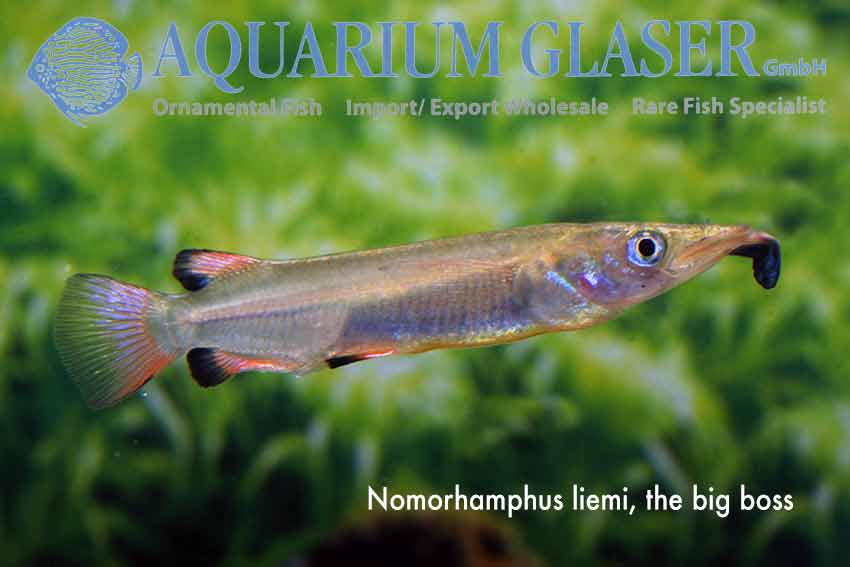 We can offer only very rarely wild collected fishes from the USA. But currently we have some species of minnow in stock, among them the very pretty Chrosomus erythrogaster. These fish do not need a heater, but feel also very comfortable at temperatures over 24°C. Maximum size for that species is 10-12 cm, currently the fish are 5-7 cm long. 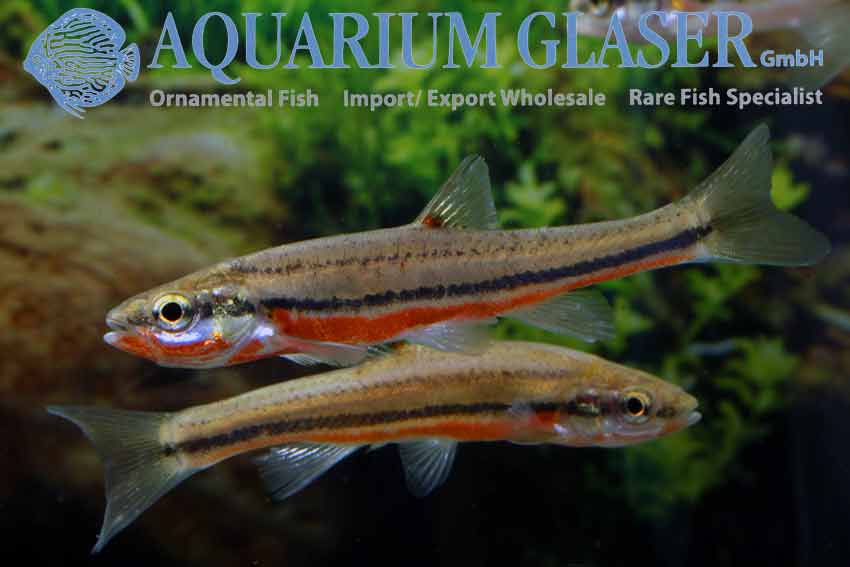 The needle suckers of the genus Farlowella are quite specious. To date 27 species are recognized as valid. As many species look very similar to each other the exact determination often proofs to be quite difficult. The 27th species has been described very recently from Colombia (it is the species Farlowella yarigui which has not been imported alive so far). The scientific description of that species is accompanied by a key to identify the 12 species of Farlowella known so far from Colombia. According to that key the most often imported species of Farlowella in the hobby is in fact Farlowella vittata. We currently have a good number of very healthy animals in stock. However, it will take without any doubt quite a long time until the correct name for that fish will be commonly used in the trade. Until now the Farlowella from Colombia has usually been called F. acus. F. acus really occurs in Colombia and is also very similar to F. vittata, but there is one easily recognizable difference between the two species: in F. acus the males develop breeding odontodes (a “beard”) on the snout which is missing in ripe males of F. vittata.

Keepig and even breeding of Farlowella vittata in the aquarium is not difficult. The perfect tank for Farlowella has a fine layer of algae growing on all sides of the tank except the front glass. These algae serve as basic food for the fish. But Farlowella also feed readily on all usual types of dried and frozen fishfood. One must only take care that the needle suckers get enough food, for they are very slow feeders. Plantation of the tank should preferably be composed of plants with broad leaves. F. vittata likes higher temperatures, so the water temperature should be between 26 and 30°C. Hardness and pH are of no meaning for the fish as long as extremes are avoided. 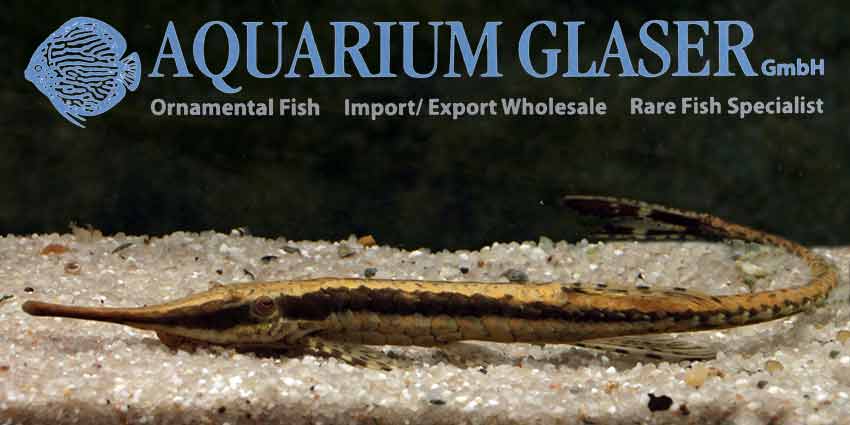