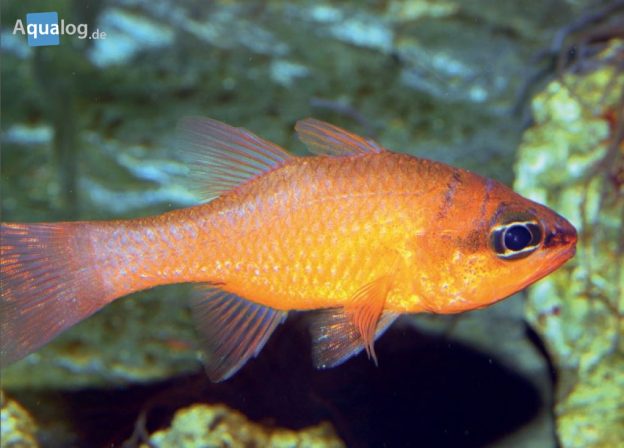 Cardinalfishes can be termed ideal fishes for the marine aquarium. They are brightly colored, exhibit interesting behavior, remain manageably small, don’t tend to be susceptible to disease, ignore sessile invertebrates, and are essentially energy-saving fishes as they require little light. Who could ask for anything more?

Marine and freshwater aquarists are often very committed to their particular branch of the aquarium hobby. Marine aquarists don’t usually maintain any freshwater aquaria, and vice versa. At the same time very many freshwater aquarists continue to subscribe to the argument that marine fishes cannot be bred in private aquaria, or at least only at great expense and effort. And for these people breeding is the crowning achievement of keeping fishes. Cardinalfishes are thus ideally suited as beginner’s fishes, as at least one species, Pterapogon kauderni, is no more difficult to breed than an easy-to-breed freshwater fish and in addition it is always easy to find homes for the young.

Cardinalfishes constitute a family – scientifically known as the Apogonidae – within the perciform fishes. At present almost 350 different species are recognized, divided among 33 genera. The largest species of cardinalfish grows to around 20 cm long, but the vast majority remain below 10 cm in total length. For this reason alone the majority of species are well-suited to long-term maintenance in the aquarium.

Almost all cardinalfishes live in the sea; only one genus, Glossamia, with 11 species, restricted overall to New Guinea and Australia, lives exclusively in fresh water. There are also a small number of euryhaline species, that is fishes that can live both in the sea and in fresh water; one of them, namely Apogon amboinensis, is occasionally, albeit very rarely, imported as an aquarium fish for freshwater aquaria. 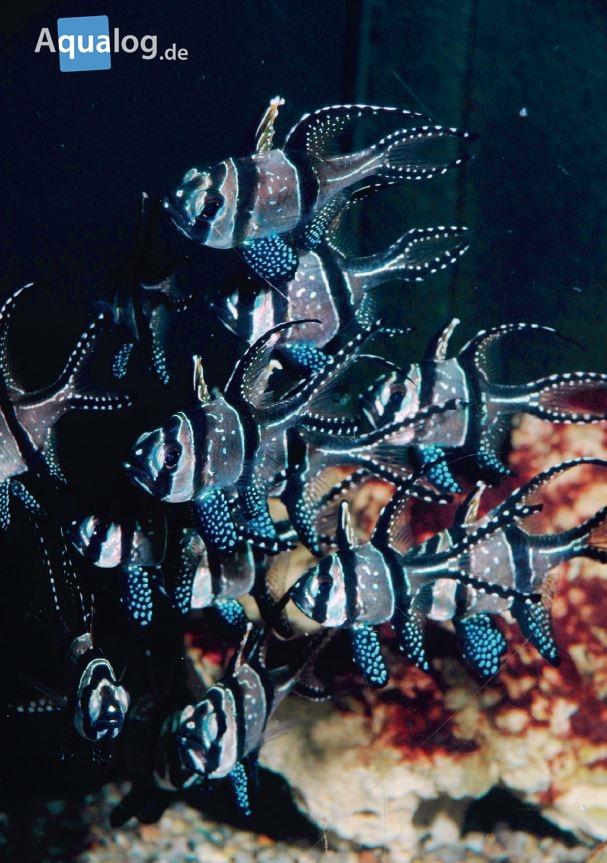 The cardinalfishes received their popular name from the only species originally native to the Mediterranean, the Cardinalfish or King of the Mullets, Apogon imberbis. Its red attire was apparently thought very reminiscent of the robes of the church dignitaries. The second popular name of this species comes from the legend that this fish ruled over the Red Mullet (Mullus barbatulus), one of the most prized food fishes among the ancient Romans. Even the scientific genus name reflects this legend, as ”Apogon” means ”without barbels” – in comparison to the mullets with their two flexible barbels on the chin.

Cardinalfishes occur in all the warm seas of the Earth. Originally the only species living in the Mediterranean was the above-mentioned A. imberbis, but in the interim a whole series of species have migrated from the Red Sea into the Mediterranean via the Suez Canal, the so-called Lessepsian migrants (after the engineer Lesseps, under whose direction the Suez Canal was opened in 1869) Apogon queketti, A. smithi, Apogonichthyoides nigripinnis, A. pharaonis, A. taeniatus, and Ostorhinchus fasciatus. The influence of these newcomers – the technical term is neozoa – on the indigenous fauna of the Mediterranean remains unknown, although the Pharaoh Cardinalfish (Apogonichthyoides pharaonis) is a direct competitor for habitat with Apogon imberbis and populations of A. pharaonis are constantly growing (Oral, 2010). But the King of the Mullets is still considered a common species and not endangered, and it remains to be seen how well A. pharaonis can adapt to the low temperatures in the western Mediterranean. At present its occurrence is restricted to the eastern Mediterranean.

It is known that many cardinalfish species live in close association with other creatures. Thus some species live among the long venomous spines of sea urchins of the genus Diadema. The Banggai Cardinalfish (Pterapogon kauderni), already mentioned above, is particularly well known for this association, but the species most highly specialized on this partner is undoubtedly Ostorhinchus chrysotaenia; this cardinalfish has even been observed to clean the sea urchin. So the relationship is probably a true symbiosis offering reciprocal benefits, while the use of sea urchins by other cardinalfishes, without the sea urchin gaining anything, is termed commensalism.

There are cardinalfishes (Astrapogon stellatus) in the Caribbean that live inside the mantle cavity of giant snails of the species Lobatus gigas (formerly Strombus gigas). A closely-related species, Astrapogon puncticulatus, lives in the shells of dead snails, similar to the behavior known from some cichlids from Lake Tanganyika.
The list of the commensal associations between cardinalfishes and invertebrates is long. The Caribbean species Apogon quadrisquamatus lives with anemones like clownfishes do, albeit with cave- and crevice-dwelling species. The species of the?genus Phaeoptyx, likewise from the Caribbean, live with starfishes and gorgonians, and the Indo-Pacific species of the genus Siphamia with the venomous Crown of Thorns Starfish and sea urchins. Some species, including the frequently imported Threadfin Cardinalfish Zoramia leptacantha (formerly Apogon leptacanthus) also live among stands of coral. Only some 15 Caribbean species and around 80 Indo-Pacific species are regarded as coral fishes in the strict sense, ie species that are always or regularly associated with coral reefs. 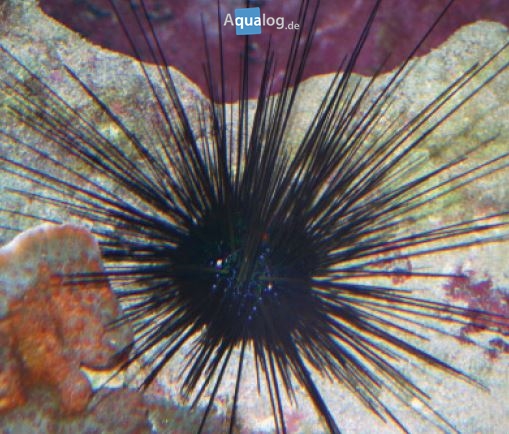 In general cardinalfishes can be described as fishes that prefer to spend the day in caves or other shelter. Only at twilight do they venture further away from their hiding-places. At the same time cardinalfishes aren’t very specialized. The two species of the genus Sphaeramia, namely the Pajama Cardinalfish S. nematoptera and the Orbiculate Cardinalfish S. orbicularis, are noted for living their lives among mangroves. But these fishes also like to live in somewhat murky water, for example in harbors. The symbiosis with luminescent bacteria seen in many small cardinalfishes is an adaptation to life in dark, murky water and enables them to glow in the dark (this is termed bioluminescence). Unfortunately to the best of my knowledge these species (which belong to the genera Siphamia and Acropoma, plus species of the genera Pempheris, Parapriacanthus, Archamia, Jaydia, and Rhabdamia are capable of bioluminescence without symbiotic bacteria) haven’t yet been imported. A special aquarium with these little fishes would be a fascinating sight at night! 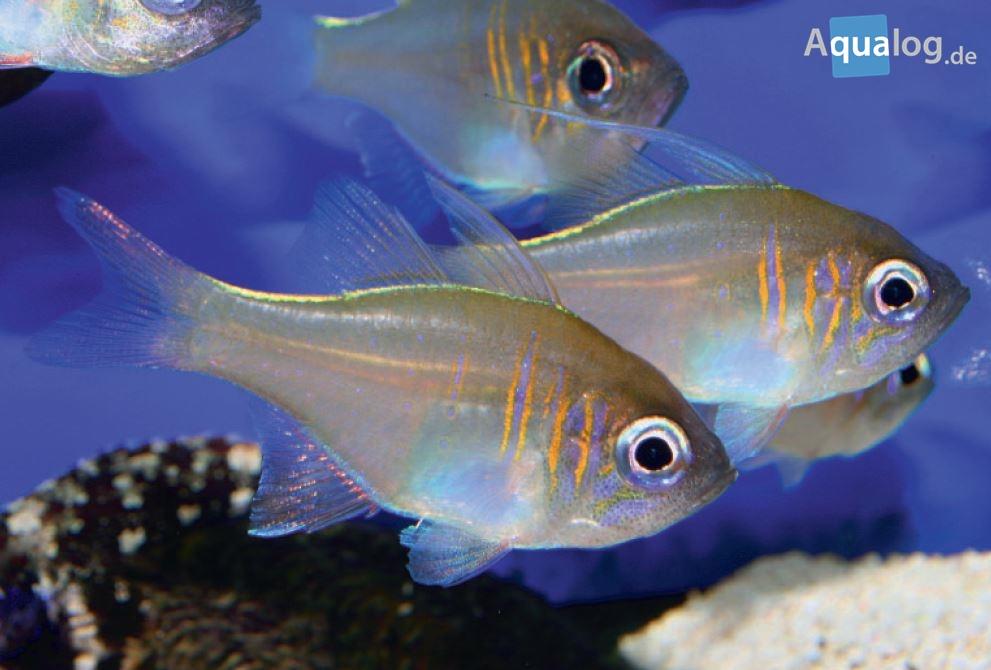 Cardinalfishes may tolerate the strong lighting in modern reef aquaria, but don’t require it at all. For this reason they can be classified without hesitation as “energy-saving fishes”, as the aquarium lighting above a cardinalfish aquarium needs only to satisfy the requirements of the owner, it’s all the same to the fishes. 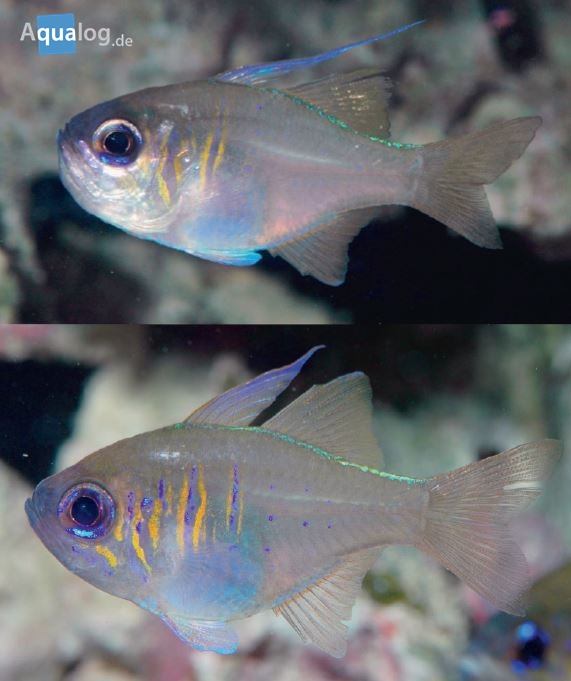 Essentially, the majority of cardinalfishes are found in large groups in the wild. The small species in particular exploit the relative safety of the shoal. Pairs form from among the groups, and retire to a shared living cave at breeding time. In the aquarium pairs of the Banggai Cardinalfish, for example, may remain together for many years and become ever more compatible in their breeding behavior.
In the aquarium it can also often be observed that after spawning females remain in the vicinity of brooding males. In the wild such observations are only very rarely possible for obvious reasons. In Apogon notatus at least the female remains in the living cave after spawning, while the brooding male often leaves to join a shoal of conspecifics. The female then entices another random male into the cave (he may even be a brooding male) and spawns with this new mate as soon as the opportunity arises. So marital fidelity appears to be more aquarium artifact than typical behavior – at least in cardinalfishes. 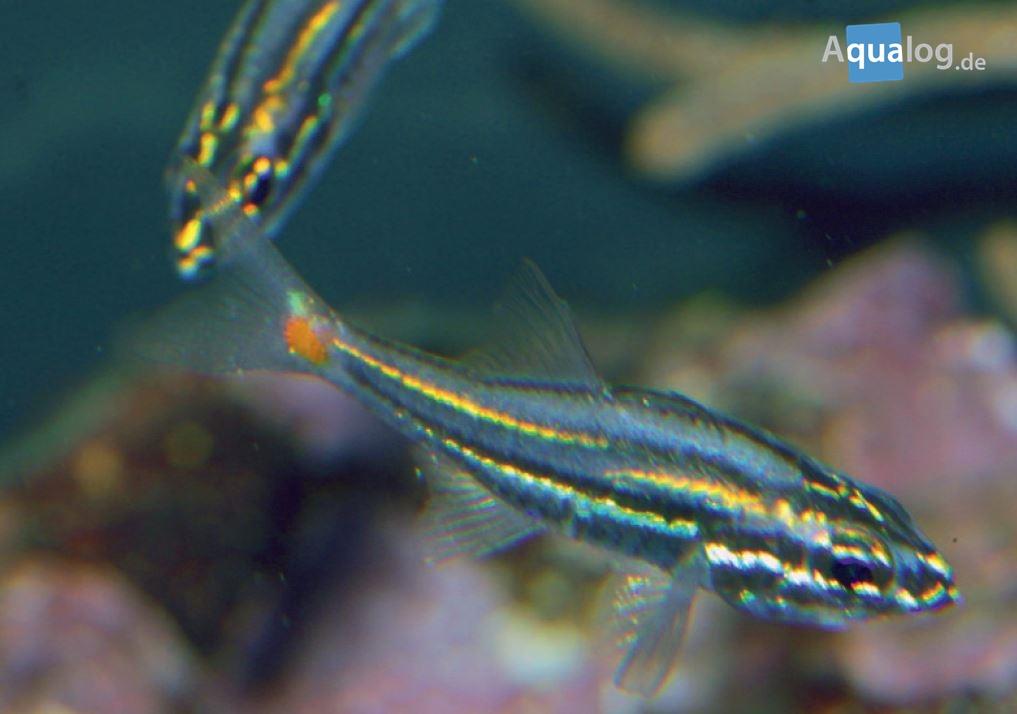 As far as is known to date all cardinalfishes are paternal mouthbrooders, but obviously only a very small percentage of the cardinalfishes in existence are actually so well known that any definite statements can be made about their reproductive behavior. Even such interesting details as the question of how fertilization of the egg-ball takes place in the mouth of the male have been only inadequately studied to date. Intensive observations of the spawning behavior of the King of the Mullets in the Monaco Aquarium by J. Garnaud in the 1960s were interpreted as suggesting internal fertilization, as female Cardinalfishes lay their eggs at a stroke in large balls, and the males then pick up these balls within a few seconds without any act of fertilization being observed. But a more probable explanation is that the male doesn’t release sperm until after he has picked up the eggs and that the striking, excited way in which the female swims around the male after he has picked up the eggs serves to enrich the water he breathes with sperm such that fertilization of the eggs can take place in his mouth (Kuwamura, 1983). Even though the hypothesis of internal fertilization in the King of the Mullets can still be found in the latest literature and is portrayed as fact, recent research instead indicates that the theory is untenable (Petersen et al. 2005), not least because male cardinalfishes lack any anatomical structures that might make such internal fertilization possible. 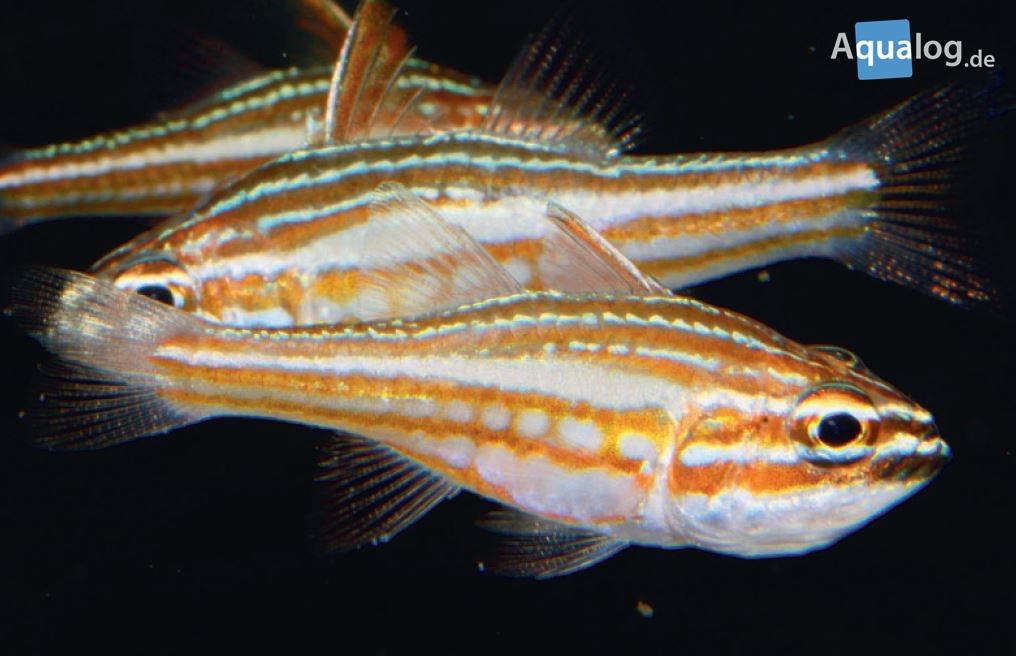 Cardinalfishes are in general very common, and are not only widely distributed but also found at high population densities. At the same time they have highly variable strategies as regards numbers of offspring. The only 7-9 cm long Apogon notatus, for example, lays egg-balls containing several thousand eggs, while at the other extreme Pterapogon kauderni, the Banggai Cardinalfish, produces only some 24 fry per spawning on average and 170 young per year (Mai, 2004). 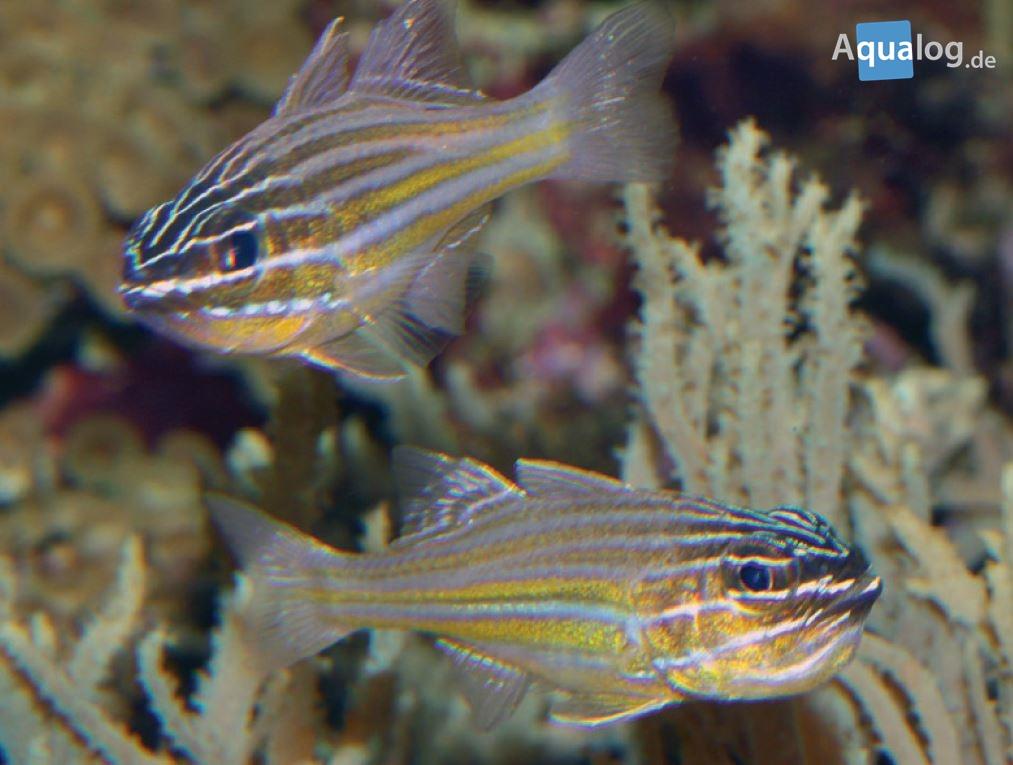 In some species, for example Sphaeramia orbicularis, a link has been established between reproductive behavior and the phases of the moon in the wild, but not in others. The brooding period varies from eight days (at 27-30 °C) in Sphaeramia orbicularis to up to 28 days in Pterapogon kauderni. 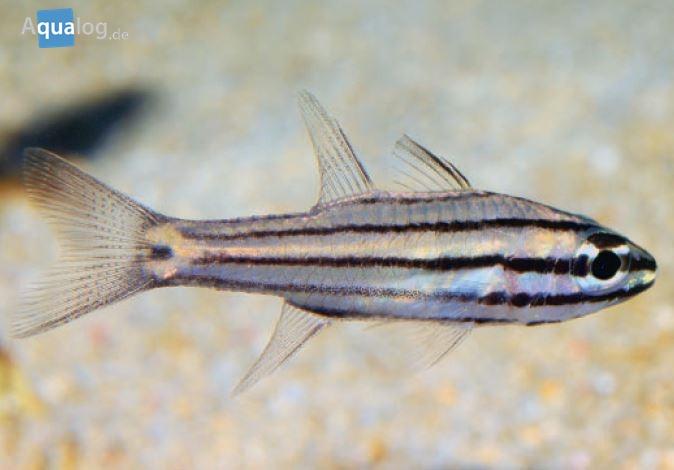 When we consider that there are actually very many species of cardinalfishes and each of them probably has its own special characteristics, then there is obviously a wide field of activity available to experimentally-minded aquarists with breeding ambitions. 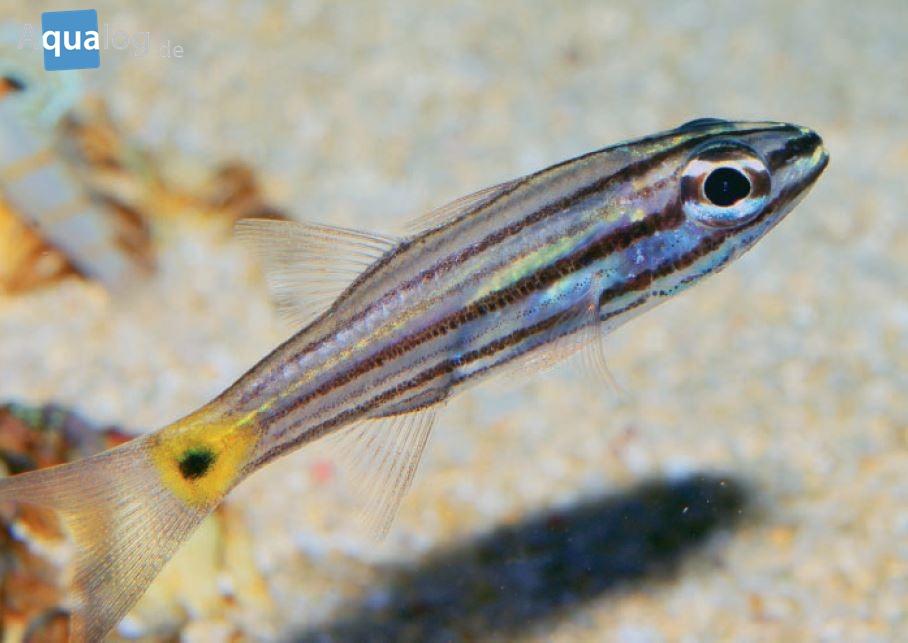 Cardinalfishes can without reservation be described as suitable beginners’ fishes for marine aquarists. They don’t pose any especially high demands as regards water quality and are not particularly susceptible to disease. Almost all cardinalfishes prefer to feed on small crustaceans and can be fed without problem on frozen foods (Mysis, Gammarus, Artemia, etc). Obviously cardinalfishes will also eat small fishes and shrimps that will fit into their mouths, and so care is regarded in the selection of tankmates. But corals, anemones, and all other sessile invertebrates plus echinoderms (starfishes, sea urchins, etc) have nothing to fear from cardinalfishes.
It is best to buy a group of 8-12 specimens right from the start. As with many other perciforms, intraspecific aggression is appreciably less in large groups than if only a few specimens are kept. 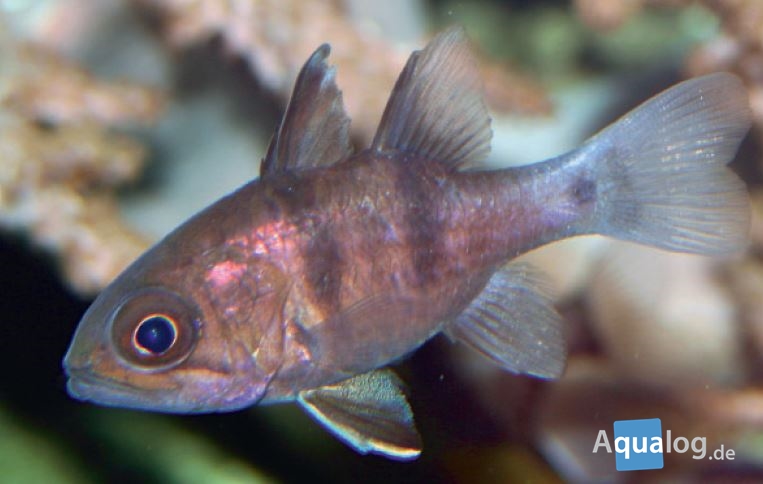 Naturally it is essential to have individuals of both sexes for successful breeding. There are, however, only relatively few reliable sex differences in cardinalfishes. As a rule males have a larger head and a larger mouth and are also somewhat larger overall than females. In the case of the Banggai Cardinalfish the form of the genital papilla has also been described as a sex difference (Mai, 2004).
It is, however, very unlikely that you won’t get both sexes if you buy 10 individuals. Pairs that form naturally from a group are also more likely to breed reliably than pairs put together arbitrarily, or at least that is what breeders of the Banggai Cardinalfish say.

Natural life expectancy is usually linked to size in cardinalfishes. The smallest species live less than a year, the King of the Mullets around five years. But fundamentally fishes live a lot longer in the aquarium than in the wild. The Banggai Cardinalfish has still been breeding at the age of five years (Mai, 2004).
All in all, cardinalfishes are ideal aquarium fishes for marine aquarists and anyone who aspires to become one. There is still much to discover and study about them, and aquarists have an important role to play in this. That includes you! 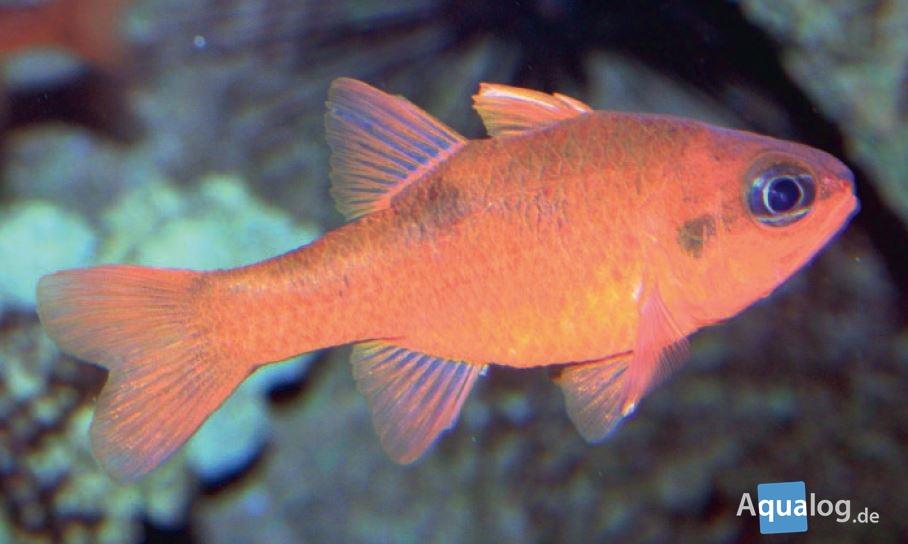