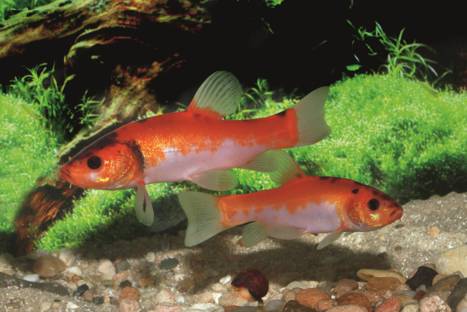 Here in Europe a fish species that is completely and totally unique lives right on the doorstep: the Tench, Tinca tinca. Normally this around 40 cm long fish is best known from the delicatessen. Most anglers will probably already have made the acquaintance of this fish. But only a few people know that the Tench is a splendid and very interesting fish for the Aquarium and garden pond.

Our native European fishes include only a few species as easily satisfied as the Tench.It can both hibernate in winter and aestivate in summer, and hence is able to inhabit small bodies of water. Often it is the only fish species in such pools, as it also tolerates very low oxygen concentrations. The Tench is native to all of Europe with the exception of a very small number of regions (Greece, Dalmatia, the Medi – terranean islands, and Scotland), as well as large parts of western Asia (it is absent only from the Crimea). There is only theone species of tench (Tinca tinca), and at present no subspecies are accepted. In fact the Tench is so unique in its characteristics that it is currently regarded as the only member of its own subfamily, the Tincinae, within the carp family (Cyprinidae). 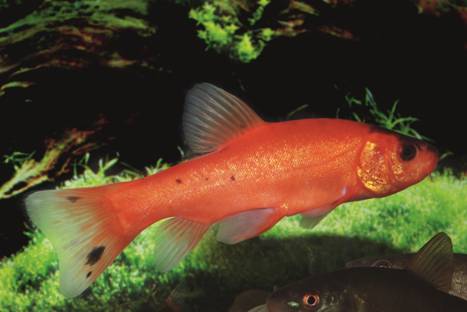 Basic requirements of the Tench

The Tench is ecologically very adaptable and even tolerates brackish water, for which reason it is even found in the starker ausgesüßten parts of the Baltic, as well as in river estuaries. The most important elements for the Tench are a soft substrate, the presence of submerse plants, and the existence of small snails and bivalves, which are its preferred foods. The relatively short gut of the fish indicates that it can process plant material only inadequately, so while this type of food may form part of the natural dietary spectrum, a vegetarian lifestyle is impossible for the Tench. Aquatic insects and their larvae, small crustaceans, etc form the main food ofthe Tench. The optimum temperature for the Tench lies between 12 and 26 °C. At temperatures above 28°C feeding stops, they don’t like it that hot and at still higher temperatures go into a form of aestivation to survive. Food intake also ceases in winter and the cold part of the year is spent in hibernation. From this it can readily be seen that the Tench prefers to live in still and slowflowing waters. Hence the garden pond and the aquarium suit it very well as alternative habitats.

The Tench in European culture

The flesh of the Tench has been valued very differently at different times. The Romans rather despised it and AUSONIUS wrote that the Tench was fit only as food for the common people. The popular names given to the fish in some parts of its orange also demonstrate its low value: in some parts of eastern and northern Europe it is known as the shoemaker. The fish is known simply as the Schleie throughout the entire German-speaking area (with slight local differences in pronunciation such as Schleih or Schleich), which derives from the proto-German word for slippery (slipan) and refers to the thick layer of mucus on the skin with the tiny scales so typical of the Tench. In France (Tanche), in England (Tench), in Italy (Tenca), and Spain (Tinca), by contrast, variations on the Latin name Tinca have been adopted. The extraordinarily thick layer of mucus on this fish has also given rise to all sorts of forsuperstitions in folklore. The most widespread is the idea that the Tench is the “fish doctor”, against whose healing layer of mucus all injured fishes rub themselves. Accordingly the predatory Pike and Perch do not eat the Tench, as they are grateful for the service it offers as healer. But this is, of course, just as much nonsense as the myth that binding a Tench to the belly drives away jaundice, alive to the forehead headaches, to the back of the neck eye inflammation, and to the soles of the feet plague and fever. 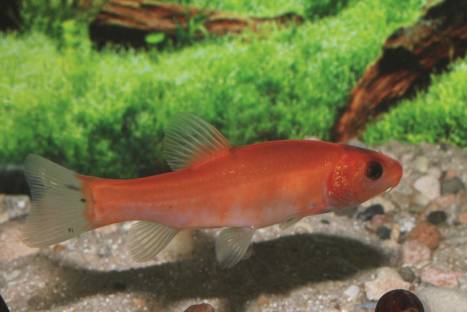 The Tench becomes sexually mature in its third year of life, when it is normally around 20-30 cm long. If there are very large numbers of Tench in the water and no predators, then stunting occurs. The fishes then don’t exceed a total length of 10-15 cm and also become sexually mature at this small size. Essentially, sexual maturity in fishes is not a matter of size but of age, and Tench are no exception. Tench usually grow to around 40 cm long, but there are rare record measurements of 70 cm (and a weight of 7.5 kg). Males and female are easy to tell apart in the Tench. The males have appreciably larger ventral fins than the females. In summer, when the wheat is in flower (May – July), the Tench spawns on submerse vegetation. The eggs are very small and numerous (300,000 – 600,000 per female). Usually several males drive a single female. Tench do not practice any brood care. 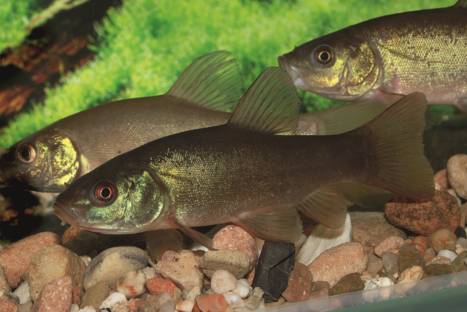 Tench are very good for combating snails, both in the coldwater aquarium and in the garden pond, when the mollusk population needs to be kept under control.

Tench in the aquarium

Tench are wonderful aquarium fishes that can be kept successfully even by beginners. Because these fishes can also attain 15-20 cm in the aquarium, the tank should be of an appropriate size. Tench are totally undemanding as far as waterchemistry is concerned. They should, however, be provided with a soft sandy substrate in which to dig, and plenty of hiding-places. Tench are crepuscular fishes, and so the tank shouldn’t be too brightly lit. They can be fed with all the usual live, frozen, and dried foods, and mussel flesh should be included in the diet. Obviously there is no need to heat the aquarium. Tench are completely peaceful towards other fishes,be they conspecific or members of other species. There have so far been no reports of breeding Tench in the aquarium, but probably nobody has made any serious attempt. Because Tench can be sexually mature at only 10-15 cm long, aquarium breeding should be quite possible. Cold (4- 8°C), dark over-wintering is, however, a prerequisite for any breeding attempt, as with all fishes from temperate latitudes. 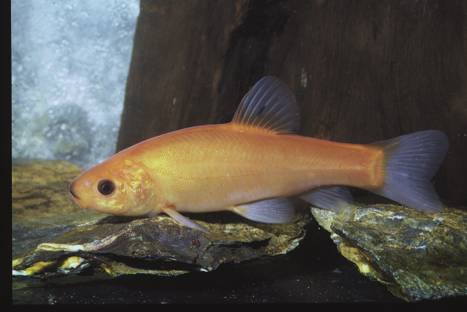