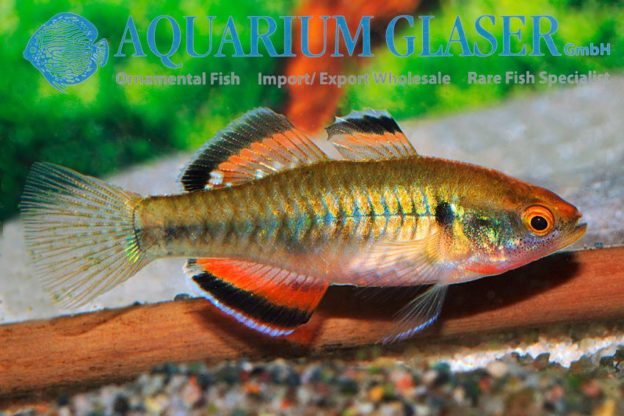 As each month we present the most popular fish imports sponsored by Aquarium Glaser!

The dwarfish catfishes of the genus Otocinclus are usually kept due to their algae-eating activities and their nice behaviour. The coloration of most of the species is only rather dull. Otocinclus are very famous for cleaning especially the waterplants without hurting them.
Could it be that there exists a species that is not only very useful, but also beautiful? Yes, there is! Otocinclus cocama, the zebra otocinclus, has both: all the positive aspects of its congeneers and a very attractive pattern. Regarding care, the up to 4 cm long fish is as undemanding as all other Otocinclus. Another unique aspect in O. cocama is the fact that all specimens have an individual pattern.
Males become larger than the females and when spotted from top the females are much more heavily built. Otocinclus spawn in the same way as Corydoras do, eg they scatter the eggs on the environment or the glasses of the tank, most often at the place where the filtered water flows back in the tank. Otocinclus do not take care for their brood. 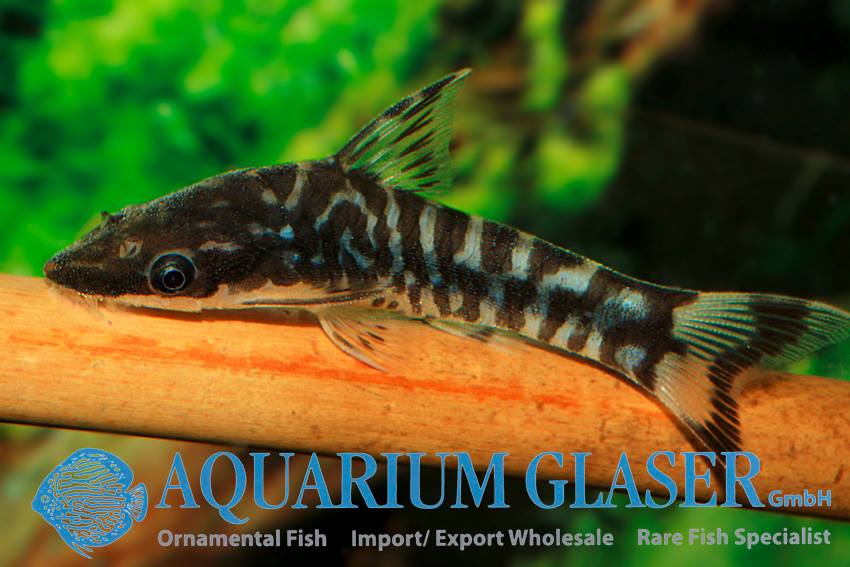 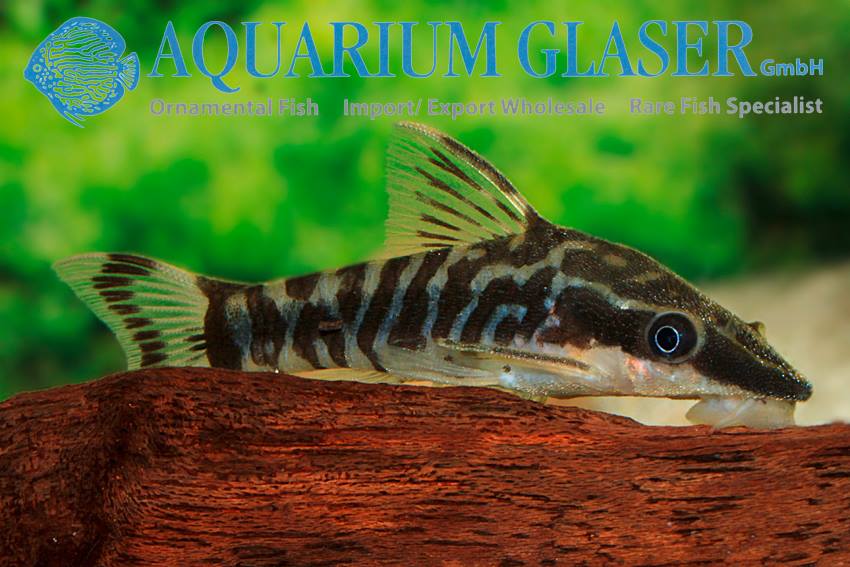 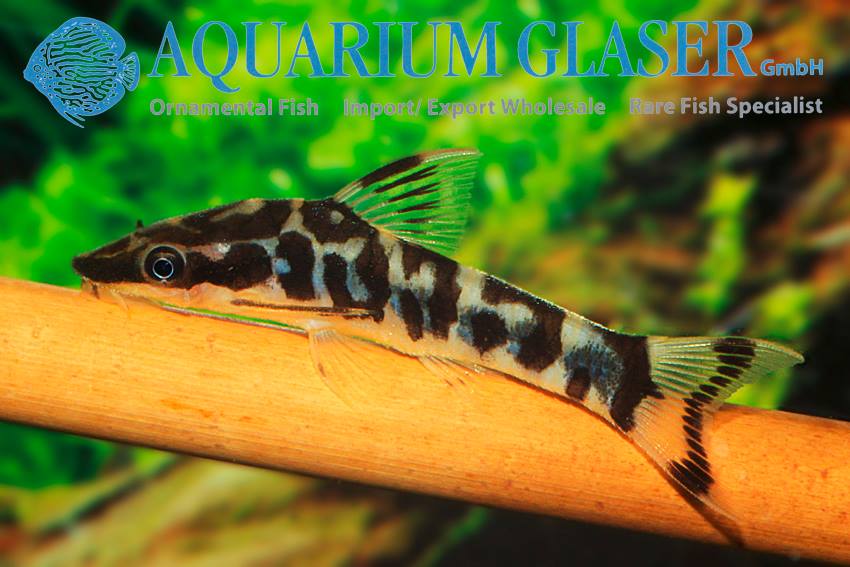 Sometimes it happens that even we run short in finding superlatives: in any case this #fish deserves to create one! It is so beautiful…. H. compressa is a sleeper goby that lives free swimming in the water column. In contrast to many other gobies this fish is not a bottom dweller. In Germany the genus Hypseleotris is called “minnow goby”, for the fish live like schooling minnows in the open water.
Males of this goby – it occurs in the wild in northern Australia and southern New Guinea – literally switch the light on while displaying. It is highly recommended to keep several males together in one tank, so at least one is in the mood to show the fantastic colours. The females are not so deep bodied and have a rather dull coloration.
Sadly it is very difficult to breed this fish under aquarium conditions. The fish spawn readily (they are substrate brooders), but the eggs and the fry are extremely small and the offspring is able to survive only in strong brackish or marine water. Here they can be fed with live marine plankton (for example oyster larvae).
On the other hand the fish are extremely hardy and undemanding. They tolerate temperatures between 18 and 35°C and almost any water chemestry. However, medium hard water will fit best. 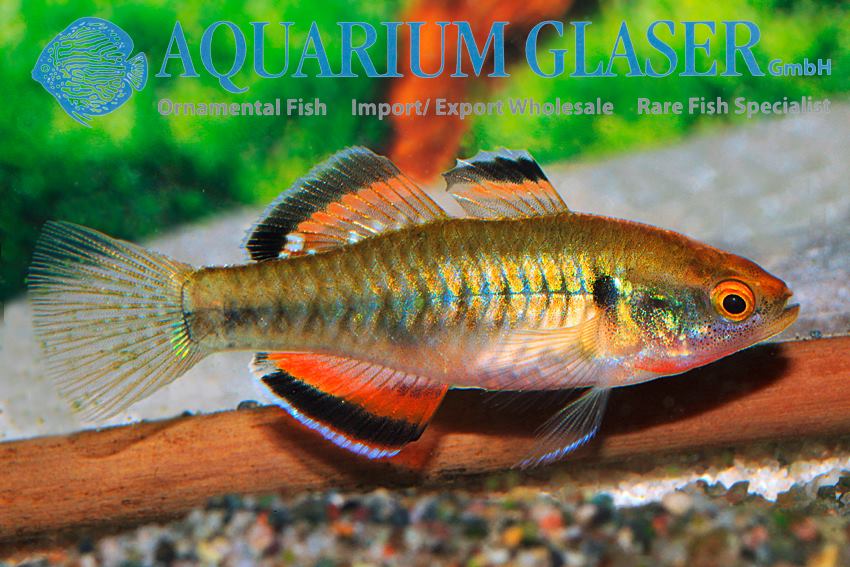 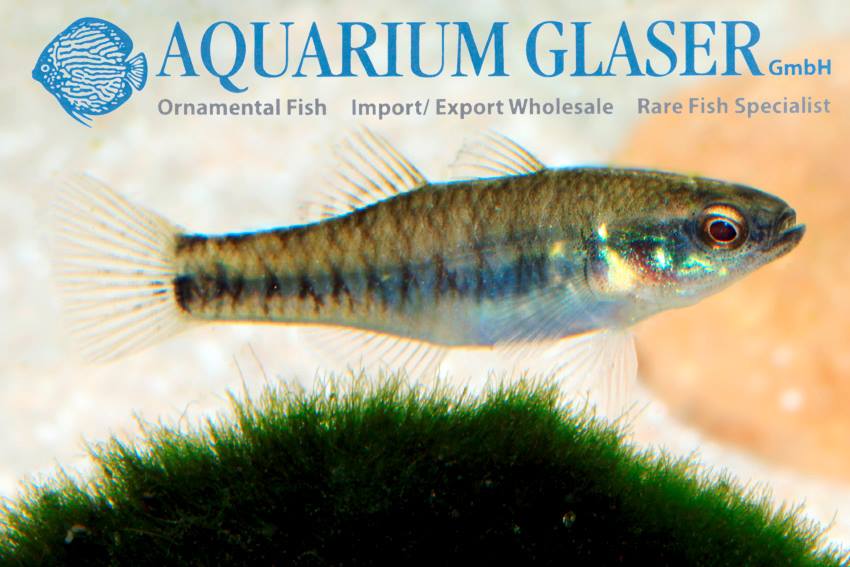 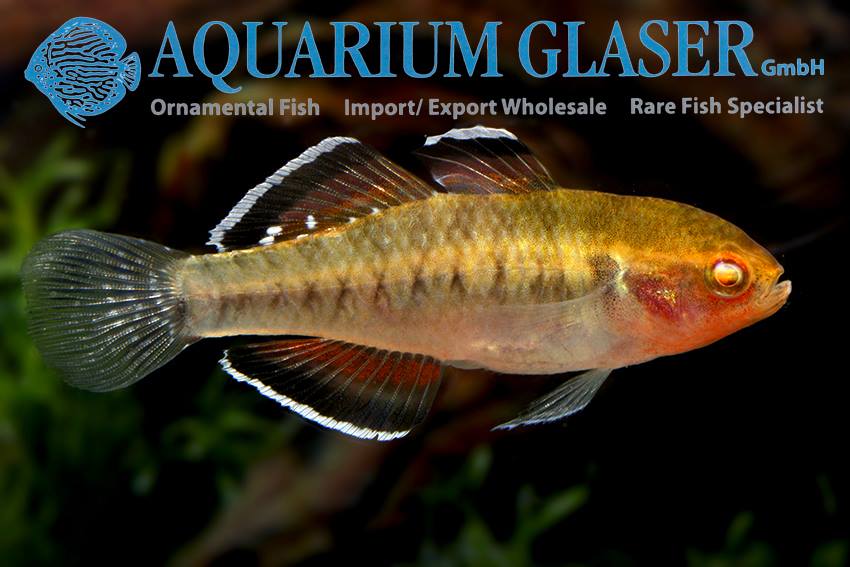 There are three species of freshwater pipefish known to occur in West Africa. They live in inland waters along the coast and have a very wide distribution. One can find these fishes from the Senegal to Angola (roughly 16°N to 18°S). The term „West Africa“ is not used here in the sense of the UN, but is meant as the whole coastal line of the continent. We obtain our freshwater pipefish from Nigeria.
From time to time we can import the largest of the three species, namely Microphis aculeatus. This pipefish becomes about 15-20 cm long. Microphis live free swimming in the water column and imitate a dead stick. Usually one can observe them in a horizontal posture. More information on the very interesting species can be found here: http://www.aquariumglaser.de/…/gorgeous_pipefish_arrived_f…/
In our current import of that species we found intermixed some bycatches of the two other known species of pipefish from West Africa. Both belong to the genus Enneacampus. This genus has been established only in 1981 and contains only these two species. In contrast to Microphis Enneacampus live more substrate orientated. Although they swim around from time to time they prefer to rest on the bottom or to crawl in caves or waterplants. The first species is Enneacampus ansorgii, a species that is already known quite well in the hobby. It is even bred from time to time. This species is quite tiny and attains a total length of about 8-14 cm. Males have been found to bear eggs with a length of 7.5 cm already. There is a comparatively large number of publications in the aquarium literature, but most of it has been written prior to 1981 under the synonym of Syngnathus pulchellus. So if one does research on the species in literature the search should include the name Syngnathus pulchellus.
We find the coloration of the second species, Enneacampus kaupi, quite spectacular. Five specimens we could pick from our Micophis import, one is bright yellow, three are brick red and one almost black. We think the these colours are due to the breeding season, because in the scientific literature E. kaupi is described as rather brown with a red belly. This species is somewhat larger than E. ansorgii, sexual activity starts at a length of 8.5-9 cm, while the largest specimen observed so far had a length of 17 cm. Both species of Enneacampus look very similar at the first glimpse, but on a closer look one can clearly see that E. kaupi has a comparatively longer snout.
Regarding keeping pipefish in aquaria: all species are quite demanding fish in respect of feeding. Without a a save source for living food it can not be recommended to try to keep them. Microphis aculeatus and Enneacampus kaupi feed readily on life bloodworm and white moskito larvae. The tiny M. ansorgii cannot swallow such large food items, they prefer small crustaceans, like Cyclops, Daphnia etc. They also accept Artemia nauplii (best: newly hatched, due to the nutrition factor). If one has to feed the pipefish regularly with brine shrimp it is best to add some salt to the water in the aquarium (a tablespoon per 10 litres of waters). This is tolerated by the pipefish and the brineshrimp stay much longer alive.

Among the most beautiful anabantoids or labyrinth fish from Africa is Ctenopoma acutirostre, the Leopard bushfish. It can become 15-20 cm long. Its natural habitat is the Congo. It is collected there for the ornamental fish trade in the Stanley Pool region. Here the fish live under the swimming meadows of the water hyacinth (Eichhornia crassipes). At dawn they start hunting. Like a dead fish they slowly thrive through the water column. The special leopard pattern suggests a rotting carrion. Small fish are attracted by the obvious easy food and find themselves eaten as soon as they try to taste it.
Regarding breeding in the aquarium the Leopard bushfish proofed to be difficult, although they are completely peaceful among each other and can be sexed easily (ripe males develope thorns behind the eyes and on the caudal peduncle which serve to fix the female during spawning). Nevertheless they only bred ocassionally by chance and never when planned.
Now the breeders in Southeast Asia were successful at least. And we can therefore offer charming little leopard babies! They already hunt like their parents and imitate a carrion when hungry. Luckily enough it is not necessary to feed live fish, neither to the young nor to the adults. They easily can be adapted to frozen food (bloodworm etc.). They also can be kept in community tanks given the fact that possible tankmates are at least as half as long the Leopard bushfish. So they cannot be swallowed anymore and become not attacked. On the other hand one has to choose calm species as tankmates, for the Leopard bushfish does not like hectic atmosphere at all! 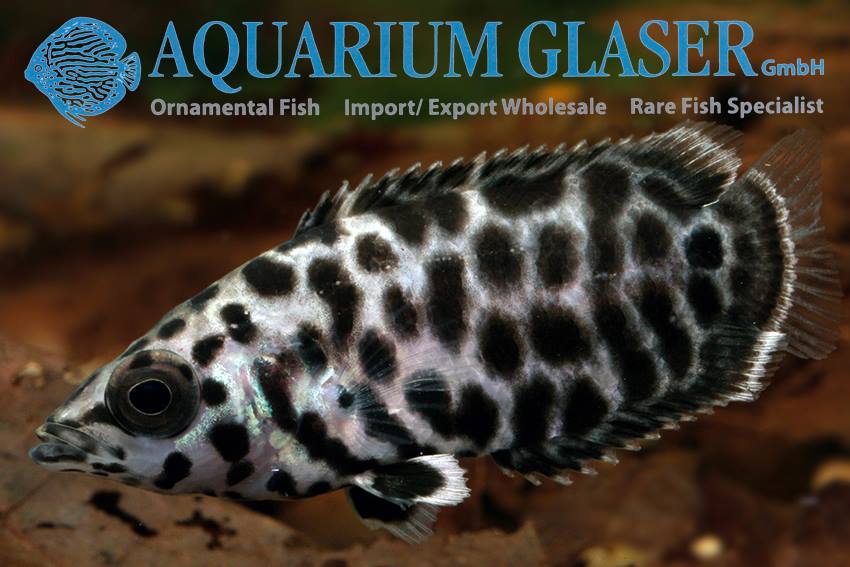 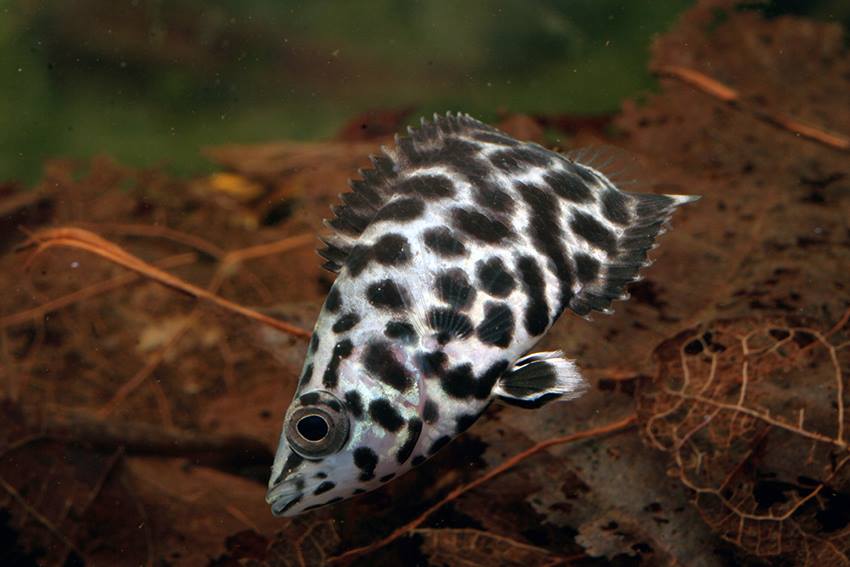 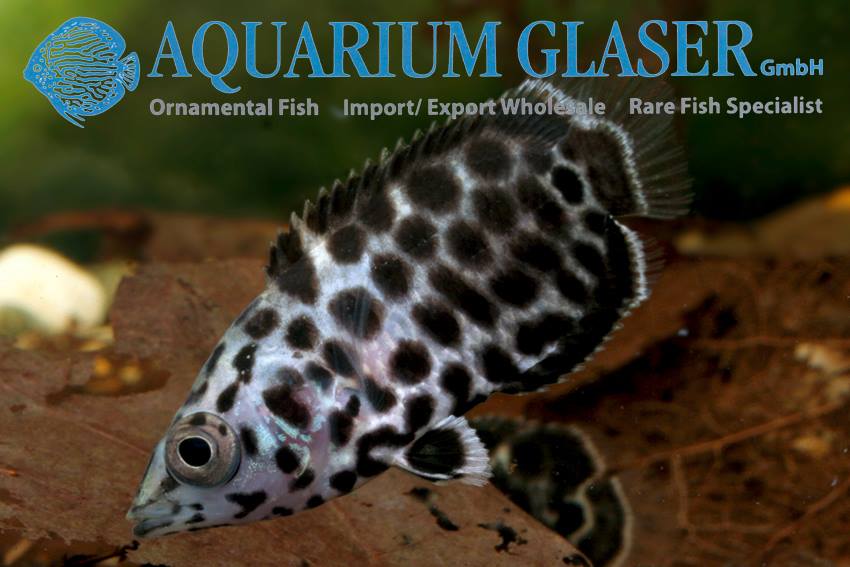 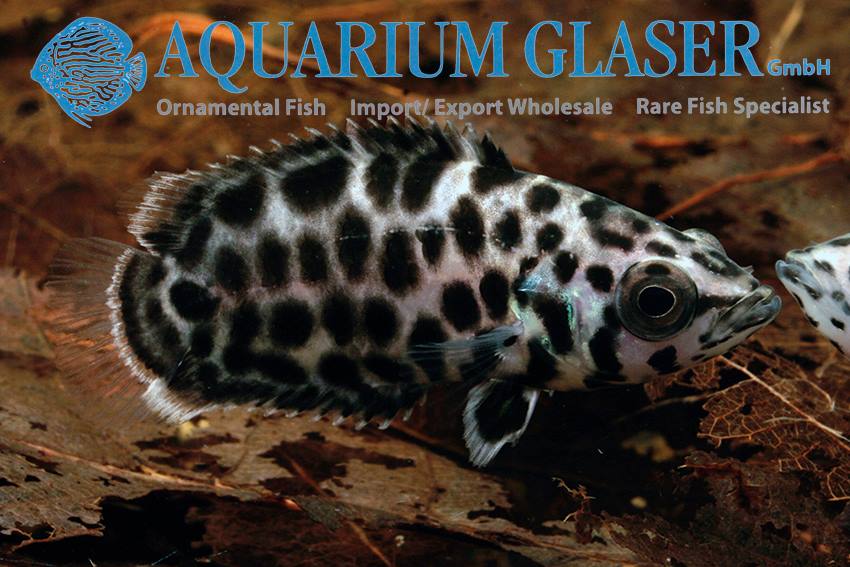 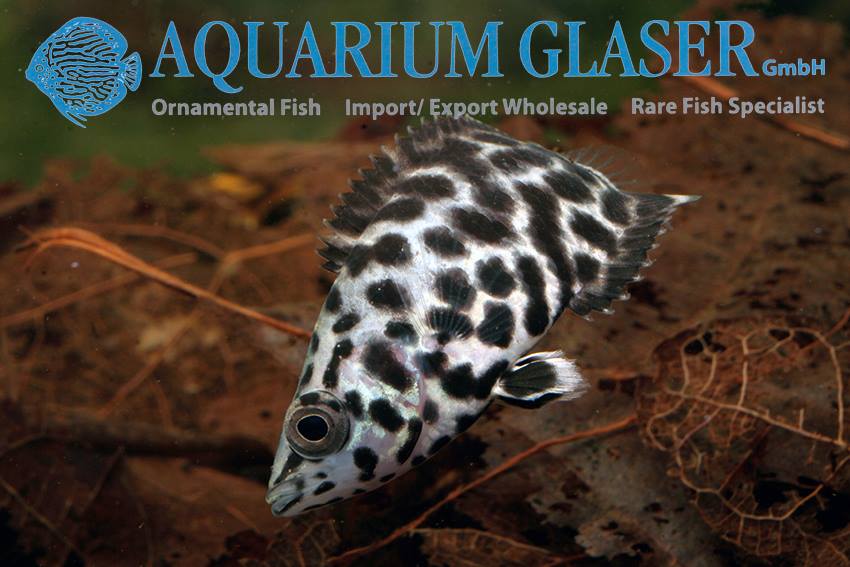 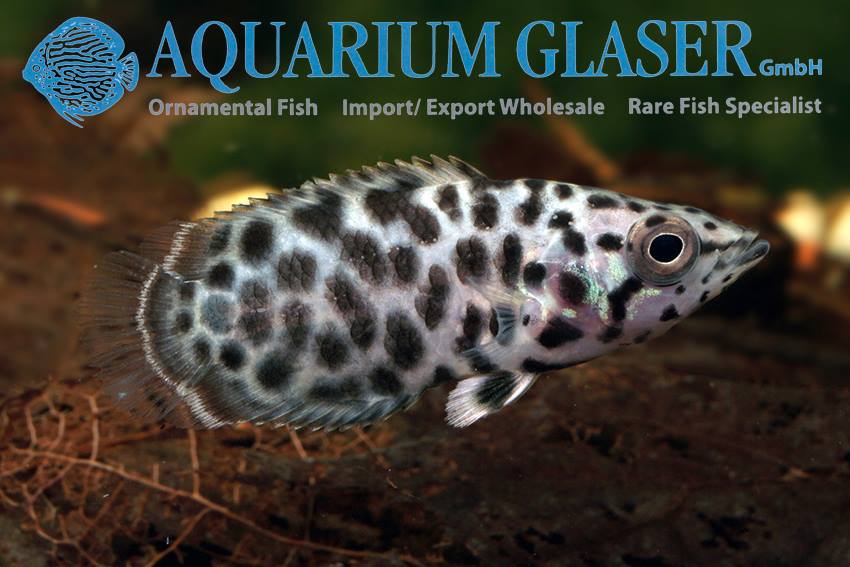 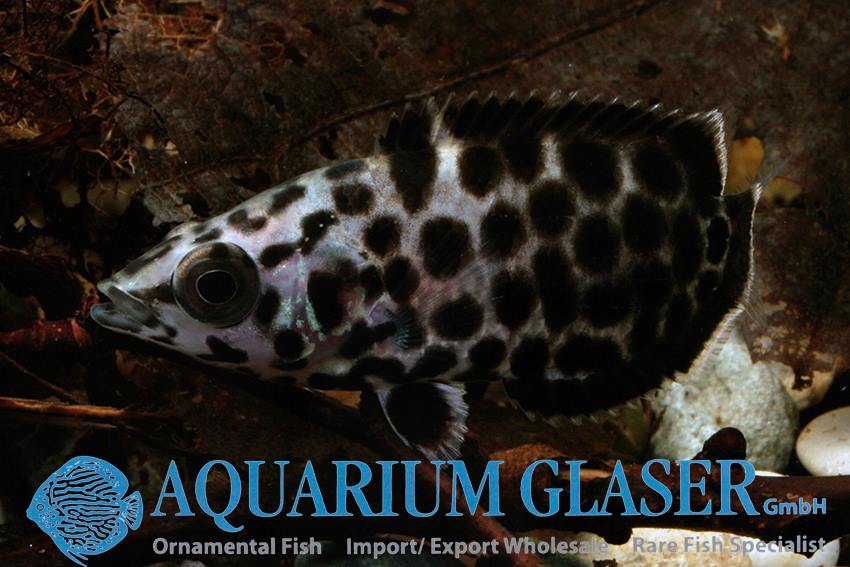 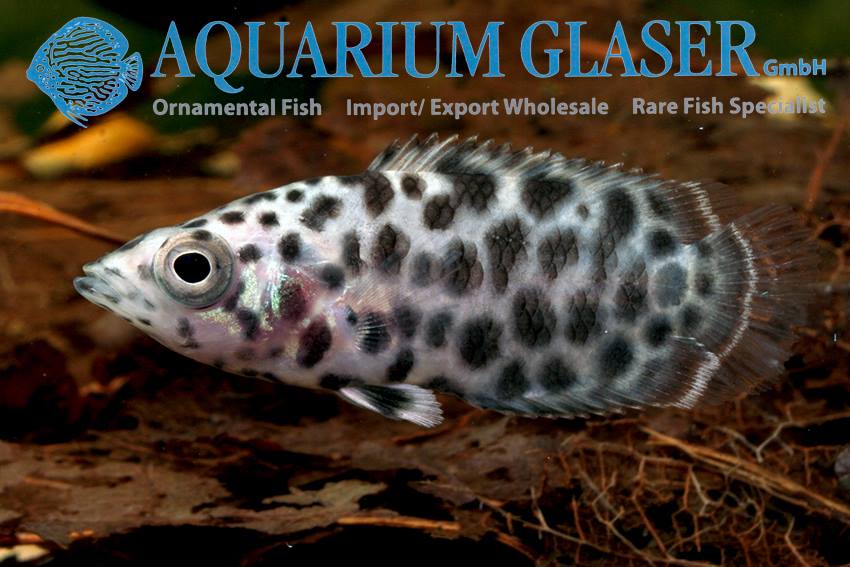