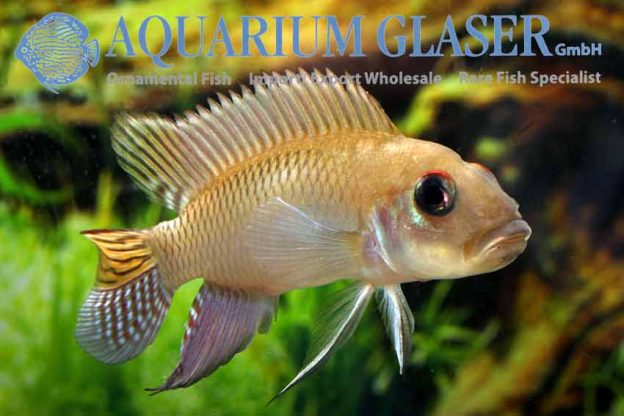 Nanochromis parilus is a species of dwarf cichlid that originates from the Congo region. Usually we offer this species as wild collected ones. But currently we found a breeder that can supply us with fully grown, very healthy, gorgeous animals.

It is quite interesting that among these bred fishes two types of males appear. Some males have a red pattern in the lower part of the caudal fin, others not. Formerly it was thought among aquarists that these differences in caudal fin pattern could be used to separate N. parilus from a closely related species, namely N. nudiceps. However, nowadays we know that N. nudiceps has an overall different look. 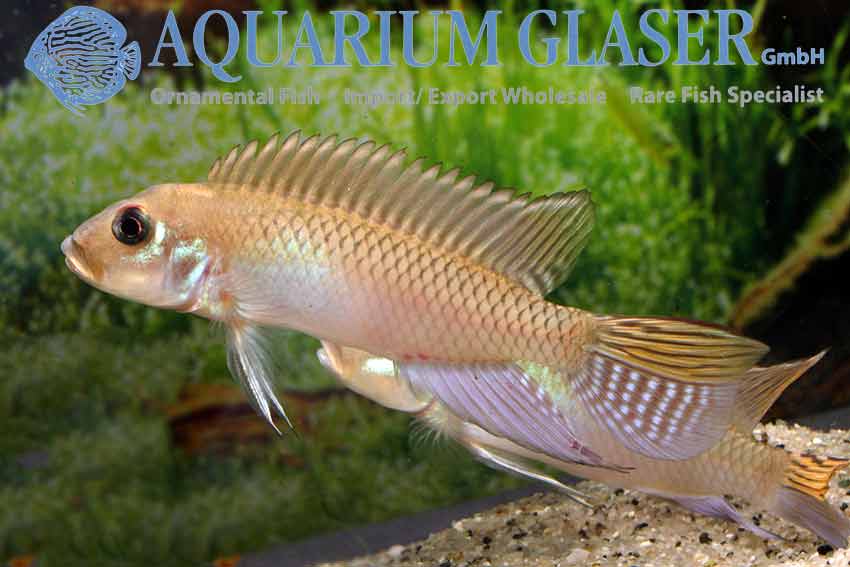 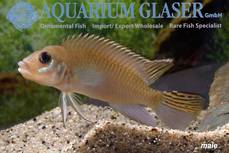 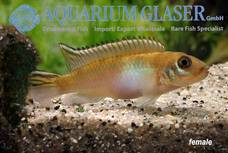 Corydoras septentrionalis is rather rare in the trade. It occurs in Venezuela and Colombia. The species is very similar to Corydoras ellisae from Paraguay. It differs from C. ellisae mainly due to the much longer snout and the colourless fin (with a spotted pattern in C. ellisae). 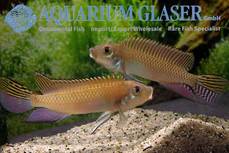 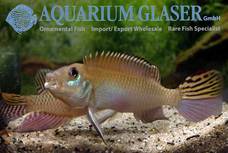 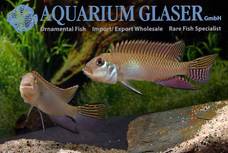 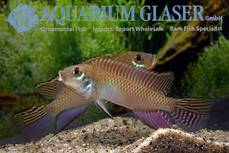 We were a bit surprised to obtain that particular species from Indonesia now. There are so many species in Corydoras… But two features are very special in C. septentrionalis. First: there is a very nice metallic green shine on the body when the light falls in the right way. And twice: we hardly ever observed a species of Corydoras so far that has such a fascinating behaviour. When the males compete with each other or when the winner of the competition courts before the female this proceeding is so fast that the eye can hardly follow. 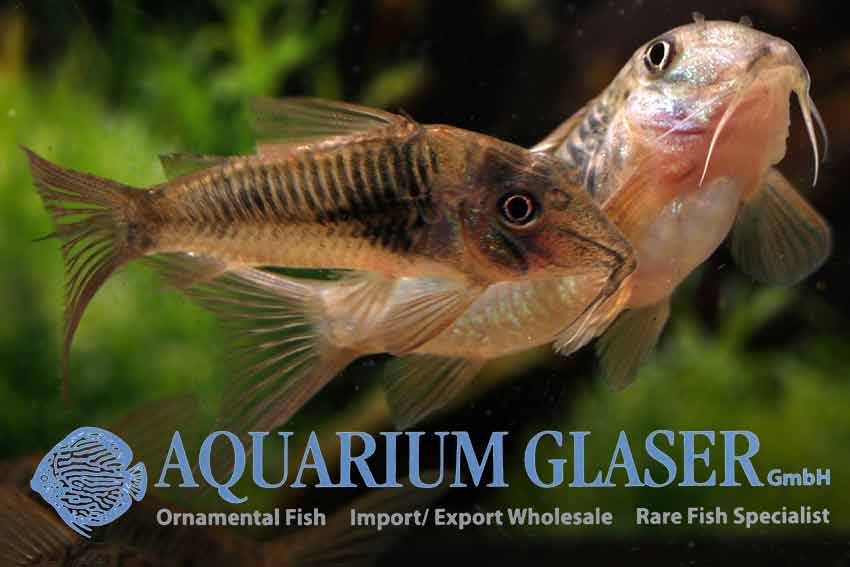 For the first time ever we were able to import this interesting dwarf suckermouth catfish. It originates from a only recently discovered region, namely the waterfalls of Cachoeira do el Dorado in the far northern parts of Brazil, almost at the border to Venezuela. This area has not been explored ichthyologically yet. Of all the different species of Paraotocinclus described so far our new importations are most similar to P. variola, a species described only this year on the basis of specimens collected near Leticia in Colombia. 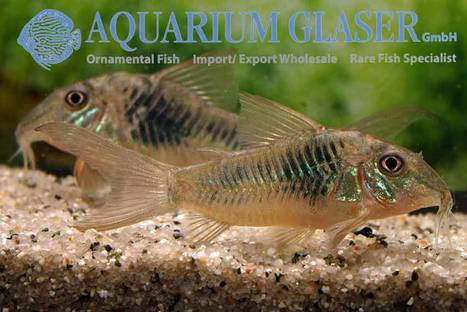 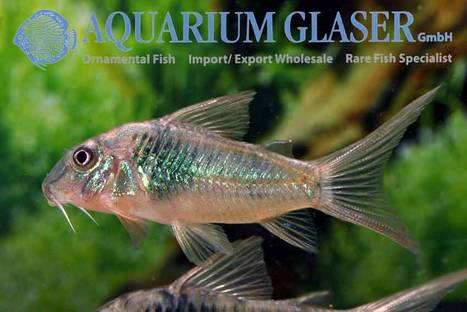 However, our fish differ from P. variola in some details. Currently we cannot say if these differences are of any importance, because our fish are very variable in respect of coloration (all specimens on the photos have the same size, eg about 3 cm total length (inclusive caudal fin)). In contrast to many other Parotocinclus of this relationship our new importations are quite hardy fish. Besides this the liveliness of the fish is worth mentioning. 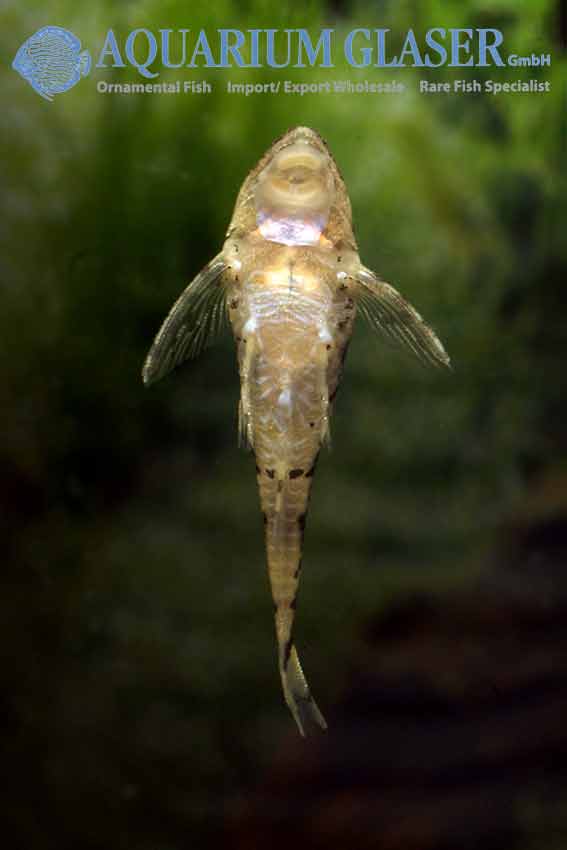 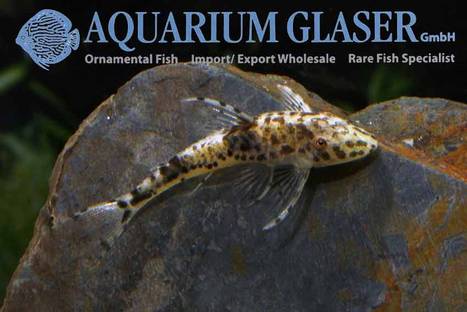 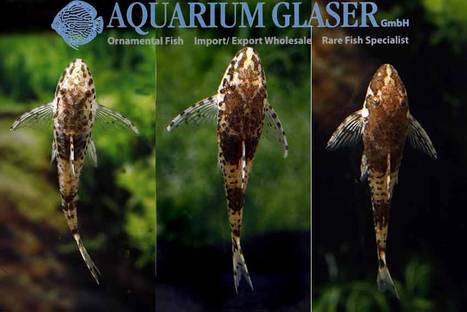 Chocolate gouramis are very beautiful, but demanding anabantoids. Thus they should be kept by experienced aquarists only. There are three genera of chocolate gourami, Sphaerichthys (four species), Parasphaerichthys (two species) and Ctenops (monotypical). The only species in Ctenops is nobilis, the Noble gourami from India. 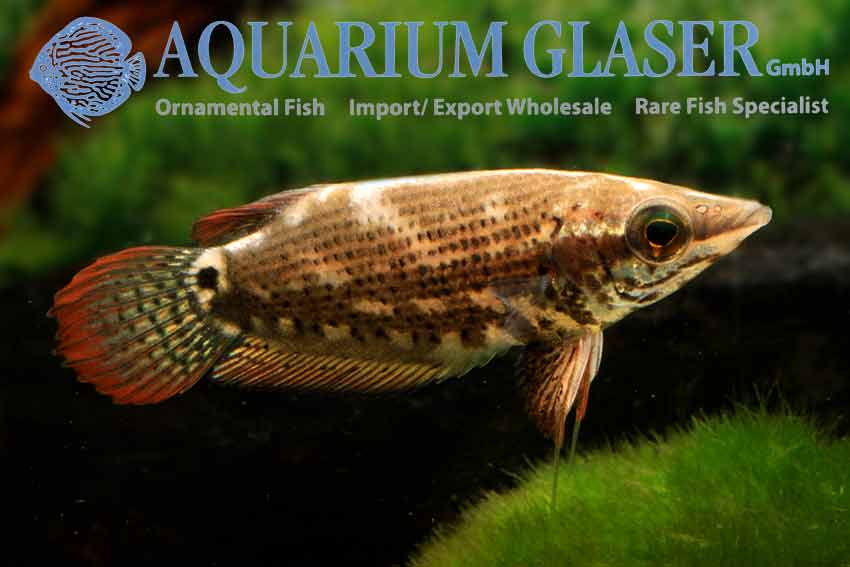 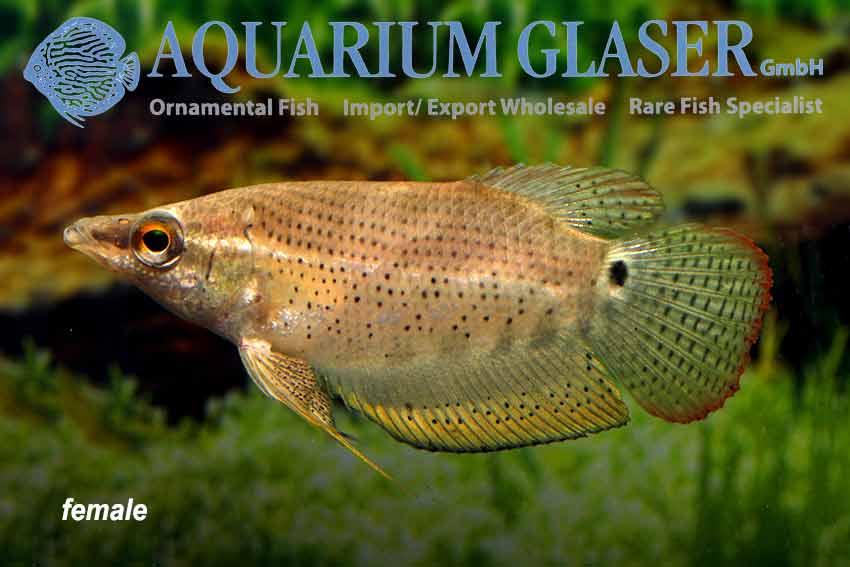 The fish lives in subtropical regions and needs an imitation of the seasons (hot and dry summers, cool and rainy monsoon seasons) to stay healthy under aquarium conditions. On the other hand the species is undemanding regarding water chemistry. Syntopical species are for example zebra barbs (Danio rerio), rosy barbs (Pethia conchonius) or dwarf gouramis (Colisa lalia). 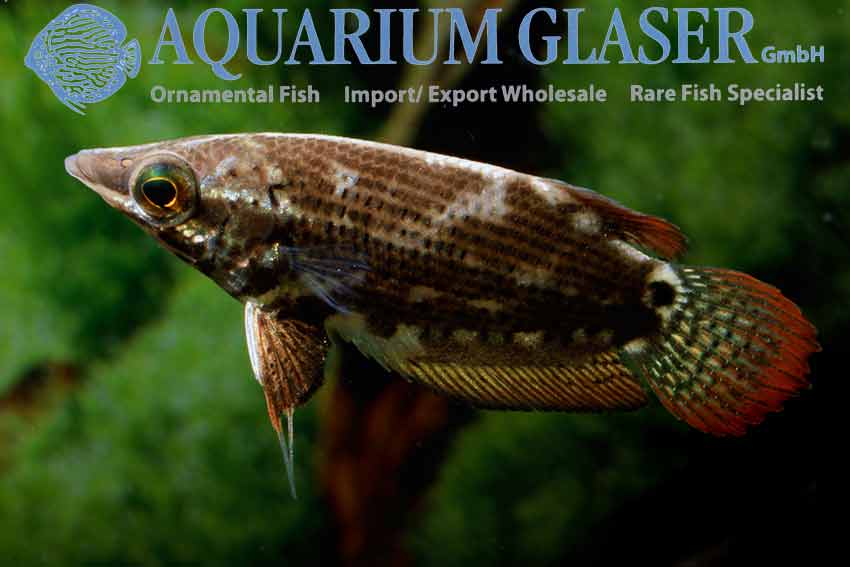 Fish that do not belong to their own species are ignored by Noble gouramis as well as plants are. As Ctenops nobilis stays very shy in a single species tank it makes sense to combine it with other, peaceful fish like the ones named above. 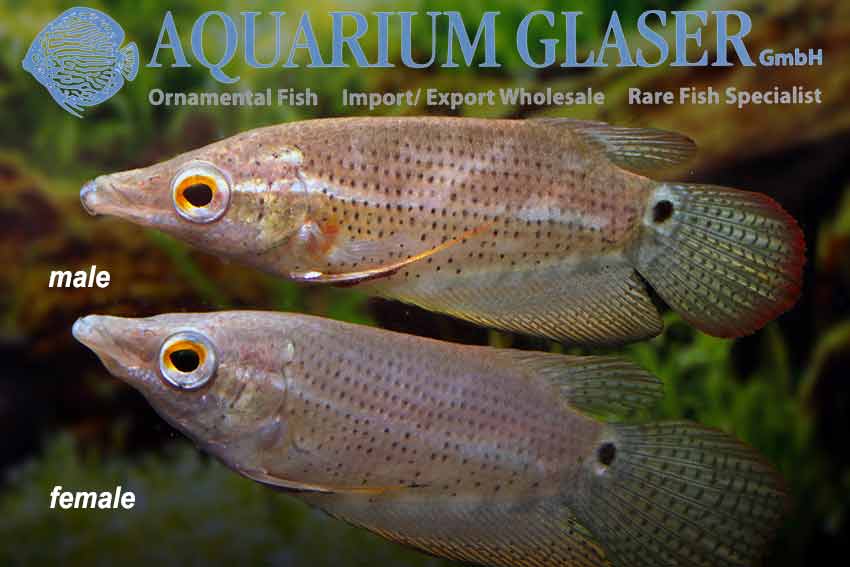 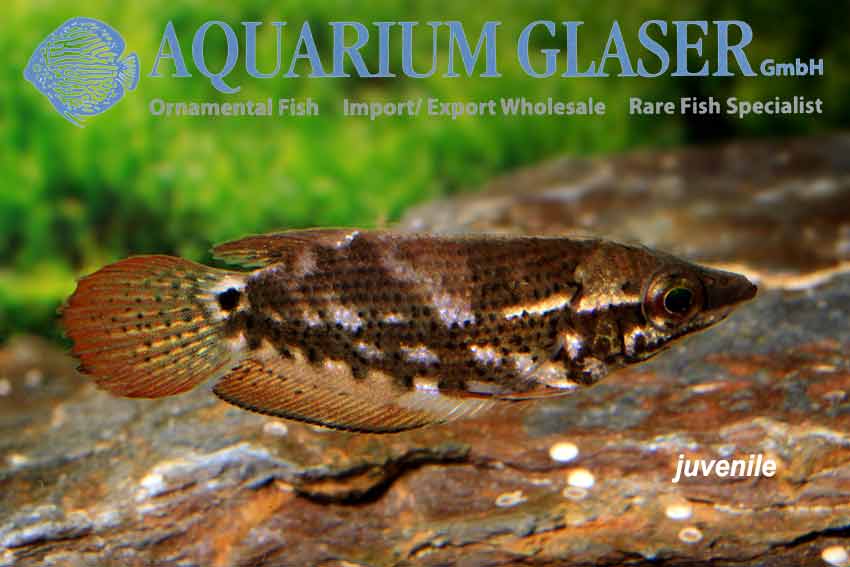 The knifefishes of the genus Gymnotus are the most attractive knifefishes at all – at least in respect of the coloration. They are so to say small Electric Eels. However, the electric impulses produced by Gymnotus are much weaker. They are used only for communication and for orientation and can be compared with the echolocation of the bats. Species of Gymnotus are medium sized fishes and reach a total length between 10 and 40 cm.

Sadly all members of the genus are very aggressive against conspecifics. So it is extremely difficult to keep them in groups. This is a sad thing, for at least one of the numerous species of Gymnotus has been proven in the meantime to be a mouthbrooder. So a lot of interesting observations can expected during a successful breeding. 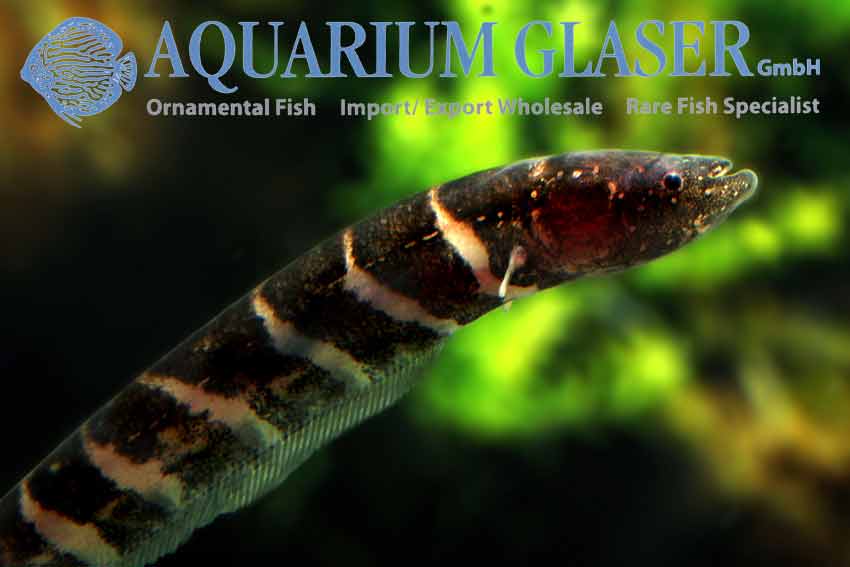 Gymnotus stenoleucus is one of the smaller species of the genus. So far no specimens longer than 15 cm have been reported. Our specimens are even smaller, namely between 7 and 10 cm. They originate from Peru.