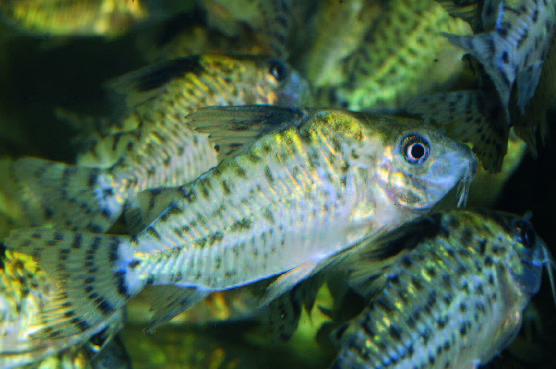 The mailed catfishes of the genera Corydoras, Scleromystax, Brochis, and
Aspidoras are quite commonly termed shoaling fishes in the aquarium
literature, combined with the suggestion that at least four to six
individuals should always be kept together. But in the aquarium mailed
catfishes swim in a group at best only now and then, so are they really
shoaling fishes?

Now, in the first place four to six individuals are never a shoal, as in biology a shoal is defined as a large (!), usually anonymous (i.e. the individual members of the shoal don’t know one another) group of fishes. The Sardine (Sardina pilchardus), a marine fish, is a typical shoaling species. Similar behavior is seen in other large groups of animals such as flocks of Starlings (Sturnus vulgaris, a very common European bird) and swarms of bees. It is a characteristic of all these groups that they react like a single large organism. The flight maneuvers of a flock of Starlings and the swimming maneuvers of a shoal of Sardines are really impressive! The study of the mechanisms that permit these large groups to function is a fascinating area of research.

Shoals in the aquarium?
There are hardly any fish species that swim in a shoal in the aquarium and behave as described above. The sole exception is the Red-Headed Tetra (Hemigrammus bleheri). If this species is kept in sufficiently large numbers (50 individuals upwards) in a suitably large aquarium (150 cm or more long), then genuine shoaling behavior will be seen, at least some of the time. All other so-called shoaling fishes, i.e. numerous characins, barbs, danios, rasboras, and of course, mailed catfishes, don’t usually do so. On the contrary, even if you have six mailed catfishes in the aquarium, you will only rarely find them close together. These fishes always maintain a certain distance from one another. In particular the so-called saddle-snouts among the mailed catfishes are almost always solitary.

So what should we call this behavior?

Instead of shoaling fishes these species are better termed schooling fishes or social fishes. This means that individuals of the species in question are in constant, peaceful, intraspecific communication with one another. In the aquarium they frequently even know each other personally (that is probably hardly ever the case in the wild). The fact is, such fish species often develop aberrant behavior if they are kept singly, and hence the advice that they should always be kept in a group is generally correct. But by contrast there are also lots of fish species that are tolerant of conspecifics but don’t generally require their company in order to thrive, and then there are also the strictly solitary species that won’t tolerate any conspecific except perhaps a mate, and then usually only at the time of breeding.

It is a fact that in the wild some Corydoras species do occur in genuine shoals, i.e. groups of several hundreds or thousands of individuals. These species are frequently seen at reasonable prices in the trade, as they are easy to collect in large numbers. But unfortunately even these species exhibit their true shoaling behavior for only a few days in the aquarium. During this period they really do swim like a single large organism as if the members of the shoal were moving as one. But in reality each member of the shoal simply copies what its neighbor does immediately. Once they have settled in and learned that there is no real danger threatening them in the aquarium, they very rapidly abandon the shoaling behavior. Its biological purpose – relative protection from predators – is redundant in the aquarium, as there are no predators there. And now the downside of shoaling behavior predominates, namely that any food has to be shared with neighbors in the shoal. Hence mailed catfishes very soon separate off and each goes about its everyday business alone. Even so, the presence of conspecifics has a positive influence, as it indicates to the mailed catfishes that if necessary they will be able to form a shoal again. This gives the fishes a feeling of security and hence improves their well-being. But because mailed catfishes don’t need to know each other individually and in all probability can’t count either, four to six specimens are adequate in the aquarium. Each individual fish will meet conspecifics sufficiently often in the aquarium to get the feeling that plenty of them are present. Even though only a few people (mostly staff in the wholesale trade who look after the fishes after importation) have the opportunity to observe genuine shoaling behavior in mailed catfishes in the aquarium and for only a short period of time, shoals of mailed catfishes really do exist!