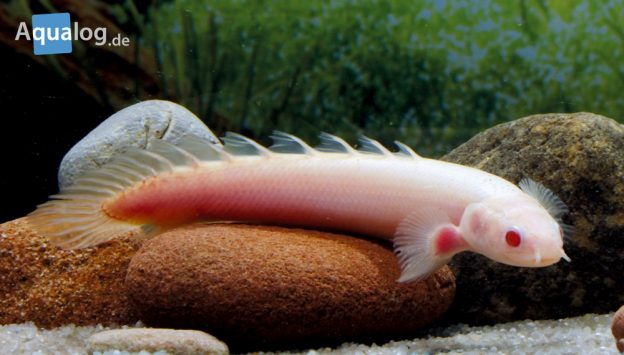 For some time now there have been strange, snow-white to ivory-colored, cigar-shaped fishes with ruby-red eyes in the trade. So what are they?

They are in fact albinos of one of the most ancient fish species on our planet, a so-called living fossil, namely the Senegal Bichir, Polypterus senegalus. Fossil finds of this species have been discovered that purportedly date from 60 million years ago, a time when the dinosaurs still ruled the Earth!

The dinosaurs are long gone, but the bichirs remain. Their existence – at present 13 species are recognized – is a mystery. Why have they survived for so long, even though entire classes of animals have disappeared from our planet within much shorter time frames? And how have they adapted to the repeated dramatic changes in environmental conditions? The last question at least has been answered by DNA studies – through hybridization! Their genes clearly indicate that various species of bichir have repeatedly crossed with one another. In fact the hybrids that result from such crosses are unable to breed together (at least there is no indication that anything of the sort takes place in the wild), but they are able to mate with the parent species. In domestic animals this is termed back-crossing. The result is that new genetic material is introduced into the population, apparently fitting it for the battle for survival. So it seems that gene technology isn’t a human invention, some fishes have been practicing it for millions of years. 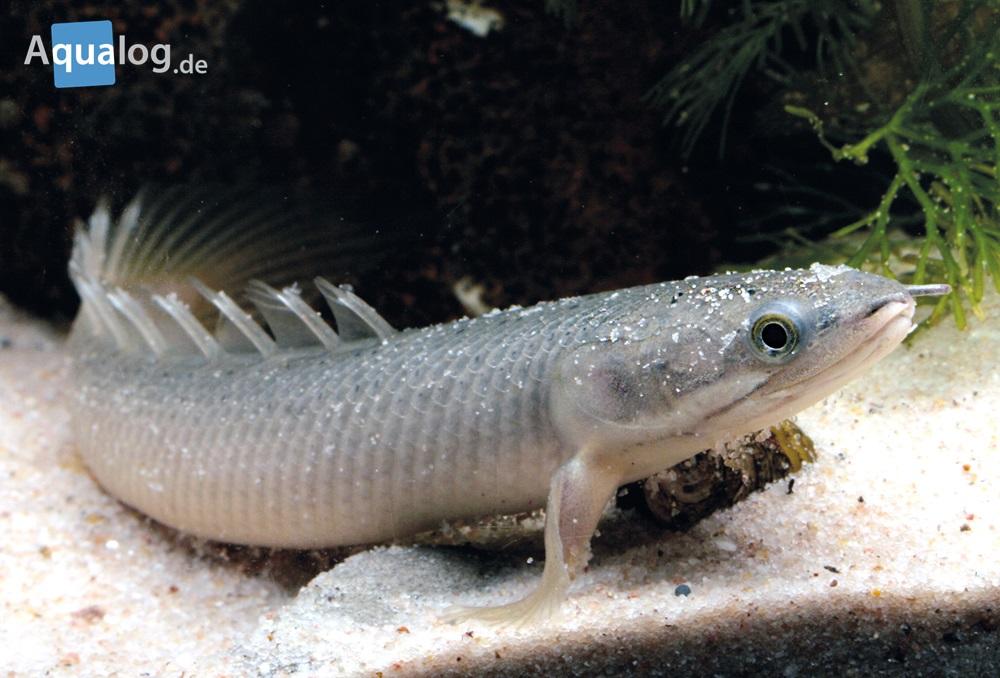 In addition a part has undoubtedly been played by the legendary “survival pack” that Mother Nature has created for the bichirs. Their construction is so designed that it would appear impossible to improve in any way. Thus these fishes breathe not only via gills, but also with lungs. Their bodies are enclosed in a chain-mail shirt of rhomboid bony plates termed ganoid scales, which make these fishes almost invulnerable (at least compared with the delicate scales of most other fishes). Bichirs are exclusively carnivorous, and, because they are poikilothermic and hence do not – unlike us humans – have to use the majority of the energy obtained from food in order to maintain body temperature, they can get by for a long time on little food. For their own part, bichirs have little attraction for predators. Their individual little dorsal fins, the so-called finlets, are razor-sharp – and well and truly scratch if swallowed! Human medicine hasn’t yet turned its attention to the bichirs, but it seems very likely that these survival specialists may even offer means of overcoming cancer and pathogenic viruses.

Bichirs are readily maintained in the aquarium and make interesting objects of study. But because they are predators, in Europe they are maintained mainly by specialists. By contrast they are very popular in Asia. They are reminiscent of the dragon, the mythical beast that brings good luck. And South-East Asia is also the source of the albino tank-breds of Polypterus senegalus. Albino creatures exercise a great fascination for humans, not only in Asia, but also here in the west. Just think of the myths and legends regarding white hinds. Unicorns are always portrayed as white. And in his novel Moby Dick Herman Melville chose a white Sperm Whale as a symbol of invincible Nature, opposition to which always results in harm.

The albino cultivated forms should also be viewed in this context. They divide aquarists into two camps – those who abhor them as supernumerary unnatural creations and those who are fascinated by their pure white color. 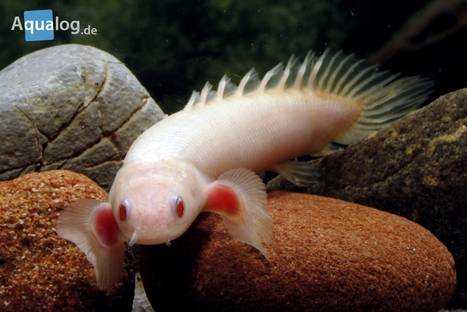 Polypterus senegalus is widespread in West and Central Africa. Wild-caught imports usually come from Nigeria. The species varies little in color, and looks essentially the same everywhere – gray with a few little black spots. The fins are whitish gray, except in a dwarf form from Nigeria that exhibits sexual dimorphism at just 10 cm in length and has yellowish fins. Normally maximum length is around 30 cm in the Senegal Bichir, and references to different sizes in the literature are the result of confusion with other bichir species. Sexual maturity is attained at a length of around 20 cm and an age of about two years. Males are smaller and slimmer than females and have a much-enlarged anal fin that is wrapped around the female during spawning to form a “bowl” in which the millet-sized eggs are caught and fertilized. The young that hatch from the eggs look totally different to the parents and are more reminiscent of newt tadpoles, as they have bushy external gills. In addition very young Senegal bichirs are striped brown and white, but they soon lose this juvenile pattern at a length of around four centimeters. 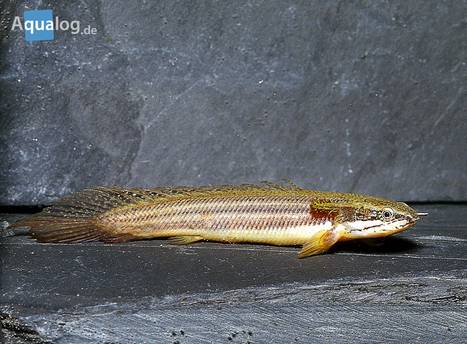 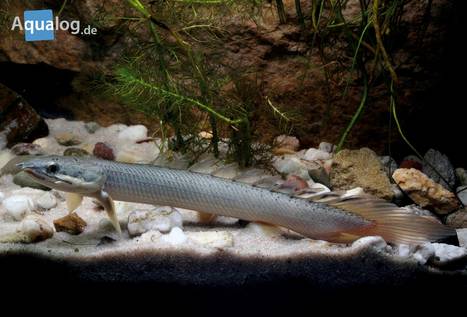 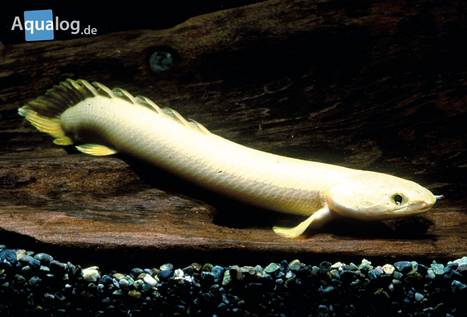 The maintenance of these fishes is very easy. They make no demands at all regarding water chemistry, and can be kept in any water suitable for humans to drink. Senegal Bichirs are completely peaceful among themselves and towards any fishes too large to be viewed as food. They are best kept in a small group of 4-6 specimens. The aquarium for this should be around 120 cm long. The decor is of no importance to the bichirs but these rather stiff-bodied fishes should be allowed sufficient swimming space and the tank shouldn’t be too densely planted. A moderate current, a substrate of soft sand, muted light (bichirs are crepuscular/nocturnal), and a water temperature of 24-28 °C (sometimes lower to stimulate breeding, but best if the temperature doesn’t drop below 18 °C) will ensure the well-being of Senegal bichirs. The best food to offer is larger frozen foods (mussels, shrimps, Stint, cuttlefish, etc.), plus occasional live food in the form of earthworms. Around 25% of the water should be changed weekly.
For breeding the water changes should cease for a number of weeks and the usual maintenance temperature be simultaneously lowered. Then several large water changes (80-90% of the tank volume) should be performed in rapid succession (at intervals of 1-2 days), if possible using somewhat softer water. And finally the temperature should be raised to around 28 °C.
The males drive rather vigorously and display with the anal fin spread wide, and the eggs are scattered loose in the tank. Depending on the size of the female there may be several hundred eggs. 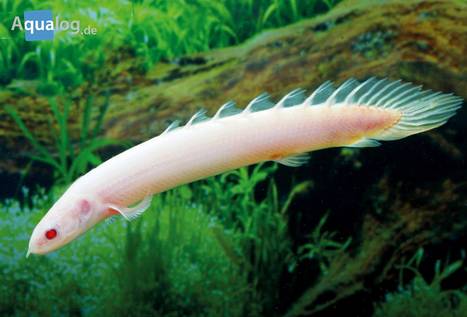 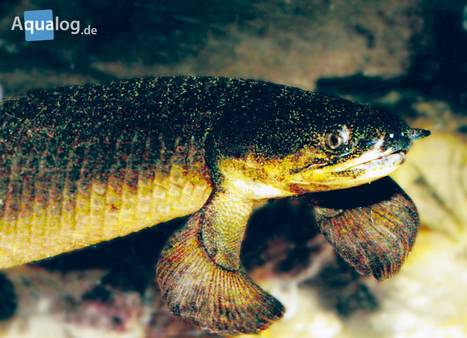