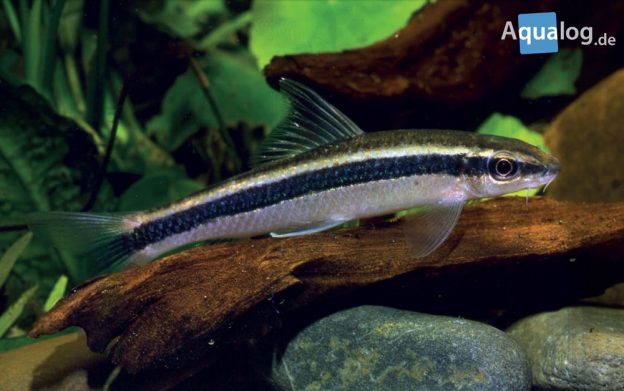 In the aquarium hobby, algae is a topic that is discussed almost as exhaustively as the weather. There is always something to say about it, and in the final analysis we are all subject to weather. The same applies to algae. One or another species of algae grows in every aquarium. This annoys many aquarists and they look for fishes that will eat these algae. Many aquarists have had good experiences with the Siamese Algae Eater and the Stonelapping Minnow, both of them from Thailand.

The two species are extremely similar in their coloration and hence have repeatedly been confused with one other. They can, however, easily be told apart by a number of color characters. In the Siamese Algae Eater the black midlateral stripe extends well onto the caudal fin, while in the Stonelapping Minnow this longitudinal band always ends at the base of the tail. The dorsal fin of the Siamese Algae Eater is always completely transparent and colorless, while that of the Stonelapping Minnow is striped, albeit in rather delicate, pastel shades. And finally there is also an anatomical character that makes it possible to distinguish them: specifically, the Siamese Algae Eater has two pairs of well-developed barbels, one on the snout and one at the corners of the mouth, while the Stonelapping Minnow has only one pair of barbels sited at the corners of the mouth and none on the snout.

Scientific names have universal validity worldwide. Every species of animal bears only a single valid scientific name. If – for whatever reason – a species is described several times then only the oldest name has validity, and the others are so-called invalid synonyms. By contrast anyone can think up their own popular name, as there are no rules of any kind. In addition, every species has numerous different popular names worldwide. In Germany, for example, the Siamese Algae Eater is called the “Siamensische Rüsselbarbe” (= Long-Nosed Siamese Barb) and the Stonelapping Minnow is the “Gestreifte Saugbarbe” (= Striped Sucker Barb). These very different names can lead to entertaining soundtracks when natural history films are dubbed into foreign languages as the dubbing editor has no knowledge of fishes. Thus while the German for catfishes is “Welse”, on German TV they are usually referred to as “Katzenfische” based on the English name of “catfish”… These problems don’t occur with scientific names. The pronunciation of Latin or Greek words in other countries may take some getting used to, but sooner or later comprehension is possible.

One of the most important students of the fishes of Thailand was Hugh McCormick Smith (1865-1941). To the present day his book The fresh-water fishes of Siam, or Thailand, published in 1945, remains one of the most important and valuable identification guides to the freshwater fishes of the region. In it the Stonelapping Minnow is termed Garra taeniata and the Siamese Algae Eater (or a closely related species, more of which anon) as Epalzeorhynchus siamensis. Smith had himself previously described both species as new taxa back in 1931. When the first algae-eaters were imported to Europe from Thailand around 1962 it was logical to identify them following Smith. Unfortunately Smith had overlooked the fact that his species Garra taeniata had already been described as Garra cambodgiensis by Gilbert Tirant in 1884. Because the latter name is clearly older it takes precedence over G. taeniata, a name that should no longer be used. But unfortunately the Stonelapping Minnow is often still found under the incorrect name of Garra taeniata in the aquarium trade, as that is the name used in the majority of older aquarium books.

Matters are somewhat more complicated in the case of this species, in that it has been transferred to another genus and is now called Crossocheilus siamensis. Such changes of genus are a nightmare for aquarists, but they repeatedly happen and are sometimes simply unavoidable, as they represent an improvement in knowledge. In addition, in 2000 ichthyologist Maurice Kottelat established that Crossocheilus siamensis corresponds to a great extent with a species that was described as Crossocheilus oblongus by Johan Coenraad van Hasselt as long ago as 1823, ie more than 100 years before C. siamensis, and declared the two species to be synonymous. So the Siamese Algae Eater is now usually known as Crossocheilus oblongus. Unfortunately, however, it isn’t very likely that things will remain thus for long. In 2009, in a study of the fishes of the Batang Hari river in Sumatra, Tan Heok Hui and Maurice Kottelat established, during the description of a new Crossocheilus (C. obscurus), from that river, that there are apparently a whole series of different species in the genus, all very similar in external appearance. And that includes Crossocheilus oblongus. This species was originally described from species, but unfortunately at present nobody knows what live Crossocheilus from Java look like, as important details can no longer be seen in the almost 200 years old museum specimens of C. oblongus and no specimens are being exported from Java for the aquarium hobby. But one thing is sure: Smith wrote that C. siamensis exhibits only one pair of barbels and actually examined his specimen very closely in this respect, as the only other Epalzeorhynchus species (E. kalopterus) known to him in 1931 has two pairs of barbels and this character had even been used in the generic diagnosis of Epalzeorhynchus. But, as can clearly be seen in the photo, the Siamese Algae Eaters maintained in our aquaria have two pairs of barbels. For the time being, at least, there is much to suggest that the Siamese Algae Eaters that swim in their thousands in aquaria all over the world belong to an as yet undescribed species, new to science!

Many people may think all this is just nit-picking. Two or four barbels, does it matter? Do we really need to alter names for that reason and make everything complicated? Well, that is quite simply a matter of viewpoint. Tiger and Lion differ in far fewer characters comparatively speaking, just in the coloration of their hides and through male lions developing a mane. It is impossible to tell a skinned Tiger apart from a skinned Lion unless DNA analysis is employed. But despite this nobody seriously doubts that Lion and Tiger are two different species. The study of small freshwater fishes is infinitely more difficult than that of large mammals. Without the aquarium hobby nothing at all would be known about the majority of fish species beyond the fact that they exist. Unfortunately animal and plant species are becoming extinct every day as a result of environmental changes caused by humans. Their loss can be compared to the destruction of a major work of art such as the Mona Lisa. Obviously there are innumerable reproductions of the Mona Lisa, but the original painting is and will always remain unique. The same applies to animal species. Even if they maybe appear unspectacular to us externally, they are still masterpieces of Mother Nature and every species is totally unique in its own special way. Hence the study of biodiversity, before it is too late, is one of the most important concerns of our times. Where freshwater fishes are concerned, aquarium observations are an almost indispensable part of the process. 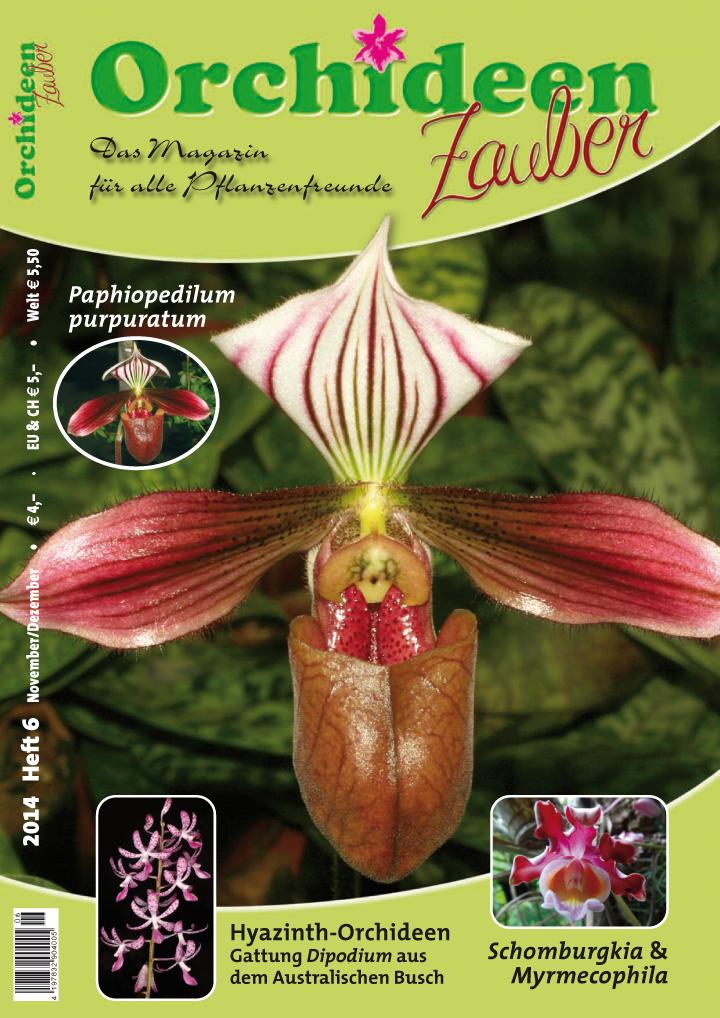 The maintenance of the Siamese Algae Eater and the Stonelapping Minnow is easy. Both species grow to around 15 cm long and should be kept in groups. Water chemistry (pH and hardness) is of subordinate importance as these fishes are very adaptable in this respect. In the case of Garra cambodgiensis only juveniles are very hard-working algae eaters, with adults preferring to eat “normal” fish food, while the Siamese Algae Eater is an excellent eradicator of algae lifelong. Because both species develop an order of rank and thus exhibit very interesting social behavior, their maintenance in the aquarium can be recommended even where there isn’t as much need for combating algae. These fishes aren’t bred commercially here in Germany as it is more economical to import them from Thailand. But fundamentally Garra species have proved relatively uncomplicated when it comes to breeding. Like barbs they spawn over coarse gravel and don’t practice any brood care. By contrast Crossocheilus species, just like the members of the genus Epalzeorhynchus, have been induced to spawn only with the aid of hormone injections such as are used for food fishes (eg Rainbow Trout), as these fishes are thought to undertake spawning migrations in the wild and hence it is difficult to trigger spontaneous spawning in the aquarium. Even so periodic chance spawnings do take place in the aquarium. These fishes likewise don’t practice any brood care. In Garra cambodgiensis males and females can be distinguished on the basis of head shape, while in Crossocheilus oblongus females can be recognized only by their rather plumper shape (see photos). 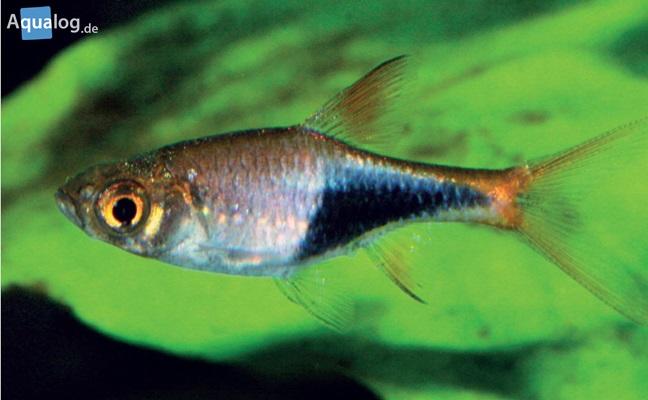