The frogs of Europe inhabit swampy, inhospitable terrain – with one exception: tree frogs. These smart little creatures, which grow to around, 5 cm in size, live in bushes, where their fresh green coloration provides excellent camouflage.
There are two tree frogs in Europe, though they look so similar that laymen can’t usually tell them apart. These frogs have attracted the attention of people since time immemorial. Tree frogs were purportedly kept in the temples of Apollo, a Greek and Roman god who was responsible for, inter alia, healing, light, spring, and the fine arts, and were supposed to prophesy all sorts of things there. So just as the will of the gods and the future could be read from the flight of birds, the same could be effected with tree frogs. If the frogs hid away that indicated that there would be bad weather, but if on the other hand the frogs sat clearly visible among the branches then that was supposed to mean good weather on the way.
Can tree frogs forecast the weather?
This interpretation of animal behavior isn’t inherently wrong, although it isn’t very accurate either. Essentially tree frogs, being poikilotherm creatures, have a body temperature that matches the ambient temperature. At the same time their activity temperature is higher than that of other, ground-dwelling frogs. If the weather is very cool and rainy then you will see very little of tree frogs. By contrast, on mild spring days they can even be seen during the day (these frogs are more inclined to be crepuscular and nocturnal) when they sunbathe. That type of spring day also entices us humans outside, we are very pleased when the winter is finally over and Nature re-awakens into life. So the tree frog has a very positive emotional quality and its appearance has become associated with fine weather. In the Middle Ages there was a superstitious belief that a live frog kept in the cellar would bring the occupants of the house good luck and well-being. The combination of beliefs in the prophetic powers of tree frogs, handed down from days of yore, of observation of nature, and of the medieval superstition probably eventually led to people (presumably in the Biedermeier, starting 1815) beginning to keep frogs in jars with ladders as weather forecasters. If the frog sat on the bottom that meant bad weather, but if it climbed up the ladder then that meant good weather. Only the arrival of terrarium study at the end of the 19th century put an end to this cruel form of maintenance: a tree frog cannot live long in a glass jar. The upright form of the jar prevents sufficient fresh air entering via the opening, so the creature in the jar would often be on the edge of suffocation. If the room became somewhat warmer and affected the frog’s “operating temperature”, then it would climb as far up as possible to where the freshest air was. On cool, rainy days (don’t forget, there was very little heating and what there was usually restricted to individual rooms), the poor creature would hunch on the bottom, half suffocated and barely able to move. In addition, at times of low atmospheric pressure the substrate in the jar released a fog of foul-smelling gases that immediately prevented the frog from lifting itself from the bottom.The question of whether tree frogs can forecast the weather must thus be answered with an unequivocal “No”, they simply react to existing weather conditions. Hence even the most nostalgic frog fan should never countenance the idea of keeping tree frogs in a jar.

Europe vs. North America
As already mentioned there are two tree frog species in Europe, Hyla arborea and the Mediterranean Hyla meridionalis, and they are also widespread in Germany (although they have become rare due to biotope destruction). The taxonomic status of additional described forms, for example the Cretan Tree Frog and the Iberian Tree Frog, is hotly disputed among scientists in the field, but of no further interest here. Until the 1970s these tree frogs were the species usually kept in the terrarium, as they are very attractive and easy to maintain. But then all European frog species came under a ban on trading in wild animals (this was termed conservation) and they slowly but surely slipped into oblivion. Obviously tree frogs can be bred very easily and effectively, but naturally captive-bred specimens are significantly more expensive than wild-caught, and for this reason nowadays it is the Carolina Tree Frog (Hyla cinerea), which is very common and widespread in the south-east of the USA, that is the commonest and cheapest tree frog species available in the trade. The main difference in coloration between the Carolina Tree Frog and the European species is that the flank stripe in H. cinerea is always snow-white as opposed to black in the Europeans. Note that the trade ban has had no detectable beneficial effect on populations of the European tree frogs. Populations continue to decline in places where their habitats have been destroyed, and in addition there is the worldwide frog die-off. A healthy frog population cannot be endangered by the removal of small numbers of specimens – relative to population numbers overall – for the livestock trade.

The Carolina Tree Frog
This attractive and very characteristic tree frog was described as long ago as 1799. Its distribution in the south-east of the USA is as follows: from southern Texas eastwards across the coastal plain to the Florida peninsula and Delaware; from eastern Texas and western Tennessee north to the Mississippi drainage and south-east Missouri, central, eastern, and southern Arkansas, southern Illinois, western Kentucky, and the extreme south-west of Indiana. The species has been introduced to north-western Puerto Rico. The coloration of the species varies to some degree. Usually these frogs are light green and have a white stripe on the side, extending along the upper jaw and the flank. This stripe can, however, sometimes be absent. Sometimes these frogs have small, dark-bordered, golden dots on the back. For some time a northern (Hyla cinerea evittata) and a southern subspecies (H. cinerea cinerea) were distinguished, with Hyla cinerea evittata supposedly lacking the typical lateral stripe and having a more massive head. But Reed (1958) showed that these differences occur everywhere as part of the overall variability of the species and don’t qualify as a criterion of specific or subspecific status. Hence nowadays it is assumed that the Carolina Tree Frog doesn’t include any subspecies. Male and female are difficult to distinguish externally. Males possess a vocal bladder in the throat and grow to only around 3.2 cm long, while females achieve double the length at 6.4 cm long. Unfortunately, however, females are only very rarely seen in the trade. This is because males form large calling assemblies of several hundred individuals and are particularly fond of congregating in expanses of floating Eichhornia, where they are very easy to catch. Because the females approach the males only when they are ready to spawn, and then retire back into the local scrub, they mainly elude the collectors. The spawning season of the Carolina Tree Frog is from March to October in the southern part of its range, and from April to September in the north. The call of the male sounds rather like a cowbell from a distance, but close to is more reminiscent of the cackling of geese. The species is very fertile and a female can spawn several times during a single season. The size of the clutch is extremely variable and fluctuates between 700 and 2150 eggs on average (minimum 478, maximum 3946), depending on provenance and probably also the size and condition of the female. On hatching the tadpoles measure around 4.5 – 5.5 mm long and grow to around 6 cm before metamorphosis, requiring 28 to 44 days to do so. 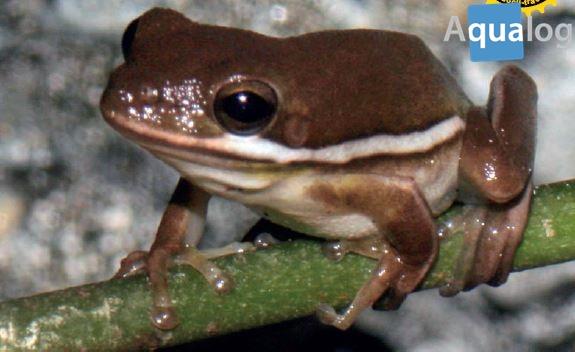 In the terrarium
Hyla cinereais very adaptable and associated with human settlement. The most important ecological requirement posed by the species is the availability of permanent waters with as low a fish population as possible (as fishes eat tadpoles) and a wealth of vegetation. The males call from slightly elevated calling sites between 30 and 50 cm above the water’s surface. Being typical tree frogs, Carolina Tree Frogs hardly ever jump, but instead climb and walk around. All this can easily be reproduced in the terrarium. Thus the terrarium forHyla cinereashould be set up as a moist terrarium or even an aqua-terrarium, with a large, well filtered water area and abundant planting. These attractive frogs can be fed with soft insects such as houseflies or crickets. The Carolina Tree Frog is mainly crepuscular, but once acclimated can often be seen by. The temperature should drop below 20 °C only for overwintering, and at 16 °C the frogs start to become sluggish and in uncoordinated in their movements. The Carolina Tree Frog has often been bred successfully and this only requires overwintering for a few weeks at a temperature of around 15 °C with a reduced period of lighting (8-10 hours instead of the normal 12-14 hours). Unfortunately, as already mentioned, females are scarce, so the best course is to obtain 10 to 15 half-grown specimens. There will then be a good chance of there being females in the group as well, rather than just a bunch of males.
If you are now filled with the desire to keep and breed Carolina Tree Frogs, your pet dealer can undoubtedly order them for you from a trustworthy wholesaler. 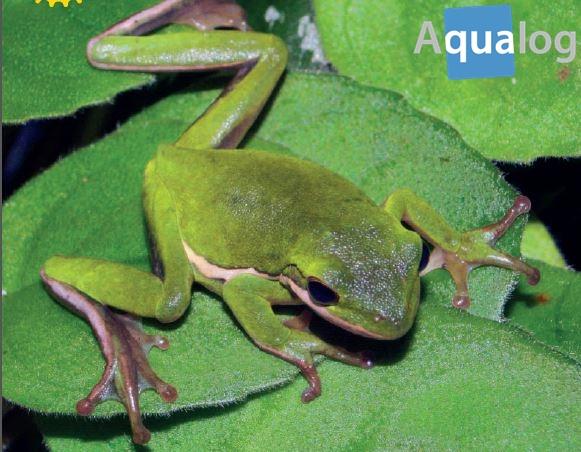