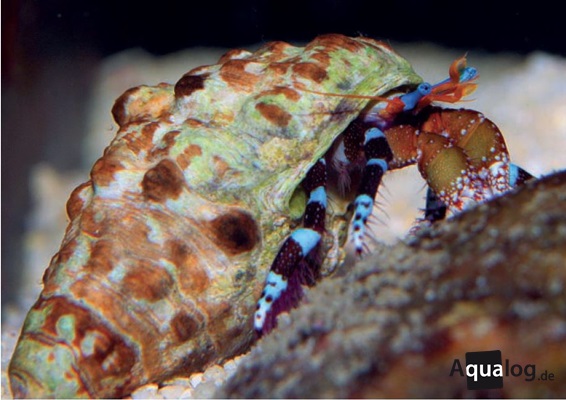 There is no doubt that the main reason for setting up a marine aquarium is the legendary colorfulness of the fishes and corals. But once the tank is set up and matured it becomes clear that a few extra little helpers may be required, for example to keep down the algae, the Aiptasia, or the bristleworms, to loosen the substrate a bit, or to clean up uneaten food. In the sea there is a creature designed to deal with every such problem and some of them are, in addition, so delightful that it is worth taking a closer look at them…

Anyone who has collected seashells on the beach while on holiday and held them in the hollow of his hand, will undoubtedly have received quite a shock at some stage when a shell suddenly sprouted little legs and tried to force its way to freedom. In European holiday areas the legs will generally belong to members of the genus Clibanarius, which grow no larger than a centimeter or two long. In the marine aquarium these small hermit crabs are very entertaining, easy to keep, and useful little creatures, as they are constantly on the search for food and hence keep the tank free of wastes, while at the same time never causing any harm to other residents. Another hermit crab species is Calcinus elegans, which may be considerably larger at a good five centimeters in length, but is just as harmless and beneficial. Moreover this hermit crab is a real beauty! Calcinus elegans is imported mainly from Australia and two points are particularly worth bearing in mind when keeping it in the home. Firstly the species may be omnivorous, but the focus of its diet is noticeably in the area of algae. Hence you shouldn’t try to cultivate algae in the Calcinus tank as any such attempt may be counteracted by Calcinus elegans. Sometimes even Caulerpa will be regularly decimated. And secondly, C. elegans grows rather quickly, and because its shell doesn’t grow as well, the hermit will need to “move house” regularly. In order to enable it to do so, the aquarist must provide a good selection of empty shells of various sizes in the tank. But that is the limit of the difficulties in dealing with these pretty crabs. They can even be bred in the aquarium, although the free-swimming larval stages usually have to be transferred to special tanks, as in “normal” aquaria they either end up in the filter or are regarded as a welcome supplementary food by other tank residents. The sexes cannot be determined in living specimens from the parts that protrude from the shell, but if the hermit is wandering around shell-less (eg after a molt) then the females can be recognized by the pleopods on the posterior body, as these limbs are completely absent in males. 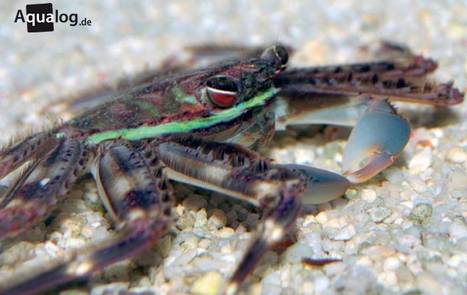 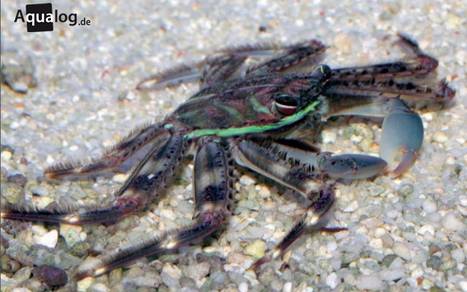 Coral-reef aquarists are usually as wary of crabs as the Devil of holy water. And normally justifiably so, as crabs are almost invariably omnivorous, which should be taken literally, as eating everything. Even though they don’t find some livestock palatable, the crabs will keep on checking to see if the taste has changed, and sooner or later the corals stop opening and fishes fall prey to the crabs overnight when they are sleeping (the fishes, not the crabs, or else it might be the other way round!). In special aquaria, however, crabs are nice pets and interesting to keep, but that is another story. There is, however, a notable exception to the rule of “avoid crabs in the reef aquarium”: Percon planissimum. This crab, whose body is almost square in shape, grows to around 3 -10 cm in size, depending on what you measure. If you take just the carapace width then you arrive at about 3 cm, but if you take the entire leg-span then the result is sometimes more than 10 cm. This crab leaves the majority of its tankmates in the reef aquarium completely in peace and prefers to feed on algae. Apropos of which, the same applies as stated above regarding hermit crabs. You should be aware, however, that Percon planissimum also has a taste for gastropods. But no assaults by this crab on other aquarium occupants (corals, fishes, echinoderms, etc.) have been reported to date. All crabs are escape artists, and this should be borne in mind as otherwise sooner or later you will either find a dehydrated crab, or (more likely) be deafened by someone in fear of their life screaming at the top of their voice when a dust-coated “giant spider” suddenly scuttles across the room. Neither is desirable, so aids to escape such as filter hoses, heater cables, etc should all be made crab-proof. Percon planissimum should be kept singly or in pairs, as individuals of the same sex won’t tolerate one another. The sexes can be easily told apart by the form of the posterior body (the pleon). The species is distributed in warm seas practically worldwide if Percon gibbesi is regarded as being the same species, or in the eastern part of the Old World if P. gibbesi is regarded as a western sibling species. Since the late 1990s the latter has been regarded as an invasive species in the Mediterranean, where it is spreading rapidly. 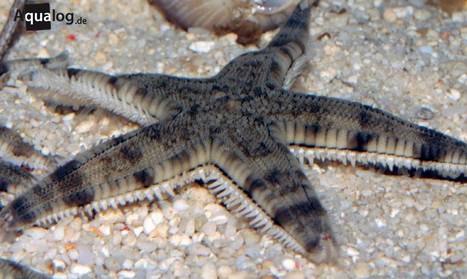 Sea-stars never cease to fascinate. This is, inter alia, because of their unusual symmetry. Almost all the animals on this planet are bilaterally symmetric, in other words if an axis is drawn the length of their bodies then we get a left-hand and a right-hand half that are very similar to one another. Not so with sea-stars and other echinoderms such as sea urchins, crinoids, and sea cucumbers. They have developed a five-way symmetry, termed pentamery, around five axes of symmetry. Nevertheless they belong to the Bilateria, that is animals with bilateral symmetry, as their larvae exhibit perfectly normal bilateral symmetry. Beautiful though many sea-stars may be, numerous species are of only limited suitability for the reef aquarium as they can be rather predatory. Archaster typicus, the Sand-Sifting Sea-Star is a species unlikely to be purchased on account of its colorfulness, but this species doesn’t actually need to be colorful as it spends all the day buried in the substrate, emerging from this domicile only at night then only occasionally. But Archaster don’t just hide in the substrate, they feed there as well. And that makes them extraordinarily useful, as firstly, they continually dig through the bottom to do so and prevent any harmful compacting; secondly, they can be relied on to eliminate uneaten food; and thirdly, they prevent the rather unattractive brown diatomaceous algae from colonizing the substrate, as these too form part of this sea-star’s diet. Archaster typicus grows to up to 25 cm across and comes from the Indo-Pacific. The genus Archaster contains three species, A. angulatus, A. lorioli, and A. typicus, which all look very similar. It can probably be assumed that as a rule it is A. typicus, which is the most widespread species of the genus, that is seen in the trade. It is collected for export in the Philippines in particular. Maintenance is problem-free, although it must always be strictly borne in mind that all echinoderms must be transported under water, as otherwise air can get into their stomachs and prove fatal in the long term. Sea-stars have separate sexes but these cannot be told apart externally. Although males remain smaller than females, this information is of little use in practice, so anyone who wants to breed them should buy several specimens as it will then be statistically probable that the group contains both sexes. Even so there are to date no reports of the successful breeding of this sea-star species in the home aquarium. However there is a body of scientific literature on the genus in which aquarists interested in breeding this type of sea-star will find a host of interesting information. For example, Archaster are noted for mating in large assemblies, with the males clambering onto the backs of the females and performing pseudocopulation. Anyone who is especially interested should consult Bos et al. 2011 and 2012.