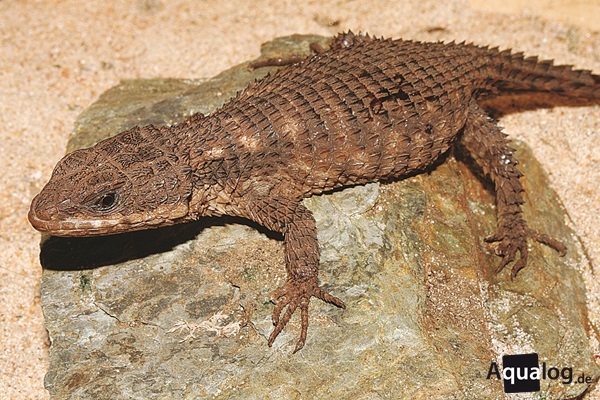 At present a small lizard is frequently being imported from Tanzania that is ideal for the beginner with a serious interest in the terrarium hobby: Cordylus tropidosternum, the Dwarf Girdled Lizard.

As with all things in life, much is possible in the terrarium hobby and it is primarily a matter of taste. The majority of reptile keepers maintain only a few individuals as they are usually interested in the personalities of their pets. They are well provided with pets among the reptiles, including the bearded agamas, the European tortoises, the leopard geckos, and the corn snakes. There is copious literature available on these animals and anyone who can read won’t have any difficulties with these creatures apart from the normal vicissitudes of life. But there are also naturalists among terrarium keepers, people who like to study the life history of their pets and learn more through observing them in the terrarium, thus gaining deeper insights. Anyone who wants to take that path will find the Dwarf Girdled Lizard an ideal beginner’s reptile. These lizards do not pose any excessive demands and are relatively easy to breed.

The family Cordylidae, the girdled lizards, currently contains 55 species in 3-4 genera. One genus, Chamaesaura, with 3 species, contains almost legless lizards that look similar to our European Slow-worm. Cordylus contains 37 species. In the past Cordylus and Pseudocordylus were regarded as distinct on the basis of the scalation on the nape and dorsum. But recent authors no longer regard Pseudocordylus as a separate genus, and the species it formerly contained are nowadays assigned to Cordylus. And finally there is the genus Platysaurus with 15 species.
Of the numerous species of the genus Cordylus, at present only C. tropidosternum plays a noteworthy role in the trade, while the Giant Girdled Lizard, C. giganteus, remains rare and sought-after. All the many other species are practically unknown in the terrarium hobby. 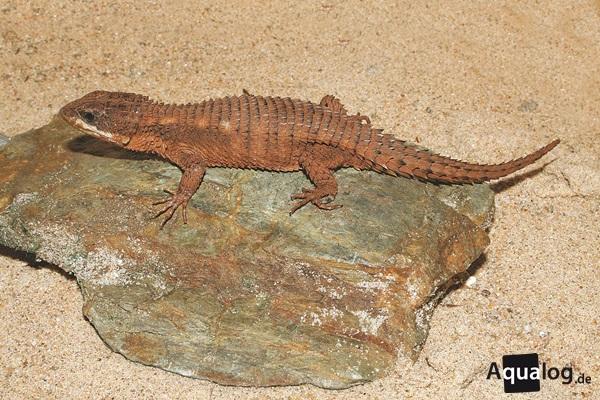 This species is rather widespread in southern Africa and occurs in the south east of Kenya and across Tanzania, northern Zambia, and Katanga Province in the D.R. Congo, Malawi, Mozambique, and north-eastern Zimbabwe. The Dwarf Girdled Lizard is a steppe-dweller. Because these reptiles attain a head-body length of only around 10 cm and a total length of 18 cm, they do not require an excessive amount of space. In contrast to almost all other lizards the dainty Dwarf Girdled Lizards are completely peaceful among themselves. This applies even in the case of males. In fact it can even be concluded from the behavior of these lizards that they feel considerably happier in the company of their own kind than when they are kept singly or in pairs. They are then also appreciably less shy.
The Dwarf Girdled Lizard is a livebearing lizard. This makes it particularly suitable for the beginner, as the most difficult part of breeding lizards is invariably providing the female with suitable places to lay her eggs that are also acceptable to the lizards.

By day the temperature beneath the main heat source should be around 40 °C and about 30 °C throughout the terrarium, while at night the temperature can be allowed to drop to room temperature. It is important to have a cool phase of around 3 months, with around 25 °C by day and about 16°C at night. Dwarf Girdled Lizards are exclusively insectivorous. Food animals should be sprinkled with a calcium-vitamin mixture. A drinking-water bowl should always be available. These lizards can also take in water via their skin.
Anyone who has successfully tried Dwarf Girdled Lizards will have taken the first step along the road to becoming a terrarium keeper and may perhaps subsequently become involved with the less well-known members of the genus; you’ll have earned it in any case!
If you are now filled with the desire to keep and breed Dwarf Girdled Lizards then your pet dealer can undoubtedly order them for you from a wholesaler of his acquaintance, for example from Tropenparadies in Oberhausen, Fax 0049-(0)208-665997. 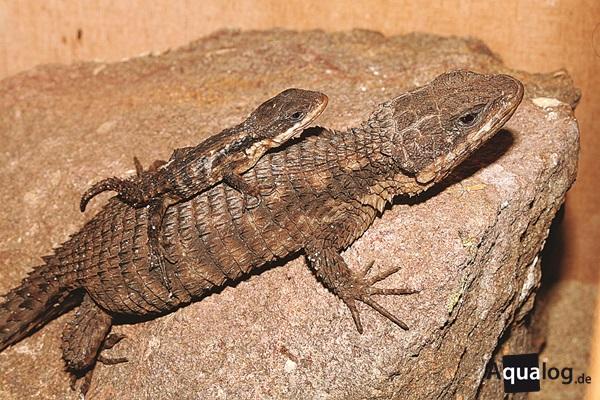