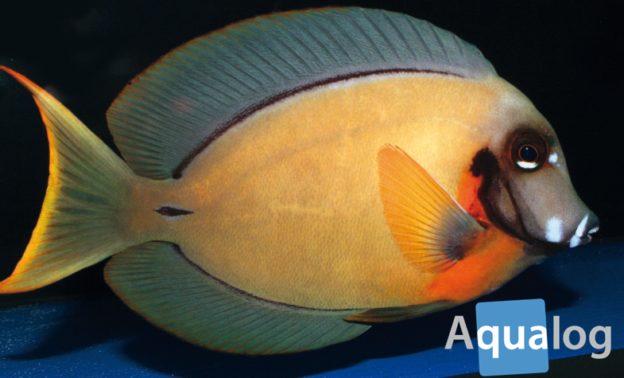 In biology the term mimicry denotes a phenomenon where two different species imitate one another. In other words, they look very similar or almost identical, but belong to quite different species. Mimicry is widespread in the animal kingdom and a very interesting phenomenon, the study of which would require longer than a biologist’s entire lifetime. Two species of surgeonfishes imitate dwarf angelfishes when juvenile. This is their story.
Surgeonfishes are very popular in the marine aquarium hobby. Most are brightly-colored fishes that prefer to feed on algae. For this reason some species are very popular for reef aquaria, where they keep nuisance algae in check. But they are fascinating to keep even in fish-only aquaria.

None of the 82 species, split between six genera, practices brood care. All species spawn in the open water, and the tiny eggs, less than 1 mm across, then float among the plankton, where the larvae develop as well. Surgeonfish larvae are transparent as glass and possess remarkable spines and appendages. These larvae are termed “Acronurus larvae”, as it was formerly thought that they were completely different fishes which were given the name Acronurus. Only later was it realized that they were simply the larvae of surgeonfishes. Up to a length of three to six centimeters the glassy Acronurus float among the plankton of the open sea and are transported around by the currents. Only after around 10 weeks do they develop coloration and then leave the plankton, from then on leading a bottom-oriented existence for the rest of their lives. The technical term is a benthic way of life, and is the opposite of a planktonic existence. The long planktonic phase explains why surgeonfishes usually have enormous distribution regions. 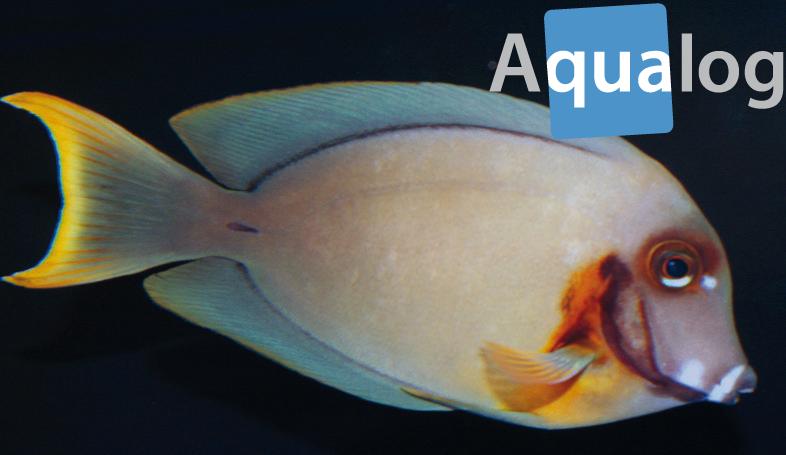 Juvenile coloration? – only rarely!
In many surgeonfishes, above all the smaller species, there is little or no difference between juvenile and adult coloration. But there are exceptions, for example the unicornfishNaso brevirostrisor the Eyestripe Surgeonfish,Acanthurus dussumieri; both species grow fairly large (around 50 cm), and we will be devoting a separate article to them shortly. There are also other surgeonfishes that may look considerably different to adults as juveniles, but in the vast majority of species it can be seen what they will look like later on. So it is all the more surprising that two species of surgeonfishes, known as the mimic or chocolate surgeonfishes, have an extremely deviant juvenile coloration confusingly similar to that of dwarf angelfishes. These two surgeonfish species are calledAcanthurus pyroferusandA. tristis. 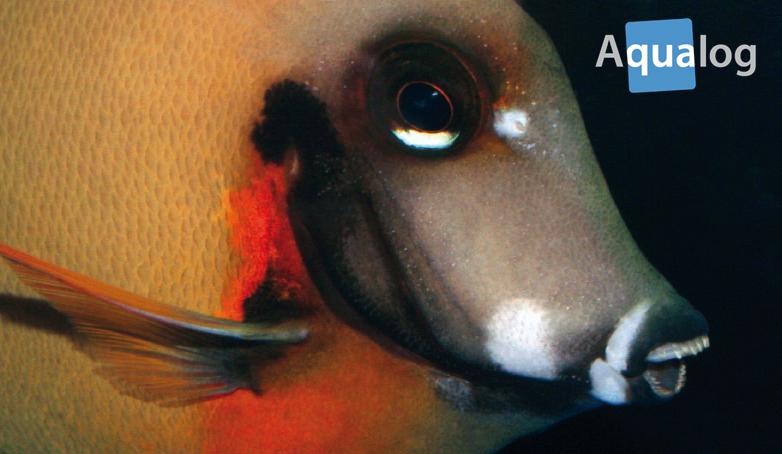 Who’s copying whom?
As adult fishes both surgeons look rather similar and until 1993 were assigned to the same species. Acanthurus pyroferus is very widespread in the West Indo-Pacific, while A. tristis is restricted to the Indian Ocean, where it is found from the Maldives and India to Bali. In parts of their distributions, at Bali for example, both species occur together.
Juvenile A. tristis look like the dwarf angelfish Centropyge eibli, while A. pyroferus actually resembles at least three different dwarf angelfishes: Centropyge flavissimus, C. heraldi, and C. vrolikii. In addition there is a juvenile color form of A. pyroferus that doesn’t resemble any dwarf angelfish species known to date (see Debelius & Kuiter, 2001: 37).
Now the first question is, who’s copying whom: the surgeons the dwarf angelfishes or vice versa? The question can be answered on the basis of two indications: the surgeons are imitating the angelfishes. First indication: A. pyroferus imitates several angelfish species. Second indication: the dwarf angelfishes retain their coloration life-long, while the surgeons undergo a fundamental change of coloration on becoming adult. 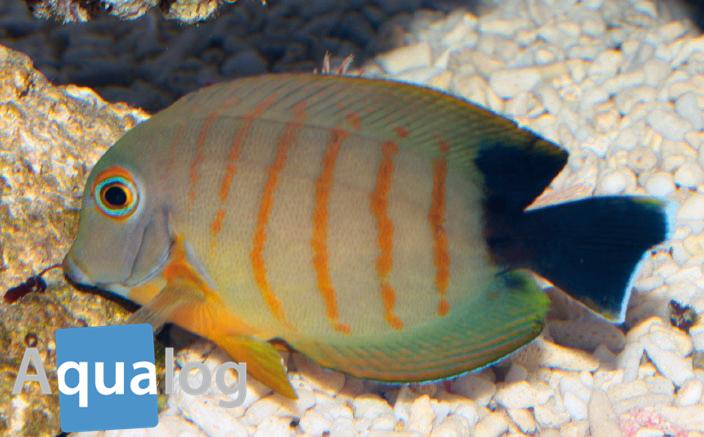 What is the purpose of the mimicry?
At first glance the mimicry by the surgeonfishes appears pointless, as dwarf angelfishes are not poisonous or dangerous in any other way. So the mimicry isn’t the type exhibited by, for example totally harmless hoverflies that imitate venomous wasps or bees. In addition, both types of fishes – surgeons and dwarf angelfishes – have similar feeding habits. Both feed on biocover, with the dwarf angelfishes also consuming a certain amount of plankton as well. The dwarf angelfishes live in harems consisting of a male and one or several females, with dwarf angelfish males reacting territorially towards conspecifics. A mimic surgeonfish must thus reckon on being attacked by one of the fishes it is imitating. 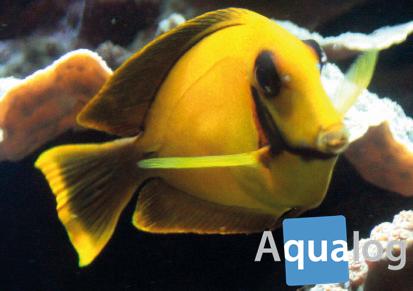 So why go to the trouble?
The answer to the puzzle appears to lie in the life history of the dwarf angelfishes. Their spawning behavior by and large resembles that of the surgeonfishes: the eggs and sperm are released into the open water, and the larvae develop among the plankton. But – and here we come to the decisive difference – dwarf angelfishes metamorphose into reef-dwelling fishes a lot earlier and at a length of around two centimeters. There is no real juvenile coloration in dwarf angelfishes, some species have an eyespot (ocellus) thatadults lack, but that is all.
Dwarf angelfishes are among the cleverest reef-dwellers and disappear like lightning into their hiding-places if something doesn’t seem right. The advantage of the mimicry for the surgeons lies in the fact that the predatory fishes in an area where dwarf angelfishes occur rapidly learn that there is very little point in hunting these nimble fishes. So when the appreciably less nimble surgeonfishes arrive on the reef at a length of around four centimeters, they benefit from the fact that piscivores don’t waste energy on hunting them, as the predators “believe” them to be relatively old and correspondingly savvy dwarf angelfishes. Fascinating, isn’t it? 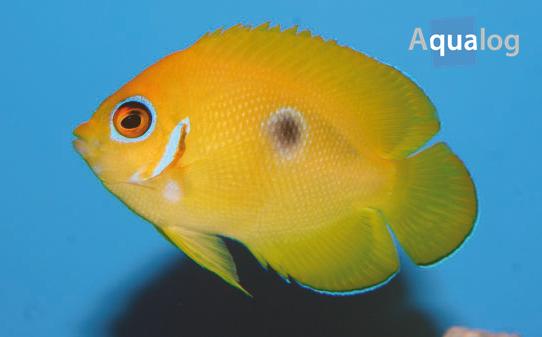 In the aquarium
Both the mimic surgeons and the dwarf angelfishes are outstanding aquarium fishes. The dwarf angelfishes should be kept in pairs or in a group, and grow to around 8 cm long. The mimic surgeons attain a maximum length of around 20 cm, and so likewise don’t grow too big. They are particularly fond of eating the slimy diatomaceous algae usually spurned by other fishes. If they are well fed then adult mimic surgeons can also be kept in pairs, as it is only when they are kept short of food that they behave aggressively towards conspecifics. With adult surgeons the best approach is to introduce two individuals of clearly different sizes at the same time.
Acanthurus pyroferus in particular is an impressive fish when adult. Because too little is often fed in reed aquaria in deference water quality, it is recommended that large mimic surgeons should by preference be maintained in fish-only aquaria, where pollution of the water plays a subordinate role. Here the mimic surgeons can be fed all sorts of artificial foods without problem.
It isn’t possible to tell which dwarf angelfish an adult Acanthurus pyroferus imitated as a juvenile. Determining how adaptation to the different dwarf angelfish species works remains an interesting field of research. 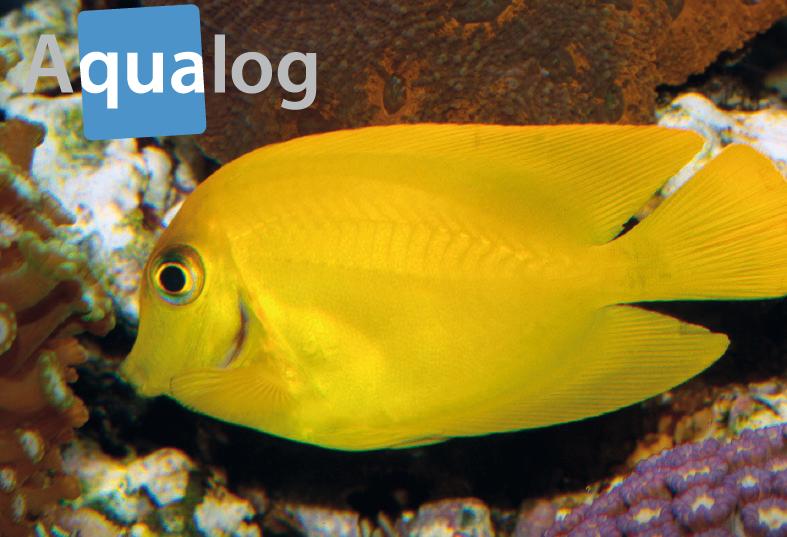