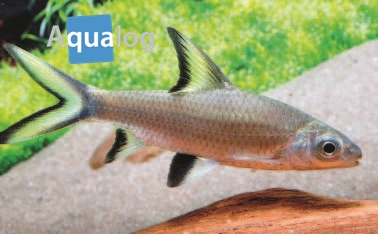 The Bala Shark
Our aquaria contain lots of fish species that owe their continued existence on this planet to their importance as ornamental fishes, and which are extinct or presumed dead in the wild. These species include the Bala Shark,Balantiocheilos melanopterus.
It is unknown why the Bala Shark is so endangered in the wild. A book on the endangered fauna of Thailand asserts that overfishing for the aquarium hobby may be responsible for the decline in numbers, but there is no proof of any kind for this. On the contrary, it is a demonstrable fact that all the Bala Sharks currently in the aquarium hobby originate from captive breeding.

Two very similar species
Until recently (2007) it was thought that there was only one species of Bala Shark, namely Balantiocheilos melanopterus(the genus name is often spelled incorrectly with -us at the end). Then scientists Ng and Kottelat described a second species,B. ambusticauda. The two species cannot be told apart from one another as juveniles; only in adult specimens (B. ambusticaudagrows to 20 cm long,B. melanopterus35 cm) is there an obvious difference in head form (any one who is interested is referred to the original description ofB. ambusticauda). But differences betweenB. ambusticaudaandB. melanopterusin the coloration of the anal and ventral fins mentioned in the description are incorrect, as they cannot be seen in historic photos ofB. ambusticauda.
B. ambusticaudaoriginates (or used to) from the middle and lower Mekong and Chao Phraya basins (past imports came from Thailand), but the species is now regarded as most probably extinct.B. melanopteruscomes from Malaysia, Borneo, and Sumatra, where populations are in dramatic decline. All aquarium stocks since 1980 have been captive-bred and derive from fishes originally imported from Indonesia.
The first importation of the Bala Shark to Europe took place in 1955 via the Tropicarium in Frankfurt, and the species is first mentioned in the magazinesAquarien-TerrarienandDATZin 1959. But these early reports of importations all probably relate toB. ambusticauda.
Bala Sharks are large, peaceful fishes that are splendid occupants for larger community aquaria. It should never be forgotten that they owe their survival to their commercial relevance. It is thus important that the species should continue to be traded extensively in order to remain of interest to commercial