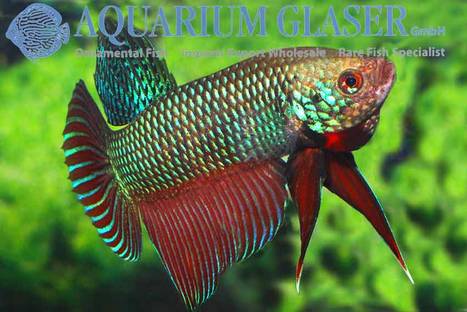 We obtained splendid wild collected Betta smaragdina from Thailand. The males can compete in any respect with their domesticated cousins of Betta splendens. Depeding on the light the scales shimmer in a rather greenish or blueish emerald. The fighting behaviour between the males is not as intensive as between Betta splendens males, but nevertheless Betta smaragdina are fish of temperament! 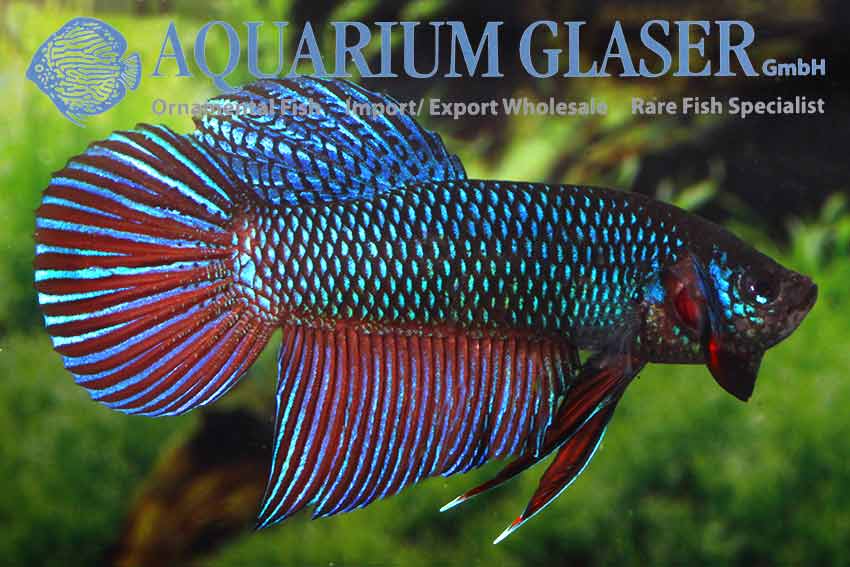 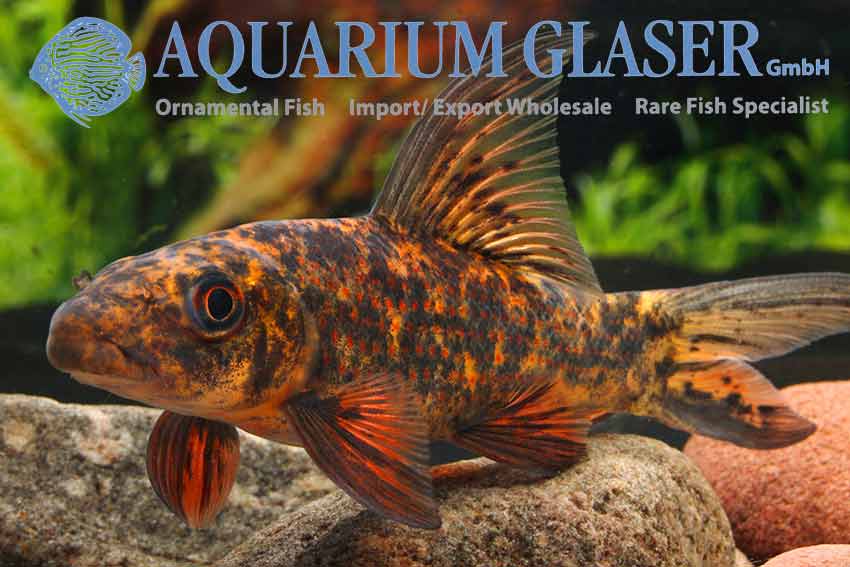 After a long time we were able once again to import this beautiful species of Labeo from the Congo. Scientifically speaking, the name “variegatus” is regarded only as a synonym of Labeo cyclorhynchus nowadays. However, it is pretty difficult to substitute a well known name – like Labeo variegatus – in the aquarium hobby by a new one. The checkered variety of Labeo cyclorhynchus (we exclusively have these fish in stock) occurs in the wild, but bears no scientific name on its own. It is maybe best compared with the so called OB-morphs in Mbuna cichlids from Lake Malawi. The “normal” variety of Labeo cyclorhynchus is hardly ever imported, so we have to show you here an elder picture from a former importation for comparison.
Labeo cyclorhynchus becomes about 16 cm long. Like all Labeos these fish are quarrelsome against conspecifics, but especially L. cyclorhynchus is regarded to be quite peaceful against other species of fish. Usually this species has long, sickle-shaped dorsal fins. But one of our specimens has a “normal”-shaped dorsal fin. This possibly is a sexual dimorphism. Possibly the “Variegatus”-morph is most often linked to male specimens? So far nobody knows this… 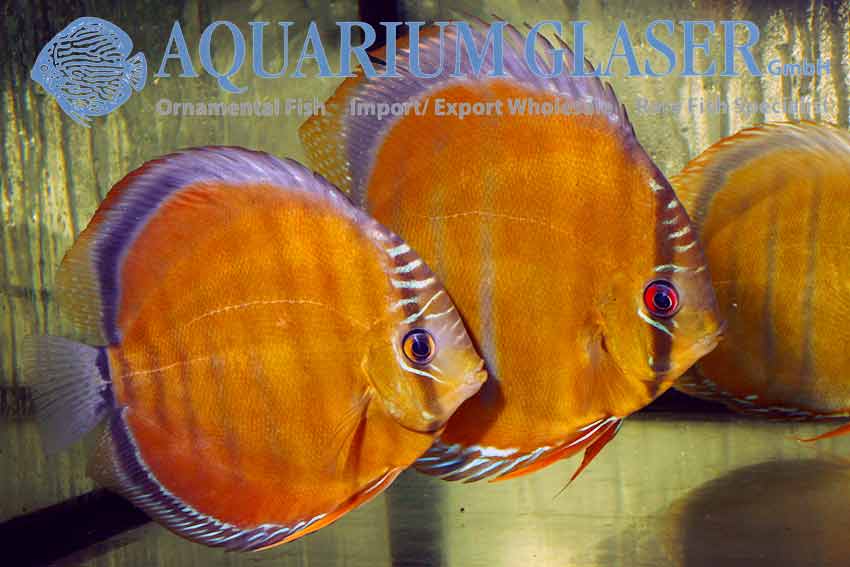 Actually, it is not the high season for wild collected discus. Nevertheless we obtain now and then wonderful specimens. Currently we could import Brown Discus from Cametá situated at the Rio Tocantins. The graceful animals, which have perfect proportions, show a high degree of red coloration. 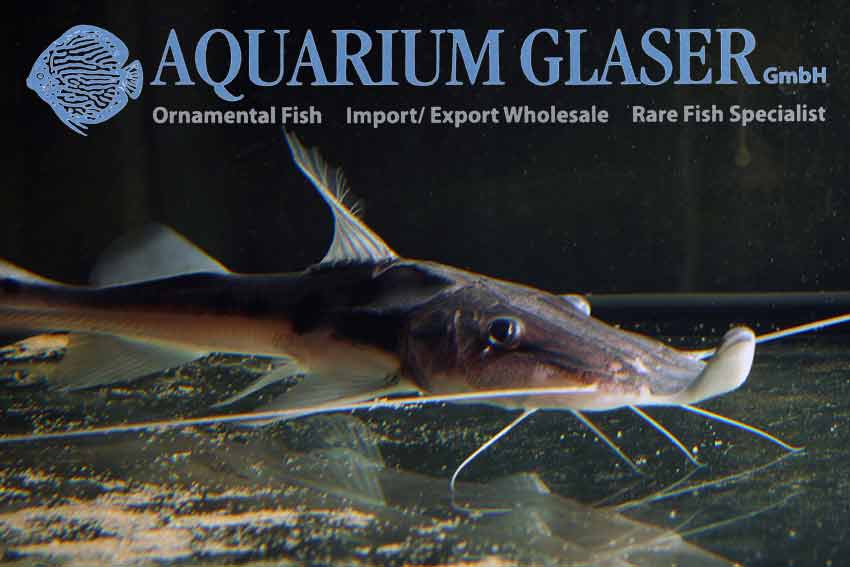 Finally we are able again to offer one of the most bizarre species of predatory catfish of Amazonia: Platystomatichthys sturio. Anyone who sees the fish for the first time will think that the animal is distorted; however, the upturned snout-tip is rather species-specific. Nevertheless the grade of this upturn differs individually and depends also a bit from the age of the animals. The maximum length of the species, which has a very wide distribution in Amazonia, is about 40 cm.
The sense or the reason of this upturned snout-tip are unknown. The species has extremely long barbels and prefers to swim against a strong current. Maybe the snout-tip helps to localize the prey or it may have a similar function as the spoiler of a car and helps so save energy while swimming against the current. There is also a lot of speculation that this upturned snout-tip is an artefact from keeping the fish in aquaria and resuls from swimming against the glasses of the tank; however, this sounds quite unlikely, for first of all allmost all – even very small – specimens can show this phenomenon and, twice, the species is not shy at all and tends not to panic and crash with anything.
Against conspecifics and other fish that are too large for prey, Platystomatichthys sturio are very peaceful. 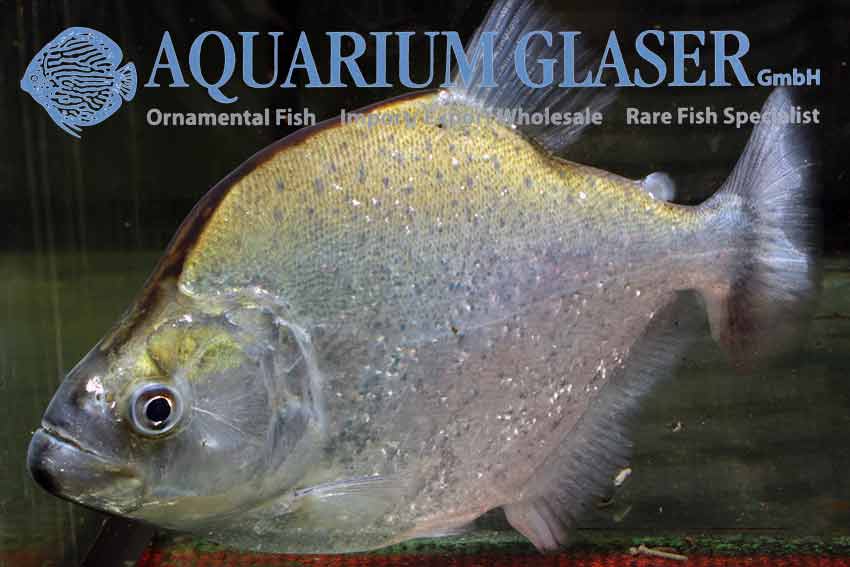 Once more we were able to import a real top-rarity: Serrasalmlus geryi. This species of piranha is restricted to the basin of the Rio Tocantins in Brazil. According to scientific literature this species becomes around 20 cm long. Thus our specimens that measure between 16 and 22 cm are most probably fully gown already. This piranha is unmistakable due to its reddish-brown stripe over the head and parts of the back. S. geryi is a solitary living fish that feeds in the wild mostly on fin pieces, but accepts readily small pieces of fish as food in aquaria.