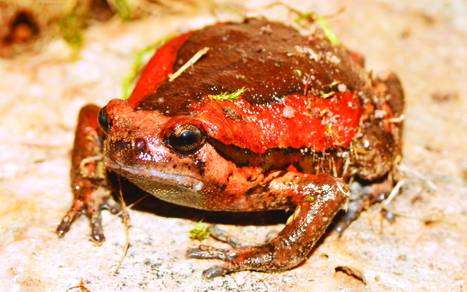 It bellows like an ox, it’s shaped like a bubble, it’s got a wide…or a narrow…mouth,it can inflate and deflate its body at will,and is native to Singapore…or not! This remarkable creature is the banded, ox, rice, piebald digging, chubby, bubble, Asian painted, Malaysian narrow-mouthed frog or toad, or painted or Asian bullfrog, Kaloula pulchra.

When an animal has as many common names as this, the chances are that it is a widespread species. Kaloula pulchra is certainly such a species. Its broad natural distribution is given as Southeast Asia, South Asia and China, a vast area by any standards. In addition, it is reported as having been introduced into Taiwan and Guam, and (possibly) into New Zealand, Australia and Borneo. Some references suggest that it has also been introduced into Singapore. However, the World Conservation Union‘s (IUCN) entry for the species states that it is actually native to Singapore.

Along with nearly 415 species in some 69 genera, Kaloula pulchra belongs to the family Microhylidae (the so-called narrow-mouthed frogs), subfamily Microhylinae. As the family name implies, microhylid frogs are small (hence the ‘micro’), with some species only attaining 1.5cm in length. K. pulchra is one of the larger species, but, even so, only grows to around 7.5cm.
Although one of the stated characteristics of these frogs is their narrow mouth, some references say that K. pulchra has a wide mouth! This apparent discrepancy may be explained by the fact that there are two main body shapes within the family: species with narrow mouths (these tend to feed on small insects, such as ants and termites) and more ‘normally-shaped’ species which enjoy a more substantial diet. In several respects, K.pulchra falls into this second group (although it is also reported as eating ants in the wild), offering a possible explanation for the above-mentioned wide mouth.

Despite its small size, this species is the fourth most popular species harvested for human consumption in Cambodia, and is also consumed in some other countries within its range.The other ‘consumer’of K. pulchra is the pet trade, although the exact numbers collected are not documented. Nonetheless, despite these two forms of harvesting, the species is so abundant in the wild that the World Conservation Union lists it as being of ‘Least Concern’ and states that levels of harvesting “do not currently constitute a major threat”. In fact, it also goes as far as saying “it meets several criteria to be considered a vertebrate pest”.
In captivity, this species (which can live for around 10 years) will exhibit its natural habit of tending to remain hidden during the day. Therefore, shelters, plus a substrate that allows it to burrow should be provided. Leaf litter, potting compost (minus non-organic additives such as vermiculite), coconut husk and similar ‘safe’ substrates are suitable, as long as a deep-enough layer of, at least, 5cm is provided.The enclosure itself need not be particularly large, with a 60cm aquarium/terrarium with a tight-fitting lid being suitable for a pair. No special lighting is required, owing to the daytime burrowing habits of the species. However, a UVB source is recommended for health reasons, in addition to a ‘moonlight’ or night light for observation during the hours of darkness when these frogs are most active.
The temperature can fluctuate between approximately 27-28oC during the day, and around 20oC at night. Humidity should be maintained relatively high by misting the tank on a regular basis. It has also been noted that the level of activity rises with humidity; such conditions are usually associated with the onset of the breeding season in the wild. 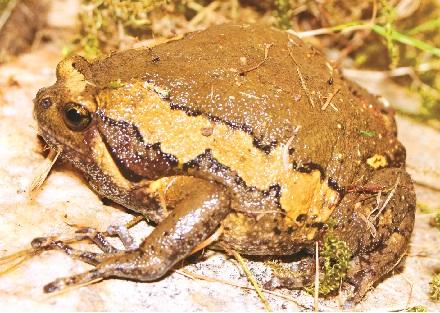 A bowl of water must also be included in the setup to allow the frogs to immerse themselves entirely. Rainwater or bottled water is more suitable for this purpose than chlorine/chloramine-containing tap water.
With respect to the diet, live insects, including mainstays such as crickets, will be eagerly consumed; so will a range of worms. All food should be sprinkled with appropriate mineral and vitamin supplements, though. Two or three feedings per week will be perfectly adequate for adults.
Despite their ease of maintenance, chubby frogs do not appear to have been bred in captivity. They are known to breed when the humidity and the moisture content of the substrate increase in the wild. However, despite this being replicated in captivity, we are still awaiting detailed documented records of captive breeding successes. 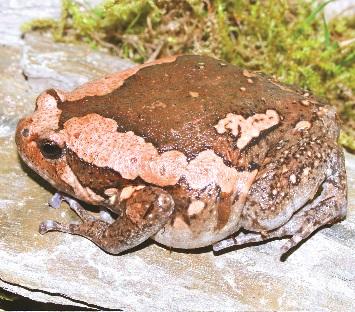