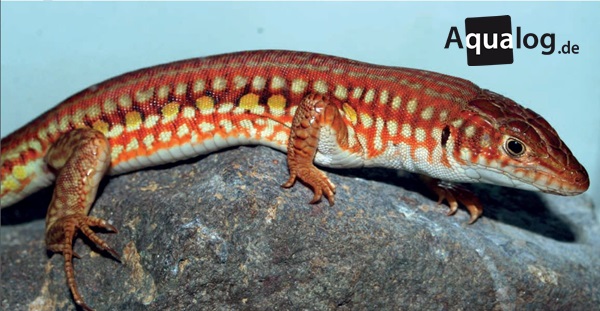 From the early days of the terrarium hobby around 1880 right up to the 1970s, the native lizards of southern and central Europe (Lacertidae) were among the animals most frequently kept in the terrarium. Then conservation legislation largely banned these lizards from the trade and they then gradually slipped into oblivion.

Unfortunately, however, the ban on trade did nothing to preserve populations of these lizards. On the contrary, nowadays more species are more greatly endangered than previously. The prophesy by all those reasonable people, who stated at the time that small creatures will never be endangered by direct persecution, but invariably only by biotope destruction, remained unheard but proved to be absolutely true.

One of the few lizard species that still turns up regularly in the terrarium trade is the Common Long-Tailed Lizard, Latastia longicaudata. The specimens currently available originate practically without exception from Tanzania.

The collared lizards
Before we look at Latastia longicaudata in more detail, a few words on its phylogenetic relationships are required. It isn’t so very long ago that the majority of the true or collared lizards of the family Lacertidae were called by the genus name Lacerta. All collared lizards (well, almost all, there are a very few exceptions but they are of no relevance here) share the common feature of a “collar” or neckband, a fold of skin between the scales of the throat and breast, with this fold itself usually covered with scales with a free posterior edge. At present 309 species are recognized (http://reptile-database.reptarium.cz), but new species are constantly being discovered.

In addition to the actual species, most have a number of subspecies. Don’t worry, we aren’t going to enumerate all the subspecies here as there wouldn’t be enough space for that in the whole of the News. But one example should be cited: the Common Wall Lizard (Podarcis muralis), which also occurs in Germany, has – depending on the author – evolved eight to 11 subspecies. It is in fact quite common for collared lizards to develop local forms. But it hasn’t been explained whether this is a result of their high reproductive rate, or whether collared lizards are simply undergoing an evolutionary thrust at the present time and are heavily involved in speciation.

Latastia longicaudata: coloration and distribution
In his monograph on the Lacertidae (1921), the brilliant systematist George Albert Boulenger wrote of Latastia longicaudata: ”The coloration varies enormously. The ground colour varies from pale grey to brown, reddish-brown or brick-red. Some specimens are handsomely marked with dark and light shades and spots or bars, others are of a pale greyish sand-colour, with all the markings much effaced. There may be four narrow light streaks on the upper surface of the neck and body, the outer proceeding from the superciliary edge, and two broader light streaks on each side, the upper originating behind the eye, passing above the tympanum, and extending to the base of the tail, the lower from the upper lip, passing through the tympanum and above the fore limb to the thigh, on the posterior side bf which it reappears and is continued on the base of the tail. These light streaks may be broken up into regular series of spots, either on the back and sides or only on the sides, where they may be separated by narrow blackish bars; series of black spots may run between them, as well as a series of blue, black-edged ocelli between the two lateral streaks, or they may be crossed on the back and sides by more or less regular, straight or wavy blackish bars. Very frequently there is a dark brown or black vertebral streak, extending from the occiput to the base of the tail, or disappearing or broken up into a series of spots on the posterior part of the body. In other specimens there is no trace of either light or dark longitudinal streaks, and the back is irregularly spotted or reticulated with brown or black, and the sides of the head, neck and body are barred with black and white or bluish grey. A dark band usually runs along the side of the tail.”

The Common Long-Tailed Lizard in the wild
There aren’t many reports on the life in the wild of this widespread and apparently also common species. There is, however, a very interesting study by Parker (1942), who worked on the lizards of British Somaliland (now the Republic of Somaliland and part of northern Somalia). He listed five subspecies for the region, but assumed that there were actually very many more, as the forms he studied could be distinguished ecologically and also in part by anatomical details. But Parker also suggests that all the forms merge into one another (the technical term is “intergrade”), an important defining character for subspecies. Leaving aside what the actual taxonomic status of these Somalian subspecies may be, Parker demonstrates very nicely how they are separated ecologically. Unfortunately it would require far too much space to summarize his work here. But on the basis of Parker’s work it can be stated that in Somaliland and Somalia Latastia longicaudata sometimes inhabits dry to very dry habitats and that the individuals in each habitat look different, partly in terms of their (always variable) coloration, partly in terms of scalation characters.

A terrarium for Latastia longicaudata
Experienced terrarium keepers will be aware that the maintenance and breeding of reptiles from desert regions usually involves considerably more problems than that of reptiles from rainforest areas. There are, of course, a number of very prominent exceptions to this rule (leopard geckos, bearded agamas), but a rule remains a rule, regardless of exceptions.

The reasons for the problems in maintenance and breeding are well known. In desert regions the lizards must constantly contend with considerable changes in conditions. The daytime temperature can rise to 50 °C and drop almost to freezing point at night. Drinking water is only rarely available in the course of the year, and then to excess. And the food supply is meager… These conditions can be reproduced to only a limited extent in the terrarium. A distinct drop in temperature overnight is very important for the successful maintenance of desert lizards like Latastia longicaudata. This can be achieved comparatively easily by turning off the lighting, which will usually result in a temperature drop of around 20 °C. The temperature should be around 45 °C beneath the main source of warmth in the terrarium, a heat lamp. The high light requirement of these lizards can be provided with fluorescent tubes and a UV lamp in the terrarium. HQI-lamps also provide good light, but aren’t particularly economical because of their high purchase price and not inconsiderable running costs.

A second point of enormous importance is the correct substrate. The majority of lizards from desert regions regularly bury themselves, partly for thermoregulation (to avoid greater heat), partly as protection from predators (at night), partly for moisture regulation. As mentioned, drinking water is only rarely available. But desert lizards can also take in moisture from the ground via their skin. Together with water contained in the food, soil moisture provides an appreciable part of the water requirement of the lizard. The substrate in the terrarium for Latastia longicaudata should thus be around 10 cm deep and consist of diggable material. The ideal is a sand-soil mix in the ratio 3:1 to 8:1, depending on the amount of clay in the soil. The soil will prevent burrows excavated from collapsing, the sand will prevent the entire substrate from compacting into a rock-hard mass. The ideal is soil from the upper layers of the ground as it will be rich in micro-organisms that will ensure the breakdown of droppings and urine so that the substrate doesn’t need to be changed for years. Any droppings visible on the surface of the substrate should be removed once a week. The moisture in the substrate should be arranged such that it is slightly (!) damp at the bottom, becoming increasingly drier towards the surface.

The Terrarium should include plenty of cover (branches, rocks, bark, tussocks of grasses), as these lizards don’t originate from sandy deserts.

The total length of the Common Long-Tailed Lizard is up to 40 cm, 30 cm of which is down to the tail. The terrarium should provide the lizards with plenty of room to move and ideally the bottom area will be no less than 100 x 50 cm for long-term maintenance. However, it can be sensible to acclimatize the lizards in smaller quarters, where they will lose their shyness appreciably more quickly and where it will also be possible to monitor them better.

Maintenance and breeding
Latastia longicaudata is not especially susceptible to disease if the important night-time drop in temperature is observed. These lizards are best kept in pairs, as males in particular can be quarrelsome among themselves. It is important always to introduce both individuals at the same time. Should a subsequent change to the population be necessary, then the terrarium should be completely re-arranged in order to avoid over-aggressive behavior on the part of the established individual, who will regard the terrarium as its private territory.

These lizards will eat all the usual living food insects, which should be regularly treated with vitamins. You can also offer sweet fruit (over ripe banana) occasionally, as some lizards like this. A water bowl won’t come amiss and should be refilled every day with fresh water. A water bowl containing dirty water is far more dangerous than an occasionally empty one.

In order to trigger breeding in Latastia longicaudata you should keep them somewhat cooler (use a weaker spot-lamp) and with a reduced lighting period (8 hours) for around three months (January-March) and then return the lighting period to 12 hours and raise the temperature. The clutch comprises 5-12 soft-shelled eggs. Incubation takes place outside the terrarium at 24-28 °C in a moist, breathable substrate (Vermiculite, Seramis, or the like). The young hatch after 8-12 weeks and often have bright red tails. It is reported that the eggs often hatch irregularly, that is a single clutch over a period of several days. And for this reason you should monitor the incubator daily, as the young, once hatched, need to be removed immediately so that they don’t damage the unhatched eggs. Rearing the young is usually problem-free, but they need to be kept somewhat damper than adults. Intraspecific aggression is only slight among juveniles, so they can be reared together until sexual maturity.

Outlook
At present Latastia longicaudata is regularly available and at a reasonable price in the pet trade. It would be nice if this situation was exploited by terrarium keepers in order to evolve breeding protocols for these lovely lizards. Because regular breeding and publication of the associated observations made could be very helpful in answering the numerous open questions regarding the systematics of Latastia longicaudata that cannot be clarified by field observations (for example the genetics of the coloration and the scalation characters).

If you are now filled with the desire to keep and breed Common Long-Tailed Lizards, your pet dealer can undoubtedly order them for you from a trustworthy wholesaler, for example Tropenparadies in Oberhausen, Fax +49 0208-665997. 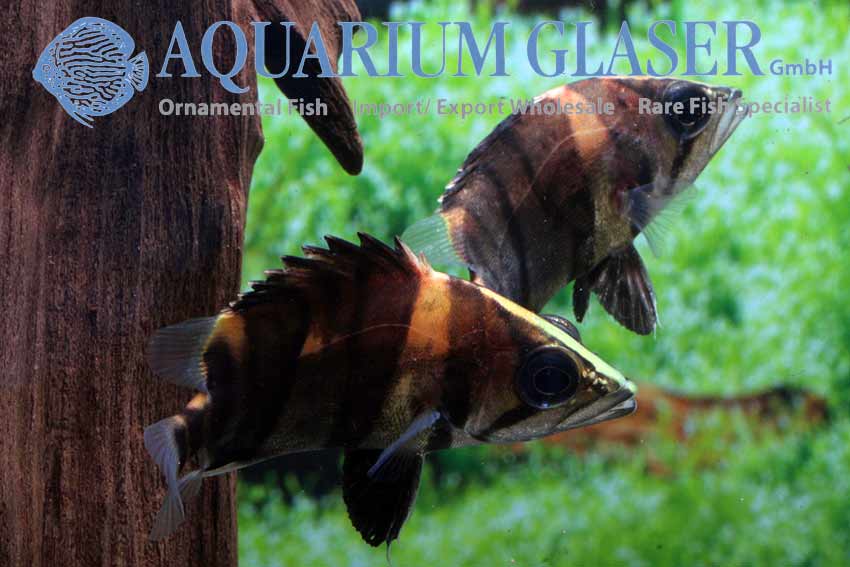