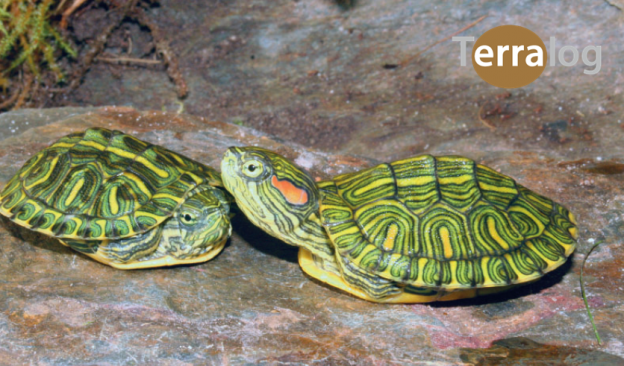 The Red-Eared Turtle is probably the best-known of the swamp turtles, though this turtle (sub)species has no longer been imported into the EU for many years. Much less well-known, but frequently available, is the closely-related Cumberland Turtle, Trachemys scripta troosti.

The reason for the fame of the Red-Eared Turtle (Trachemys scripta elegans) is that this gorgeous turtle is bred in vast numbers on commercial farms. The extremely cute little babies were sold as pets for very little money from the 1970s to the end of the 1990s.  Many buyers simply suppressed the thought that the cute little babies would one day grow into large adults requiring a lot of space, and as a result innumerable Red-Ears were released into the wild. To the present day such individuals can still be found in Germany. 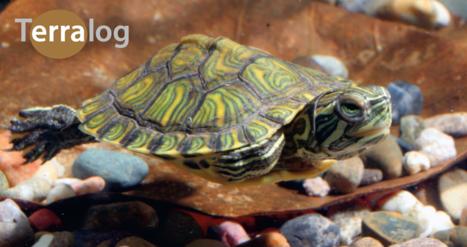 Release is a bad thing!
The release of unwanted pets has been strictly prohibited for decades – and with good reason!. It is completely immaterial whether it is dogs, cats, or turtles that are released.  It is wrong, because the released animal will either die a slow and painful death as it cannot find anywhere suitable to live, or it will survive and compete with the indigenous wildlife. And abandoned, feral dog will, obviously, hunt deer and hares and become a carrier of dangerous diseases. The situation is very similar when ornamental turtles are released and survive (though the majority don’t). It is true that there are no turtles in Germany for them to compete with (for various reasons the European swamp turtle has been practically extinct in Germany for 150 years), but just as dogs hunt game, a swamp turtle will hunt newts, frogs, and other animals and plants that already have more than enough to contend with in our orderly cultivated landscape. This really must be avoided! 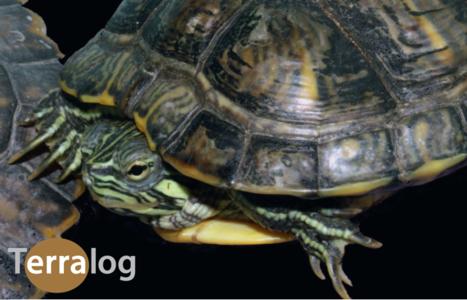 Bad legislation
Animal shelters and similar institutions generally have little use for adult swamp turtles, as these animals are unsuitable as pets. They are terrarium animals and belong in the hands of genuine terrarium keepers, not those of children. But while nobody ever dreamed of banning people from keeping  and breeding dogs and cats because every year thousands of them end up in animal shelters, in the case of the Red-Eared Turtle the terrarium enthusiast was published in short order for the irresponsible behavior of non-enthusiasts, and the importation of Red-Ears quite simply wasn’t allowed any more. It isn’t forbidden to keep Red-Ears, but importation into the EU?requires a permit and such permits quite simply aren’t granted. At the same time there is a simple solution to the problem: all that is required is to establish a minimum size  at which these turtles can be sold. In that way serious terrarium keepers could obtain Red-Ears but the spontaneous purchase of babies would  be prevented.

The Four-Inch Law
The practice of banning the sale of turtles of less than a certain size (for example 10 cm) has long existed in the USA, albeit for totally different reasons – Salmonella infections where small children were allowed to play with baby turtles. The children were putting turtles in their mouths and falling ill, albeit rarely in comparison to Salmonella infections from foodstuffs.  So they devised the ”Four-Inch-Law”, a law that prohibits the same of live turtles with a shell length of less than 4 inches (= 10.2 cm). Leaving aside Salmonella (there is no real danger of this from  turtles as long as minimal standards of hygiene are maintained) turtles are fundamentally unsuitable as pets for small children and so the ”Four-Inch Law” has also had a positive effect in that maltreatment of turtles by small children has also been prevented.

A European solution
Instead of simply adopting the tried-and-tested US legislation on the Red-Ear (and all other swamp turtles), in Europe they came up with a trick and arranged for the Red-Eared Turtle to appear on the list of ”endangered species”. Fortunately that is utter nonsense, the Red-Ear is not endangered and certainly not by the trade, because, as already mentioned, it is a question of exclusively captive-bred stocks.  But in that way they were easily able to prevent the unwanted importation of these animals, because a species on the ”endangered” list requires a permit to be imported alive into the EU.

This ”European solution” has (not for the first time and quite certainly not for the last) made a complete laughing-stock of the authorities. Because, firstly, it has simply resulted in the demand for baby turtles being satisfied  by other species, which are now being released instead of Red-Ears; and secondly this piece of imbecility makes it difficult for people working in nature conservation to catch released turtles and pass them on to interested terrarium enthusiasts. Because what wasn’t taken into account is that the people involved in drafting conservation legislation aren’t biologists but officials. They haven’t the first idea of why an animal species is listed as “endangered” and the majority of them believe that the Red-Ear and the American Bullfrog (Lithobates catesbeianus, formerly Rana catsesbeiana, which presents similar problems) actually need to be protected in the wild – ultimately such species are strictly or specially protected under federal conservation legislation. In the final analysis the listing of the Red-Ear and the Bullfrog is a misuse of legislative powers by politicians, who act as if we were living in a feudal system rather than a democracy, and the results are morally highly questionable. Whether or not trade restrictions contribute to species conservation remains a matter of debate in each individual case. But it is extremely disturbing when generally accepted laws, designed solely for the purposes of conservation, are misused for power politics and populist purposes.

The alternative subspecies
Because Red-Ear babies can no longer be brought into the EU, the trade has turned its attention to other turtles. These are mainly two further subspecies of Trachemys scripta, namely the Yellow-Eared Turtle (T. scripta scripta) and the Cumberland Turtle (T. scripta troosti). Both are again bred on farms. All the subspecies of Trachemys scripta are distinguishable only on the basis of head pattern. In the Red-ear there is a broad, horizontal, bright orange-red band behind the eye, in the Yellow-Ear a yolk-yellow vertical band. In the Cumberland Turtle the band is horizontal but yellow and much narrower than in the Red-Ear. Even so the Cumberland Turtle has been regularly incorrectly identified as a “faintly marked” Red-Ear.

Subspecies – what does that actually mean?
Until the 1970s the term subspecies was used rather indiscriminately. A form would be called a ”subspecies” if it was thought that it was a geographical variant of an otherwise very similar, already known species.

With advances in our knowledge of species this poorly-defined concept  has met with some opposition. Nowadays there are zoologists who  completely reject the term subspecies and speak exclusively of species. But that doesn’t accord with the situation in the wild, as an important characteristic of subspecies is that mixed populations occur where the distributions of two subspecies meet, and in such places individuals resemble neither one subspecies nor the other, but have characteristics  somewhere in between the pure subspecies. Such populations are termed intergrades and their existence supports the classification of the main populations as subspecies. Only if the zone of contact ceases to exist – for whatever reason – and geographical isolation of the main populations results, is there any justification for describing them as separate species. Ultimately this is the way in which species have evolved since time immemorial in the course of evolution. Usually, at any rate.

Keeping the subspecies pure
In the terrarium hobby the object of keeping animals isn’t so much one of social contact with other life forms, as amphibians and reptiles are  spiritually too distant from us humans. Anyone interested in owning a pet would be better off with a dog or a parrot, even though some large lizards occasionally become really nice pals. But never swamp turtles. Anyone who is interested in swamp turtles will get their enjoyment from watching their charges grow and thrive, in much the same way that it is enjoyable to see a plant grow and thrive in the garden or on the windowsill. A nice side benefit of this observation is that you learn a lot about the creatures that you keep. You get to know their special characteristics and their life history, develop an interest in their natural environment, and so on. Only in this way can someone become knowledgeable about the conservation of animals, species, and the environment, and not by coming up with esoteric theses without having the faintest idea about the animals themselves.

Because all swamp turtles are constantly in danger of becoming subject to ban on their importation or even their maintenance, we need to make an increased effort to breed them. In so doing it is important to keep the subspecies separate and pure-blooded, as only in this way can we ensure that pure-strain stocks will be available in the future for scientific study in the terrarium.

Maintenance of the Cumberland Turtle
The object of this article is not so much to go into maintenance and breeding as to highlight the problems linked with the trade in swamp turtle  babies. Even so a number of basic hints on their care  will not go amiss here.

Anyone interested in these turtles should start by obtaining a handbook on them and studying it in detail. The nest step is to acquire a group of juveniles of the desired species or subspecies. Juveniles always get along well together. Because it isn’t possible to tell the sexes apart in hatchlings, purchasing five, or better ten youngsters is the surest way to obtain both males and females. It is often difficult to get hold of suitable individuals later!

The situation is somewhat different if you are able to buy stock from a breeder, as the sex of the hatchlings can be controlled to some extent by the incubation temperature of the eggs. But this too works only up to around 90% of the time. It should also be borne in mind that if these turtles are maintained as Nature intended then they require 6-8 years to attain sexual maturity. That is a long time, during which you may lose one or more individuals due to accident or disease. This is another reason to buy a sufficiently large starter group.

Swamp turtles are active swimmers, so the rearing tank for the first two years should have a bottom area of 80-120 cm x 40-60 cm. The water depth should be 15-20 cm, with another 40-50 cm of air space above. The large air space is required because these turtles need a heat lamp above the land area. A source of UV light should also be provided, and in addition these turtles require a brightly illuminated tank. The water area doesn’t need additional heating in the living-room but should be well filtered. It is essential to ensure that the filter inlet is shielded so that the babies can’t be sucked in. Air-powered filtration is best.

Adult swamp turtles require really large aquaria of at least bath-tub size  and a land area to match. If possible they should be kept outdoors from the end of May to the end of September. Permanently high temperatures and too rich a diet lead to far too rapid growth, which will have consequences for the turtles later and often leads to premature death. So even when they are kept indoors you should regularly simulate periods of bad weather and use only food designed specially for swamp turtles. with a vegetable component appropriate to their age.