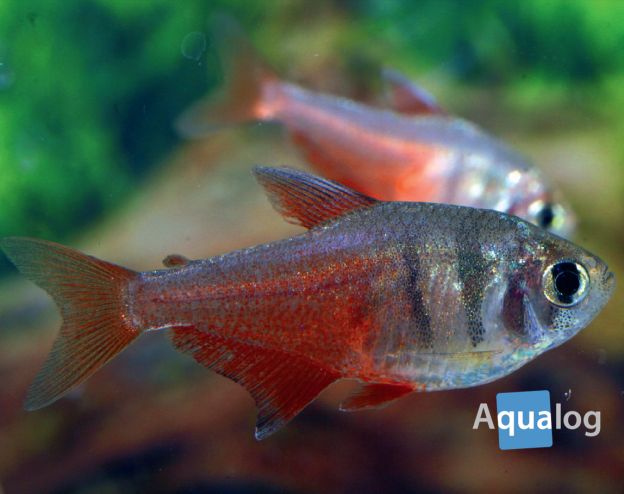 The Flame Tetra (Hyphessobrycon flammeus) is one of the commonest
fishes in the aquarium trade. It has been bred in the aquarium for a good
100 years. But only a very few people know that the species is seriously
threatened with extinction in the wild.

The first Flame Tetras were exported to the USA in 1920. Initially these fishes were identified as Hyphessobrycon bifasciatus, the Yellow Tetra, but in 1924 the American ichthyologist George S. Myers established that they were a species previously unknown to science and described them as Hyphessobrycon flammeus. The specimens used for the original description were in fact tank-bred fishes. It wasn’t until 20 years later that Myers tracked down this species in the field and found that it occurs only in the vicinity of Rio de Janeiro. Myers found it in streams in small areas of woodland, with the water in these streams being either deep brown or clear.

Rare in museums
Strange though it may seem, this little fish – the species is one of the smallest tetras and grows to only 2.5-3 cm long – is found in hardly any of the museums of the world, at least not in the form of wild-caught material. And yet it is one of the commonest ornamental fishes worldwide, with countless millions of these colorful, problem-free tetras having been bred. Nowadays most are bred in South-East Asia, but there are also commercial breeders producing the species in Europe and the USA. It appears highly doubtful that any additional wild-caught Hyphessobrycon flammeus have found their way into the international aquarium trade since those first exports in 1920.

Is the Flame Tetra already extinct?
The last scientific records from the region around Rio de Janeiro date from 1972. Since then the species has not been reported from the area again. But that doesn’t mean it is already extinct.
Hans-Georg Evers, a seasoned traveler in Brazil, experienced aquarist, and fellow editor (he is Chief Editor of Amazonas) wrote to me as follows: ”In the course of some 10 trips during the 1990s I searched for Flame Tetras in every possible biotope in the federal state of Rio de Janeiro. They are inhabitants of blackwater pools. But I found them just one time; I must check if I still have any details. I think it was round about 2000. The species has definitely become very rare because of habitat destruction. That applies equally to other endemics in that neck of the woods. Further south the species has already been replaced by H. reticulatus and H. griemi, which are colonizing such habitats. Unfortunately Nannostomus beckfordi was introduced a few decades ago, and that too may have made life difficult for the Flame Tetra.
Further north, towards Espirito Santo, there are no swamps, it is much drier there. So to answer your question: yes, extremely endangered. Helmut Stallknecht has maintained his strain for more than 40 years. Other older aquarists have had these fishes just as long. I don’t think there was ever any injection of fresh blood. I didn’t collect any specimens back then as it was at the start of the trip and I only wanted to know if they were still there.
Nowadays the fishes in the hobby bear little resemblance to wild specimens where intensity of coloration is concerned. I really must see if I can find a slide anywhere. I only remember that it was a foul-smelling mire and I was the only one pig-headed enough to go into it.”

New locality discovered
Since 2004 the Flame Tetra has been regarded as an endangered species in Brazil and protected, although its protected status is worthless without effective biotope conservation. In 1977 a location for the Flame Tetra was suddenly discovered in the fairly well studied upper Rio Tiete region, where these fishes are apparently very numerous and regularly included in scientific collections. The most recent of these was not long ago – 2011 – and there is no indication that the populations of the Flame Tetras in the upper drainage of the Tiete are in decline. Unfortunately, however, these populations probably derive from introduced aquarium specimens – a very great shame.

Preservation essential!
The example of the Flame Tetra demonstrates very clearly how important it can be for us to maintain our aquarium strains. Even though this type of conservation breeding is not without its problems due to gene-pool impoverishment, it is always better to preserve a species in captivity than to let it disappear forever and irrevocably from our planet.