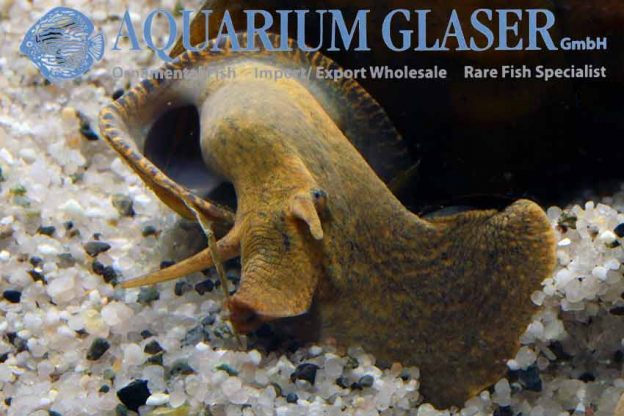 Whoever is on search for a large and easy-to-keep freshwater snail should try the up to 10 cm longBrotia herculea. Aquarium Glaser recently received this species from Thailand. The animals are relatives to the famed red-rimmed melania (Melanoides tuberculata). But Brotia herculea hardly ever burrows itself in the soil. In Brotia males and females exist. Sadly it is impossible to tell the sexes apart. So anyone who is interested in breeding this animal should buy a number of them to ensure that both sexes are included.

Brotia herculeais a livebearing species. The juveniles are very numerous and very tiny. Breeders found between 60 and 100 babies from one offspring. Obviously these snails breed only twice or three times per year and have still a kind a breeding season. For rearing the youngsters an old, long-time running “dirty” tank fits best, otherwise one has to face a lot of losses. B. herculea becomes fertile at an age of about two years in aquaria. Then they are about 6 cm long. Brotia herculea feeds a lot. One can offer a broad variety of vegetables and food tablets for ornamental fish. Some aquarium plants are also eaten. It seems that individual preferences exist. If the snails are fed properly they usually leave aquarium plants alone. 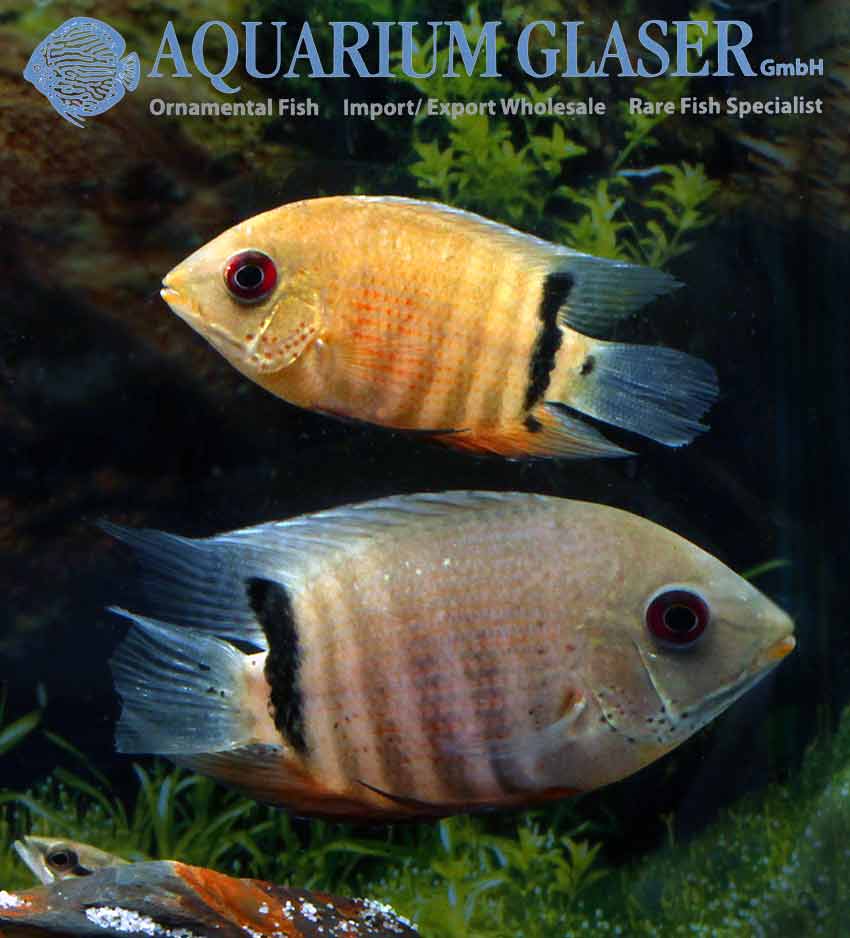 Many aquarists know this beautiful cichlid by name, but it is only rarely found in the trade. Wild collected specimens are even rarer. Aquarium Glaser currently received wild collected specimens from Venezuela. They just start to differentiate sexually and are 7-10 cm long. Eye-spot cichlids can become as large as 20 cm. They are comparatively peaceful fish and do usually not destroy the aquarium plantation. 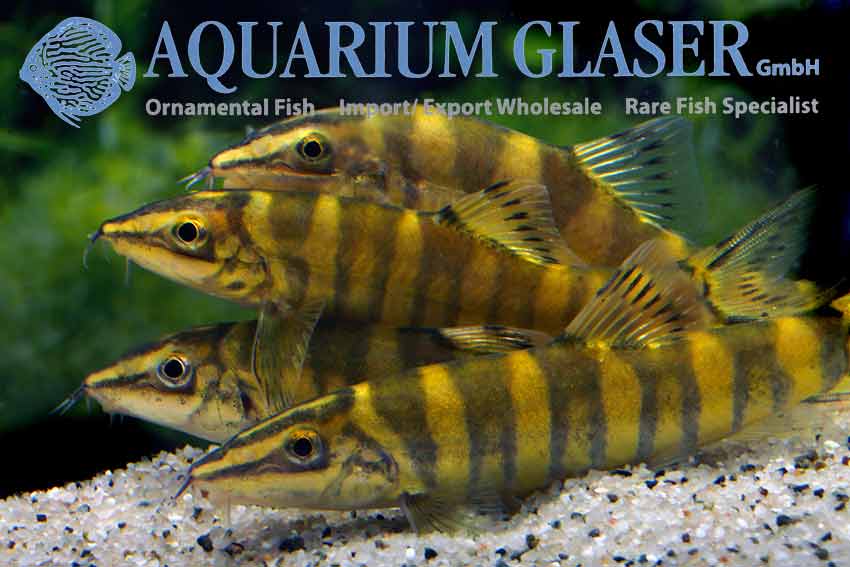 Every June is import season for Botia-like loaches from China. The genus Sinibotia currently contains six species. The genus Sinibotia differs from Botia by the presence of three pairs of barbel (two maxillary, one mandibulary), while in Botia a fourth pair of barbels is present on the lower lip. Sinibotia robusta is also known as the Kansu loach. This comparatively peaceful species is best kept at room temperature (18-24°C) without an additional heater. Maximum size reported for that species is about 18 cm, but in the wild most specimens become only 8-10 cm long. 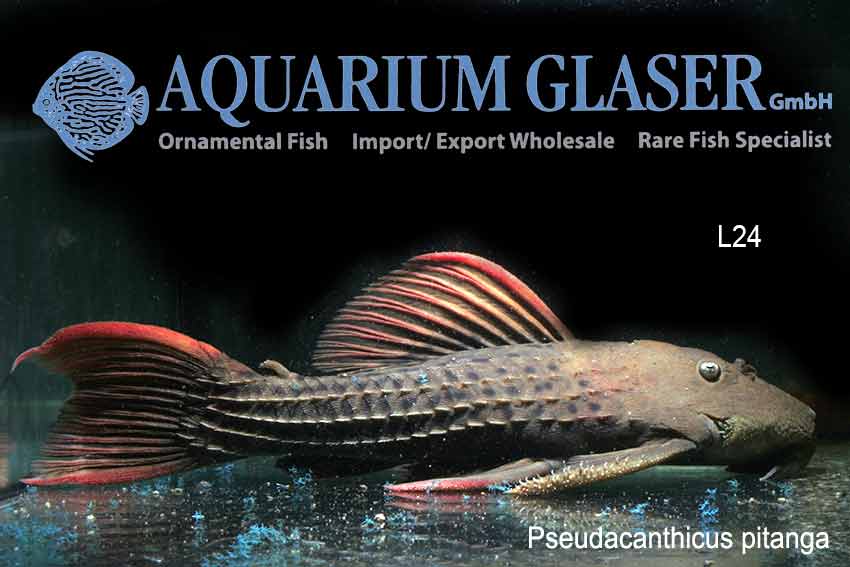 Another L-number has received a correct scientific description finally: L24. The beautiful orange finned cactus pleco from the Rio Tocantins is named now Pseudacanthicus pitanga. The specific name “pitanga” is from the Tupi-Guarini language and means “red” in allusion to the colour of the fins.The scientific paper also discusses the risks of using this fish for the ornamental fish industry. The scientist states that this kind of use is no danger for wild populations. The only real danger for Pseudacanthicus pitanga are hydroelectric dams that change the water body in a way that it is destroyed for fish that are specialized in fast flowing waters, like L24. However, due to the very wide distribution of P. pitanga in the Tocantins the species is currently not endangered at all. 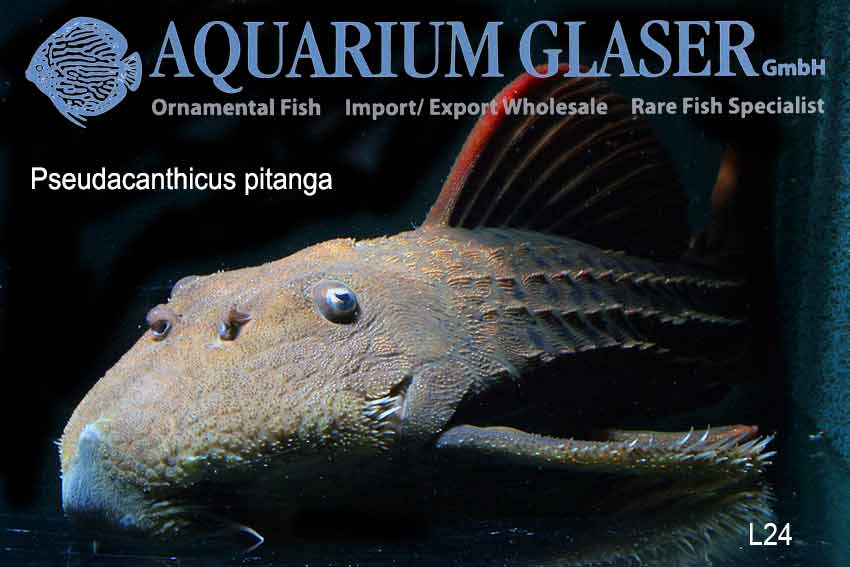 This beautiful “freshwater shark” reached Aquarium Glaser from India. Formerly the species was placed in the genus Arius. Like all these Arius-relatives Nemapteryx nenga is not a shark at all, but a catfish. N. nenga attains a length of about 30 cm and should be kept in large aquaria only.

These “freshwater sharks” are animals that live in the mouths of large rivers. So they can live as well in pure freshwater and in pure seawater. We recommend to keep them in brackish water with a salt content of 5-10 grams per liter.

Due to the nicely shaped dorsal fin the popular name “whimple freshwater shark” could be used. As far as it is known all species of the Arius-relationship are mouthbrooders. The eggs are taken by the male in the mouth until they hatch. One should keep these pretty catfish always in groups (5-10 specimens). Singly kept specimens do not thrive very well. 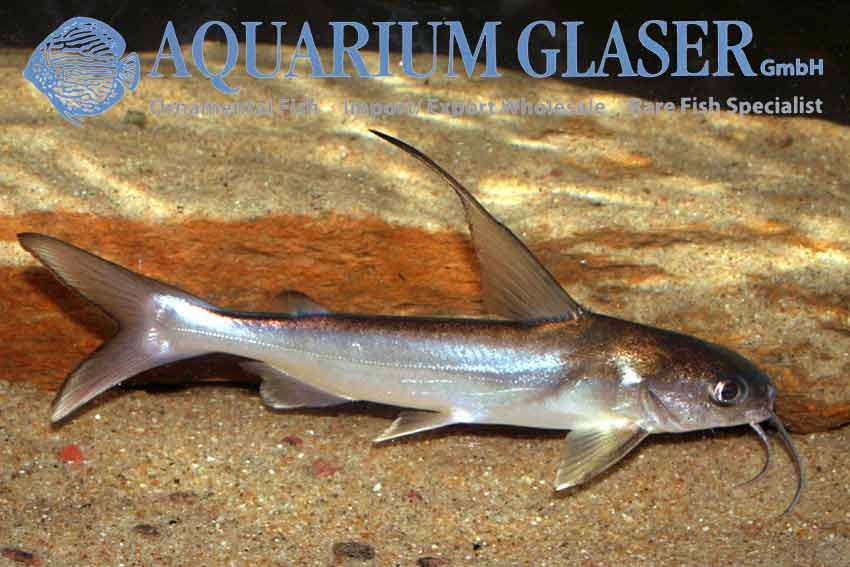