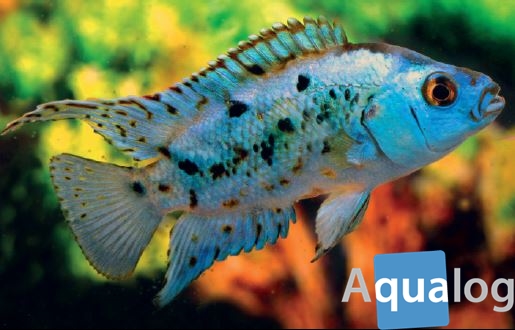 Many things that we regard as obvious are in fact very different to how they seem. One example relates to the huge variety of fish species available for maintenance in the aquarium, behind which lies a vast amount of hard work and an even larger amount of know-how. We humans don’t know by instinct how to understand a fish. We have to learn how to interpret the behavior of these creatures correctly. Otherwise there is a tendency towards anthropomorphism, and invariably, without exception, that leads us completely astray. 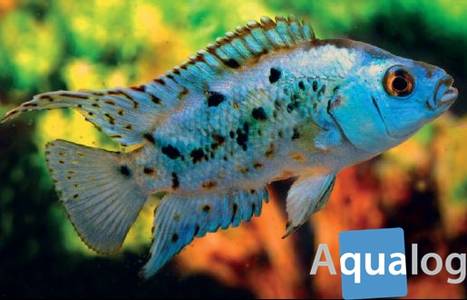 It was around 1909 that the first cichlids from Central America arrived in the aquaria of Europe and the United States. They were gorgeous fishes with fascinating brood care, but they soon acquired a reputation for being extremely aggressive and vigorous diggers. These “incorrigible villains” were given the popular name “Jack Dempsey”. Jack Dempsey, actually born William Harrison Dempsey in Colorado, was the World Heavyweight Boxing Champion from 1919 to 1926. The cichlid’s behavior was compared to his fighting style and so the fish obtained its popular name, which it still bears today, even though only a very few people now know the history behind it all.

Many names, one fish
The Jack Dempsey was initially termedCichlasoma biocellatum. This species was described in 1909 by C. T. Regan, on the basis of a specimen he had received from J. P. Arnold, a pioneer of the aquarium hobby, whose energetic importation activities were responsible for the discovery of numerous fish species. However, in this case Arnold apparently gave an incorrect collecting locality, namely “Mañaos, Rio Negro”. But there are certainly no Jack Dempseys in Brazil, and there never have been. Either Arnold must have been given an incorrect collecting locality by the seaman who brought him the fish, or there was a mix-up with a different species. Be that as it may, the fish was to be found in the literature under this name –Cichlasomabiocellatum– until the late 1980s. It was then realized thatC. biocellatumwas a synonym, that is a later, repeat, description of a species that had been described, again by Regan, asHeros octofasciatusback in 1903. Without the disastrously incorrect collecting locality Regan would undoubtedly not have committed thislapsus, as he would have known that hisC. biocellatumactually came from Central America, and would undoubtedly have compared it with the Central American cichlids known to him and not just, as it turned out, the only cichlasomine species known back then from the vicinity of Manaus, namelyCichlasoma coryphaenoides.
For around 20 years thereafter it was unclear to what genus the Jack Dempsey, whose specific name was now firmly established as “octofasciatus“, should be assigned. In fact it was clear only that it didn’t belong in the genusCichlasoma. So some people called it “Cichlasoma” (with inverted commas), others – contrary to improved knowledge –Cichlasoma(without inverted commas), and yet othersNandopsis. The problem wasn’t solved until 2007, when Schmitter-Soto erected the new genusRocioand designated the Jack Dempsey as type species. Because the genus nameRociois feminine, the species name, which is a Latin adjective, had to have its ending changed from masculine to feminine. So now, after more than a hundred years, the Jack Dempsey at last has a generally accepted scientific name, namelyRocio octofasciata.

Kin liabilty
Cichlids were already familiar at the beginning of the 20th century. The Chanchito (Australoheros facetus), a species from southern South America (Argentina, Brazil, Uruguay) that is nowadays almost completely forgotten in the hobby, was a very popular fish around the turn of the century, as the heating of aquaria was a tricky business. Because of its southerly origins the Chanchito tolerates temperatures down to just below 10°C, so that its maintenance was possible even for those aquarists unable to heat their tanks. There are in fact supposedly feral populations of the Chanchito in Spain, in the River Guadiana, although who released them, and when and why, is unknown. The popular name Chanchito means “little pig” and is very apt – it is very, very fond of digging. In addition the species can also be extremely rough towards other fishes in over-small tanks. But all this was of little concern to aquarists, so exciting was it to observe the brood care of these cichlids – the Chanchito is a typical open brooder that spawns on rocks or wood in the open, with both parents tending the eggs, larvae, and fry. But by the time the Jack Dempsey arrived this behavior was nothing new, and hence, apart from a brief period of being in fashion in the 1930s, this colorful Central American faded into the background for many decades. Quite simply, it was regarded as much too badly behaved. 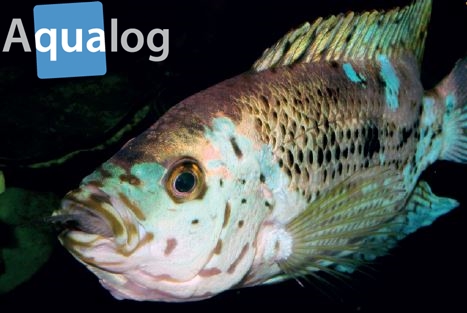 The revival
Nowadays we know that the extreme bad behavior observed in these fishes was attributable to excessively restricted living space. Rocio octofasciata can generally be kept with other species in large aquaria of around 500 liters upwards. Of course, even here the fishes will guard their offspring vigorously, but that was always the case. And the Jack Dempsey has never died out completely in the aquarium hobby. It was kept going through two World Wars, and the aquarium strains, whose precise provenance can no longer be ascertained, became considerably more peaceful through selective breeding. But the Jack Dempsey didn’t undergo a real boom again until the middle of the 1990s, when suddenly specimens with a brilliant blue sheen turned up in Argentina and were christened the “Blue Dempsey”. Initially horrendous prices were demanded – and sometimes even paid! – for these fishes. The usual myths grew up and wild rumors circulated that this fish was actually a wild form and originated from Argentina. But there are just as few Jack Dempseys in Argentina as there are in Manaus. The species occurs only on the Atlantic side of Central America (Belize, Guatemala, Honduras, and Mexico). The Blue Dempsey is simply a mutant, a genetic whim of Mother Nature, which was able to survive in the aquarium. Blue Dempseys wouldn’t stand a chance in the wild. The fry grow more slowly than their wild-colored siblings. And there are always some of those, as it has turned out that if Blue Dempseys are mated with one another they don’t produce any viable young. Hence in practice the Blue Dempsey has to be crossed with the original Jack Dempsey. This always produces a percentage of Blue Dempseys, but these need to be separated in good time from their normal-colored siblings in order to grow on optimally. 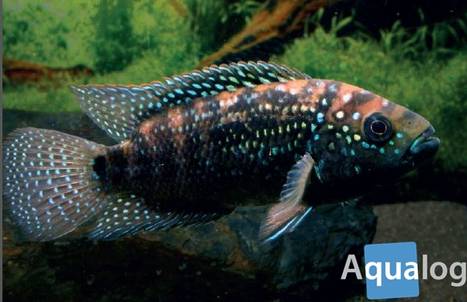 Now available from a known locality
Thanks to traveling aquarists, we now know that populations of many Central American cichlids often differ in color from river to river. As already mentioned, it is no longer possible to ascertain the provenance of the aquarium strains of the Jack Dempsey, and it may even be that different populations have unknowingly been crossed. So it is very welcome news that at least one population of the Jack Dempsey from a known location is now being traded, namely that from Chiapas in Mexico. Under no circumstances should anyone lucky enough to obtain some of these fishes cross them with other strains; they should be bred unadulterated and the locality name passed on with the offspring. 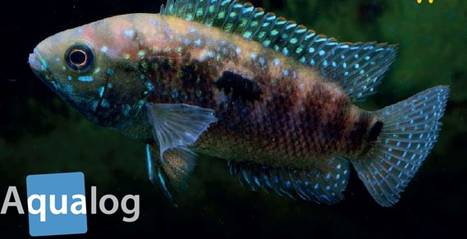 Facts, facts, and more facts
And finally, a few more hard facts about the Jack Dempsey. The species grows to a maximum of 20 cm long, but males, which are always somewhat larger than females, are already sexually mature at around 6 cm in length or an age of at least six months (sexual maturity in fishes depends on age, not size). Clutch size can easily exceed 1,000 eggs in large females. When selecting a pair it has proved beneficial to mate as large a male as possible – males can be recognized by the pointed, more prolonged dorsal, anal, and ventral fins – with a significantly smaller female. The greater the difference in size, the less likely the fishes are to quarrel, as the power ratio is obvious right from the start. In addition to a large rock as a spawning site, the breeding aquarium should have a sandy substrate as the larvae are placed in pits after hatching. The fry can takeArtemianauplii on becoming free-swimming and are very easy to rear. Water parameters play a completely subordinate role: the hardness can be between 5 and 30 °dGH, the pH between 6 and 8, the water temperature for maintenance should be between 22 and 26 °C, raised by 2-3 °C for breeding. Good water hygiene and regular partial water changes are important in view of the high metabolic rate of these fishes, which will eat any type of aquarium food, be it live, frozen, or dry. Given the huge numbers of fry it is a good idea to obtain a predatory fish to deal with the excess young. As because the Jack Dempsey has survived for so long in our aquaria, only careful selection will produce worthwhile results.
Let us hope the Jack Dempsey is still around in another 100 years time to give pleasure to future generations of aquarists! 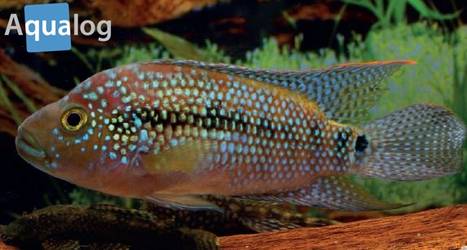