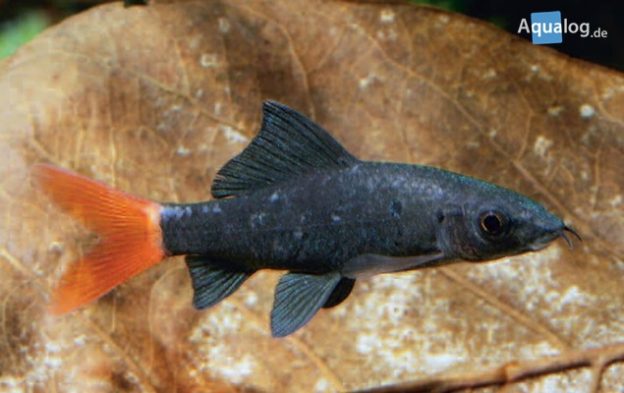 The Red-Tailed Black Shark was discovered in 1921 by MalcolmSMITH, and described under the name Labeo bicolor by Hugh M. SMITH in 1931. The type locality is a small affluent of the Menam Chao Phya (nowadays the Chao Phraya) near Paknampo in Central Thailand, where the fish was caught in a fish trap. H. M. SMITH wrote of his new species:
”This fish is not uncommon in Borapet Swamp, Central Siam, and in the streams leading therefrom. It is reported to be very common at times at Hangkraben, above Ayuthia, and occurs also in the Menam Chao Phya as far south as Bangkok. The maximum length appears to be about 12 cm. In the Paknampo region the fish is called pla song kruang (fulldress fish). The nearly uniform rich velvety black of the body and most of the fins is strikingly relieved by the bright orange color of the caudal and pectoral fins, making this one of the most beautiful of the many attractively colored cyprinoid fishes of Siam.”

By 1927 a dam had been constructed at the Bung Boraphet, (i.e. the Borapet Swamp), in order to hold back the water to form a lake and be able to catch more fishes (CHAICHANA & CHOOWAEW, 2013). A further dam was constructed in 1970, and in 1993 the height of this was increased to 24 m (SRIWONGSITANON et al., 2007). Precisely when the Red-Tailed Black Shark disappeared from the region hasn’t been documented, but the trade ist ist has relied exclusively on captive-bred fishes for many decades. Not until recently was a specimen caught again in the lower Mae Klong (KULABTONG et al, 2014), but it remains unclear whether there are still any wild populations of the Red Tailed Black Sharks in existence, and it is regarded as a critically endangered species. At present the unrestricted trade in Red-Tailed Black Sharks is the most effective and at the same time the only instrument available to prevent the species from extinction.