The pearl gourami (Trichogaster leerii) has not been bred in different sports yet, most probably because the wild type already represents one of the most beautiful species of fish at all. But now we received for the first time a golden (lutino) sport and we have to say that this variety really has a lot of charm! 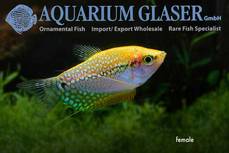 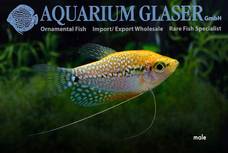 The term “rare” is – as anybody knows – much a matter of subjectivity. As far as small species of fish are concerned, “rare” can mean that they are only rarely collected, or that they are hardly ever exported or imported, respectively, or that they are hardly ever kept in aquaria. “Rare” hardly ever means in that context “there do exist only a few specimens in the world”. This would be nonsense in almost all cases, for small fish are always part of a food chain and are placed here in the very beginning. So even species that are seldom or never seen in the trade do exist in large populations of millions and millions of individuals in the natural habitat.*

Things are different in the animal we want to introduce to you today: a golden-yellow, wild collected specimen of Gnathonemus petersii, the elephant nose fish. The species itself is anything but rare. We can offer it the whole year through and for moderate prizes. There are almost anytime as many specimens available as needed. I many parts of the enormous range the species inhabits it is a common food fish for the poor, because it is abundant and cheap. But a fishermen in Nigeria can catch every day hundreds of elephant nose fish and will most probably never in his lifetime see a golden specimen. It is very likely that the fish in our fishhouse is the only live specimen of golden elephant nose fish on the planet that exists currently. And yes, we think that this can be called “rare”…

This rarity lives happily in the aquarium like any other normal elephant nose fish. It communicates with conspecifics in many ways, for elephant nose fish are comparatively intelligent fishes. A part of the pictures show our “goldie” – which is most probably a male – in company of a normally coloured female. Both are about 12 cm long.

*For the purists among our readers: yes, of course, we know about the types of killifish, loach, and cave fish that inhabit only a single spring or a single hole in the ground. And of course we know that there can exist only a few hundered specimens per population due to the extremely small habitat. But these are really rare exceptions from the rule and do not falsify the basic statement.

The Emperor tetra (Nematobrycon palmeri) belongs to the most popular species of tetra at all. The fish found in the ornamental fish trade are almost exclusively bred ones. The species originates from Colombia. Wild collected specimens can be seen here:http://www.aquariumglaser.de/en/archiv.php?news_id=1146

Due to the great demand the breeders usually sell their fish at a comparatively small size already. But currently we received really fully grown specimens which have a total length of almost 5 cm: These fish are simply wonderful! 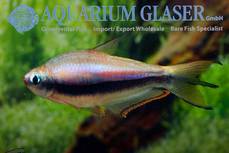 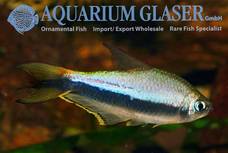 There are two species of catfish in South America that look like siblings: Leiarus marmoratus (called “Achara” by the natives) and Leiarius (formerly: Perrunichthys) perruno. Both species attain a length of about 60 cm, have the very same leopard pattern and the long, ringed whiskers. But there does exist an easily recognizable difference: Leiarius marmoratus has 10-11 rays in the dorsal fin, L. perruno only 8. The fish usually have the dorsal fin erected. So it is pretty easy to count the finrays on a sharp photo.

Due to the attractive pattern and the peaceful nature of the fish (any tankmate that does not fit as food will be ignored), acharas are much sought for by enthusiasts that love big fish. However, they are only rarely available on the ornamental fish market. Currently we have a number of very charming youngsters from Peru in stock, which are 4-6 cm long.

Apistogramma baenschi from Peru is for sure among the most beautiful species of dwarf cichlid. The male combines splendid colours (especially the wonderful caudal fin) with a fantastic high dorsal fin and the female is also a real eyecatcher due to its unique tiger pattern. Currently we have both wild collected and bred specimens in stock (the photos are taken from our bred specimens).